Face with the European flag

“From war to peace:
a European tale”

A Nobel lecture by the President
of the European Council
Herman Van Rompuy.

Acceptance speech for The Nobel Peace Price 2012
given to the European Union. Oslo 10 December 2012

Your Majesties,
Your Royal Highnesses,
Heads of State and Government,
Members of the Norwegian Nobel Committee,
Excellencies,
Ladies and Gentlemen,

It is with humility and gratitude that we stand here together, to receive this award on behalf of the European Union.
At a time of uncertainty, this day reminds people across Europe and the world of the Union’s fundamental purpose: to further the fraternity between European nations, now and in the future.
It is our work today.
It has been the work of generations before us.
And it will be the work of generations after us.
Here in Oslo, I want to pay homage to all the Europeans who dreamt of a continent at peace with itself, and to all those who day by day make this dream a reality.
This award belongs to them.

War is as old as Europe. Our continent bears the scars of spears and swords, canons and guns, trenches and tanks, and more.
The tragedy of it all resonates in the words of Herodotus, 25 centuries ago: “In Peace, Sons bury their Fathers. In War, Fathers bury their Sons.”
Yet, … after two terrible wars engulfed the continent and the world with it, … finally lasting peace came to Europe.
In those grey days, its cities were in ruins, the hearts of many still simmering with mourning and resentment. How difficult it then seemed, as Winston Churchill said, “to regain the simple joys and hopes that make life worth living”.
As a child born in Belgium just after the war, I heard the stories first-hand.
My grandmother spoke about the Great War.
In 1940, my father, then seventeen, had to dig his own grave. He got away; otherwise I would not be here today.
So what a bold bet it was, for Europe’s Founders, to say, yes, we can break this endless cycle of violence, we can stop the logic of vengeance, we can build a brighter future, together. What power of the imagination. 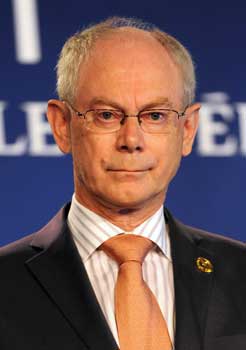 The President
of the European Council
Herman Van Rompuy

Of course, peace might have come to Europe without the Union. Maybe. We will never know. But it would never have been of the same quality. A lasting peace, not a frosty cease-fire.
To me, what makes it so special, is reconciliation.
In politics as in life, reconciliation is the most difficult thing. It goes beyond forgiving and forgetting, or simply turning the page.
To think of what France and Germany had gone through…, and then take this step… Signing a Treaty of Friendship… Each time I hear these words – Freundschaft, Amitié –, I am moved. They are private words, not for treaties between nations. But the will to not let history repeat itself, to do something radically new, was so strong that new words had to be found.
For people Europe was a promise, Europe equalled hope.
When Konrad Adenauer came to Paris to conclude the Coal and Steel Treaty, in 1951, one evening he found a gift waiting at his hotel. It was a war medal, une Croix de Guerre, that had belonged to a French soldier. His daughter, a young student, had left it with a little note for the Chancellor, as a gesture of reconciliation and hope.
I can see many other stirring images before me.
Leaders of six States assembled to open a new future, in Rome, città eterna…
Willy Brandt kneeling down in Warsaw.
The dockers of Gdansk, at the gates of their shipyard.
Mitterrand and Kohl hand in hand.
Two million people linking Tallinn to Riga to Vilnius in a human chain, in 1989.
These moments healed Europe.
But symbolic gestures alone cannot cement peace.
This is where the European Union’s “secret weapon” comes into play: an unrivalled way of binding our interests so tightly that war becomes materially impossible. Through constant negotiations, on ever more topics, between ever more countries. It’s the golden rule of Jean Monnet: “Mieux vaut se disputer autour d’une table que sur un champ de bataille.” (“Better fight around a table than on a battle-field.”)
If I had to explain it to Alfred Nobel, I would say: not just a peace congress, a perpetual peace congress!
Admittedly, some aspects can be puzzling, and not only to outsiders.
Ministers from landlocked countries passionately discussing fish-quotas.
Europarlementarians from Scandinavia debating the price of olive oil.
The Union has perfected the art of compromise. No drama of victory or defeat, but ensuring all countries emerge victorious from talks. For this, boring politics is only a small price to pay…

Ladies and Gentlemen,
It worked.
Peace is now self-evident.
War has become inconceivable.
Yet ‘inconceivable’ does not mean ‘impossible’.
And that is why we are gathered here today.
Europe must keep its promise of peace.
I believe this is still our Union’s ultimate purpose.
But Europe can no longer rely on this promise alone to inspire citizens. In a way, it’s a good thing; war-time memories are fading.
Even if not yet everywhere.
Soviet rule over Eastern Europe ended just two decades ago.
Horrendous massacres took place in the Balkans shortly after. The children born at the time of Srebrenica will only turn eighteen next year.
But they already have little brothers and sisters born after that war: the first real post-war generation of Europe. This must remain so.
Presidents, Prime Ministers,
Excellencies,
So, where there was war, there is now peace. But another historic task now lies ahead of us: keeping peace where there is peace. After all, history is not a novel, a book we can close after a Happy Ending: we remain fully responsible for what is yet to come.
This couldn’t be more clear than it is today, when we are hit by the worst economic crisis in two generations, causing great hardship among our people, and putting the political bonds of our Union to the test.
Parents struggling to make ends meet, workers recently laid off, students who fear that, however hard they try, they won’t get that first job: when they think about Europe, peace is not the first thing that comes to mind…
When prosperity and employment, the bedrock of our societies, appear threatened, it is natural to see a hardening of hearts, the narrowing of interests, even the return of long-forgotten fault-lines and stereotypes. For some, not only joint decisions, but the very fact of deciding jointly, may come into doubt.
And while we must keep a sense of proportion – even such tensions don’t take us back to the darkness of the past , the test Europe is currently facing is real.
If I can borrow the words of Abraham Lincoln at the time of another continental test, what is being assessed today is “whether that Union, or any Union so conceived and so dedicated, can long endure”.
We answer with our deeds, confident we will succeed. We are working very hard to overcome the difficulties, to restore growth and jobs.
There is of course sheer necessity. But there is more that guides us: the will to remain masters of our own destiny, a sense of togetherness, and in a way… speaking to us from the centuries … the idea of Europa itself.
The presence of so many European leaders here today underlines our common conviction: that we will come out of this together, and stronger. Strong enough in the world to defend our interests and promote our values.
We all work to leave a better Europe for the children of today and those of tomorrow. So that, later, others might turn and judge: that generation, ours, preserved the promise of Europe.
Today’s youth is already living in a new world. For them Europe is a daily reality. Not the constraint of being in the same boat. No, the richness of being able to freely share, travel and exchange. To share and shape a continent, experiences, a future.
Excellencies,
Ladies & Gentlemen,
Our continent, risen from the ashes after 1945 and united in 1989, has a great capacity to reinvent itself. It is to the next generations to take this common adventure further. I hope they will seize this responsibility with pride. And that they will be able to say, as we here today: Ich bin ein Europäer. Je suis fier d’être européen. I am proud to be European.