The vast county of Finnmark lies in the extreme northern reach of Norway. It is also where east meets west – it’s easternmost town, Vardo, is located farther east than Istanbul. Despite the harsh conditions, Finnmark has been inhabited by humans for millenia. In fact, the oldest traces of human habitation in Scandinavia – from around 8,000 BCE, are found in Finnmark. Humans are still thriving in this remote corner of the planet. 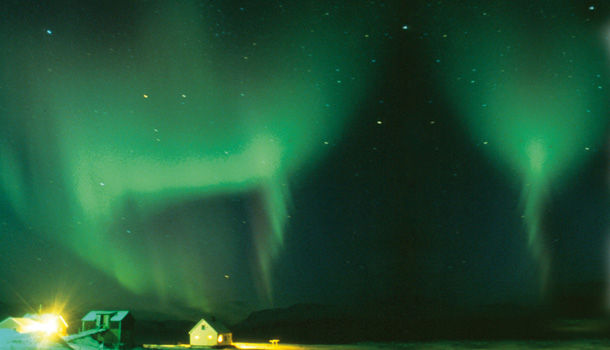 For Seasonal Affective Disorder sufferers, a journey to Finnmark in the depths winter might seem like suicide on ice. However, working on the principle fending off packs of hungry wolves in -20°C blizzards might actually make wintertime UK seem like a honeymoon in The Seychelles, I flew up to Alta in Norway’s northerly wilderness, and Finnmark’s largest town, for an SAS-style, Arctic-manoeuvres approach to fighting the winter blues.

One of the many misconceptions about Lapland is that for six months of the year it plunges into perpetual darkness. Actually, by early February, the region enjoys seven hours of sunlight. At 10:00 am on my first day, I was driving through a dazzling, sunlit landscape of steep canyons and craggy mountains. I was en route to Alta’s famous Igloo Ice Hotel for a snowmobiling safari across the Finnmark plateau. Once our group was kitted out in Michelin Man-shaped thermal suits, Pår – our tall, blue-eyed guide – went through the snowmobile instructions with us. As a non-driver, I assumed I’d be merely a passenger and didn’t listen to a word, so I was a bit shocked when I was corralled into the driving seat and told with a wink that police never check licences here. 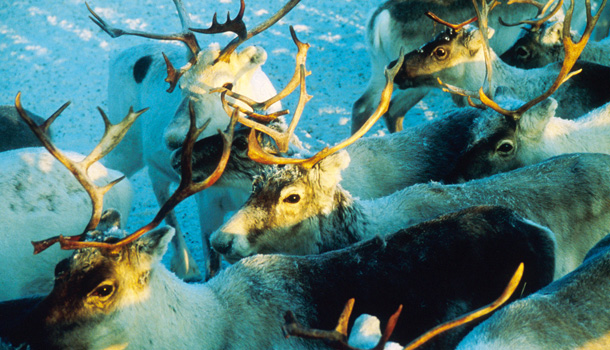 “Does this make it go forward?” I nervously asked, as I turned the right handlebar and screeched off at breakneck speed straight into a snowdrift. After a couple of minutes, I’d mastered the technique and was soon trailing somewhat erratically behind the group, but nevertheless feeling immensely exhilarated at my first driving experience. The bleak primeval landscape of ice-shattered mountains topped by storm clouds, tinged salmon-pink by the low-lying sun, was truly humbling. This really did feel like Europe’s last great wilderness. 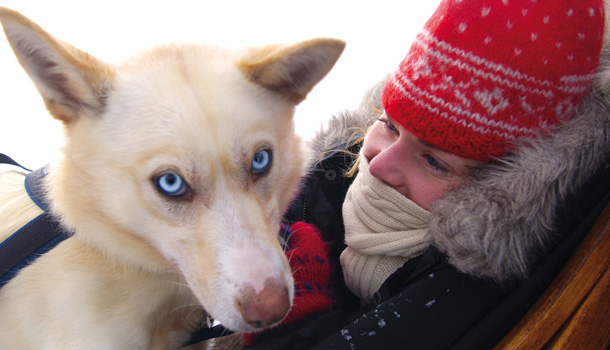 cosy, en suite experience in which the laws of physics miraculously go into

reverse. If you think about it, if the hotel was kept at a balmy 25°C, your ice loo would soon be a puddle in the tundra. In reality, the hotel is a glacial work of art

and is built afresh each year. The artistic theme when I visited was “Wildlife

of the Valley.” Walking into the igloo-like structure, I felt like Edmund entering the White Witch’s castle, as ice bears, reindeer and lynx sparkled mysteriously in the soft light. On either side of the sculpture hall, corridors lead to tiny, bare, monastic-style cells in which you sleep on a reindeer skin-covered block of ice in a teeth-chattering -6°C. It’s not for those suffering from weak bladders and if you need a pee at 3:00 am, you’ll need to trudge across the snow to the permanent main buildings. Many guests never return and sneakily sleep the rest of the night in the sauna! 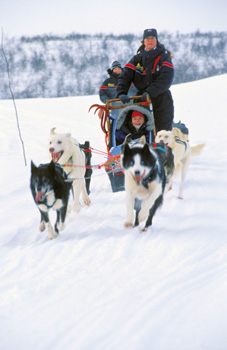 Earlier in the evening, somebody rushed into the hotel foyer and announced that the Northern Lights had started. I’m sure even an earthquake couldn’t have emptied the hotel any quicker. Grabbing some kick sledges, we sped over the icy grounds to get a clearer view of the sky. At first, all we could see were a couple of what looked like cirrus clouds. However, after a few minutes, we were soon gasping like children at a fireworks display as the “clouds” began to glow and pulsate, and then spewed out billowing curtains of shimmering green light. Then, in a dazzling display of pyrotechnics, worthy of Sydney Harbour on New Year’s Eve, the light curtains began pulsating in rippling bands of pink and purple. 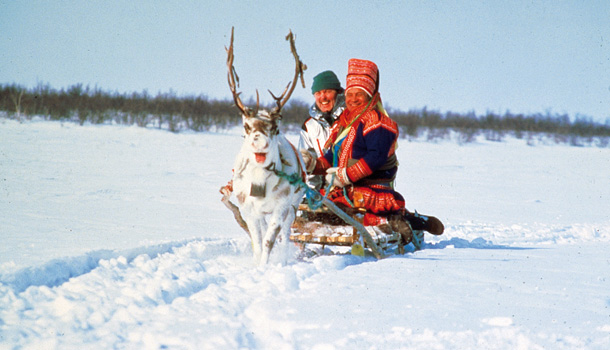 Next morning, having brushed away a pelt of reindeer fur that had

stuck to my frozen lips overnight, we drove inland to Karasjok, the capital

town of the indigenous Sami people, for a day’s husky-sledging and reindeer-sledging. We were greeted at Engholm Husky Tours by Sven, an intrepid husky racer, well used to competing in the Canadian and Siberian wildernesses. In between races, Sven built the farm and a series of Hansel-and-Gretel style guest cabins himself. Sensing playtime, the huskies were straining at their leashes as, one by one, our sledges lurched forward and hurtled down a slope towards a wide, frozen riverbed. The sense of freedom I felt speeding along the ice, listening to the wolf-like yaps of the huskies was almost atavistic and really got my Ice Age genes stirring. The huskies are used to a cuddle after their exertions, but, even in the animal world, looks count. An aquamarine-eyed stunner, well accustomed to the paparazzi, was soon pouting at the flashing cameras. 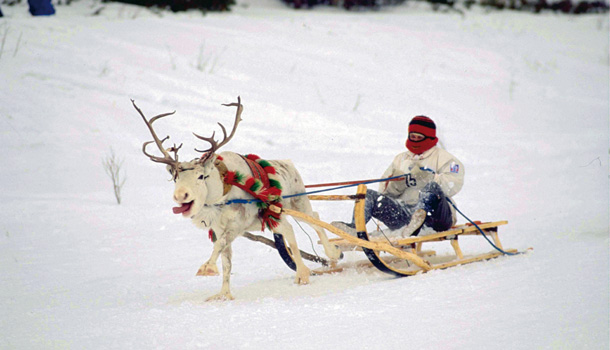 Having said goodbye to our blue-eyed cover boy, we made our way over to a Sami reindeer enclosure where we were met by Anna, the family matriarch, resplendent in a traditional scarlet-and-gold costume. After taking a short spin on a sledge pulled by an adorable, doe-eyed miniature reindeer, Anna led us into a lavu, the traditional Sami wigwam. Arranging herself on the birch-twig carpet and prodding a flickering fire, she began regaling us with tales of the Sami spirits and even sang us a jolk, the traditional chant sung in memory of departed ancestors and separated love ones. We soon resembled participants in a Victorian séance, staring wide-eyed through the flames at a bubbling coffee pot as if it might explode at any moment in clouds of ectoplasm. I felt a deep respect for Anna and was sure that this last vestige of European nomadic culture was safe in her capable hands.

SAS flies direct to Oslo from most European captals and operates daily connecting flights to Alta. For more information go to www.flysas.com