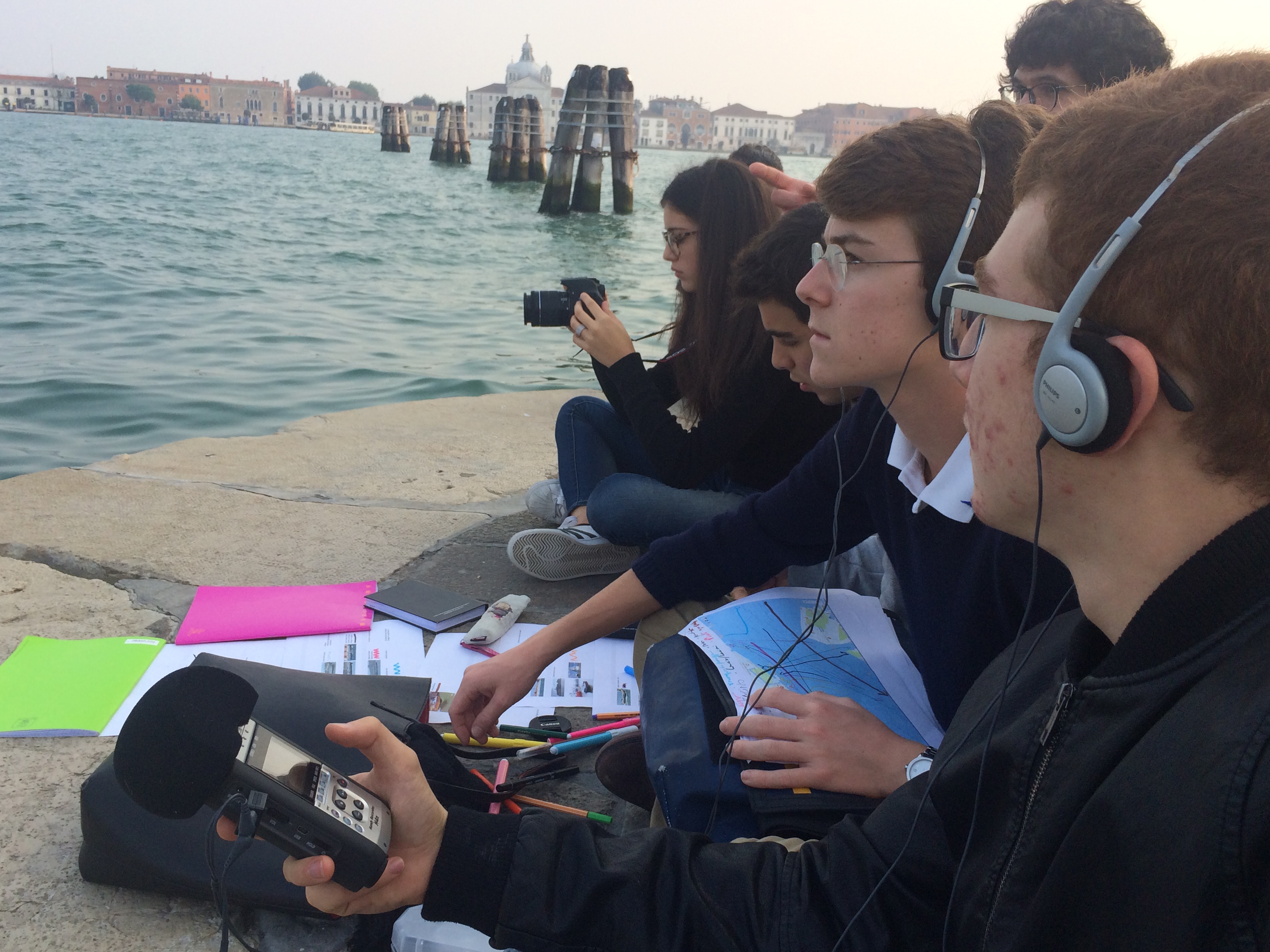 Suonifreschi – or Fresh Sound – is a cultural association based in Venice, Italy, that believes that at the centre of music composition are the sounds produced by every day life. It takes its queue from Vedutismo, a movement born in the 1700’s, that saw painters like Canaletto put on canvas landscapes that looked real to the touch. In fact, Vedutismo is said to be the forerunner of photography, capturing in an eternal moment life going by. This is the ethos of Suonifreschi.

Keeping up with this Venitian tradition, Stefano Luca director of Suonifreschi, talks to our chief editor Massimo Gava about the project he launched with Palazzo Grassi and Punta della Dogana to bring younger people closer to art. 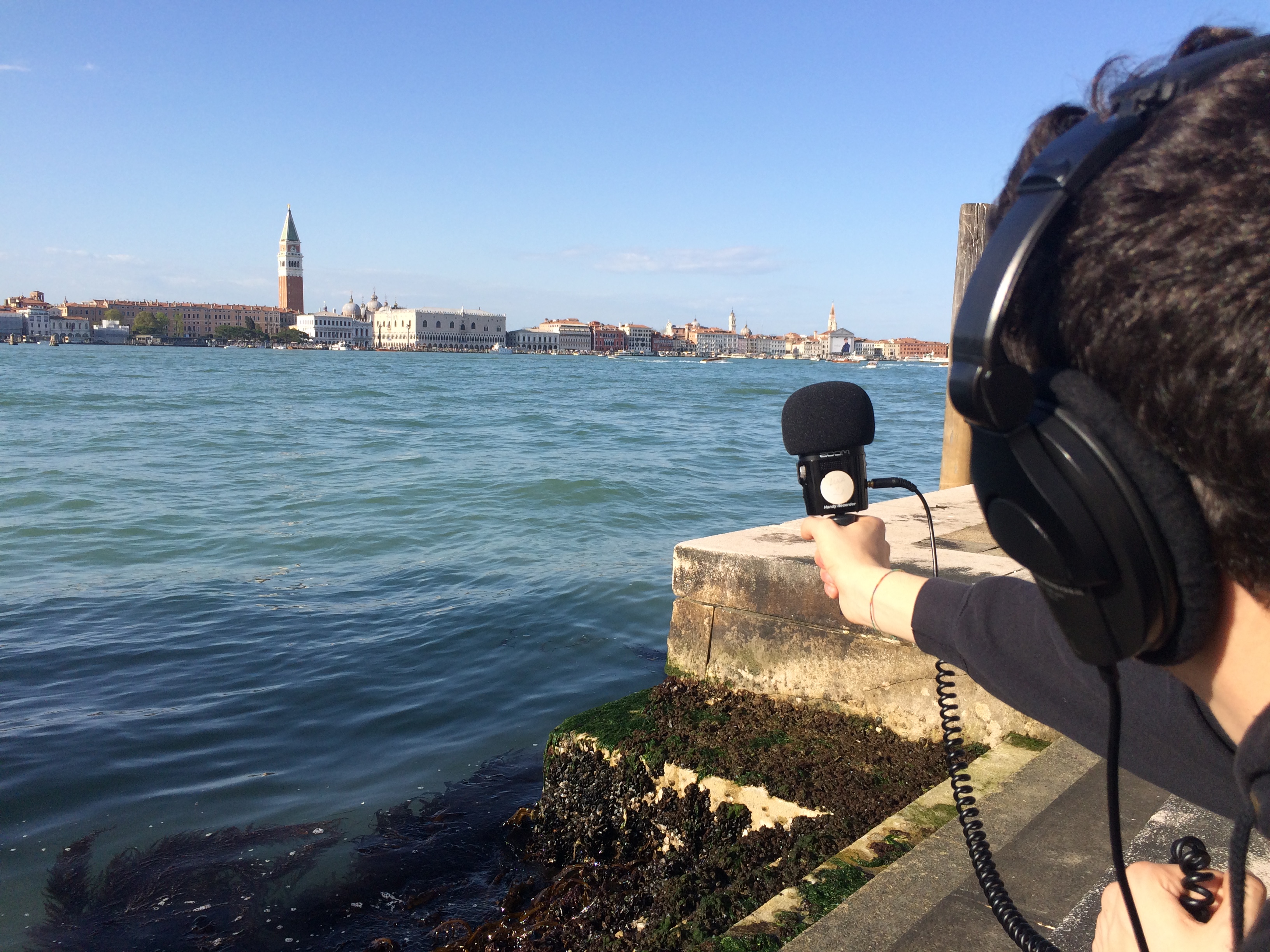 “Suonifreschi,” or fresh sounds, is the cultural association that trains children and adults how to connect with the natural sounds of their surrounding environment so they can become better sound listeners, designers, musicians and composers. Who can better describe this amazing work than Stefano Luca, the director, that, together with his association, has brought landascape sounding to the making of music – where the sounds of the enviornment becomes the main component to explore and compose with.

“The Venitian landscape, with the total absence of car traffic, makes Venice the only city in the world where you could have high definition in sound, therefore making it is easier to listen to other sounds and create new compositions with them,” said Luca. You can tell he is completely bessoted with his town – Venice. Who wouldn’t be?

In the 1700’s, Vedutismo, or landascape painting art, saw painters like Marco Ricci, Giuseppe Zais, Bernardo Bellotto and the most famouus of all, Canaletto, depicting landscape as a main subject, moving away from human action as the traditional subject. The city is the best for landscape sounding – where musicians can analyze the musical sounds of the place and build a composition from them. 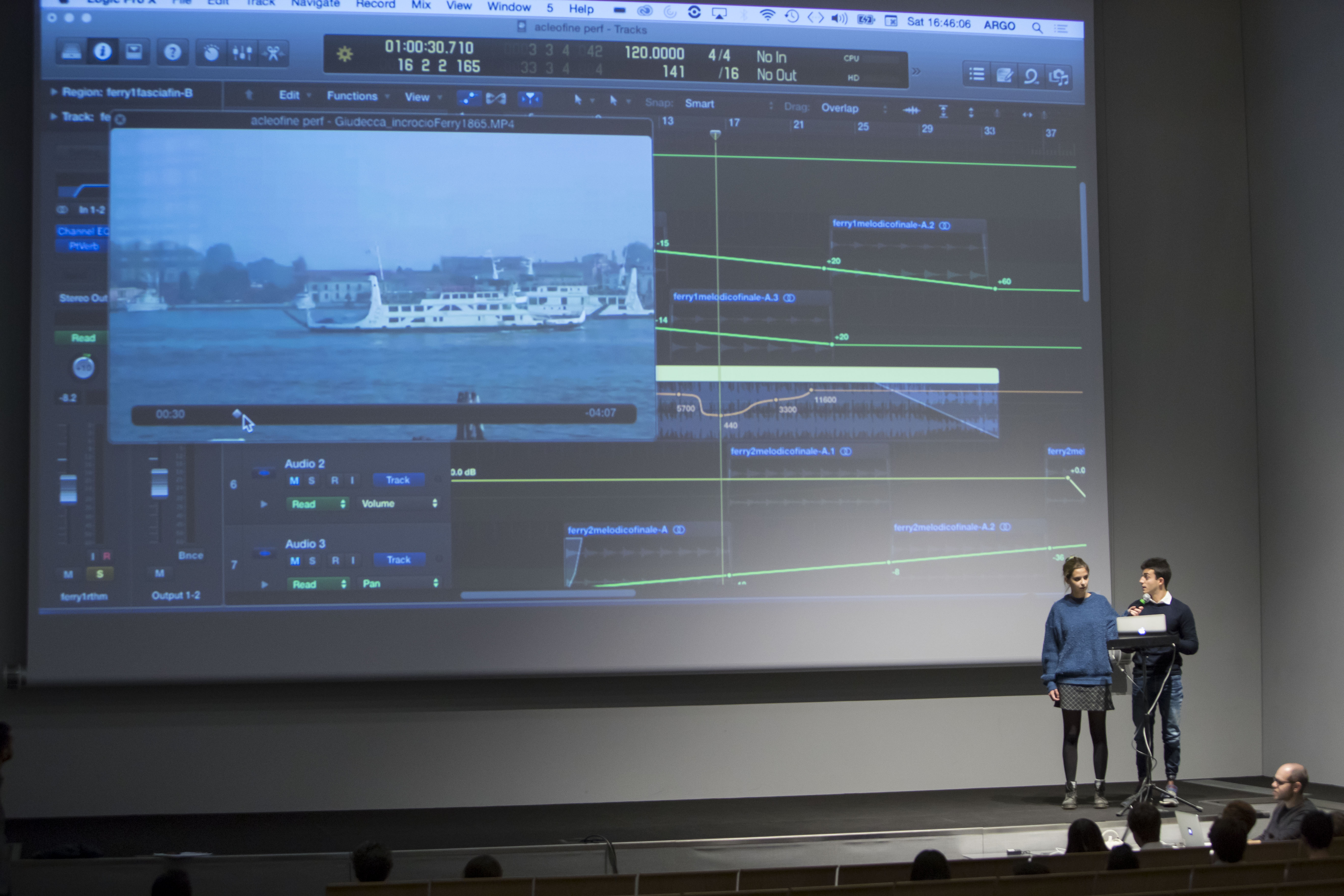 In 1913, Luigi Russolo introduced his futurist manifiesto “L’Arte dei Rumori” – the art of noise. It is considered one of the most important and influential texts in 20th-century musical aesthetics.

Russolo argued that the human ear became used to the speed, energy, and noise of the urban industrial soundscape. This new sonic palette required a new approach to musical instrumentation and composition. He proposed a number of conclusions about how electronics and other technology will allow futurist musicians to “substitute for the limited variety of timbres that the orchestra possesses today the infinite variety of timbres in noises, reproduced with appropriate mechanisms.” 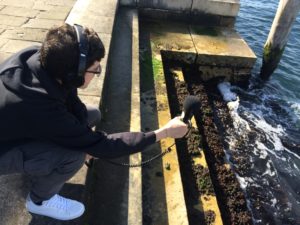 Following in the footsteps of Russolo, in 1948, Pierre Schaeffer, the French, writer, broadcaster, engineer, musicologist and acoustician, became one of the most influential experimental, electroacoustic composers. He was the first to utilize a number of contemporary recordings and sampling techniques that are now used worldwide by nearly all record production companies. His collaborative endeavors are considered milestones in the histories of eletronic and experimental music. 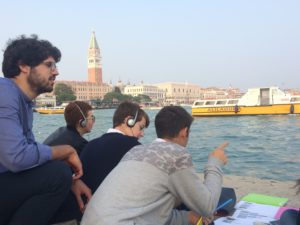 On the other side of the Atlantic, John Milton Cage Jr was a pioneer of indeterminacy in music, electroacustic music and non standard use of musical instruments and one of the leading figures of the post-war avant-garde .

In honor of this rich history, Suonifreschi studies the relation between the environment and the sound, using the environment as a resource to tap into and sound material to be turned into music composition. In this way we have an educational process where the partecipants enhance their capacity to listen to what happens around them and become better sound designers.

Think if it was possibe to record the sounds of the street of Venice at the splendor of the Serenissmia Republic. We would have a better idea of how people lived in those days. Now project yourself into a not so distant future when every single engine will be electric, all the noise that is currently happening in Venice will not be heard anymore, the daily acustic identity of the place you are used to will be a different one.

It is almost like talking about the soundtrack in a movie with a difference, all the sounds in the film are added after to increase and generate specific emotion, added to a specific dialogue that the sound designer will paste in post production. In the case of Vedute Sonore, the sound designer will look for the biological sound of the place, a sort of Genius Loci – the protective spirit of the place – to start a composition with. This is the essence of Vedute Sonore. 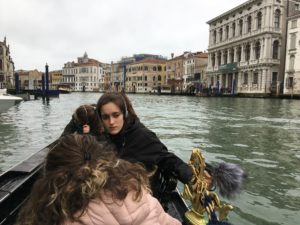 Suoni Freschi partnered with Palazzo Grassi and Punta della Dogana, two of the most important contemporary art museums of the city, owned by French entreprenour Francois Pinault, where he exibits his private collection of art. This union crafted two projects – Belsentire ( beautiful listening) and Promenande Acoustique, with the aim of creating the Veduta Sonora of Punta della Venice’s old customs buildings, and the second for Palazzo Grassi.

“ Punta della dogana is where the giudecca’s canal meet the grand canal and across you see Palazzo Ducale and San Marco Square. From this Belvedere spot to Belsentire, the step is just natural, so here we have the participants in these two projects, mainly students from 16 to 19 years old,” Stefano explains that the students view and record the traffic taking place on the water, analyze the characteristcic of the boats crossing the canals and record their sound. 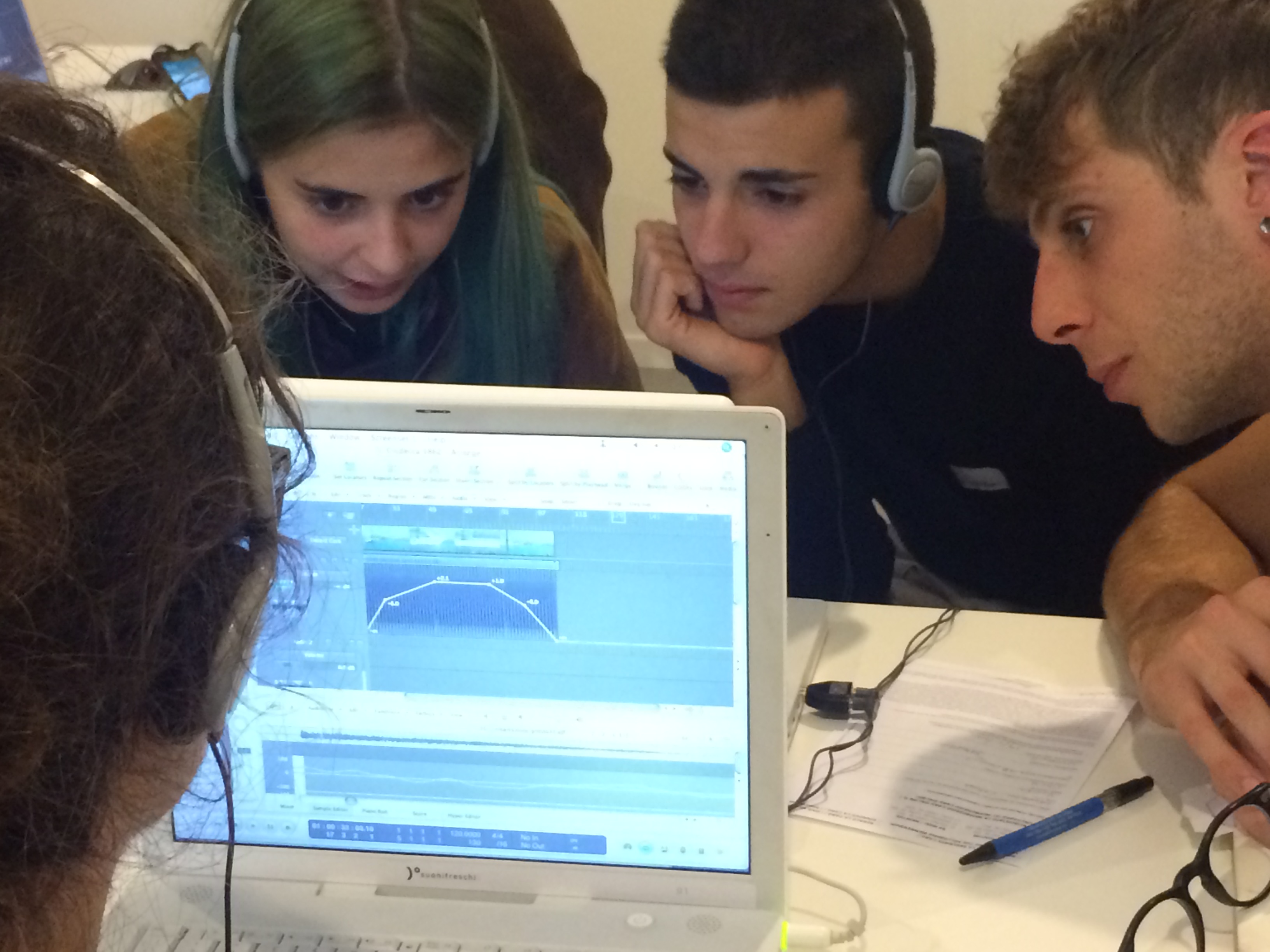 “Then in the laboratory, the students enhance the characteristics of each vessel to create a sound accordingly. So, to give you an example, the big cruise ships read like a giant sea monster. So it translates into a heavy and dramatic metallic sound, created to illustrate the worries of the Venetian population. On the other hand, a fast and small water taxi is seen as a mosquito, so the sounds created are as acute as a violin cord,” he said.

Luca moves on to explain the ethos of the second project – the Promenade Acoustique. 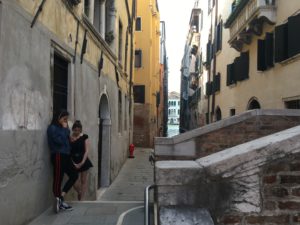 “The students travel the streets of Venice grabbing the sound as if they are following three different imaginary actors. One is a writer, the second a visitor and the third is guard. All of them have to reach Palazzo Grassi and narrate their experience,” said Luca. They record the sounds in public spaces – streets, fields and canals. Then, in the laboratory, the students select the material and intergrate the vocal sounds. The result, as Stefano explains, is similar to a radio drama . 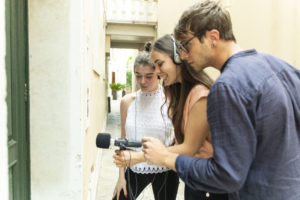 “Our intention with this projects is, apart from giving the students work experience in sound, designing and in composition, to bring a younger generation closer to the art world.” said Alexis Sornin, who together with his assistant Ester Baruffaldi, is responsible for the educational and editorial activities of the museums. The result has been so extraordinary, so amazing, that they want it to become a permanent feature for the visitors of both Palazzo Grassi and Punta delle Dogana. 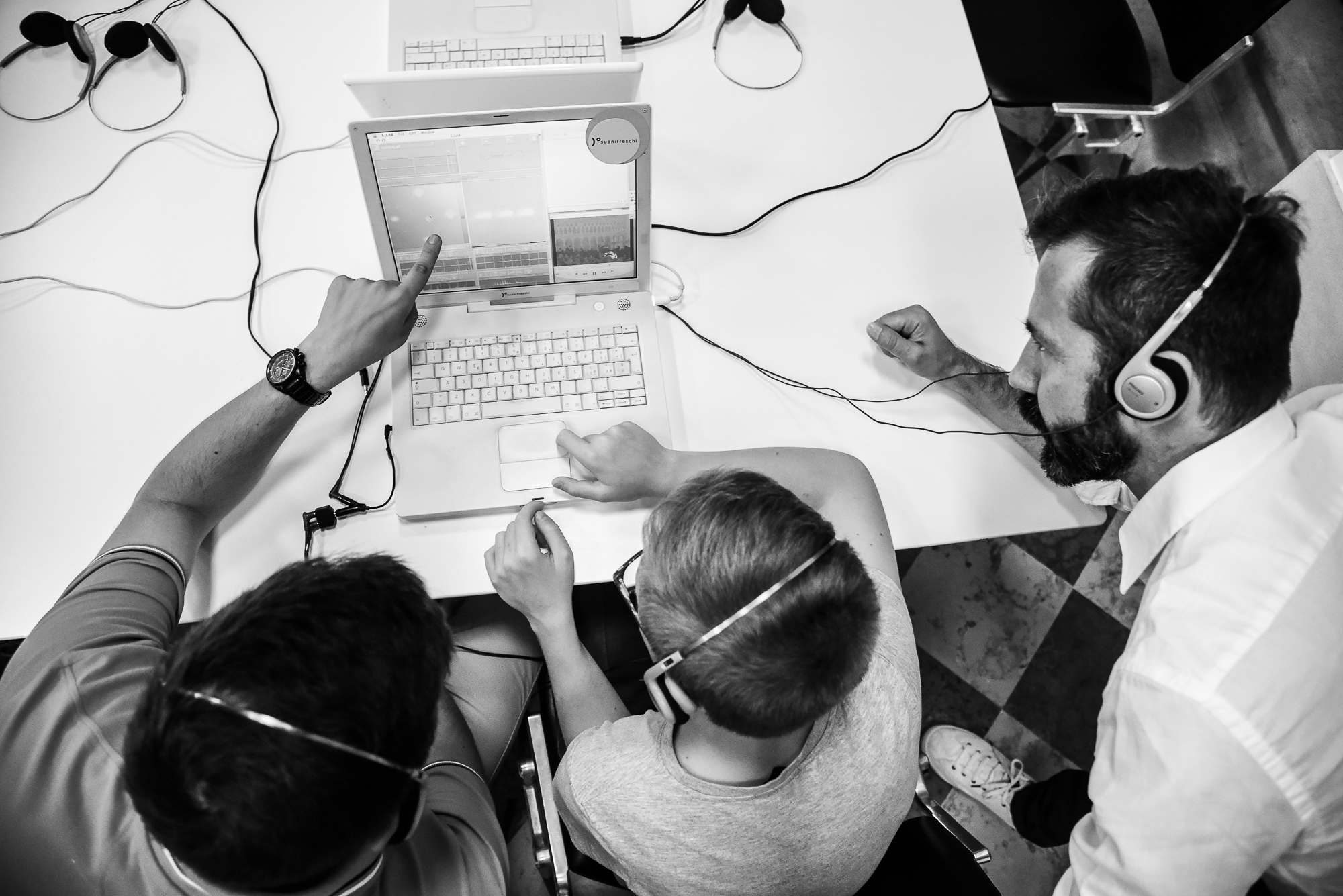