B PROUD FOR UK!

B PROUD FOR UK! 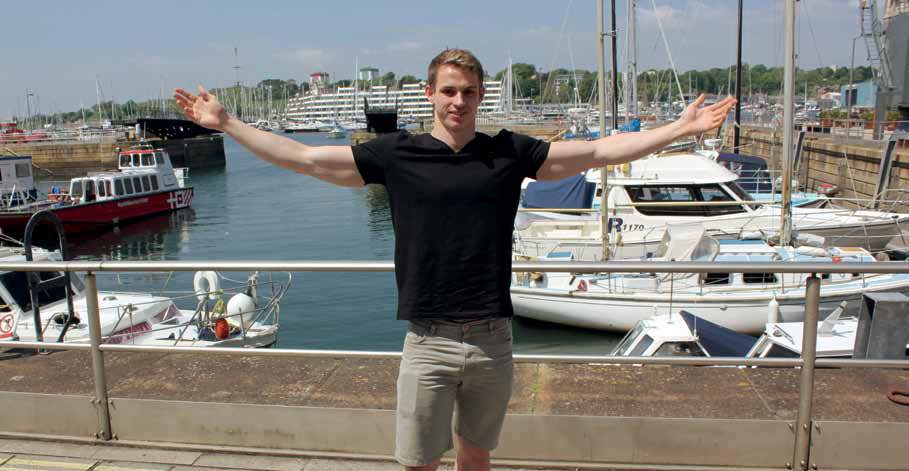 Ben Proud, a 21-year-old British swimmer and record holder, talks to Massimo Gava about his diet and training before setting off for the Rio Olympics

Fitting an interview into the schedule of Benjamin Proud these days is worse than trying to get an audience with the Pope. At the time of our meeting, Ben had just finished competing in the Euro-pean Championships in London. He is then on his way to Barcelona for the Mare Nostrum Championship, next he is straight off to join the U.K. training camp in Rome, which lasts for two weeks before the whole team flies out to Brazil for the ultimate test of any athlete’s abilities, the Olympics, where dreams and reputations are made. 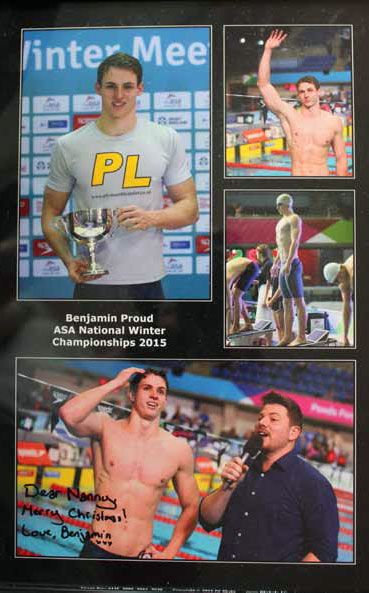 The rising star, who is a towering 1.91 metres (6ft 3 inches) and an impressive 93 kg (14 stone 9 pounds) has just finished a gym session with his coach, aimed, as he tells me, at maximising and optimising his muscle strength, but now he needs to go and eat straightaway, of course. “Of course,” I say, but I am fretting as to where to go because I don’t know much about Plymouth, where I have had to come to in order to get this precious interview, as well as being worried he might need to eat just a certain type of food. But Ben immediately with his natural charm puts me out of my misery and announces, (somewhat to my surprise), “I know a place where they make a good pizza, near the harbour in this really nice bakery”. As we wait at our table for our orders to be served, I talk to him about his diet and immediately query his choice of having a pizza! Ben tells me that as long as he can keep his calorie intake around 6,000 he can eat most things, and pizza is one of his favourites. “A good pizza, though”, he stresses. He is very conscious of what kind of food he eats and avoids junk food at any cost. He gives us an indication of his daily intake.
“My diet routine normally consists more or less of something along the lines of:

That’s what I generally eat on a normal day, but my diet does alter slightly closer to competitions.” 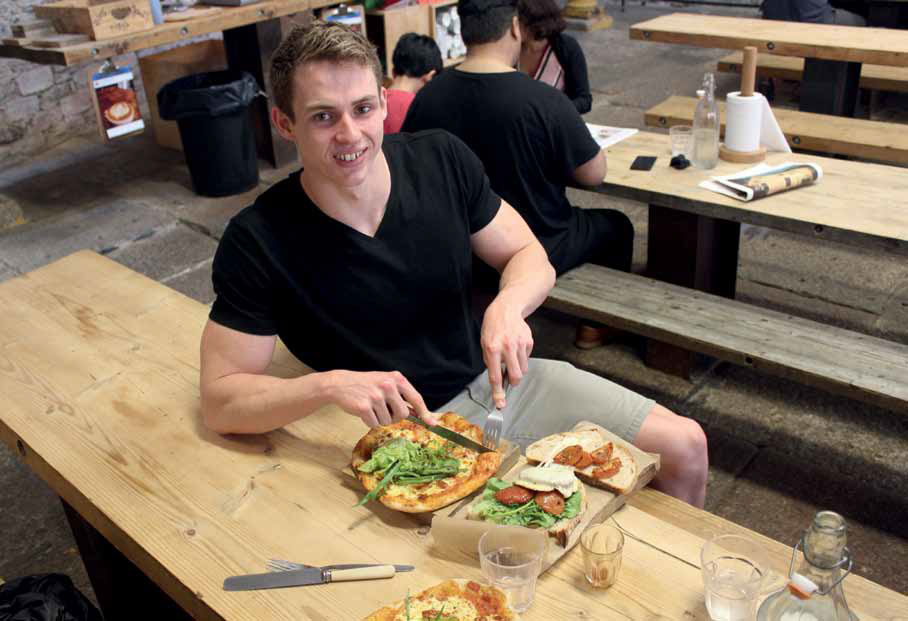 Ben is a sprint swimmer and his main events are the 50m & 100m freestyle – and the 50m butterfly, which particular race, alas, does not figure in the Olympics. “We are the lazy ones” he says, attempting a smile because his main focus is still the lovely pizza he’s downing. “Why lazy?”, I ask. “Because our training is based on producing that explosive maximum effort over a short distance while the others who swim long distance have to build up a strength that keeps them going all the way through to the end.”

Ben was living in Malaysia when he took part in a local tournament at the age of 14. His family could see his potential and thought it would be wise to send him back to the U.K., where the facilities and sports knowledge were a lot better. So they looked at several colleges and as soon as Jon Rudd at Plymouth College saw Benjamin’s times for his events at his age, he instantly offered him a swimming scholarship.

Ben had his dream come true, loved swimming more than anything, so he moved to the U.K. in August 2011 after he had finished his GCSEs at the Alice Smith School Kuala Lumpur, just a month before his 17th birthday. His mother Sally flew across with him to help him settle in initially. 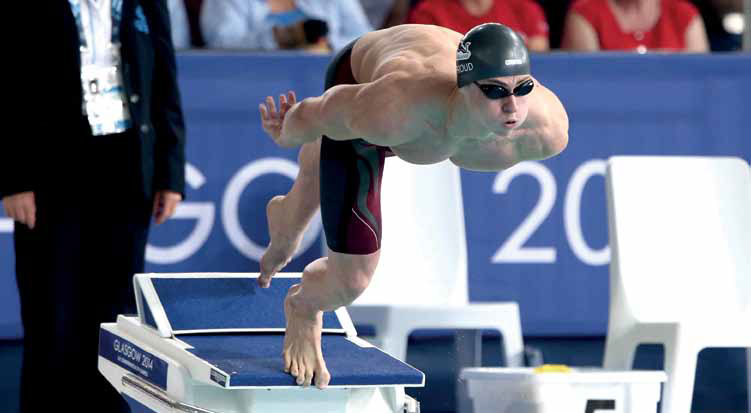 At the beginning it was all very exciting but then the tough training routine and the change of life style, moving from a very sunny country to Devon, started to take its toll. There was a moment when Ben was unsure he was cut out for this life. He expressed his concerns to his mother and brother Oliver, who, by then, had also flown over to Britain to attend university in Leeds. The whole family at that point came to the U.K. to offer their help. His mother rented a flat and moved down to Plymouth while his brother commuted at the weekend. With his family now near him, Ben blossomed and his performances in the pool were registering better and better times, to the point that he carved his name in the history books later that year as he blew away Mark Foster’s 10-year-old British 50m butterfly record. And then he became the fastest 18 year-old in the world competing in the 50m butterfly, as well as being the Commonwealth Gold Medallist in the 50m butterfly and 50m freestyle events. The success did not stop there, and in the most recent European Championships in London he won bronzes in the 50m butterfly and in the 50m freestyle.

But what’s it like being a 22 year-old athlete? Doesn’t he miss all the things a 22 year-old likes doing, I wonder?
Ben is pretty cool talking about it all. “Yeah, sometimes, instead of going out with my friends, I need to rest to recover but then again my group of friends are all athletes like me so we meet up at my place or at somebody else’s and watch movies, natter and have a laugh, of course – we aren’t going to go bungee jumping or anything dangerous like that where we could get a bad injury, but we can live a normal life like anybody else.” But you also have to be careful about of the stuff you eat and drink – and what you take when you get sick, don’t you?
“Yes, the British Swimming Federation issues us with a list of substances we can and not take, because if we accidentally take them they can show up in your doping test. They are very strict about it all, so energy drinks or any kind of over-the-counter medicine are to be avoided. We have a team of docs here who tell us what to take, if we ever get sick.”

What amazes me about Ben is how calm and relaxed he is all the time. I wonder what his trick is to keep so cool, to cope with the pressure and the increasing expectations. “I just play my guitar,” he simply says. But what are you thinking at that moment when you are on that block and ready just before the starting beep when you have all that noise around you, how do you manage to concentrate?
“I’ve learnt to block it all out and focus on my goal, that is, doing the best I can and even better, as my mind and body have to function at their best to get that result I’ve worked so hard to achieve; but remind myself – it’s still a sport and sometimes no matter how good I can be, there are other people who, on the day, will be better than you, so sometimes I make the podium, other times it doesn’t happen. But I want people to see that in eve-ry race I do I give the very best I could have, for me personally, for my team and for the country I re-present.” 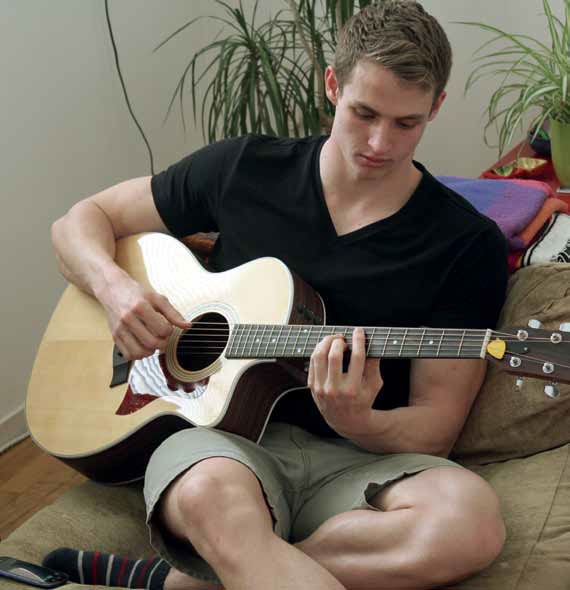 What else is there to ask after that? Oh yes! I’d love to hear you play something on your guitar. That shy smile appears again, “Are you re-ally sure?”
“Yes I am. Just pretend I’m not here, and show me how a champion relaxes.” He goes out to get his guitar from the other room, settles back on the sofa and starts tuning up.

Behind that imposing physique of his which everybody can admire when stroke after stroke propel him through the water in his butterfly races, Ben is a gentle and talented young man. But I think the best comment about his qualities comes from his number one fan, his 87 year-old grandmother Hazel. She played a cameo role in the recorded inter-view we did previous to this one and she told me, “I was a professional dancer in my younger days and I must admit, I was quite upset that none of my daughters nor my granddaughters wanted to take on ballet which I think is such a beautiful performing art, but when I saw Ben swimming the butterfly stroke, I said, ‘Look at him, he’s dancing on water!’. And then I felt my passion had been carried on.”

Whether swimming butterfly or free-style, Ben is a magical athlete who deserves to achieve what he has worked so hard for. So we wish him all the best because we know BEN will make us PROUD!

A full video of the interview with Benjamin Proud is available on DANTE you tube channel and digital and online version of the magazine including the cameo role Ben was fun enough to play for us with his grandmother Hazel.