Black or White, Put Some Diamonds on Your Plate!

Have We Come Back Full Circle to the Classical World?

Dante Recommends: Howson Paintings to go Under the Hammer at Fellows

Black or White, Put Some Diamonds on Your Plate! 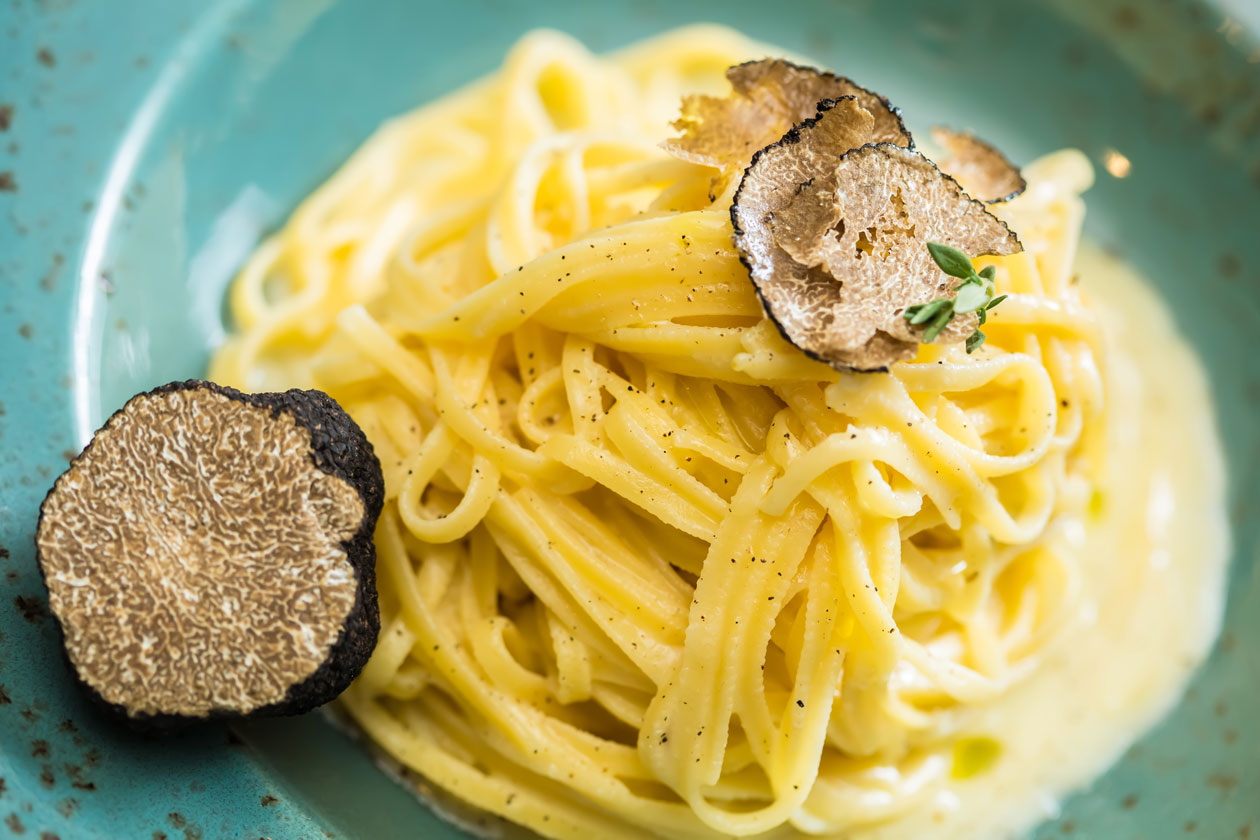 Marco Pernini, resident chef to the celebrities at Dantemag  talks about  Tuber melanosporum (black truffle to me and you!),  this precious fruit of the earth that has delighted poets and philosophers since the beginning of our civilisation and gives you  his recipe for the best tagliatelle ever with Tuber melanosporum from Norcia.

The first record of truffle’s existence appeared in “Natural History” by Pliny the Elder but also  Plutarch, the Greek philosopher, describes the birth of this magnificent tuber as a result of the  combined action of water, heat and thunderbolts!  Other  poets, including Juvenal, explained that the origin of this precious fruit of the earth was due to a thunderbolt hurled by Jupiter close to an oak tree sacred to the father of gods. Jupiter was also famous for his extraordinary sexual dynamism. This is why the truffle has always been recognised as having aphrodisiac properties.   Umbrian physician Alfonso Ceccarelli is among  the various Renaissance writers who with his book  “Opusculus de Tuberibus” (1564) summarised the opinions of Greek and Roman naturalists and  indicated that the truffle was always very much appreciated, particularly on the tables of the nobility and of senior prelates and in one of his different anecdotes,  he tells how,  for many of them, its aroma was a sort of “quintessence” that had an “ecstatic effect” on human beings.
I imagine if this was not enough to arouse your interest, to coin a phrase, in this precious element of nature let me venture more into the details so you can learn more about this delicacy.
Truffles  come in two types, black and white and, apart from the obvious difference in colours,  are not made of chocolate. Just kidding !
Despite the fact both type of truffles can be harvested twice a year, in summer and in winter, the summer black truffle and winter black truffles are actually two quite different varieties unlike the white truffle which is the same all year round.
Getting beyond  their botanical roots, so to speak! , another difference and the most important one, is their taste and this determines the  way they normally get used in cooking. 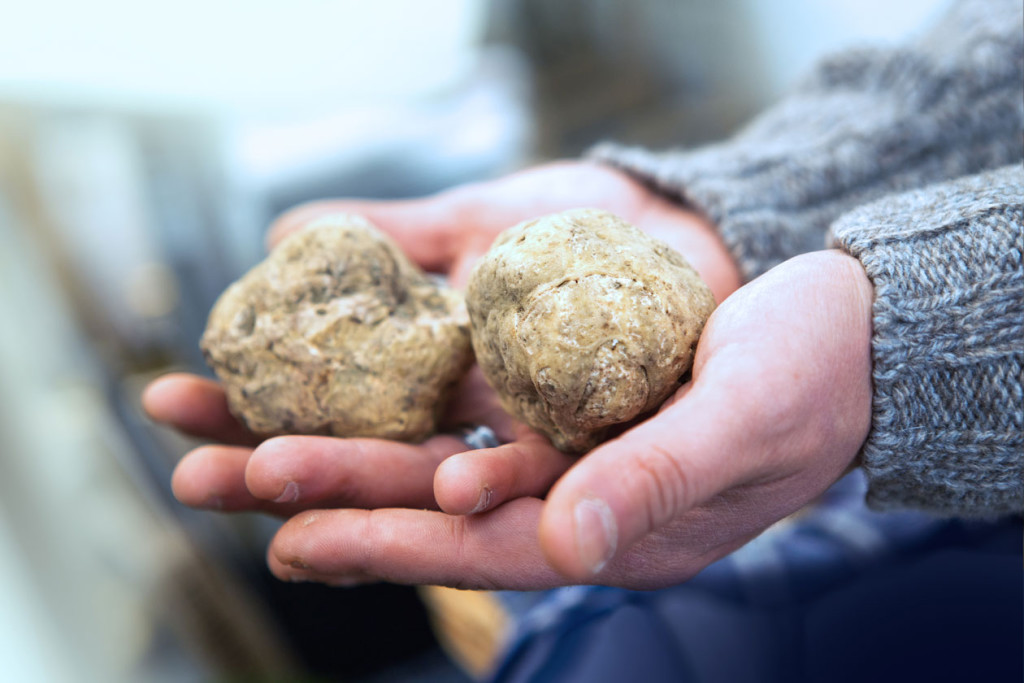 Generally, white truffles are best used raw, since they have that intense depth of flavour with a hint of garlic and shallots that gets released when you cut them fresh but ultimately it always  depends on the dish and the chef.
Black truffles are best eaten cooked as is the case for the precious black truffle from Norcia, the world famous Italian capital for black truffles.

If you want to experiment a little bit more with different combinations and you have not use this nectar of nature before, summer white truffles are probably your best bet as they are more affordable –  the flavour is still strong but  less musky than winter white truffles.

Black winter truffles from Norcia are the most sought-after, but you should be aware  that, unfortunately, there are copies around that can easily be mistaken for them due to having a similar shape and colour and but that’s all they have in common.  The  tuber aestivum is the black truffle harvested in summer, also called    scorzone in dialect,  which is fine but it is nothing compared to the tuber melanosporum harvested in winter, and this is the one to buy, although the price is exponentially higher.  But you can’t compare a crystal to a diamond, can you? 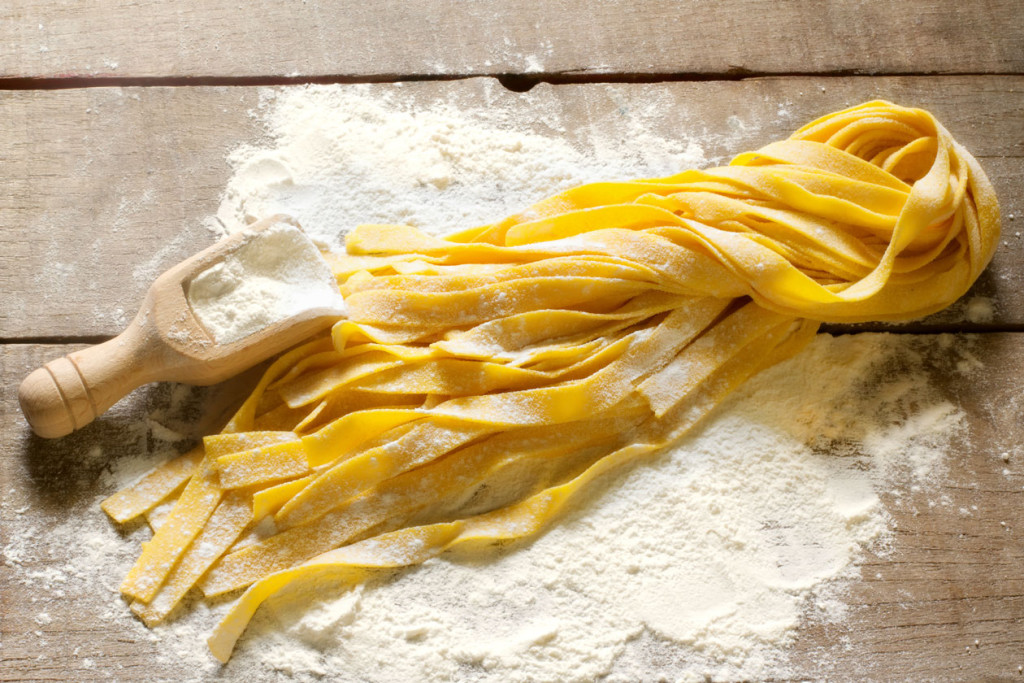 It was in fact the French gastronome and food writer Brillat-Savarin in the eighteenth century who first called  the truffle the “diamond of  cooking”. While his  compatriots, the  writer Alexandre Dumas said it was the “sancta sanctorum” of the table. In England Lord Byron loved its intense flavour so much he kept one on his desk, because, according to him, it helped his creativity, and coming closer to home,  Italian composer Gioacchino Rossini described the truffle to be “the Mozart of all tubers”.

Well if that is not enough to whet your appetite and your intellect, then what more can I say? Whether you are in “flavour” of  the  white truffle cut raw or the  more elegant and established  black winter truffle, make sure, just you would for a diamond, you always know where it comes from before you buy it. And as Norcia is not only the world capital of the black truffle but also my home town I have decided to keep it local and leave you with one of my recipes, using black winter truffles from Norcia – only the best for Dantemag readers! 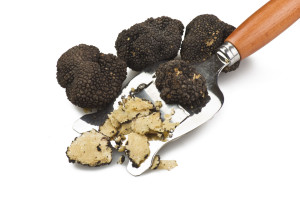 As a rule, I normally use one egg and 100g of flour per person and while this

recipe here is for two people, you can, of course, use multiply of this, according to how many people you are cooking for.
Place your quantity of flour on a flat, clean surface. Make a well in it and pour the beaten eggs in. Add a pinch of salt , then, with a fork, start beating the eggs, little by little mixing in the flour from the inside of the well. When the mixture becomes a paste , start using your hands  and knead until smooth, adding more flour, if necessary to prevent it from sticking to the table, making sure all the while that it never becomes lumpy.
Cover the dough with a cloth or a clingfilm then let it rest for 30-45 minutes at room temperature – this is very important for the elasticity of the pasta when you roll it out, do not skip this stage!

Now you can either use a pasta machine or a rolling pin to roll out the pasta.
I like mine ½ mm thick but you can change it according to the texture you prefer.

Cut into strips of about 6-7 mm width spread them out adding a little flour to avoid sticking  and hey presto, there you have your  fresh tagliatelle

Method:
In a large fry pan,  heat the oil; then add the shallot and garlic and cook on a moderate heat.
Add the cream,  salt and pepper and reduce,  stirring from time to time.
In the meantime, cook the tagliatelle and drain, then return to the saucepan, add the creamy sauce, mix it all together and put on a plate.
Finally grate some truffle on top and serve immediately

If you feel you don’t have the time to make your own pasta, you can always buy fresh, of course   but I would strongly recommend you to try to make it at home – there is world of difference and it is so rewarding. 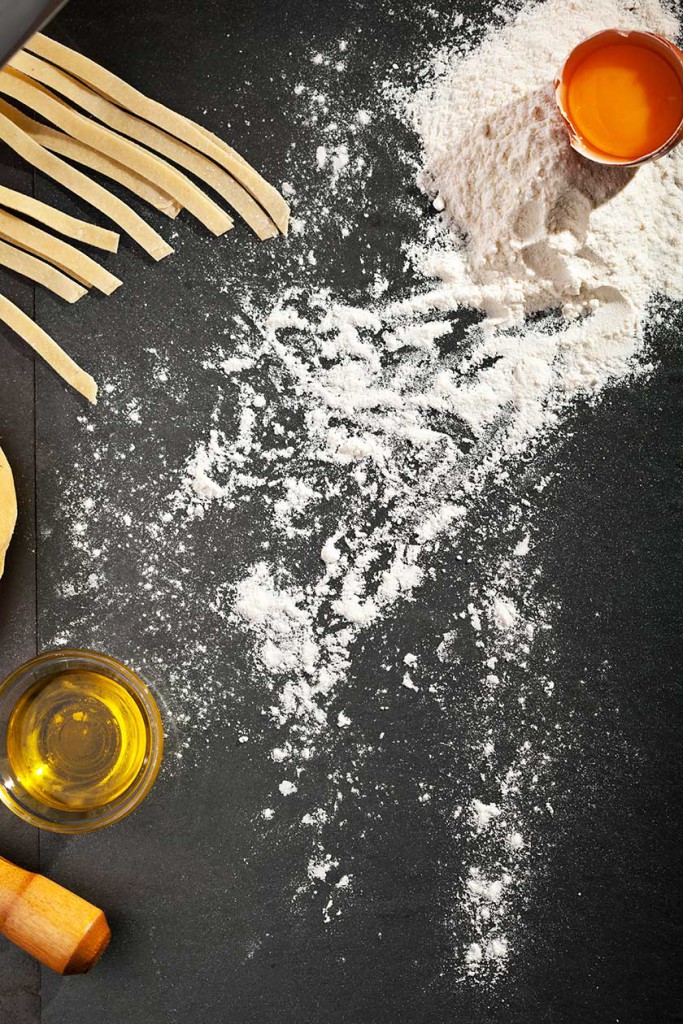