The Great World in Miniature: An Introduction

Doria and the Bucaneve: The Story of the “Snow Drop” the Most Famous Italian Biscuit

The Towering Figure of Wagner

The Great World in Miniature: An Introduction

They are stiff little men, and shiny. They stand alone in empty rooms. They stand pinned, exhibiting themselves, confronting or evading us. Franklin Pierce plays an old cocktail party trick and pretends he has spotted an acquaintance behind us. (“You there, hullo!”) Clever Andrew Jackson has rendered himself transparent. For his safety, he spawns a double. Lincoln turns his back. Some of them look so afraid! Garfield, McKinley and Kennedy had reason to ball their fists, but look at Washington, Jefferson, Van Buren, Taylor, Buchanan, Johnson (the first one, Andrew), Cleveland, Nixon. They look terrified. John Quincy Adams is backed into a corner. Warren Harding hides behind a wall. Why do they so mistrust us? We are only watching. They are only being seen.

Who are these little men? They are American presidents. Great men, huge men. Men of power, audacity and violence. The mightiest men of their day, some of them. (Look at cocky, A-Bomb Harry Truman: How big is it? Yay big. It hangs down past my knee.) They are titans. Enormities. Each one only 60 mm tall. They are tiny playthings. Children’s toys. Stiff-spined, but you could melt them with a Zippo lighter. You could strap bottle rockets to their legs and shoot them high into the treetops. These are not the presidents you learned about on endless, dreary, grammar school afternoons. They are Alex Forman’s presidents, which means, first and foremost, that they are Marxist presidents. Not Karl but Louis Marx: “roly-poly” and “melon-bald” Louis Marx, friend to Dwight Eisenhower, manufacturer of fine, injection-moulded toys. Marx mass-produced plastic figurines of, among other curiosities, cowboys, wild beasts and royals. And of our own beastly cowboy royalty, these 36 miniature heads of state. Men who were monstrously large, brought down to size by Mr. Marx’s machinery and now swollen again, reinvested with life and girth by Ms. Alex Forman’s lens. 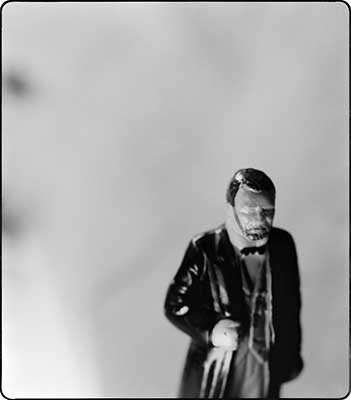 They look so lonely! Nothing to do but be seen. All day, to stand and wait, to be gazed upon, to wait some more. A Beckettian business, the presidency. Yet they are not quite passive. They stare back. Most of them do. They see and they are seen. Which makes them almost… human. And this is at least part of the point. In a prefatory note, the artist writes regarding the text of Tall, Slim and Erect: “I have chosen what sentences or paragraphs humanise the Presidents’ portraits and stories.” (my italics) A perplexing notion, to humanise. Conventionally, we use the word in a semi-Platonic fashion: to indicate the soul of someone; their striving, hurting core; some transcendent portion to which we can all lay claim. But that is not what Alex appears to have in mind. She is asking here what a portrait might be. She is stretching the bounds of the frame and in so doing, posing its contents as questions. What are they – these little presidents, their images, these things called human beings? And what is the polity their persons represent? (i.e. what are we, or at least those ’murikans among us?) With few exceptions –Truman’s insomniac aloneness, Lyndon Johnson’s hunger for just “a little love” – she informs us primarily of her subjects’ kinks, the presidents’ corporeal oddities, the idiosyncracies of their appetites, their deaths. Save through compositional and gestural allusion – Lincoln’s turned back, wheelchair-bound Franklin Roosevelt standing tall – the great and awful deeds for which they are renowned are, for the most part, omitted here. We learn instead that George Washington had “tremendous feet” and pockmarked cheeks. Adams suffered from “Fidgets, Pidlings” and a crippling “Quiveration” of the hand. Jefferson had boils on his buttocks. John Quincy Adams was a drunk, and flatulent. Andrew Jackson was a slobberer. As an adult, at least, no one ever saw Grant naked. Chester Arthur preferred to be dressed by little boys. During the final weeks of his life, James Garfield took his meals through his rectum. Woodrow Wilson’s “ugliness obsessed him.” Teddy Roosevelt could eat a whole chicken in a sitting. His cousin, Franklin D., was anorexic but could carry books with his teeth. Upsy-downsy John Fitzgerald Kennedy gobbled speed, taking the edge off with goofballs and paregoric. Chastity caused him headaches. Nixon breakfasted on cottage cheese and ketchup. Tyler died of biliousness and Polk of diarrhea. If there is a humanism at work here, it seems to be a Rabelaisian one. We are joined by our bodies, their differences as well as what they share. Even presidents fart and itch and fuck. They are not so far away, these tiny giant men. They are separated from us only by the black frame surrounding each photo and by the flatness of each page. 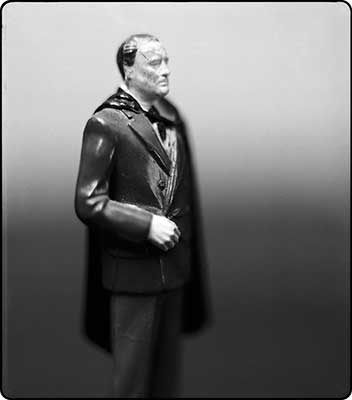 But that distance, however close, is an eternity. Just try and break through it, to push past the surface of the paper, to reach in, to test William Henry Harrison’s dread “wilted petunia” grip. In that regard, we would be fools to forget that the texts Alex uses to describe her presidents are not hers, which is to say (naïvely), that they are borrowings, samplings, collage. They are not written so much as assembled from many dozens of other sources, the ones we deem “original.” Her photos undertake a parallel refraction. We are not looking at men but images, digital prints in two dimensions of three-dimensional resinous plastic figurines which were themselves modelled on two-dimensional images in Kodachrome or tintype, daguerrotype or oil. They are quotes of quotes of quotes of quotes, like all of us. 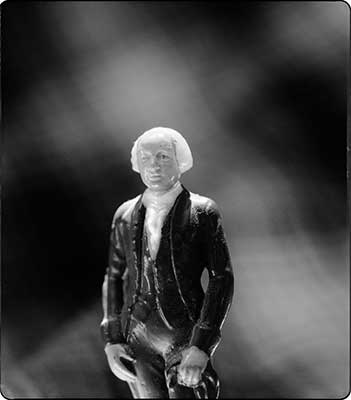 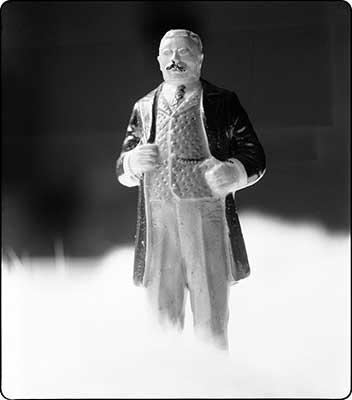 The same could be said – and is here said by inference – about that vast, befuddling abstraction which each of these small men at one point agreed to represent: the nation. And particularly this nation, this boldly self-declared republic – this res publica, or, crudely, this public thing – this grand and mythical democracy. What counts as public? Who gets to be the demos? Throw quotes around “us” too, for “we” are equally citations, remembrances of cropped images drawn from recollections of half-invented stories about rumours someone whispered in someone else’s ear. Someone perhaps distracted by drunkenness or solitude, by headaches caused by want of intimacy, by burning boils on the buttocks. This does not mean we are nothing. It means we are not finished, never were. 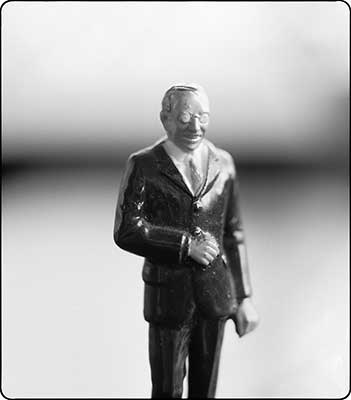 I emailed Alex to ask her about her presidents’ feet: where they were, why we could not see them, why she had chosen to uniformly crop them out. (Again: “I’ am the selective process.”). She responded: “I was trying to make each president as human as possible. I took them off their pedestals.” She was punning: each of Louis Marx’s toy statuettes stands on a trapezoidal base. If you look close, you can almost make out Lincoln’s. But there is that word again: human. And if I understand her correctly, Alex meant not just that she wished to render her presidents humble and alive, to free them from their frozen iconicity. The naturalist illusion here, such as it is, requires that we not be permitted to glimpse the pedestals, the sight of which would require us to acknowledge that these great and many presidents were naught but children’s toys, that they were mere quotes of quotes of quotes, not presidents but precedents. If it is anything, to be human, she suggests, it is not only to fart and itch and fuck, but to be complicit in one’s own deception, to believe against all better judgment in the accuracy of mirrors. The human is a hole. It is the secret hole in the roof of Grover Cleveland’s mouth and the removable rubber stopper he used to plug it up. The nation is a crater. “Take linearity out of history and you get humanity,” Alex writes. You get seeing and being seen. You get blindness and invisibility also, words that can be read but often are not, photos that stare back at you, looping technologies of re-presentation, “an endless tracing,” letters missing, feet left out. Watch carefully. The great are tiny, the miniscule immense. 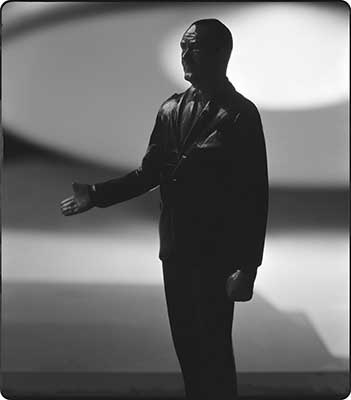 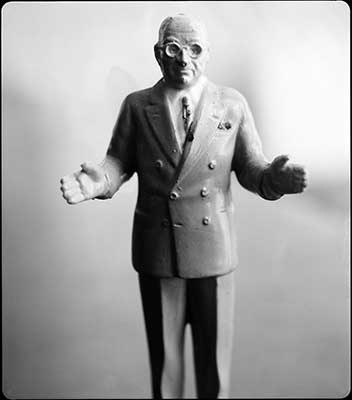