/ Architecture @en / The Pantheon in Rome: The True Original

The Pantheon in Rome: The True Original 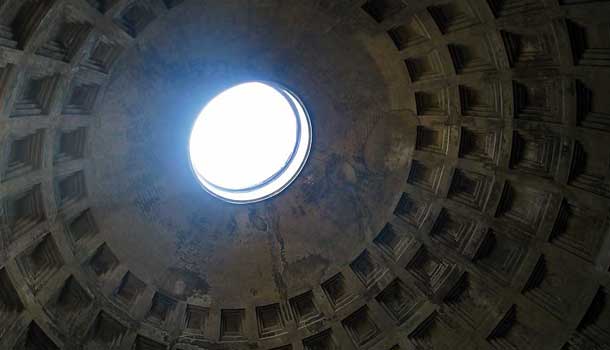 Commissioned by Marcus Agrippa as a temple to all the gods and rebuilt by Emperor Hadrian in about 126 AD, the Pantheon has influenced the work of many architects of the Western world. It has been much imitated throughout Western history, but it remains a truly original, seminal work of art.

The ancient Roman writer Cassius speculated that the name of the Pantheon comes either from the statues of the many gods placed around it or in consideration of the fact that extending the curvature of the inner dome’s diameter from top to floor it creates a perfect sphere, symbolising the deities of heaven. In fact, the meaning of the word pantheon in Greek is “of all the gods”. The Pantheon’s structure is deceptively simple. This structure consists of a cylindrical drum which supports a hemispherical shell (43.20 m), preceded by a porch that opens onto the front. This porch has a portico of Greek origin with eight Corinthian columns supporting the pediment.

It is made of concrete reinforced with strips of glazed bricks. The weight force is discharged along the dome and is distributed in the drum through relieving arches built into the masonry. The wall of the drum is thick enough (6.10 metres) for a number of niches to exist within it, alternately rectangular and semicircular in form. In this way the drum is transformed into a set of large support pillars, thus reducing the structure’s weight without diminishing its resistant function. The weight of the shell, and thus the intensity of the forces involved, has been reduced by varying the density of the materials used in the cement mix: it goes from the pumice in the upper part of the dome, to tufa in the middle and the basalt in the foundations.

The Pantheon – Detail of column

The closed-in, heavy effect of the dome is diminished by deep coffers that gradually lessen in depth towards the large central opening, the oculus, which has a diameter of 9.10 metres. Since the oculus is an uncovered opening, the floor beneath it is slightly concave in shape slanting down towards a central drain, where the rain can run off. It is the only Roman building to still preserve the original marble facing, mosaics and stucco. The huge bronze doors (at 7 metres high) are among the largest Roman gates still existing today.

The construction of the Pantheon was part of a programme undertaken by Augustus Caesar and his supporters in the aftermath of the Battle of Actium (31 BC). The inscription across the front of the Pantheon says, M.AGRIPPA.L.F.COS.TERTIUM.FECIT, which means “Marcus Agrippa, son of Lucius, having been consul three times, built it.”

However, according to a recent re-evaluation of the bricks dated with manufacturer stamps, Agrippa’s Pantheon was destroyed twice before, in 80 BC Emperor Domitian rebuilt it, but it burnt down again in 110 BC. Some scholars claim that construction started again soon after the second fire. In that case the design of the building should not be credited to Hadrian or his architects. Instead, this honour might belong to Trajan’s architect, Apollodorus of Damascus.

Internal structure of the Pantheon’s dome

Although there might be some truth in thinking that the reconstruction happened under Trajan’s reign, a legend tells that Apollodorus was, indeed, Trajan’s favourite architect. However, he couldn’t get used to the idea of buildings incorporating cupolas, which were becoming very fashionable at the time. Rumour has it that on one occasion, when Apollodorus was discussing these new forms with Trajan and dismissing them out of hand as unsuitable for Roman buildings, Hadrian ventured an opinion – something about the effect that the beauty of these curious, new aerial structures would have throughout the Empire. Apollodorus flew into a rage and shouted, “You don’t know what you’re talking about! If you want your bloody pumpkins you can bugger off and build them somewhere else.” Apollodorus was set in his ways, very old school, and always highly sarcastic and dismissive of anyone who challenged him. He also probably considered Hadrian a dilettante and full of vices; who only owed his position to being related to the Emperor. But the fact is that when Hadrian succeeded Trajan, he endorsed the “pumpkin” style structure throughout the Empire. Therefore, this possibly apocryphal tale, recorded by Roman historian Gaius Suetonious Tranquillus, may cast some doubt on the theory that Apollodorus was the architect. It may have started under Trajan, but certainly the Pantheon was finished under Hadrian, emphatically with a cupola on top.

Since that time the Pantheon has undergone numerous reworkings. In 609, the Byzantine Emperor Phocas gave the building to Pope Boniface IV, who converted it into a Christian church and consecrated it to Sancta Maria ad Martyres, (Santa Maria dei Martiri). This saved the building from the abuse and destruction that the majority of Rome’s ancient buildings suffered during the early medieval period.

Paul the Deacon records the spoliation of the building by the Emperor Constantine II who arrived in Rome in July 663 AD: Remaining in Rome twelve days, he pulled down everything that in ancient times was made of metal for the ornament of the city,even going so far as to strip the roof of the church [of the blessed Mary], he took its bronze tiles and sent them with all the other ornaments to Constantinople.

Much fine exterior marble has been removed over the centuries, and there are capitals from some of the pilasters in the British Museum. Two columns were swallowed up in the medieval buildings that abutted the Pantheon on the east and were lost. “Quod non fecerunt barbari fecerunt Barberini” (“What the barbarians did not do, Barberini did”), said a satirical Roman figure called Pasquino, commenting on the final spoliation of the Pantheon made by Pope Urban VIII (1623-1644), a member of the Barberini family. He ordered the bronze ceiling of the Pantheon’s portico to be melted down. Most of the bronze was used to make bombards for the fortification of Castel Sant’Angelo, with the remaining amount used by the Apostolic Camera for various other works.

Since the Renaissance, the Pantheon has been adorned with works of art. The best-known is the Annunciation by Melozzo da Forlì. It has also been used as a final resting place for several well-known figures. Amongst those buried there are the painters Raphael and Annibale Carracci, the composer Arcangelo Corelli, and the architect Baldassare Peruzzi. They are accompanied by two kings of Italy: Vittorio Emanuele II, the king that unified Italy, and his son Umberto I, as well as Umberto’s queen, Margherita.

Despite all the different meanings the building has come to represent over the years, the Pantheon remains first and foremost a pagan temple transformed into a Christian religious structure. That is why it is the only building from ancient Rome to be practically intact and it is still used for religious purposes today.

Detail of the roof of the Pantheon

From the Renaissance to the 19th century, architects from all over the world looked to the Pantheon as inspiration for their work. Brunelleschi took the Pantheon as a guide when designing the dome for the Duomo of Florence. Andrea Palladio continued the trend, with his neoclassic style dominating the architecture of buildings around the world. Thomas Jefferson’s Rotunda at the University of Virginia, The Library of Columbia University in New York and the State Library of Victoria in Melbourne, Australia are just a few outstanding examples of the influence that this spectacular Roman building has had.

Whatever the true origins of this magnificent structure are, almost two thousand years after it was built, the Pantheon’s cupola remains the world’s largest unreinforced concrete dome. If that is not enough to endow it with a mystique all of its own, then it surely is enough to make it a truly and uniquely original wonder of the modern world.