Not Only Cima, da Conegliano

The Pantheon in Rome: The True Original

Not Only Cima, da Conegliano

The Italian wine industry in 2011 had something to celebrate despite the political turmoil that has buffeted the country. Italian wine is now the best selling wine in the world. Led by the increased popularity of Prosecco wine, it has managed to export wines to developing nations, mainly in the BRIC countries (Brazil,Russia,India, China) but also in Africa.

The Italian winemaking tradition dates back to the Romans, but one of the best colleges to study wine-making or oenology in the country – if not the best. Period –  is definitely the Scuola Enologica di  Conegliano.

Situated on a hillside about 45 km north of Venice, the small city of Conegliano has been featured in many of the paintings of its most illustrious citizen, painter Cima da Conegliano.

The winemaking college of this same city produced another artist, maybe not as famous as the painter Cima, but still illustrious and is now an institution in the world of winemaking: Giorgio Dalla Cia. 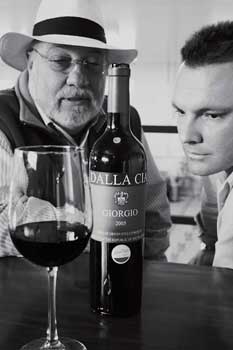 Giorgio moved to Stellenbosch, the wine district north of  Cape Town in  South Africa, more than  thirty years ago and has since become an icon with his style of winemaking. Giorgio blends the Italian tradition with the knowledge he has gained of French winemaking. This combination has made him a pioneer in the creation of  truly unique South African Bordeaux-style blends that have acquired recognition and awards worldwide. 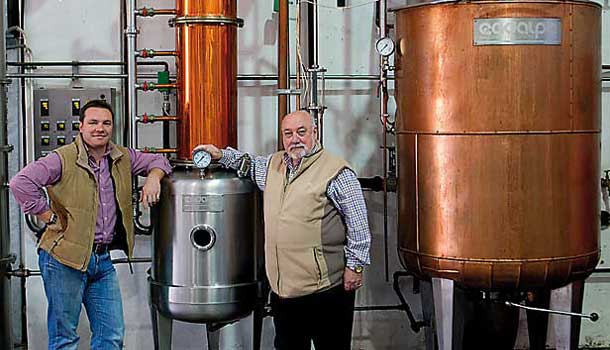 George & Giorgio in front of still

In 2008, his signature blend, the 2005 Giorgio, a classic combination of Cabernet Sauvignon and Merlot, won the silver medal at the Decanter World Wine Award.  This was the first time that a Dalla Cia wine had been entered into this prestigious competition, widely rated as the most influential wine awards in the world. According to Giorgio, the prestige of winning a silver medal in the Decanter World Wine Awards Award is the equivalent of winning gold in other competitions. Their commendation described his winning wine thus:

“Opulent, well-structured and full-bodied with a generous mouth feel with a  long lingering aftertaste.” 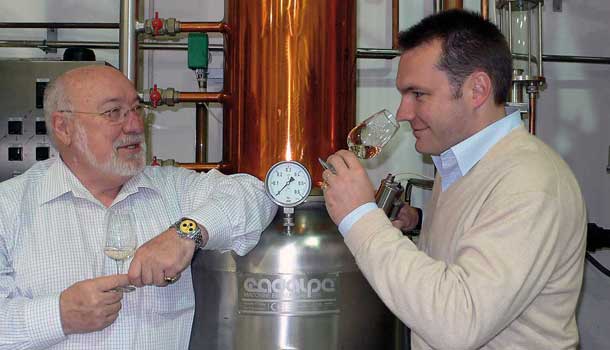 Decanter’s unique judging process has earned it the reputation as “the ultimate terroir competition.” The judges, over fifty of  them, came from every corner of the world,  and were as rigorous as ever. Despite the large number of entries, the consistency in terms of medals awarded, was remarkable. In 2008, on a similar scale to previous years, only 64% of wines were awarded a medal, and of those just 2.84% won a gold medal or a trophy, with only 12.4% securing a silver medal.

But I wanted to learn more from the man himself.

How influential has the Conegliano wine making college been in your work in South Africa?

Studying at such a prestigious college gave me the basis and the knowledge to apply the finest Italian tradition of wine-making. It was like learning to paint in the Venice Academy. It was a source of a great inspiration to me. I even met my muse there Simonetta, who became my wife.

How do you merge the Italian and French tradition together in your wine?

Just like a painter who knows that by mixing one colour with another he can get the nuance and result he wants. While I was at the college, I spent my holidays in France  learning the language and it was then I discovered those marvellous French wines. As a result, I started to learn about the French winemaking tradition and the philosophy behind the Bordeaux blend.  When I came here to South Africa and recognised the opportunities that the terroirs offered in these areas, I felt like I had the right canvas, the right light, the right ingredients basically, to make my wines – it was the perfect inspirational setting.

What do you think about the concept of new and old styles of making wine?

The concept of the European wine as “old wine “is about the complexity of a wine that acquires its full potential with age. It is like the Mona Lisa by Leonardo. You never cease admiring it because every time you see it you discover something new. In my way to define it, I call old-style wine a meditation wine. You must take your time to appreciate it.  The so-called “new wine” is for the society of today that has been brought up with Coca-Cola and so-called fruit juices, where the interest the bottle generates is more due to the packaging rather than what’s inside. There is a fundamental distinction to be made here between who makes wine and who sells bottles.

Is there any chance that these two worlds can meet in the middle?

There is obviously space for both in the market, but there is a clear difference between the two products. I think it is a learning process that eventually will lead the less knowledgeable consumer to appreciate how well a wine is structured. That’s why, with my son George, we are consultants for people around the world and train them how to appreciate fully this nectar of nature.

Any hints  you have for any budding wine maker or consumer?

A young winemaker should approach winemaking with a passion almost verging on religious devotion. Learn the techniques then create your own adventure, just as I have done. Winemaking is an art, and you need to approach this with humility because there is a lot to learn. As for the young consumer, they have to understand that making wine is an art in itself and  they should respect and appreciate the effort that goes in to transforming the fruit that nature gives us into a refined, natural product.

In 2011, Giorgio and his son George Dalla Cia scooped the illustrious Wine Spectator Award of Excellence with their collaborative venture showcasing South African and Italian wines at a top 5-star establishment in Africa. The luxurious Sankara hotel in Nairobi trusted the  Dalla Cia expertise with sourcing their wines and compiling a world-class wine list for their stylish restaurant and wine bar, The Gallery. They secured, for the first 5-star hotel in Central and Eastern Africa, the highly coveted Restaurant Wine List Award from the authoritative Wine Spectator Magazine of the USA. 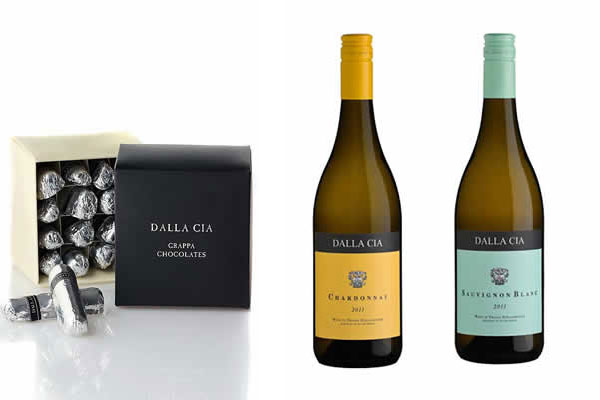 The annual Wine Spectator Restaurant Wine List Awards recognise restaurants and bars across the world for exceptional wine lists that offer variety, quality and above all, appeal to a wide range of tastes. In compiling The Gallery’s exclusive wine list of over 200 different wines, most of which are unavailable elsewhere in Kenya, the Dalla Cia’s focused on exceptional quality, authenticity and value. While top South African and Italians wines feature prominently on the list, wines from other regions of the world including France, Australia and New Zealand, are also represented.

To qualify for the prestigious Wine Spectator Restaurant Wine List Awards, which attracted more than 5000 entrants last year, submissions had to include current wine lists with detailed information on the wines and their producers as well as accompanying food menus.

“Wines are created out of respect for the quality of the grape and the terroir and then you blend in your own personality,” said Giorgio, who recently scooped another  award with the Dalla Cia Giorgio 2007  in the top 100 SA  Wines list .

We know that there are only seven musical notes, but you only need a few to make a beautiful symphony.
Like his compatriot, Cima, who turned colours into masterpieces, Giorgio has found in the landscape of South Africa the perfect setting for his creations. As a result of blending his Italian tradition with the French ways he studied,  he has been able to forge a unique way of making wine. But how much of his personality has he invested  in the crafting of his wines? As with any artist, he is not letting on. That will have to remain his best kept secret. In the meantime, we can just wonder at his talent as we relish and savour his masterpieces.