The movie “Our Last Tango” is nothing like “Last Tango in Paris” but it is as bittersweet. Mark Beech reports.

This is a preview of an article appearing in the next print edition of DANTE magazine. The movie was released in the U.K. on September 21.

Tango, we all know, is one of the sexiest dances imaginable. But study it, and you see why it takes two people to tango completely in harmony. The passionate embrace needs to be intimate; heads together, almost kissing at times; eyes staring into eyes; limbs locked; postures perfect.

It is the elegant tuxedo and suggestive sequined dress, split skirt and high heels. It is a seductively slow-slow-quick-quick-slow routine; the hands clasping the back; the loving embrace of languid romance then the rushed syncopated steps in exact synchronization; the swishing skirt for the spins, the sheer trust as she leans back in a sultry dip and is picked up like a feather by her partner. It is the accordion-like bandoneon backing, which wheezes between mournful longing and matadorial pomp. And always the mystery: is this a dance of love, does it celebrate their individuality or partnership; sweet surrender, proud goodbyes, or all of the above? And yes I said yes I will Yes.

To do it right, it often helps if the partners are close and harmonious in more ways than one. So imagine what happens if you have the same professional tango partner for decades – nearly 50 years in fact. You practice together incessantly; you are practically married. This is what happened to María Nieves and Juan Carlos Copes from Argentina’s capital, Buenos Aires. They indeed fell in love and married. They became the most renowned tango dancers in their district, their city, country and the most notorious couple in tango’s history. They made tango more famous. This is a hot, sweet love story that gets increasingly bitter and cold, surviving many ups and downs. Somehow they always came back together. Until…

Now imagine what happens when one partner walks away for good, finds a new wife and new dance partner.

This is the springboard for a biopic documentary, Our Last Tango, which touchingly brings the two together for one final tango for the cameras. Juan is now 86, María is 83. They open up about their lives, loves, hates and passion.

María was born in 1934. As a child, money was tight. She improvised dolls out of soda bottles, with skirts from pieces of cloth. The film has a young actress playing her. Then the old star comes on set to emotionally recall her early years. Her father died and she began work as a maid aged 11. Shortly after, she started going to a “milonga” (a social club with dancing) with her older sister Niata. María was too young and only allowed to watch. She did this for years, learning all the moves by heart and going home to dance with her broom in the kitchen.

One of her sister’s partners was electrical-engineering student Juan, born in 1931. At 17, he discovered the world of tango by accident. He went to a milonga with friends and was fascinated in the dance which had swept Paris in the 1930s. He went to a different milonga every night, where he asked any woman he could to dance. He said it was the only entertainment the working class could afford. This was tango’s golden age, when it was the “diversion of the poor people”.

Finally Niata moved away from tango because she found a husband. María took to the floor and was fast-footed and fluid. In an echo of Holden Caulfeld in The Catcher in the Rye, Juan says that in her “I found my Stradivarius.” Soon after they became romantically involved. Starting with the Atlanta, they toured dance halls across Argentina. Their reputation grew and they were cheered even by rivals. Nobody was as swift, as elegant, as passionate – and they made it look effortless, As María says: “Never again will there be a tango double like this.”

They won the national tango competition in 1951. Juan decided to drop his university studies to start an uncertain but exciting career as a dance professional. They saved up every peso they had to rent a theatre and stage a show of their own. A producer in the audience loved it and they toured South America and Europe.

By the mid-1950s tango clubs were closing, eclipsed by the dance phenomenons of cumbia and rock ’n’ roll. So in 1959 they arrived in America only with “a suitcase full of dreams” because tango was little known there. They struggled to survive. María was homesick but loved Juan, and all he cared about was the tango.

Juan was determined to make the show as eye-catching as possible and partly in desperation he had the zany idea of dancing on a tiny table-top – knowing it was dangerous and one wrong move would be disastrous. María was reluctant but this became their breakthrough and trademark. They performed at the Waldorf Astoria, with the composer Astor Piazzolla, and were on The Ed Sullivan Show and Broadway.

At María’s insistence, they wed during a visit to Las Vegas in 1964 – and she says it was only later they discovered the marriage certificate is not valid in all countries. Soon after this, “things started to fall apart.” They returned home, but then Juan was off on a world tour without her.

Not for the last time, she was devastated. She fell in love with a man she met at a milonga. Juan returned after two years to look for her. They started to dance and live together once more. But Juan was by now drinking, partying all night and seeing other women. He confesses this almost cost him his life and he was near suicide – but he was saved by his second wife Miriam Albuaernez, 20 years his younger. Soon she was expecting their first child. This was a huge shock for María. (In the movie, the sadness in her eyes is still real as she talks about her own desire for children, as much as her smile is wide when talking about tango.)

This was a time of open hatred. They couldn’t live with or without each other and finally got divorced after nine years. The two didn’t even speak a word to each other and for two decades met only on stage. The stormy affair seemed to fuel their act, where they danced cheek-to-cheek like true lovebirds, staring into each other’s eyes. Both were painfully aware of the ironic contrast between the public persona and the private reality of heartbreak.

They were the lead dancers in the acclaimed Tango Argentino, which became a successful show choreographed by Juan. In 1983 Claudio Segovia brought it to Paris, and later they were off to tour Asia.

At this point, Juan’s wife told him not to come home if María was still his dance partner. He spoke to her at last to say it was over. She broke down and threw up in the Japanese dressing room. María, now more than 60, was depressed, and for years lost her pride and self- confidence before gathering courage to dance again with a part in the musical Tanguera in 2000.

Meanwhile Juan’s career was going strong. He choreographed Tango, The Movie, and taught Lisa Minnelli among others. His shows featured other middle-aged couples who proudly flaunted their wrinkles. Even now he continues to dance regularly in a Buenos Aires show. He has two daughters, one of whom, Johanna, dances with him, as does his wife. María teaches, judges, and sometimes still dances, always getting a warm reception. She lives alone. They don’t see each other and the film is one of their rare reunions.

Apart from dancing, the couple loved the cinema. They were fans of Fred Astaire, Ginger Rogers and Gene Kelly. In the new movie, it is left to younger stars to reenact the couple’s glory days. They are impressive and include Pablo Verón (The Tango Lesson). The highlight comes after María recalls that they saw Singing In the Rain five times. This is coupled with shots of the newer stars, who look a little like the younger María and Jose themselves, dancing a fractured tango on a rainy bridge. This impressive sequence’s magic is broken with an unnecessary interview insert where the new dancers comment that they look like Gene Kelly and his partner too.

The 80-minute movie starts with Juan and María coming together for a last tango. They come from opposite sides of the screen, the only time we see them together. They are interviewed separately – sometimes by the younger actors, or talking to an unseen questioner off-screen. 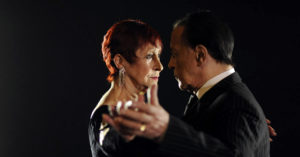 The action cuts back and fore between reconstructions and pieces in sepia. The director manages to find some archive material, faded press cuttings, torn photos and grainy film. More of their TV appearances would have been welcome. There is a lot of pathos, contemporary footage of streets at sunset and an acoustic guitar theme which is haunting in small doses.

The film is written and directed by Germán Kral, who left his hometown of Buenos Aires to study in Germany. He had been thinking of telling a general story about tango until he talked to María and spotted her poise and composure on the story she must have recounted many times. She has a lot to say for herself while Juan is rather more the strong, silent type (all subtitled), but much is in his thoughtful autobiography ¿Quien Me Quita Lo Bailado?

The size of Kral’s name on the posters is matched by his former teacher at Munich Film School, executive producer Wim Wenders, known for Pina, Buena Vista Social Club, and Wings of Desire. The two worked together on A Trick of the Light and Kral’s Música Cubana.

The film, shot in 2014, has been shown at festivals since 2015, including Toronto, Adelaide, Miami and the Berlinale. Its reverence of Tango is often touching: the dance is an alluring anguish and celebration, they say: “I was born to tango and I will die doing it.” A beautifully passionate movie. 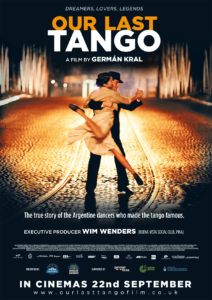