/ Art @en / Like a Dog With Two Wheels – The moving story of an Italian who gives disabled animals a second chance.

Like a Dog With Two Wheels – The moving story of an Italian who gives disabled animals a second chance. 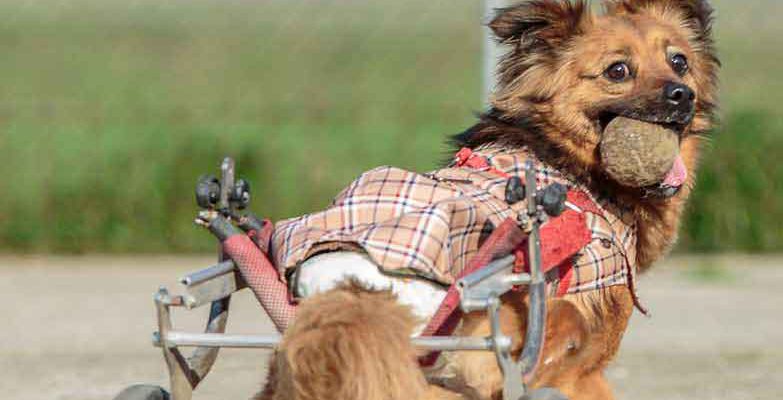 Cristina Colombera meets an enlightened Italian whose special empathy for animal feelings has led him to single-handedly transform their lives.

“We should all be like them. When I go walking a dog with his little cart, people turn and stare with pity. The dog isn’t bothered by his disability and stares back at them with a ‘What’s the big deal?’ look and carries on happily wagging his tail. We have a problem with the cart, not the dog. We need to learn from them how to cope with life.”

Alessandro Ortolan is an animal whisperer, especially for those pets that are disabled in some way.
He has an empathy for them that goes way back when he was two years old. Every day he wanted to go and look at the “moo-cows”. Only then was he hap-py. He grew up dreaming of becoming a vet but the ups and downs of his life meant he started out as a general odd-job man – surprisingly when he admits he hardly knew how to use a screw-driver – and then started a livestock nursery course. Until one day when everything changed. The animal husbandry course he was on introduced him to the world of little carts for disabled animals and he realised he could help his beloved four-legged friends in that way as well. 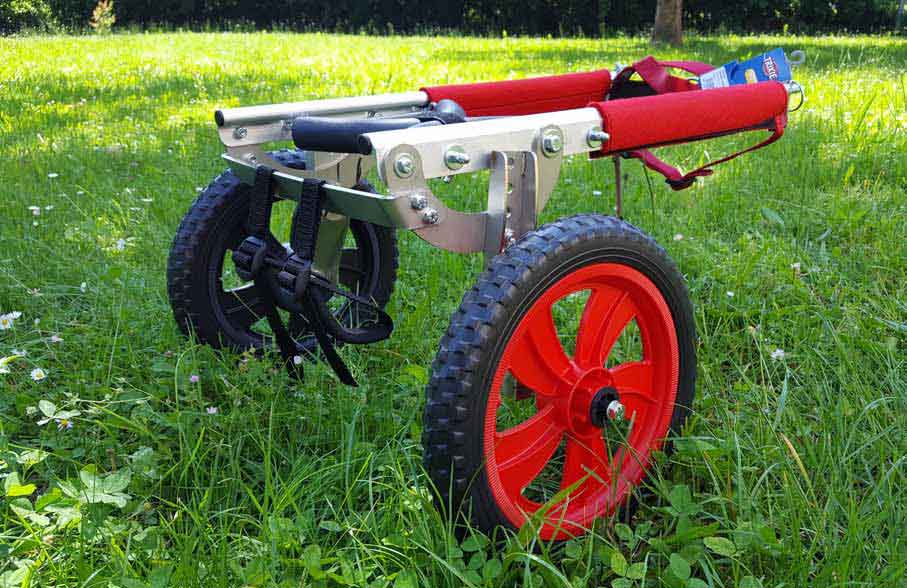 “When I try to help them, I try and ‘feel’ like them, feel their suffering. I become them. I leave my human side behind, because if you really want to help an animal, you can’t try and humanise them and use that as your starting point. As soon as you become like them, then everything falls into place. We humans have a problem – we don’t realise, or rather we choose to ignore, that there is just a 0.0000001 difference betwe-en us and them, everything else is identical. We’re all mammals, es-sentially one and the same beings. I improve their lives because I take on board their feelings. As soon as you do that, you can immediately sen-se whether you are making things better or worse. Many professionals advise putting a board underneath the animal’s belly and taking him around like that. Well I dare you to lie on your belly on a bench, hol-ding up your legs and distribute your weight evenly: just tell me how many seconds you can manage to keep that up before you get incredible pains in your stomach. I’ve tried it and I just had to get up because I thought I was dying. How can I pick up a 45 kg Alsa-tian by its belly and then walk with it for a kilometre?”

Treviso born and bred, 51-year-old Alessandro is pre-pared to travel hundreds of miles a day to go and mea-sure up an animal for a little cart, tailored to each one. His eyes light up with emotion when he talks about it. His very first cart in April 2011 was for a dog aptly named Lazarus! 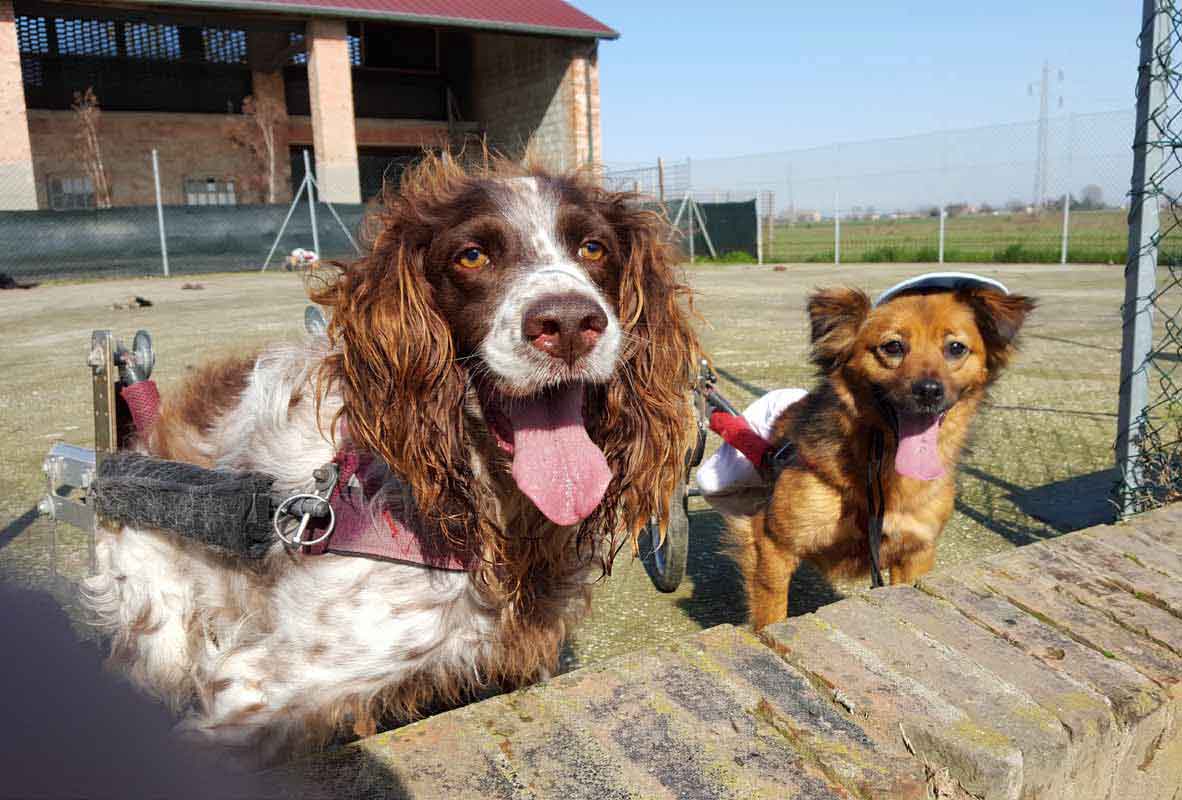 Since then, Alessandro has built thousands of carts for animals who have now been similarly “resurrected”. Emblazoned on the side of his van is the strap line “My second chance”. That says it all; it’s his mantra, in complete contrast to those who think it’s much easier to put down a dog, or cat, or any animal, just because, say, it has a problem with its hip… “and it will only get worse”.
“If your mother or father has a problem walking, you give them sticks, don’t you; you don’t kill them off! We should treat our little friends in the same way. They are living, feeling beings and they have the same right to live as we do.” 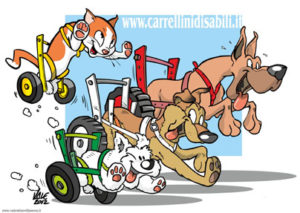 Alessandro’s life is a battle against those who don’t accept disability and therefore oppose practitioners in his field. “There’s still plenty of people today, perhaps even too many, who recommend that others put down their furry friends. And even when they don’t put them down, they propose solutions that actually do more harm than good. Sometimes they delay doing anything for ages before suggesting a cart, thereby creating needless suffering – ‘my vet told me I can’t think about a cart until my dog gets disabled’. You’re kidding me, 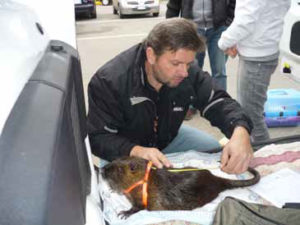 right? Because a cart is supposed to make me disa-bled? If I have a hip problem I exercise on a bike; strengthening my muscles helps my bones and I don’t impact on supporting joints. For animals it’s exactly the same. With a cart their muscles get toned again and they find they can live a normal life again, physically and emotionally.”

About 50% of his carts for dogs are for those involved in accidents and the other 50% are for physical compli-cations. As a matter of principle, they are cheaper than their potential market value: “You need to help everybo-dy, animals and 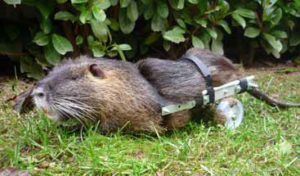 human companions in difficulty. That’s why we try to keep the cost as low as possible.” Love knows no boundaries, only in your mind, and so “The Magic Man’s Carts” have now crossed the Atlantic, going as far as Argentina and are soon to be seen in Honduras.
For those really down on their luck, alongside the com-pany, an association exists called “Disabled Carts”, founded to help those in financial need. It’s a crowdfun-ding project with a large number of generous donors, which enables it to buy the basics to build the carts. Alessandro and his supporters have assisted dogs, cats, Mariah the coypu from Pavia – already on her third cart because she’s got bigger – kid and adult goats and even a tiny hedgehog. 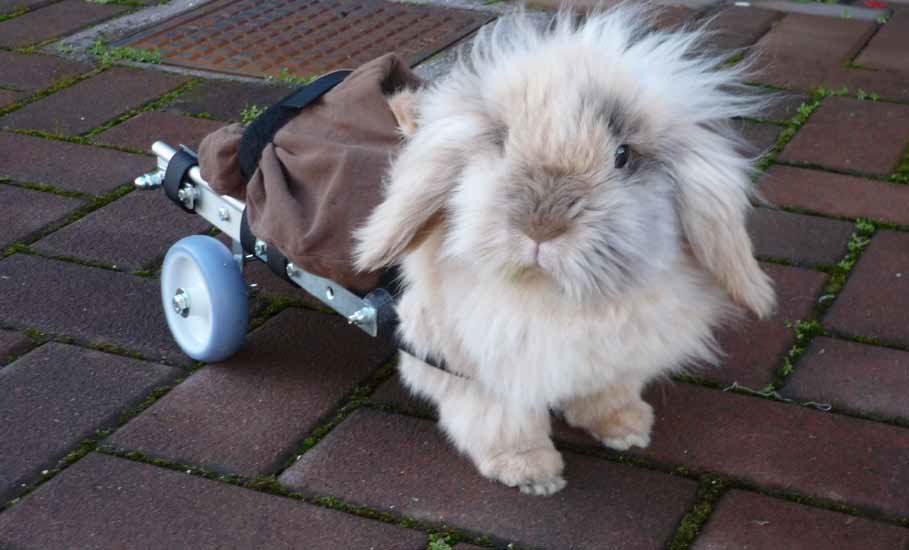 On his Facebook page, Alessandro gets messages such as “I’m writing to thank you on behalf of Peggy. At last, she can now move around without a problem. She has started to run straightaway- which most pugs don’t do! We can’t get over it, especially how beautiful the cart itself looks and how tailored, light and easy to move it is.” Or: “We haven’t seen him so happy for ages. I can’t thank you enough for his new life on two wheels. Rolli sends loads of licks. See you soon.” 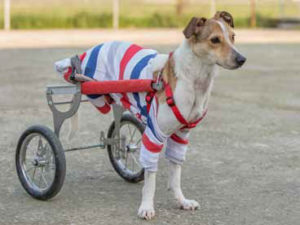 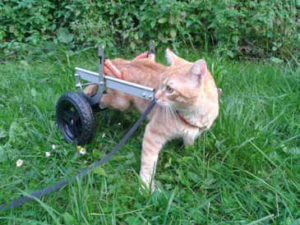 In addition, along with Nicoletta Cisventi, Alessandro has set up “Il Fagiolo di Piccolo e Gina”, a ‘Family Hou-se’ where animals are welcomed and cared for as if they were at someone’s home, available for adoption, after a trial placement period with potential “parents”, and so there is room for new arrivals.

He is often willing to rescue any animal who most pe-ople have branded a lost cause. Only later when you see it happily wagging its tail, then you understand how little it takes to make a difference. At the ‘Family House’ there are no cages, only little cots. The dogs are mo-nitored round the clock, as if they were at a nursery, If a dog starts barking, whatever the time is, somebody gets up to see what the matter is and if they’ve made a mess, they’re immediately cleaned up. Most importantly they’re never left alone.
Members of the public can also stay and experience the job by living in some upper rooms for free and making a small donation. The able-bodied and disabled dogs live peacefully together, waiting to find a home all of their own: there are currently 32 dogs: 15 or so with carts, others blind or deaf and about seven healthy ones in-cluding one from a Spanish kennel. What really hits you is how happy they are -it goes straight to your heart. As Alessandro says: “They couldn’t care less about being disabled, they have an incredible vitality, something ex-tra. Maybe because they know they’ve had a narrow escape, who knows! 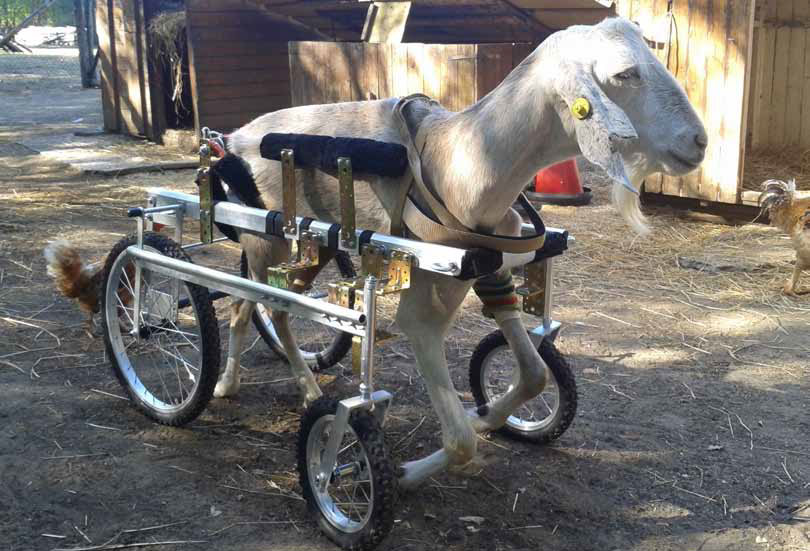 By saving 15 disabled dogs, I ha-ven’t saved the world but I hope, through the example of their disability, I can also get people to accept human disability. I’d like schoolchildren to visit us and see how the disabled are not to be pitied, but loved and treated as equals. Dogs have two basic needs – to eat and mark their territory – so a cart doesn’t bother them. But that’s not enough for me. On protest marches, when I see adults and children in wheel-chairs, I’d like to see dogs with their carts. I have a dream: let’s learn from them. Disabled people sometimes feel they have to live their lives to reflect the society they’re in, a society where you have to be beautiful and perfect. Dogs can show you who the fool is – disability is only in our heads.”