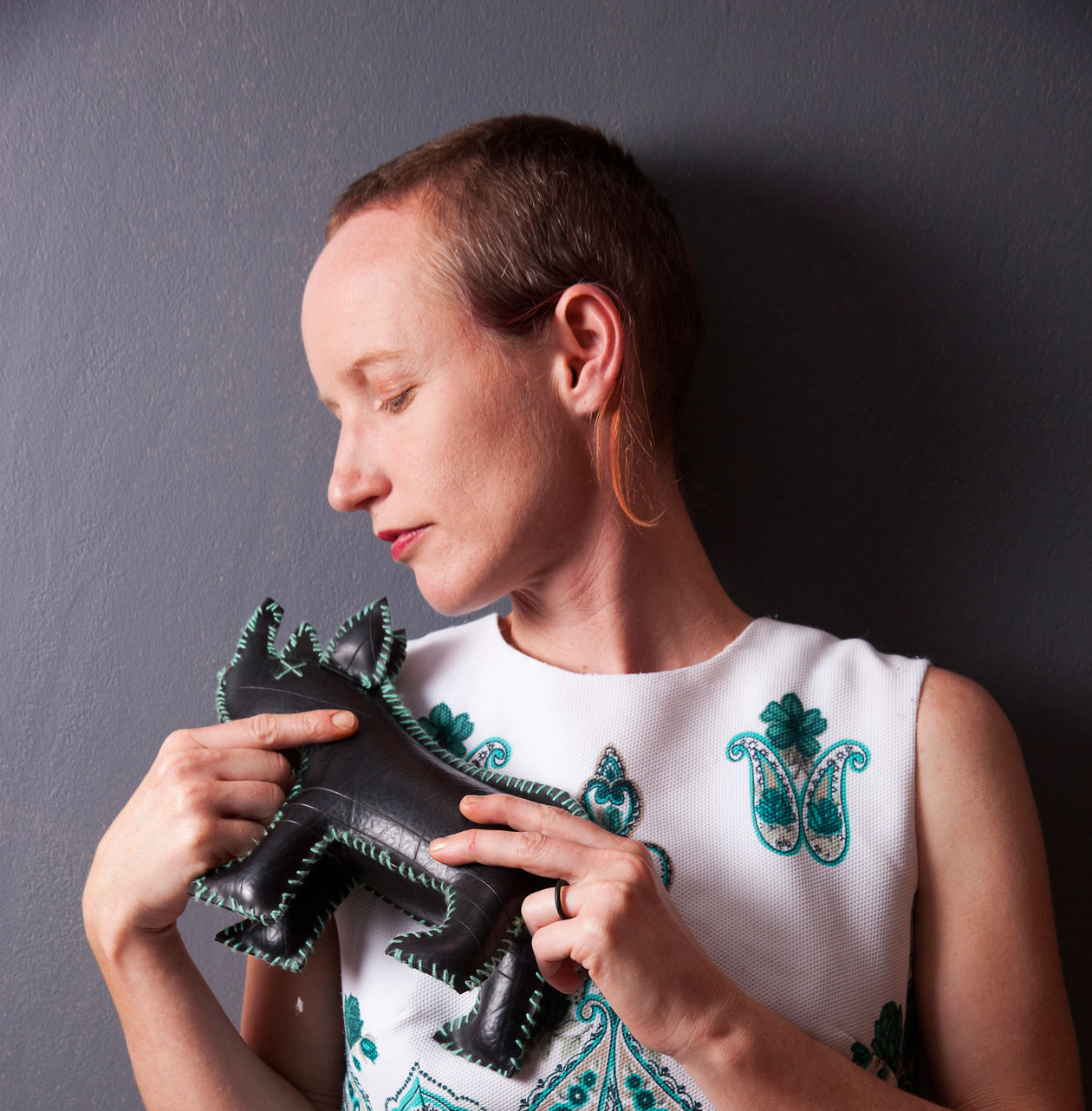 How do you combine recycling rubber, fairy tales and embroidery to create ground-breaking art AND then have the inspiration to design an award-winning new line in children’s toys that are taking the world by storm. Dantemag reveals the jewel that is the South African artist, Hannalie Taute.

It is almost unsurprising to discover that the small coastal town of Stillbay is also known as the Bay of Sleeping Beauty. It is here where South African artist Hannalie Taute lives and works; where she creates her fairy tale-inspired iconic works using rubber as her primary medium. The local art supply shop may be limited, but it is of no consequence to her. She needs a tyre supplier and there is a tyre supply shop in almost every small South African town. With the recent addition of embroidery to her work she is quick to point out that while haberdashery shops may be going out of fashion in the big cities, the same is not true in Stillbay and not in any of the small towns in the area. She is also not reliant on a specialist art framer – she has long settled on re-working any form of vintage frame for the presentation of her work, often including the framing as part of the broader narrative. More recently she has changed her method of work, and is now stretching her rubber like a canvas. 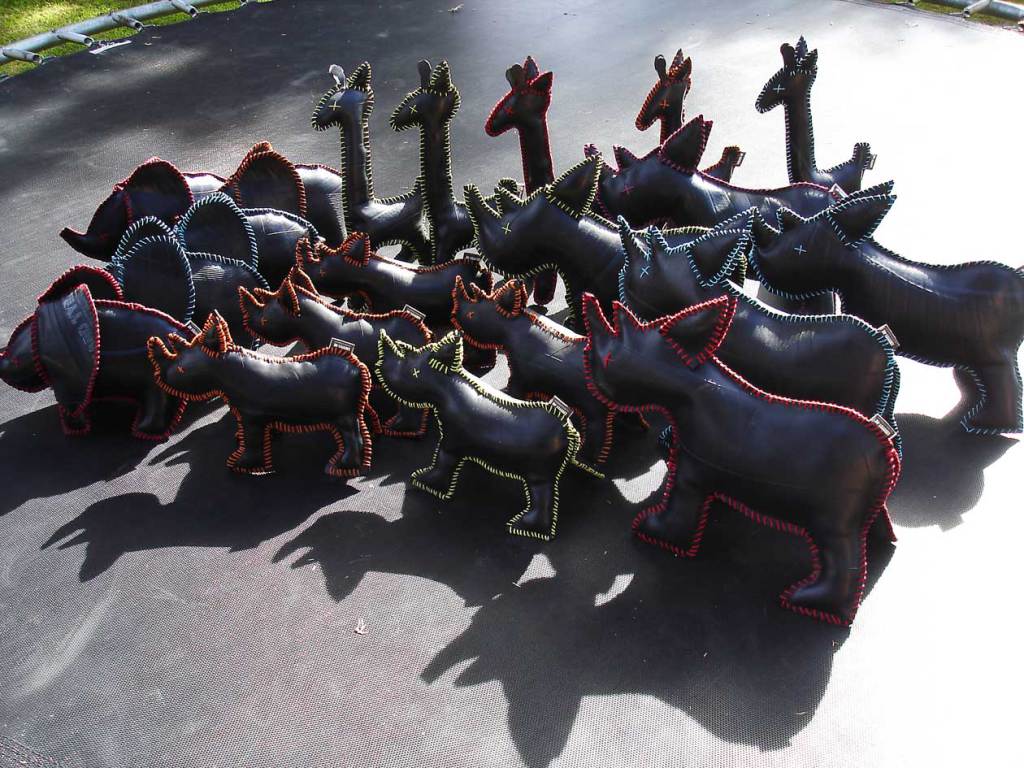 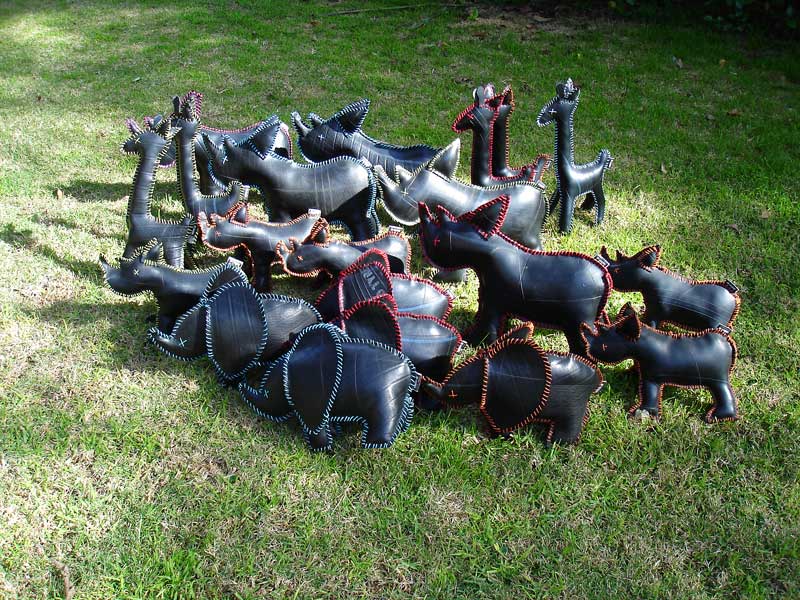 Taute found herself catapulted into the limelight after a successful exhibition in March 2014. She says it is comforting to know that Cape Town is only a four hour-drive away, but having found a reliable courier service and a fast internet connection, she sees no reason to leave her Stillbay studio. 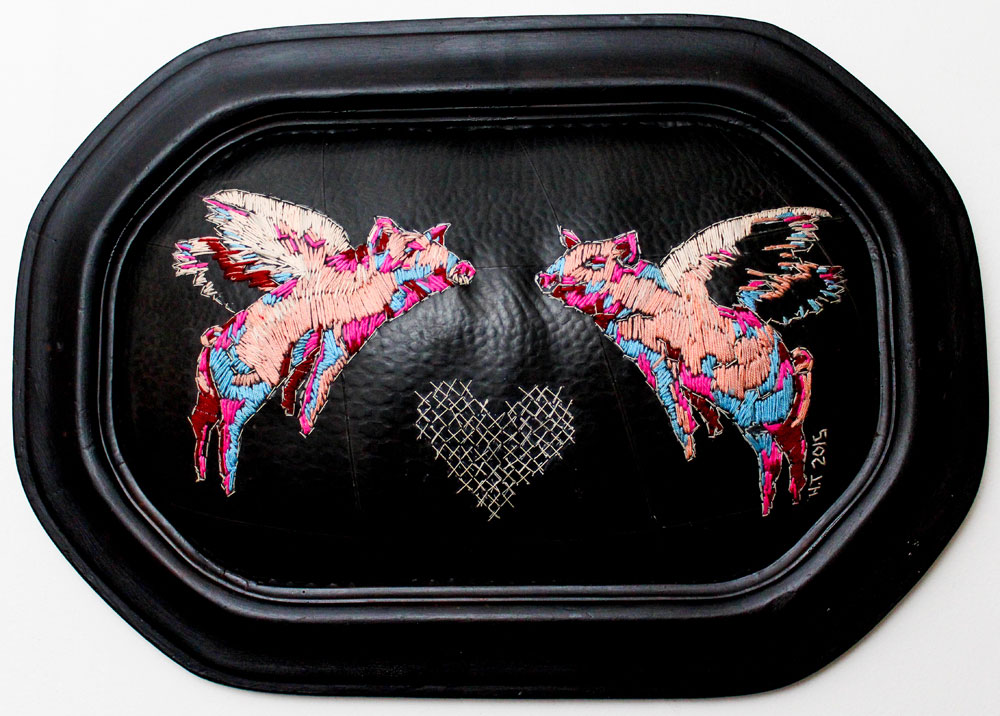 Taute studied fine art, and in a recent interview confirmed that she was always going to be an artist. When her husband’s job took them to a small town, she continued with her career, alongside the primary focus of being a mother. With limited time and access to material she continued to participate in select group exhibitions. She entered the important competitions and eventually found a gallery, Knysna Fine Arts, in the nearby town of Knysna. 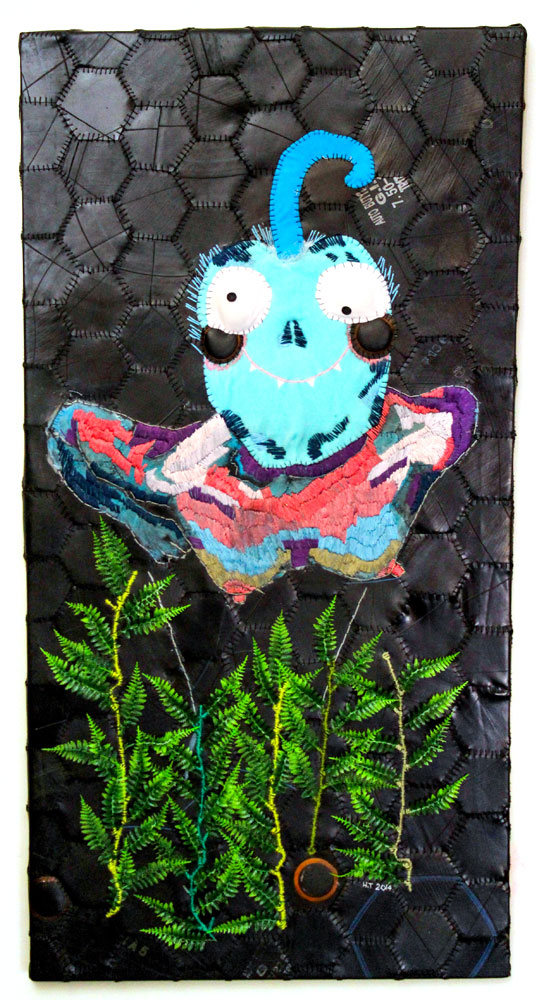 She then worked in a variety of media, most often re-constituting the meaning of found objects, or creating works using pattern paper. Toys and references to fairy tales have long informed her work. She attributes her interest in them to discovering the writing of Marina Warner, in particular From the Beast to the Blonde. Shei Shonangon’s Pillow Book made an impression as well as Bruno Bettleheim’s, The Uses of Enchantment. She has always loved books, and living in a small town has only increased that appetite. She has a long list of books which awaits her reading, and she is currently enjoying a slow read of Nick Cave’s Death of Bunny Monroe. 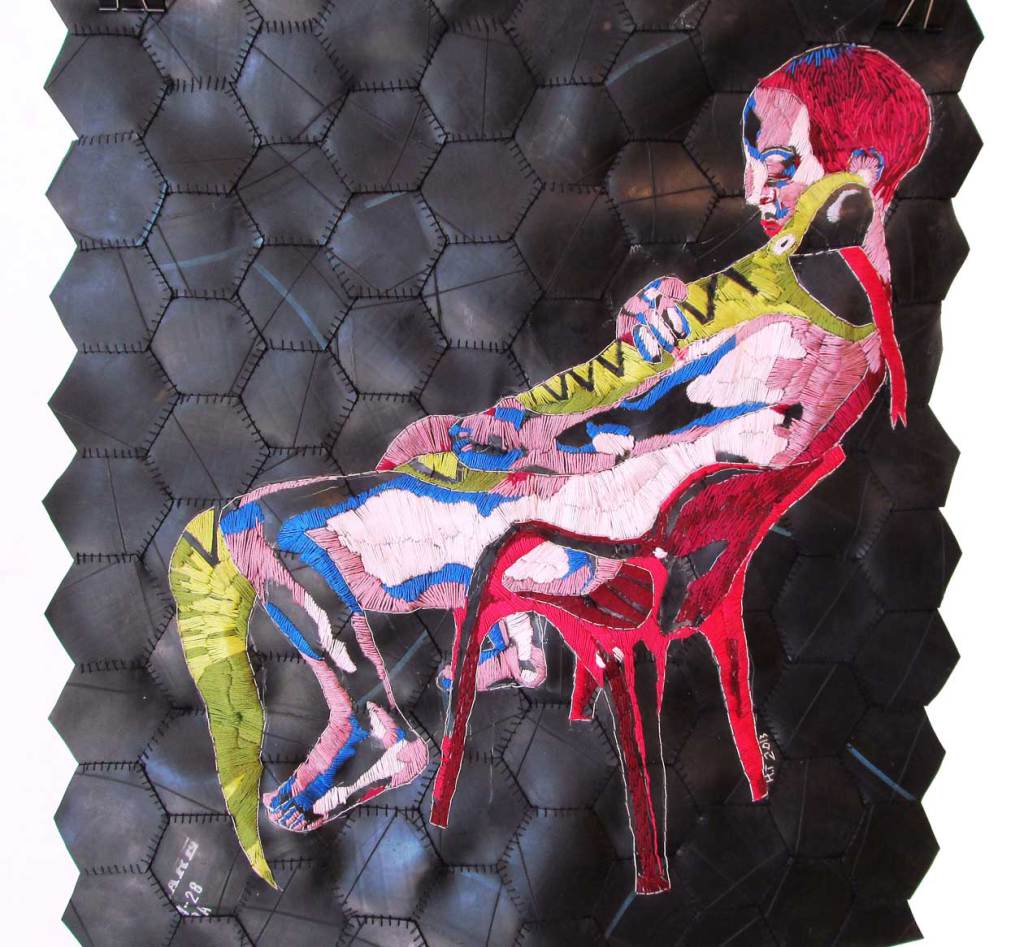 Taute had never tried her hand at making actual children’s toys; when she finally did, it was out of frustration, more than by design. She was searching for alternative options to the mass-produced plastic choices offered in supermarkets and toyshops. She wanted her children to play with something other than plastic. She considered rubber because it was easily available, eco-friendly, non-toxic, durable – and it also felt good! Her small animal toys became popular and in September 2011 she launched a series called Lobotoy-me, which went on exhibition at the international COP 17 Green Symposium in Durban, South Africa. 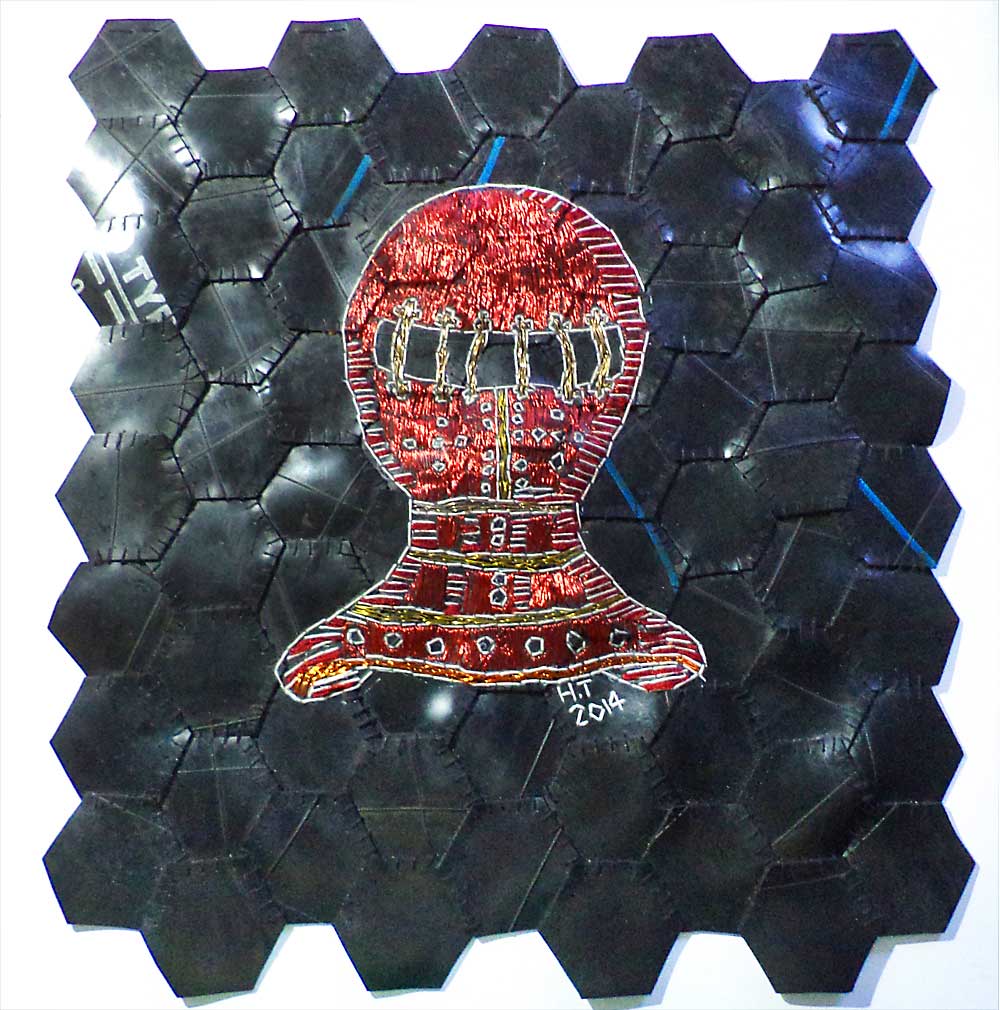 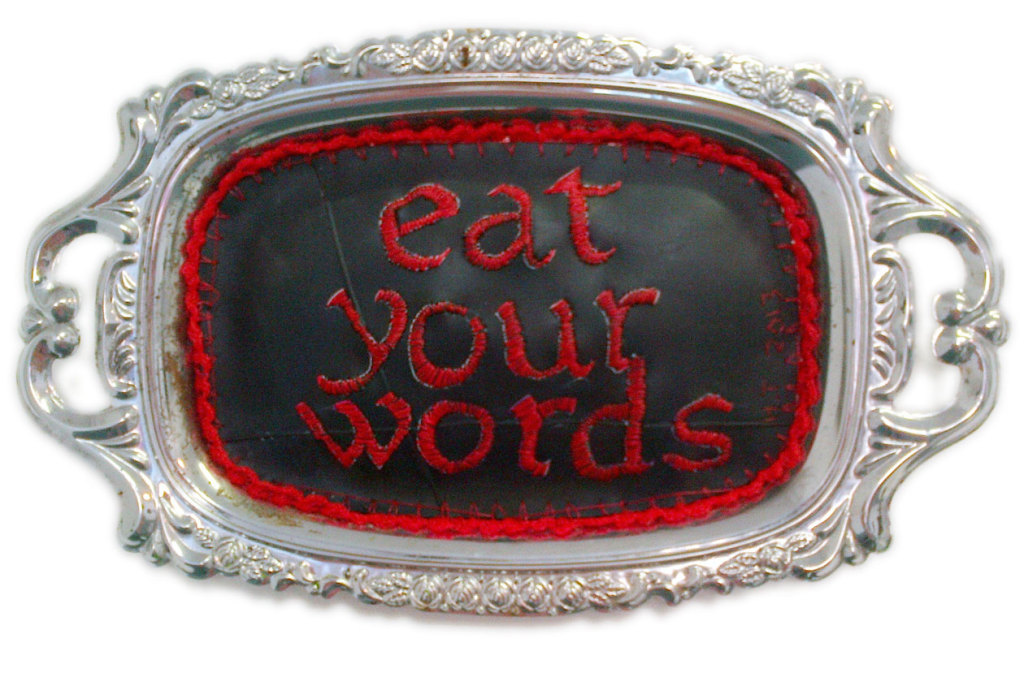 Her work did not go unnoticed in Durban and in 2012 she was invited by the Cape Craft and Design Institute to exhibit at the internationally-renowned Design Indaba in Cape Town, South Africa’s premier design event. Here, Taute’s rubber toys found a growing market. She made linkages with anti-poaching agencies and donated a portion of the sale price to charities. But at the same time she found herself at a crossroads. Her own children had outgrown their need for soft alternative toys and she found she had more time, and a great desire to accelerate the process of working with rubber; she wanted to move beyond the confines of function – it was time to add content. The breakthrough came as a result of a request from a client to add a child’s name to one of her rubber toys. She tried a few options but it was with a needle and thread that she found success. Using embroidery she was now able to combine various strands in her work, so to speak; rubber is the starting point onto which she carefully stitches her very topical issues and comments. 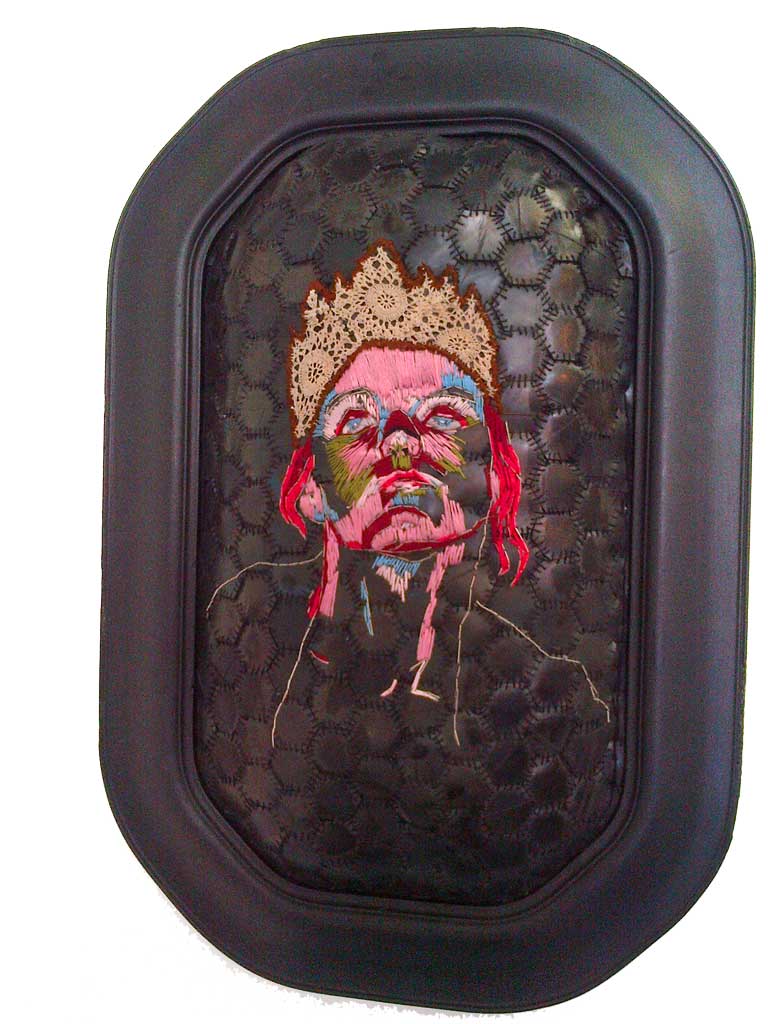 Taute is not the first South African artist to work in rubber; Andries Botha created monumental sculptural works in the early1990s and Nicholas Hlobo is an internationally renowned artist known for his rubber installations. Working in rubber suits Taute’s conscience; it is a re-purposing of a waste material, with the added bonus that it is accessible. The masculinity of the medium, combined with the femininity of embroidery is a perfect vehicle for her focus on feminist issues. She has discovered the huge advantages and potential of working with this material. She is excited by the idea of taking her works completely out of the traditional framed presentation and has embarked on making her rubber canvas much larger. Fairy tales are short stories, and the much larger surface provides the opportunity to explore her provocative interpretations in greater depth and detail.

Not part of the fairytale, but hang in there” embroidery on rubber/inner tube

Taute’s first solo exhibition Rubber Ever After was presented at the Klein Karoo National Arts Festival in March 2014. She presented a full body of work, constituting more than thirty individual pieces, and she hosted daily live performances. She explains she is not necessarily a performance artist – she just loves dressing up in a fairytale character outfit, which she makes herself by using her rubber off-cuts and vintage dresses she has found. Her exhibition received critical acclaim and she became known as ‘The Rubber Lady’. A month later she beat a host of other nominees and received the award for the best exhibition at the festival. 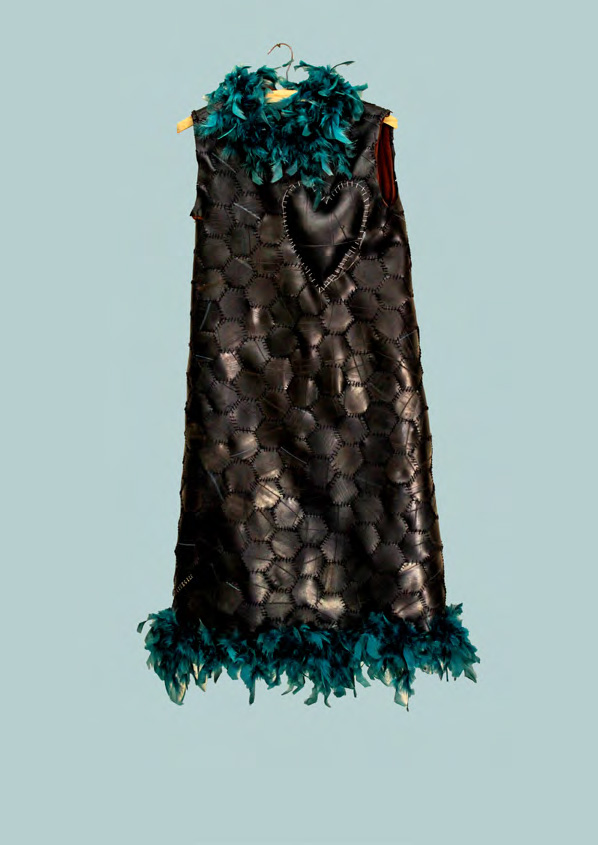 Dress designed and made by the artist Hannalie Taute

From the sleepy hollows of Stillbay she has been doing interviews with newspapers, magazines and radio presenters. When asked to be interviewed for television, Taute travelled to Cape Town, and she did not disappoint. Dressed in her signature brightly coloured handmade costumes, complete with a rubber-covered pith helmet, she shared the tales which inform her exciting career. She has no plans to leave Stillbay, and there is little need for that – the world has found her. 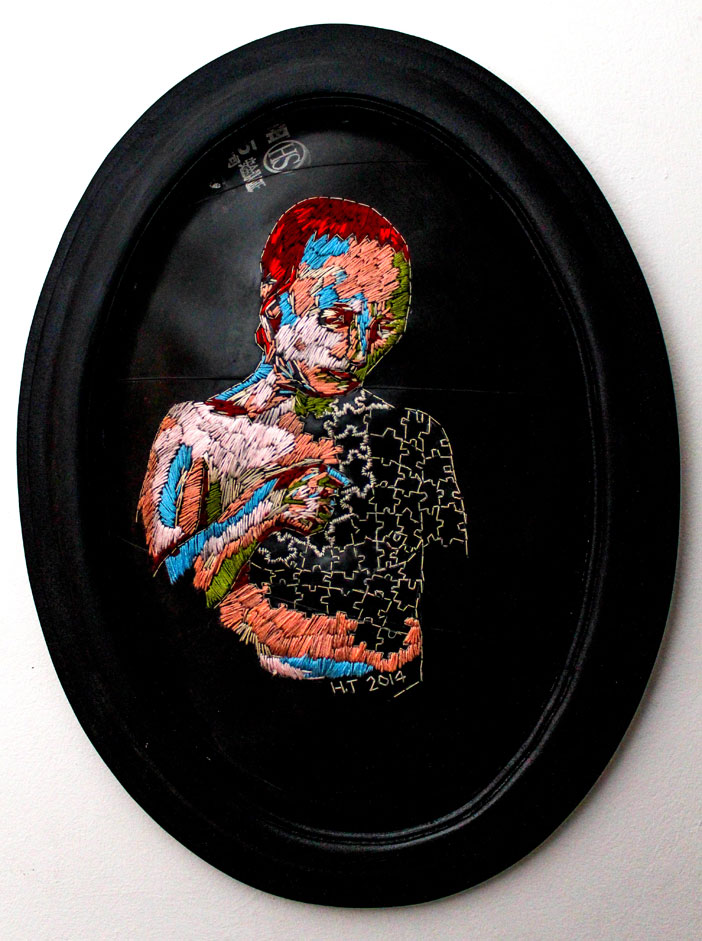 Putting the pieces back together again. 60 x 45 cm Embroidery on rubber (framed) 2014

Hannalie Taute is currently working towards her first major solo exhibition which will open in Cape Town on 10 February 2015.