With an explosion of graffiti, Egypt’s young artists, sometimes more exuberant than skilled, claim a ground for free speech and memorialising the country’s fight for freedom. It is a ground they will need to defend again and again.

CAIRO: A painted image of a tank rolling over a body. The crushed man’s hand holds an Egyptian flag, which reaches toward the sky. While the art itself may not be the most exquisite, its message is clear. For anyone familiar with Egypt’s recent past, the role of the military in the country is tenuous at best, with the Supreme Council of the Armed Forces (SCAF) having committed acts of violence against its people. That message has been driven home to the thousands who pass it daily in their cars. 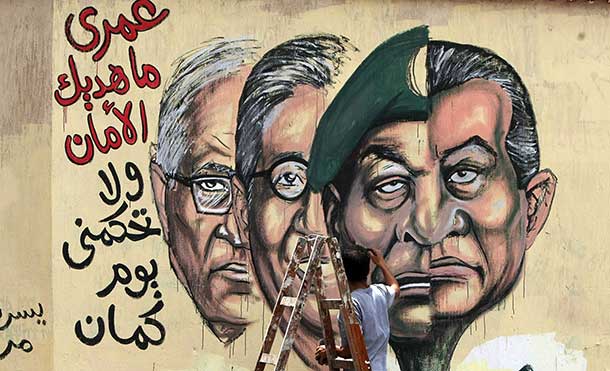 Now it has been covered by white paint, half-heartedly splashed over the black and white image. The man being crushed to death by the tank has been partially blotted out, but what has been seen cannot be unseen. The idea remains.

Across Cairo and elsewhere in Egypt, street art has sprung up on almost every wall. It ranges from angry diatribes against the military, the former government and – more recently – both liberals and conservatives to attempts at large-scale paintings that detail the horrors and hope of the revolution and Egypt’s future. 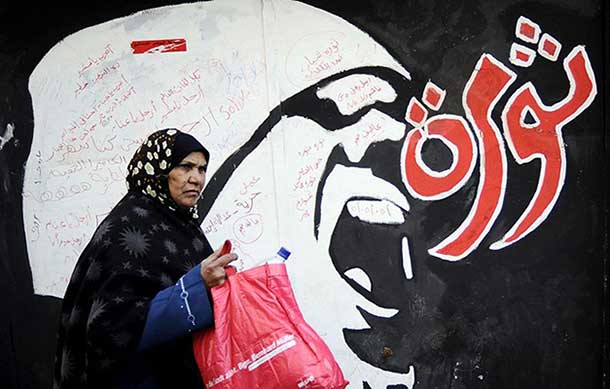 “Revolution” said graffiti outside the
American Embassy University, off
Tahrir Square in Cairo

Still, sitting in a local café with Ahmed, a self-proclaimed street artist, something is missing in the country’s newfound obsession with graffiti. Ahmed admits there is a lack of talent and imagination in how Egyptians go about the art form.

“For me, it is a way to express myself,” he begins, taking a long drag on his shisha (water-pipe) and letting white smoke billow into the roof of the poorly ventilated café. “But at the same time I look online and see all the amazing art that has been done on the streets of London, New York, LA and other places and I just feel that we are not really doing street art.” 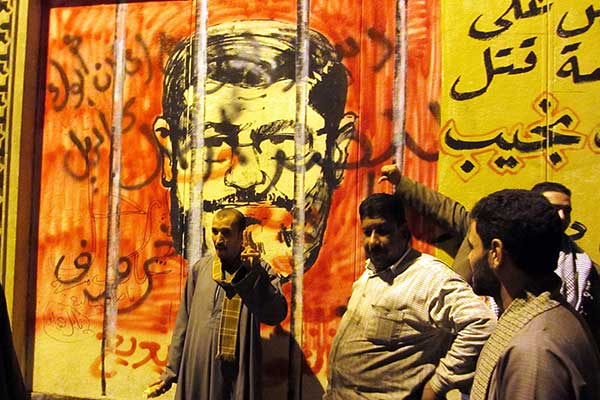 In many ways, he is right. There is little art education in Egypt, and what exists is rote memorisation of techniques. Creativity is shunned, and for those brave students who push their own imagination, they risk poor grades and with them their chances of graduating.

For the growing number of artists like Ahmed, this is a sticky conundrum. Youth like him face unemployment levels of 25 percent. As jobs grow scarcer in the country, young people have little time for creative endeavours. This translates into the graffiti seen on the streets of the country, Ahmed believes. 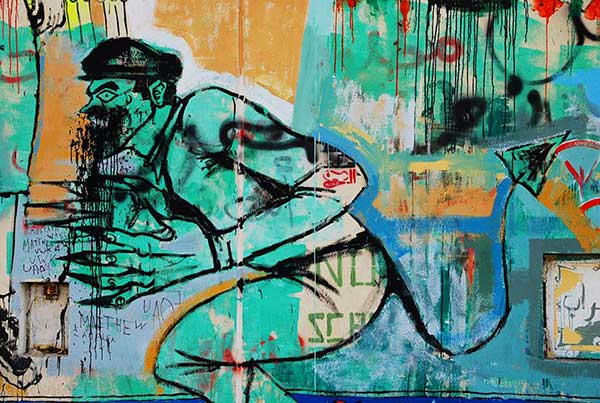 “Think about it this way,” he explains. “We are told not to be creative in school. We have no training, and then after the revolution, people start putting things on walls across the city and the western media begins to talk as if we are doing something great. We get excited and believe we are true artists, but that is because we don’t know better and the media is so quick to see anything artistic in the Arab world as charming and amazing.” 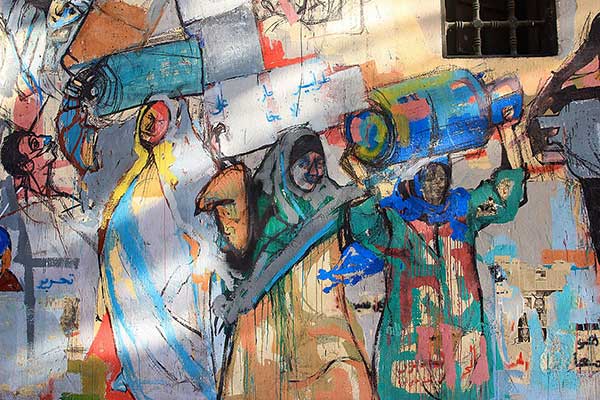 “Women with gas tanks” depicts the crisis of gas
shortages in Egypt.

This is the crux of the matter and Ahmed hits the nail directly on its head. Western media outlets have repeatedly praised art in the Arab world, but for Ahmed and his few friends around the table, they demand more from the media and from themselves.
Susanne, a young Christian girl who says she learned a few street art techniques when she lived in London a few years ago, argues that without a critical view of street art, those risking arrest to put up images on walls will “never improve and reach their potential.”
For her, she blames both the Egyptian artistic community and the media for believing that what Egyptian street artists are doing is somehow amazing.

“What is really amazing is what the true artists do in London and other cities. When I was in London last time, I saw an entire mural that was small squares created to portray the riots and police brutality,” she begins. “This is what I call true artistic merit. What we do here are school projects, but nobody says anything. This is not right.” 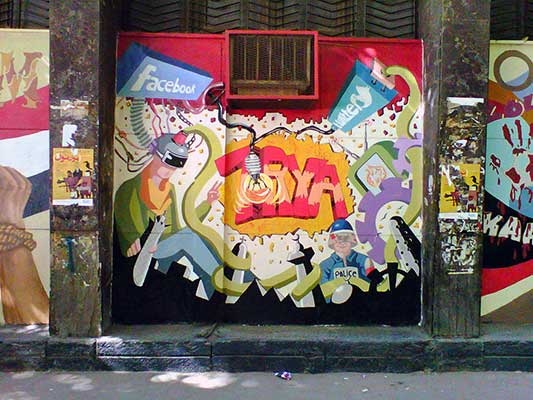 One of a series of murals in Zamalek

She dubs it orientalism, albeit positive, and says that if western writers truly wanted to be a part of the dramatic changes in the region and in Egypt particularly, they “would not just praise every single little action that we do that is western-like as amazing. This is like telling people that Egyptians are so hospitable and nice. Have they been on these streets?”

Still, whether aesthetically crude or elegantly executed, graffiti has become a part of Egyptian revolutionary culture. So when the government painted over street art on Mohammed Mahmoud Street just off Tahrir Square in October – art memorialising the street protests in November 2011 that saw dozens of people killed during clashes with police – there was widespread anger among activists and artists.

The government removed a large graffiti mural on the wall of the American University in Cairo (AUC) building on the street in downtown Cairo late one night. The mural had been painted to honour those who died in the January 2011 revolution and the November clashes that occurred on the same street. 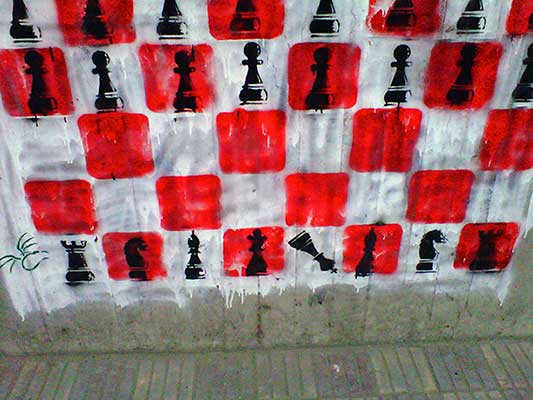 Activists shared a photo on social networking sites showing a man painting over the art and called on street artists to go back and redo the art scene, defying the government’s decision to “beautify” Tahrir Square its own way.

Less than twenty-four hours later, new graffiti was posted that featured a young man poking his tongue out at the government while the caption reads: “Erase again, you coward regime.”

Nearby Tahrir Square had become a free speech zone – often in street art form – for artists to express their take on current events and commemorate those who lost their lives for change. 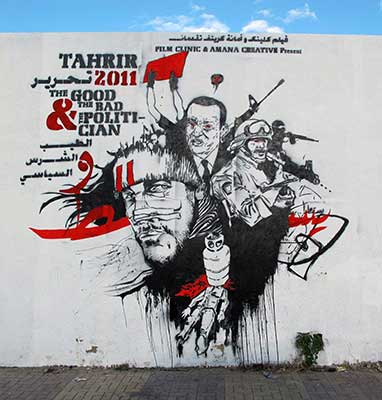 Prime Minister Hisham Qandeel visited the iconic square shortly before the incident and ordered the removal of street vendors and sidewalk sellers in order to turn the square into an international site for visitors. It remains much this way today, without the convoluted mess of street carts lurking for unsuspecting customers. 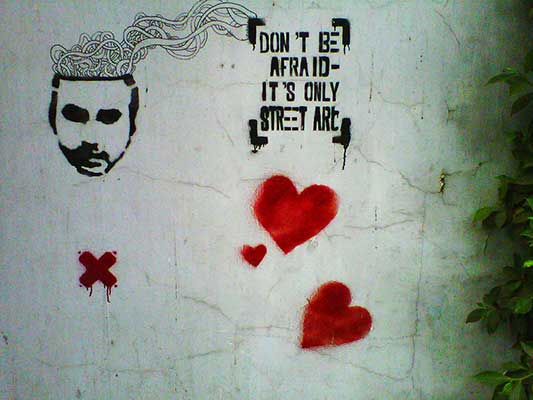 A stencil in Maadi

In many ways, graffiti had become a voice for activists to express themselves and the walls along Mohammed Mahmoud Street had been covered in the street art for months.
For Ahmed and Susanne, they felt the artists’ pain, many of whom had spent hours on the street creating their works. But at the same time they want to urge Egyptians to look inside themselves and begin to examine how art, including street art, can grow in the new Egypt in order to increase individuality and creativity. 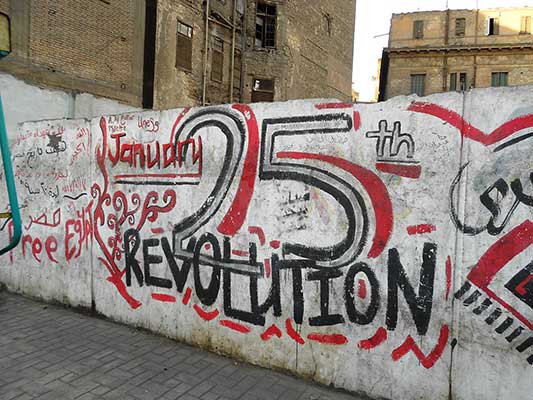 “Street art is so important for the country and we are making solid movement on this concept, but there must be more serious examination of how art and its forms are constructed in Egypt,” said Susanne. “We have to study and learn before we begin to think we are great. The media coverage and online activists can only take this so far. We need real artists in Egypt who are ready to take criticism and not freak out. That is art.”