Chihuly Over Seattle: Illuminating a Major Artist in His Own Home Town

Humour is a form of feeling. Comedy is not a matter of instinct, but springs from intelligence and a cultured mind,and its sole purpose is not only to make us laugh or just smile, but often to leave us in thoughtful meditation. Plutarch gave us a beautiful definition of humour: “joke seriously.” which also proves that humour is not branded English, as some claim, but Greek and then Latin. Plutarch, Horace, Cicero and Martial, to name a few, were born years before Jerome K. Jerome and Bernard Shaw. And, as evidence of changing times – in among all these men – ladies and gentlemen, we give you a female ….. Pam Ann.

I know some learned chauvinist purists might raise their eyebrows at this, but now that we’ve got your full attention we can announce we wanted to end this year full of doom and gloom with a bit of fun. Glamorous, hilarious and outrageous Pucci-clad, Melbourne-born Pam Ann is the alter-ego of Aussie comedienne, creator, writer and producer Caroline Reid, whose portrayal of the gutsy, curvaceous air-hostess takes us on a unique voyage round the world of comedy. So, in view of the upcoming holidays, she can give advice to people who can afford to travel in style, and cheer up those who can only dream of going away this year.

And to the erudite among us ….well, she has a few lessons for you, too, here and there. So fasten your safety belts and get ready to rumble. 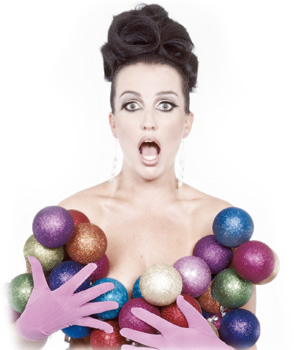 Let us turn to serious matters

Pam Ann has been featured in an internet advertising campaign for British Airways with over 1.25m views in a 6 week period. Qantas has Pam Ann’s live DVD “Come Fly With Me” as part of their in-flight programming. Most recently, Pam Ann has been working closely with JetBlue in the US. In Australia, Pam Ann starred in her own television talk show, The Pam Ann Show, on the national Foxtel comedy channel. She also appeared on the TV shows Project Runway UK and Britain’s Next Top Model. 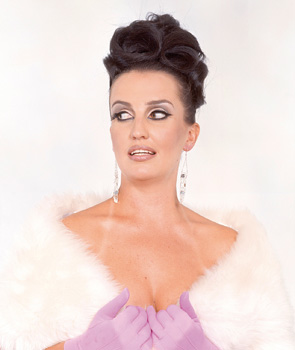 Pam Ann has performed at the highly acclaimed London Palladium and at the 3600-seater Hammersmith Apollo London. From New York’s Hammerstein Ballroom to Sydney’s iconic State Theatre to Melbourne’s Athenaeum, her sellout worldwide tour in 2012 landed her in Germany, Sweden, Denmark, Belgium, Netherlands, and France. She touched down for the first time in Poland, Italy, Portugal and Spain, as well. So with such a busy schedule it has been quite difficult to pin her down. She did manage to find some time between long hauls to talk to Dante in her private lounge in Berlin, just before take- off for one of her shows. 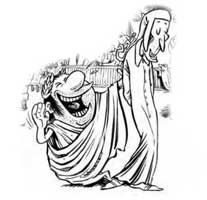 Aut insanit homo, aut versus facit
Man is either insane or he is writing poetry.

In her case, it’s more like creating characters. She has quite a few, I can tell you! – and she keeps updating them – from Lily, the Singaporean-Chinese flight attendant who would sacrifice passenger safety for her expensive, designer handbag, to Valerie the ageing American flight attendant from Texas. There is Vanity, the sultry woman in red – a clear parody of Virgin Atlantic, and Vespa, a perky Italian who greets passengers with “Ciao! Bellissimo! Donatellaversace!” These are just a few from the total of eighteen characters she claims are variously born from her friends’ stories and from her own observations of cabin crews and airline folk. But I wonder . . . what service does she get when flying, considering the picture she gives of the air hostess? Caroline confirms she has very good relationships with the cabin crews whenever she flies as passenger, because she has the utmost respect for them. She is hugely passionate about what they do.

Pam Ann was born in 1996 when Reid attended a James Bond-themed birthday party. She dressed up as a Pan American air hostess from the 1960s (as 007 only ever flew Pan Am). During the party, as the level of booze increased, her friends started calling her Pan Am. The more drinks they had, the more it sounded like PAM ANN – the rest is – aviation – history!.

So where does Pam Ann end and Caroline begin, I ask, as she looks in the mirror, putting her make up on.

“When I step off the stage, Pam Ann ends and Caroline begins,” she says, “but to some people I’m Pam Ann all the time.” When she isn’t working, Reid claims to be a very low-key and quite boring person. She assures me she doesn’t drink, she leads a healthy lifestyle, loves watching TV, cooking, and spends a lot of time at home on her own. Mind you, she does have one addiction: boxing. She trains everyday with a pro boxer when she’s home in New York City. (I wonder if that helps with her punch lines. Boom, boom!)

“I was a shy girl with an imagination that dreamt of becoming an Olympic skater, so I guess I’m still the same. I love my own company,” she says with a smile. Her ideal evening out is with close friends having a great meal together and wonderful conversation.

I imagine it could be tiring to entertain people all around the world, so I ask her how she copes. “It can be tiring psychologically,” she says, “ because you always have to be in top form. It’s also good to be fit, as it takes a lot of energy. I become a recluse on tour. I don’t see anyone, only my work colleagues, and some ‘obscure’ journalist from England. [Laughter]. I’m totally consumed in my work. I won’t even leave my hotel room when I’m on tour. It’s just my process”.

On the subject of how she manages to cross cultural barriers with her humour, she says that when writing her scripts she takes her inspiration from books which are fearless and break boundaries with race, religion, and cultures.

It sounds just like the divine comedy, so why not let her play Dante and name a contemporay person in heaven, in purgatory, and in hell while she completes the transformation into her character. She quickly rises to the occasion and lists Mahmoud Ahmadinejad in heaven to spice things up a bit. “I like the sound of purgatory so I would put myself there because I think fun people will be there. And I’d put the Pope in hell because he wouldn’t expect it, and I’d like to see his face after working so hard to get to heaven”. 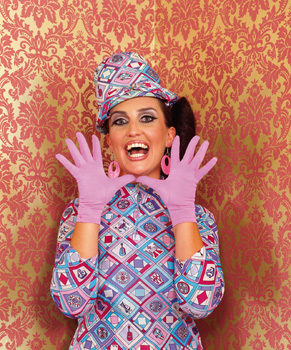 Dulce est desipere in Loco,
It is delightful to play the fool.

Now, with the make-up done, she puts on that hat, turns around and hey presto,Pam Ann is ready to fly!. And that means I have only a few minutes left before she hops on board.

MG. Hello, Pam, where are you taking us for the end of year festivities to help us shrug off a bit of this economic gloom and doom?
PAM ANN. New York City is the best city in the world. So pack your bags, jump on an A380 and get yourselves there.

MG. And if you’re out of work and don’t have any money?
PAM ANN. If you’ve got no money then stay at home and relax. Enjoy being unemployed

MG. And what do you recommend?
PAM ANN. Do I need to spell it out for you?

MG. Not for me. For the unemployed.
PAM ANN. OK, OK. They say that necessity is the mother of all invention, right?

MG. Right.
PAM ANN. So, go to your mother. Or invent something.

MG. What’s your best tip an insider like you can give about flying budget airlines?
PAM ANN. Avoid it 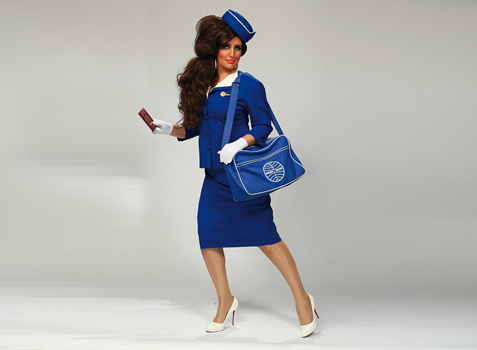 It is your problem too when your neighbour’s wall is on fire.

MG. Let’s say you’re on a flight full of Greeks going to Athens when the world ‘s most powerful woman, German chancellor Angela Merkel, comes on board and orders the plane to fly to Frankfurt. What would you do?
PAM ANN. I’ve nothing but praise for the Greeks .

MG. Ok!. And what should they do?
PAM ANN. Lick her p…y and keep on to Athens!

MG. If you went on holiday and you could take ten people along with you, who would you choose?
PAM ANN. Joan Rivers, for a laugh. Obama, for security. Reggie Bush, for sex. Gordon Ramsay, for food. Richard Branson, to fly us there. Jay Z and Beyonce, for music and conversation. Chris Rock – more laughs. Kate and Wills, for some topless bathing

MG. Where would you take them? What’s your ideal holiday destination?
PAM ANN. Mykonos 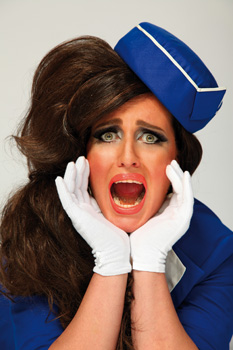 Coelum non animum mutant qui trans mare currunt.
Those who cross the sea, change skies but not their soul.

MG. A high flying hostess like you must’ve met a lot of celebrities. Can you divulge some confidential information, and tell us who were the best- and the worst-behaved?
PAM ANN. Victoria Beckham hates flying. Cher wanted me to turn back time – I could only knock ten hours off, taking her to Australia. Madonna loves making prank calls, and the biggest bit of gossip is I carried Elton and David’s baby Zachary.

MG. What’s the best arline to fly with and where do you get the best in-flight food ?
PAM ANN. British Airways is my preferred long-haul carrier for its consistency and the Club Class configuration on its 747s. Virgin Atlantic for transatlantic flights is great “Good night” service. Jetblue is my favourite domestically throughout the US, for extra leg room and TV on board. Lufthansa has an amazing First Class service of excellence. They even sprinkle rose petals. Air France is great for its Va Va Voom, and KLM because they give you a Delft house! Airlines and food – you can’t beat the Asians for inflight food.

MG. What projects has Pam Ann got lined up for 2013?
PAM ANN. I’ll be back in the UK on tour in February and March. I’m putting together a big show with a superstar line-up at The Apollo Harlem in April; a USA tour in May; and I’m writing a movie and taking some time off touring and doing more work in the States.

MG. What ‘s the movie all about? Can you tell us?
PAM ANN. I can’t say too much. Let’s just say it’s a comedy – and a very dark dirty filthy comedy – starring Pam Ann!

A knock at the door reminds us my time is up now. Berlin is ready for the landing of the shy girl from Australia with the imagination that crosses boundaries. Whether as a trolly-dolly from hell to remind us the era of glamourous travelling has come to an end and how many other things have changed in our lives, research has shown that the health benefits of laughter are far-ranging. Laughter reduces the level of stress hormones, helps relieve pain and even boosts your immune system .

So whatever, wherever, with whomever you celebrate the end of the year, remember:

Aequam memento rebus in arduis servare mentem.
In times of adversity, remember to keep an even mind.

Happy new year to all Dante readers from PaM Ann and from us.

For all updates go to www.pamann.com