/ Non categorizzato @it / The fire in Saturn’s Shadow 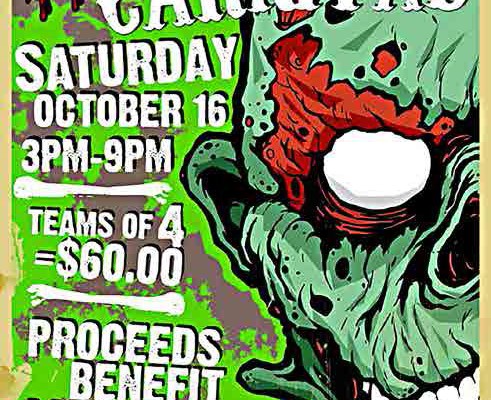 Carnivals are just an excuse for a party and dress up – right? Wrong! Mike Hawthorne reveals how, once again, seemingly hackneyed modern customs stem from pre-Christian beliefs and rites and how across the world the establishment grew scared of the dark subversive possibilities the original rituals represented.

When you crumble a fistful of earth between your fingers, you are touching the essence of the ancient Roman god Saturn, a mixture of life and death. The individual elements originated in stardust, but they had to live, die and decay, washed by rain and scorched by sunlight, before becoming fertile soil, sustaining all terrestrial existence. Dark brown earth is not sterile sand from desert rocks, but a mixture of rotten organic matter; leaves, trees, blood, microbes, faeces, dead beasts and, of course, human corpses. It contains our distant past and all our futures.
In Saturn, life was reborn from death, and he devoured his children. He was ‘the grim reaper’, who fed the human race, let it mature as the seasons passed and scythed it down, generation after generation. His mysterious consort, Lua Mater, was associated with pestilence and decomposition. The weapons of defeated enemies were burnt on her altars. Under previous names, in different cultures, similar gods demanded human sacrifices to ensure bountiful harvests. Saturn was publicly worshipped, as the power behind the agricultural cycle, during the carnival festivities of the darkest week of the northern year. After Christianity became the official imperial religion, our present Christmas/New Year holidays replaced the Roman Saturnalia at the end of December. The Catholic aspects of the celebrations still struggle to conceal their earlier roots. This also applies to Easter carnivals in springtime and many autumnal harvest festivals.
Wherever Catholic European powers enslaved Africans, the slaves often used church icons and saints as secret voodoo ‘masks’ to hide the pantheons of the Guinea coast. They gave a distinct West African flavour to the world-famous street processions, like the carnivals of Trinidad, Rio and New Orleans.
In such places, did Saturn acquire a new mask, over his Catholic one? Or was his false, Christian face cancelled out, revealing something closer to his original nature? What, exactly, was that nature? And, why were carnivals, even before Roman times, always concerned with the public behaviour of slaves? The adjective ‘saturnine’ with its modern meaning of ‘gloomy’ and ‘phlegmatic’ according to Chambers Dictionary is the opposite of Jupiter’s ‘jovial’, yet, paradoxically, carnival is a time of ostentatious consumption and merrymaking.
In fact, it is more like dancing on a grave, both physically and spiritually.
It is a time for hiding dangerous realities under bewildering disguises. Saturn’s slow, sullen aspect is the natural demeanour of the unwilling slave. In ancient days, the underworld and the subconscious threatened to break through the surface. In the darkest season, malevolent spirits, including those of the recently buried dead, were likeliest to curse the coming year with crop blights, storms, outbreaks of plague and civil disorder. Vengeful demons, targeting rigidly stratified societies, were rebuffed in confusion by the topsy-turvy spectacle of carnival. Disorientated, they would not know whom to strike.
General promiscuity blurred conventional family units. Masks hid individual identities. A prince could resemble a beggar, and vice-versa. The wicked spirits might even see creatures more frightening than themselves cavorting in the streets. The ‘evil eye’ did not know where to look. 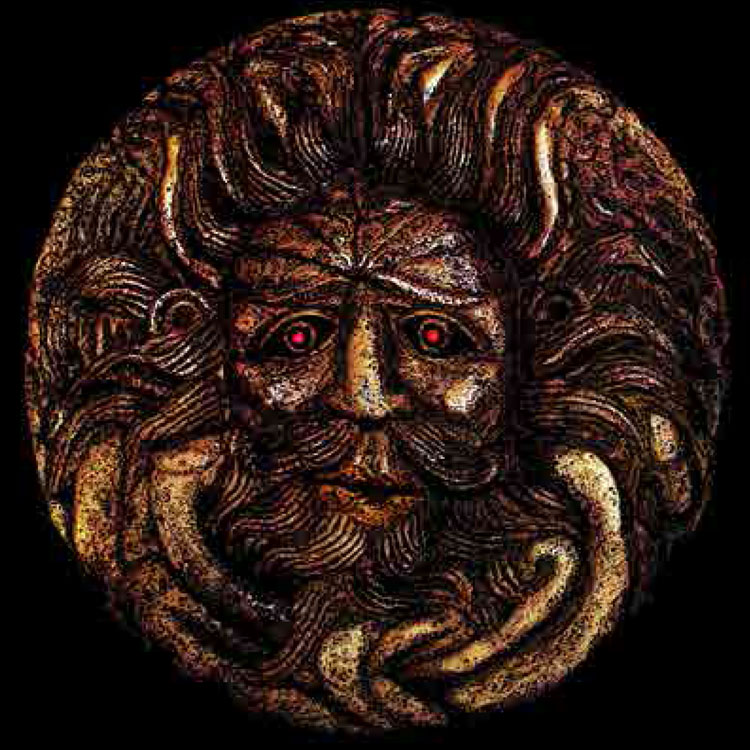 Rebellious thoughts, suppressed under the harsh laws of slave-owning societies, were simultaneously dissipated in a concentrated, but strictly timed, release of pressure. The poor forgot their miserable, workaday existence by overindulging themselves beyond the point of exhaustion. The season would start with such a bang that the return to normal duties would almost be a relief. Slaves were briefly allowed a taste of the good life that the rich enjoyed every day. Everybody discarded the conventional dress codes and danced in their glad rags. In ancient Rome, all classes wore the red Phrygian caps associated with freed slaves. These caps famously reappeared during the Terror, at the height of the French Revolution, when the people hoped to resurrect Saturn’s mythical Golden Age of Liberty, Equality and Fraternity as a political system. They danced around decorated ‘liberty trees’. Once the Revolution had triumphed and the red caps had become symbols of a new tyranny, fashionable rebels went to masked balls with red silk threads round their necks to imitate the slice of the guillotine.
Carnival always contained such subversive elements. One of the earliest examples originated in a victory celebration in Syria, when the Persian king, Cyrus the Elder, slaughtered a tribe of Scythian nomads who had become helplessly drunk after looting a conquered town. A temporary, mock ‘king’ – actually a condemned criminal – presided over the festival. He was executed afterwards, perhaps inspiring the later New Testament story, when Roman legionaries from Syria had cruel fun with Jesus before his crucifixion. His thematic associations with Dionysian wine and Demeter’s corn became the Christian mass. The Jesus figure retained familiar aspects of Bronze Age fertility gods and their royal human intercessors, dying for the greater good of the community. Recently, charismatic evangelists popularised the ‘Lord of the Dance’ idea, linking Jesus to the idea of life as a cosmic carnival celebration.
Secular versions of black American church music made most of the world move to their rhythms.
During the ancient Persian holiday, each household appointed a slave as master of ceremonies to lord it over his masters. The first were last, and the last first. Ordinary citizens then mixed freely with high-class ladies in a drunken orgy. They all wore ‘Scythian’ clothes. These barbaric garments were feared and despised, as those of a merciless tribe of nomadic horsemen. Somehow, using their clothes as fancy dress in a make-believe re-enactment, diminished the traditional enemies’ psychological power. It also satisfied the secret envious desire that often lies behind both personal hatreds and culture clashes.
In modern carnivals, all sorts of ‘baddies’ appear. During one procession in Trinidad, the streets were filled with black dancers in German Nazi uniforms, happily ‘Sieg-Heiling’ to the beat, years before Prince Harry’s party stunt. Whatever was allowed to occur in the earliest carnivals, the ritual murder of the fake king put a dramatic stop to the proceedings, in case anybody got funny ideas about permanent equality.
During the Middle Ages, Europe turned inward. Armoured thugs called knights enforced a feudal system to benefit their robber-baron masters. The arts and public celebrations were dedicated to glorifying the Catholic Church in combination with this aristocracy. Medieval Islam was more progressive and liberal than Christendom. The illiterate masses timed their lives to the church calendar and had to attend services dominated by ‘pie-in-the-sky’ visions of heaven and gruesome murals of sinners burning in hell. The ‘pie-on-earth’ spirit of carnival emerged during agricultural festivals and trade fairs, always on a particular saint’s day, often beside bible-based ‘Mystery Play’ performances.

Some historians date the end of the Middle Ages to the aftermath of the great Black Death pandemic. After this trauma, Europeans woke up to a series of new worlds in every sphere of life. It was as if they had survived the end of time and could start again. THAT idea, of total renewal, is at the heart of carnival. Men like Rabelais in literature, and Breughel in painting, gave expression to a revitalised, satirical, rebellious carnival spirit, as Europe prepared to conquer the earth. That momentum was finally lost in 1914, 100 years ago, at the beginning of a mad, high-tech killing spree that still continues in any modern theatre of war. We are still trying to understand the implications. One thing is for certain; tyrannies will always promote solemn, militarist processions and suppress real carnivals. The bosses don’t like being laughed at. The riot police are ready, eager to crack skulls, at the slightest sign of disorder.
Nowadays, in our developed, globalised, urban, post-nomadic, post-agricultural, often post-industrial festivities, we can rarely enjoy the full, delirious illusion of a proper, rip-roaring carnival in the old style. For a start, it is difficult to find a place to park the car, and you cannot drink and drive.
Masses of police must be deployed and paid overtime. Better stay indoors.
Ninety percent of public celebrations are experienced passively by watching television. We have lost touch with the spiritual dimensions too. The festivities have become marketing opportunities, corporate sponsored events and tourist packages. For many, the Golden Age of the slave ruling the master has given way to a grope in the stationery cupboard, during the annual office party, or an orchestrated binge in some godforsaken holiday resort.

In my country, England, a debased mini-carnival can be witnessed every Saturday, when the shops have finally closed, as young drunks vomit and struggle with bouncers on the high street. Hospital emergency admissions peak dramatically. It is, after all, even in the flickering light of the onscreen football, still Saturn’s day. A bit of blood among the spilt booze and thumping music might put the ghost of a smile on the forgotten fertility god’s face.
However, this joyless business is more suited to Saturn’s son Pluto, the god of money in the kingdom of the dead, and his holy scripture, the mortgage contract. The slaves do not even know who they are anymore. Welcome to the Carnival of the Zombies.