Cash is king? The case for real money 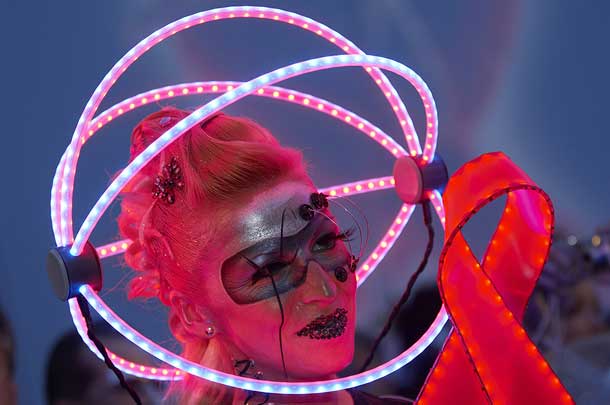 By end of February each year, the Viennese are quite satiated with grand parties and stately balls. The seasonal calendar is spilling over with festivities throughout the Carnival period or “Fasching” as they like to call it.

However, by May, Vienna shakes off the last signs of a rough winter, embraces spring with open arms, and expectantly awaits the annual Life Ball. It promises glamour and exuberance, excitement and celebration to a sleepy city. It truly is a spring awakening!

Since its beginnings some twenty years ago, the Life Ball has grown to become the largest charity event of its kind worldwide. It attracts celebrities from all walks of life who gather to raise money to fight HIV and AIDS, but also to heighten awareness and to encourage social acceptance of those stigmatised by the disease.

The Ball first took place in 1993 and is the creative baby of one single man. Austrian born Gery Keszler was brought up in a small town outside Vienna. After attending a technical high school, he left to work in Australia where his father had emigrated to after leaving the family and running off with Gery’s mother’s best friend. You need hardly have the insight of a psychologist to understand where the young man’s drive emerged from – an energy and motivation that remains the force behind the success of his life’s work. 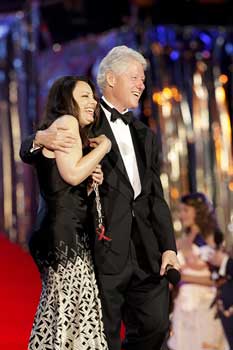 As a young man he tried many different kinds of work – he even earned his money as a circus cook at one point – and eventually found recognition as a make-up artist in the late 1980s in Paris. There he mingled with the fashion crowd and worked with many famous designers, stylists and musicians. Openly gay, Keszler soon became sensitive to the disease that was spreading through the community: HIV/AIDS. Together with a group of friends, and under the guidance of Dr. Torgom Petrosian, a doctor in charge of a drug counselling centre in Vienna, Keszler founded the AIDS LIFE Association in 1992. Its aim was to fight AIDS but also to “promote awareness and public consciousness” of the disease in the minds and hearts of mainstream society.

Keszler, who will turn fifty this July, remembers how at the time AIDS galas existed between Los Angeles and Paris but “those events were quite stiff and formal. On the other hand there were the crazy AIDS awareness parties organised by the New York gay scene – I had experienced both.” The idea of a one-off Life Ball quickly formed under the slogan “AIDS concerns us all”. The idea was to unite both homosexual and heterosexual members of society and encourage tolerance and understanding between them. “What annoyed me most back then,” he says, “was that there were clear boundaries. There were benefit events for gay people and those for straight people. However, we were seeking to establish an event for all different groups of society.” Keszler was determined and endearingly idealistic enough to want to reduce discrimination and the exclusion of people struck by the disease. 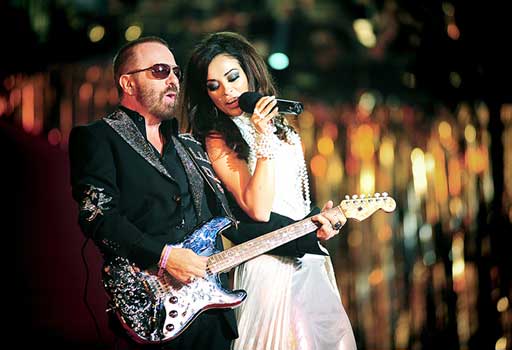 It is a sign of the strong willpower underneath the façade of the notoriously shy Keszler, that he managed to persuade the then-Mayor of Vienna, Helmut Zilk, to open the doors of the Vienna City Hall, free of charge, to host the event – a clear and courageous political statement and endorsement. The Life Ball has remained in the venue for the past twenty years.

Keszler and his small team of dedicated friends worked out of a small kitchen that he had turned into an office. They used their connections and networks from the fashion world to add a touch of sparkle and star quality to the Ball. The idea immediately took off and fashion involvement is at the core of the Life Ball up to the present day. The first one to answer Keszlers call (Gery recalls asking him on New Year’s Day on Miami Beach, where the two were the only ones up after the previous night’s party) was his friend Thierry Mugler, who was at the pinnacle of his career at the time. Fashion designers and top models, all agreeing to work without pay, have contributed to the phenomenal success of the event throughout the years. The fashion catwalk show is one of the centre pieces of the official programme and has been staged by top designers such as Jean Paul Gaultier, Roberto Cavalli, Donatella Versace, Missoni, Diesel, Vivienne Westwood, and Heatherette, to mention but a few. 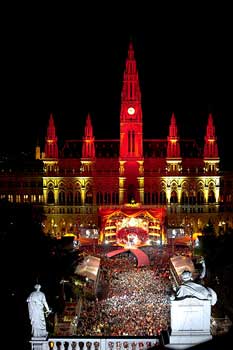 Against all odds, the first Life Ball was a huge success right from the start (though ticket sales were slow and Keszler had feared disaster and was “scared shitless” until a huge crowd showed up surprisingly at the doors on the night). Many who had eyed the ball with suspicion soon were among those begging for a ticket. Today, the tickets are generally sold out in record time and proceeds have grown to spectacular sums. Sadly, however, soon after the first Life Ball, the charismatic Petrosian, Keszler’s soul mate, died of AIDS himself. His memory has motivated Keszler to continue the Life Ball, which has not only become a highly successful brand in its own right but a serious economic growth factor in Viennese tourism.

Keszler worries that the actual focus of the Life Ball is in danger of being overshadowed by the fabulous costumes, the international celebrities and the sparkling performances that the ball boasts each year. He never tires of talking about fighting the disease, the discrimination that surrounds it and, above all, about preventing its further spread. 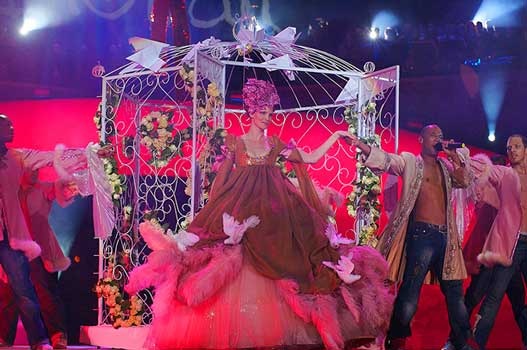 Although since the early 1990s research and prevention measures have made great progress and access to antiretroviral therapy (ART) has expanded substantially (which means that, to some extent, AIDS has mutated from a fatal to a more or less chronic disease) the amount of money spent on the fight against AIDS is not sufficient to treat everyone, as Bill Gates warned at the 2012 World AIDS Conference. In many non-industrialised countries AIDS is still the leading cause of death among those aged 15-59 and among women of reproductive age. Seven thousand people are infected with AIDS every day, among them a thousand children. A child can be treated for a cost of a mere five euros a month! That puts the Life Ball and all its glorious glitter into perspective. It is an aspect Keszler cautions the party revellers never to forget. 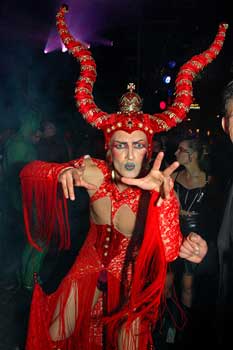 The proceeds of the Ball mostly go to partner organisations. Keszler is meticulous when it comes to the transparency of the association and the distribution of its funds. When rumours emerged in the German and Austrian press some years ago that funds were not always accounted for, he was furious and understandably hurt. But he was easily able to counter all claims publicly and even presented the underground ticket he had used to travel to the first Life Ball all those years ago. Such professionalism does not remain unrewarded. Partners of the association and the Life Ball are such international power players as amfAR (The American Foundation for AIDS Research), the William J. Clinton Foundation/Clinton Health Access Initiative, the MTV–Staying Alive Foundation and UNAIDS – the joint United Nations programme on HIV/AIDS. 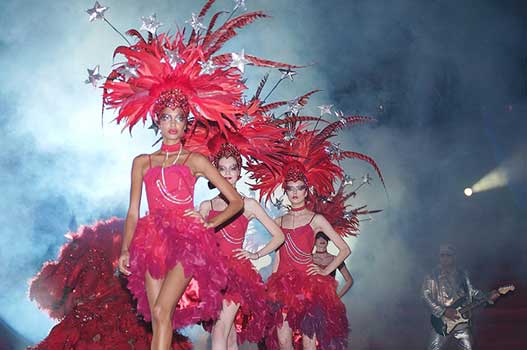 Personalities that have given their support to Keszler and the Life Ball have been illustrious heavyweights such as Bill Clinton who travels to Vienna regularly to attend the Life Ball Gala Dinner and receive a cheque for his foundation. Both Sharon Stone and Eva Longoria have hosted the Opening Ceremony of the Life Ball, making appeals for donations and compassion on the giant red-ribbon-formed stage outside the City Hall where the extravagant show takes place. Others that have graced the Ball with their presence have been Sir Elton John, Janet Jackson, Kylie Minogue, Katie Perry, Anastacia, Naomi Campbell, Liza Minelli, Linda Evangelista, Antonio Banderas and many more.

Gery Keszler himself still supervises the organisation down to the smallest detail and he is the “god” of to the so-called “style bible”, created some years ago to serve as a guide for the often outrageous costumes and to prevent them being gratuitously shocking. Some of the early guests regret this development and criticise Keszler for having become too mainstream. But Keszler is convinced he needs to unite and touch as many people as possible for his cause. He draws inspiration from his love for music, especially opera, and quite obviously enjoys the process as well as the opulence of the imaginary world he creates each year for the Life Ball. 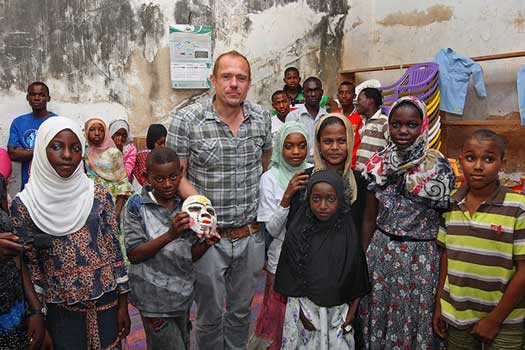 Disguise remains at the heart of the Life Ball and sets it apart from other events of a similar magnitude. Those who follow the guidance of the “style-bible” – and many spend weeks creating their elaborate costumes – gain a reduced price entrance ticket and win the privilege of entering the ball on the red carpet, under the flashing lights of the cameras. Keszler understood from the beginning that the costumes served to reveal the true self behind the mask and to make all guests equal. 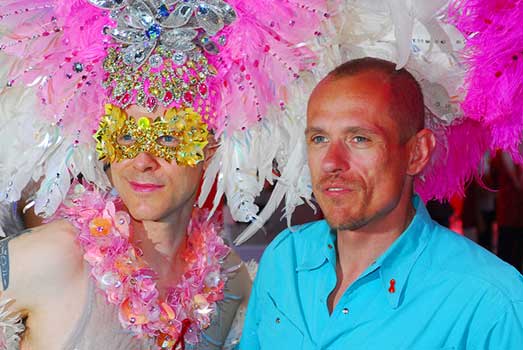 Has his goal been achieved? The way ahead is still long. But undoubtedly this surprisingly vulnerable man, prone to bursts of temper worthy of a diva, whilst just as often moved to tears, has truly made a difference thanks to his clear vision, his conviction and his sheer determination. He has contributed substantially to a fundamental change in our attitude towards the disease – no small feat for an individual! It seems inconceivable that he could ever retire – apart from the tiny dog he carries around lovingly in his arm and named Mr. Brodmann (apparently in memory of a particularly homophobic flying-coach he had to work with for a TV show) his baby is and remains the Life Ball. He has received numerous awards and his achievements have been duly applauded in both Austria and beyond its borders. 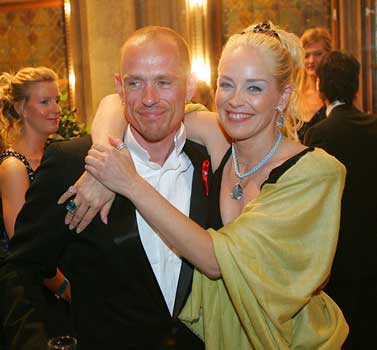 But a sad aura surrounds Keszler, who dedicates his life to his cause and expects as much from others. He has seen too many of his close friends and collaborators die of the disease throughout the years. The Life Ball pays tribute to them each year by “celebrating life.” And Gery Keszler takes advantage of his little time away from the Ball during summer to celebrate his own life in the country – quietly planting potatoes and cooking fruit-jam!
For further information go to www.lifeball.org