The Award-winning film which won the Berlin Silver Bear for Best Script this year and the EIFF Student Jury Prize, Stations of the Cross begins and ends in meditative silence. The director, Dietrich Brüggemann, takes the spectators on a dark journey through the Christian ritual of the fourteen Stations of the Cross, a meditative practice traditionally performed in Catholic churches during Lent in preparation for the Holy Triduum; i.e. the three days leading to Easter Sunday. In other words, the film recreates a religious ritual, inviting a sitting meditation on the suffering of Jesus Christ, known as the Passion. 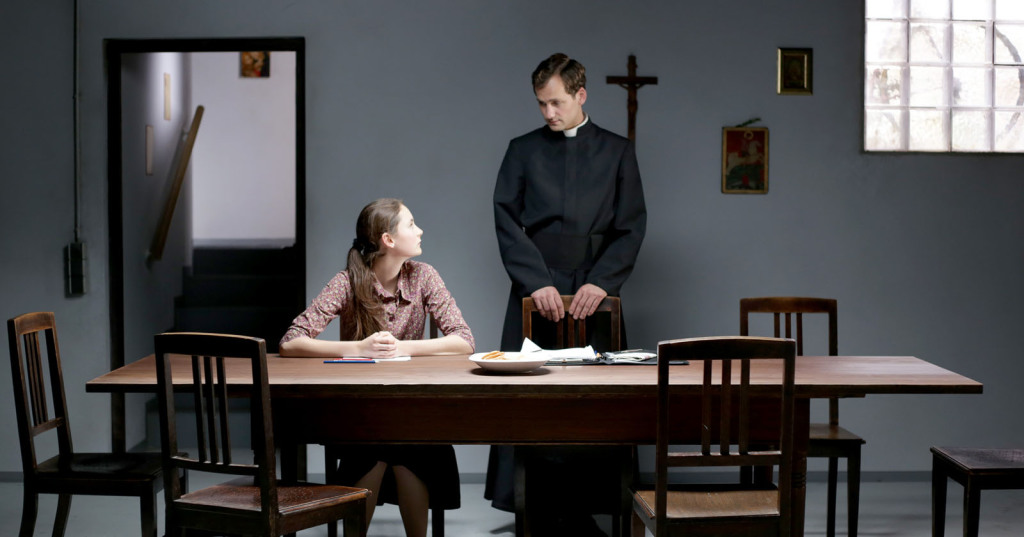 In this poetical film, it is Maria [Lea van Acken], a young girl, who takes the place of Christ, while the people around her take the place of the other characters in the Passion narrative. Crucially, in the film the teachings and administration of the sacraments by a male clergy, which, doctrinally, are supposed to bring people closer to salvation, do instead lead to a worsening of Maria’s health, and eventually to her physical death – although her own physical death is what Maria believes she desires.

This film is layered with symbolism; for instance, the stations are brief stops on a journey towards death; the protagonist is named Maria, like the mother of Christ; the family’s French au pair is named Bernadette [Lucie Aron], in clear reference to the Marian apparition in Lourdes. The film is also gender-biased towards women, and passes comfortably the Bechdel test. In fact it can be said the film pivots around a trinity of women: Maria, Maria’s mother (whose name is never revealed), and Bernadette.

Beautifully acted throughout, especially by the young protagonist, Lea van Acken, and by her mother, Franziska Weisz, whose sorrowful tears at the death of her child are reminiscent of the despair of the Madonna in medieval lyrics. In the late Middle ages, a theological focus on the humanity of Christ brought many people to contemplate the suffering of Christ on the cross and of his mother Mary. Many people, and often women, sought to identify with Christ in the practice of Imitatio Christi. Like the Maria in this film, some medieval female saints inflicted bodily suffering on themselves and abstained from food in a desire to participate with Christ’s work of salvation. Contemporary historians and theologians, such as Caroline Walker Bynum and Amy Hollywood, have challenged uncritical readings of some of these stories.

This film stems from Catholic practices that the film appears to challenge but also to maintain, while reflecting upon their possibilities. Be not mistaken, however, the kind of Catholic teachings purported in the film are still alive, but far from mainstream today. This is despite some attempts to challenge the reforms of Vatican II, especially during the last German papacy (the Bavarian pope, Benedict XVI, who resigned in 2013).

This may be significant for a German film where, in the opening scene – or rather the first station of the cross where Christ [or rather, Maria] is condemned to death – we have a parody of a young Roman Catholic priest teaching teenagers that the Second Vatican Council and certain types of music are the works of the devil.

Each of the stations in this film is crafted slowly and intensely, inviting the viewer to step inside; at the end, the spectator is left to meditate in solitude on the emptiness of Maria’s grave. In the Christian Gospels the empty grave of Christ is a sign of the resurrection; but the spectator of this film is left in the dark silence of the closing titles. Similarly to the darkness of death which follows Good Friday, spectators are invited to work out the resurrection for themselves. Each of the stations sits in quite stillness; the almost complete stillness of the background brings the script and the acting powerfully into relief. And what power it has; one cannot but be taken into the story, an amazing story of love and loss.