Dante met many angels on his travels through Hell, Purgatory and Paradise. In the company of Virgil, he is welcomed at the entrance to purgatory by a winged angel (l’uccel divino), as are all the souls who will ascend to heaven. 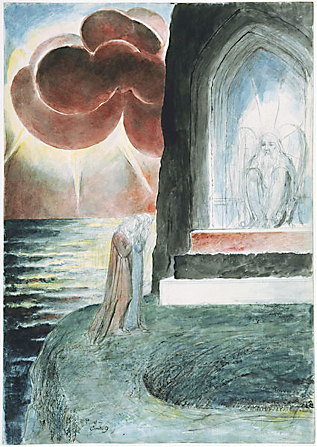 Angels are often imagined as benevolent beings: beautiful messengers or intermediaries between God, the spiritual and the material worlds. Yet, according to theological tradition – as in Dante’s Commedia – angels are not always happy, nor are they always good; suffice it to mention Lucifer, the brightest of all angels, who fell into the deepest corner of hell. From a Christian theological perspective, it may be said that angels are created beings without a body, so logically demons are angels too. Some people believe the souls of little children become angels after death; it is therefore no coincidence that the multitude of little angels populating baroque churches resemble bouncy little children.

While they differ in detail, all three main monotheistic religions, namely, Judaism, Christianity, and Islam, share a belief in angels as created spiritual beings. For instance, in Islam the belief that angels were created from light has a strong tradition, even though it is not mentioned in the Qur’an.

Gabriel is one of the archangels recognised by all three traditions: the Hebrew name for Gabriel is גַּבְרִיאֵל; in Arabic, Gabriel is known as Jibrīl or Jibrā’īl. Famously, it is written in the Gospel of Luke that the angel Gabriel announced the birth of Jesus Christ to the Virgin Mary, an unmarried Jewish girl (Luke 1:26-38); but, arguably, the first annunciation to a woman of the imminent birth of a son is found in the book of Genesis. The first book of the Bible, accepted by both Christians and Jews, describes how an angel appeared to Hagar after she had fled to the desert, and announced to her the imminent birth of her son Ishmael (Genesis 16). In Islam, it is said that the archangel Gabriel (Jibrīl) appeared to Hagar (Hājar) when she was seeking water in the desert for her infant son Ishmael (Ismā’īl).

There are numerous instances of angelic interventions in sacred texts, but here we are mainly concerned with visual works of art. In these few weeks preceding Christmas, which in the northern hemisphere is a season of wintry darkness set against the brightness of sparkling Christmas lights, Dantemag is recalling examples of angels in art, in honour of those who have helped to make the invisible visible.

Starting today, we will open small windows into the visible world of angels as a kind of Advent calendar. We open the scene with a fifteenth-century Italian masterpiece by Piero della Francesca, entitled Madonna del Parto, (Madonna in Pregnancy), a fresco to be found in Monterchi, a small town near Arezzo in Tuscany. 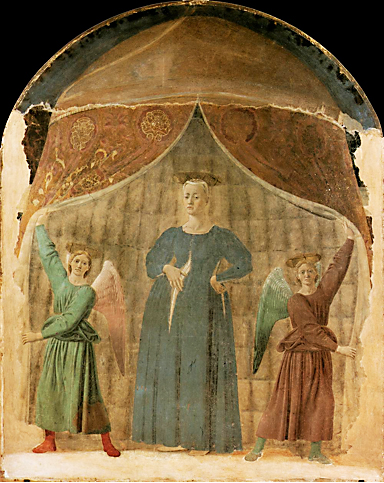 Two angels, mirroring each other, open the curtains onto the season of Advent and introduce its protagonist. A few weeks before Christmas, the angels reveal centre-stage a visibly pregnant Virgin Mary. Paintings of Our Lady depicting her so clearly with child are quite rare; this is partly because they were regarded as doctrinally unsound after the Council of Trent (1545-63). This beautiful fresco is one of only a handful of similar portraits in existence today.

0 POST COMMENT
NEXT ARTICLE
Harmony Of The Opposites. A ‘Compostella’ Pilgrimage
December 5, 2014 - 6:18 am
PREVIOUS ARTICLE
Read Dantemag Review of The Award-winning film STATIONS OF THE CROSS
November 26, 2014 - 9:03 pm