Halfway along our life’s path. Lost in a dark wood.
Unable to find the right way…

Lanital was the Italian fibre made from casein, used during World War II in Italy as a substitute for wool. After the Second World War the fabric was abandoned because its quality was patently inferior to wool and because new synthetic materials came onto the market. A young fashion designer and biologist, Anke Domaske, based in Hanover, has succeeded with her brand “Qmilch” where other companies have failed to do so, creating a milk fibre for textile use that is water-resistant and tear-proof. nQmilch makes sure it uses only milk left over from other production processes and no longer fit for human consumption. If you consider that, just in Germany alone, about 2 million tons of milk are thrown away each year, it is a perfect way to turn a waste into a resource. When you think that to produce 1 kg of Qmilch you need less than 2 litres of water as against more than 10,000 litres to produce the same quantity of cotton, it is easy to calculate the benefits for the environment, let alone for the fashion industry, which has “always” been so concerned about our planet’s sustainability. n 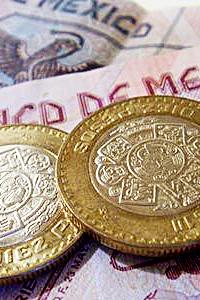 It is cheaper to manufacture goods in Mexico than in any Asian country. So it would seem from the growing trend for companies to flock there, helping to drastically reduce the country’s level of unemployment to as low as 5 %, so much so Mexico is now the second biggest economy in Latin America. Just consider the fact that less than 10 years ago there were at least 8-900,000 Mexicans who illegally tried to get into the USA but that only last year 300,000 returned precisely because the work situation had improved so dramatically. According to a Brooking Institute report in 2010, more than 100,000 jobs have been created by car manufacturers. General Motors, Ford, Chrysler, Honda, Mazda, Nissan, Audi and Volkswagen have all announced expansion plans for the coming years with investments totalling more than US$10 billion. More than 1,400 Italian companies including Ferrero have also been positioning themselves in the country - all of which means you can definitely say the trend is significant. Arriba, arriba Mexico!

It is cheaper to manufacture goods in Mexico than in any Asian country. So it would seem from the growing trend for companies to flock there, helping to drastically reduce the country’s level of unemployment to as low as 5 %, so much so Mexico is now the second biggest economy in Latin America. Just consider the fact that less than 10 years ago there were at least 8-900,000 Mexicans who illegally tried to get into the USA but that only last year 300,000 returned precisely because the work situation had improved so dramatically. According to a Brooking Institute report in 2010, more than 100,000 jobs have been created by car manufacturers. General Motors, Ford, Chrysler, Honda, Mazda, Nissan, Audi and Volkswagen have all announced expansion plans for the coming years with investments totalling more than US$10 billion. More than 1,400 Italian companies including Ferrero have also been positioning themselves in the country - all of which means you can definitely say the trend is significant. Arriba, arriba Mexico!nn
Dear Beatrice I wonder if he gets an invitation to any of the world’s royal celebrations, even if he doesn’t have a palace of his own?

Virgil what can be said of... 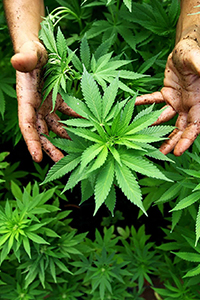 Just a few months after legalising the use of cannabis in Colorado, business is booming. Statistics say that in 2013, more than 40,000 people moved to the state, that is, 8,000 more than the year before. To start with, it was merely the curious and regular users who started the trend but now there is proof it has created a tangible economic effect. Agencies, shops and new companies specialising in “green” catering are selling herbal teas and plenty of beauty products and it looks likely smoking clubs will be opening up soon. However, out of the 27 states that have progressive laws on cannabis in the USA, 21 have a higher percentage of smokers compared to the national average, whereas, of the 24 states that do not have progressive laws, 21 have few regular users – which either casts doubt on how these figures have been arrived at or just that the new laws come in handy if you like smoking pot! But, the question remains - is it still dangerous?n
“Killing a cow or a buffalo to make burgers is fine if that is part of your eating habits but if your diet involves using dolphin meat, then that’s wrong. At least that’s what Caroline Kennedy, the newly-appointed ambassador to Japan, seems to think after she tweeted that she was deeply concerned about the practice of killing dolphins that Japan indulges in and that USA government officially disapproves of. The governor of Wakayama, where the 250 dolphins had been caught, Yoshinobu Nisaka, declared that the respect for other cultures extends also to that culture’s different traditions too. There is no international treaty forbidding the hunting of dolphins and the mammal is not on any list of endangered species, he continued. nSo maybe the daughter of President Kennedy should be posted to India instead and then learn about how cows are treated there? n n 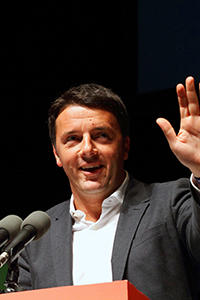 “The Italians have their third unelected PM  in place. Yes, you heard me.  In a so-called parliamentary “democracy” you don’t need to go to the polls and win a mandate, but  it is sufficient  to be the secretary of one of the main parties in order to become Prime Minister.  But what difference is there from the previous one as the main party  in charge is the same one? Well, to start with, the name has changed. We now have Sig. Renzi at the helm. Then his age – he is the youngest ever PM in Italian history; plus there are fewer ministers and the fact that both sexes are represented equally in government. Apart from that, the coalition is still very much the same, and despite the fact the former mayor of Florence has a broader appeal than the previous one, not much else really.  In fact he is having the same problem with his own coalition, like his predecessor, no matter how fast he would like to move on with his promised reforms.  Italians in the street are aware the problems facing their country are caused by the same talentless bunch of decision-makers, who create smoke screens, by changing PM every 10 months or so, which calms the masses down  from time to time - but  how long can this bizarre behaviour  go on  for?  We keep wishing  all the best to the ambitious mayor of Florence - now the ‘mayor of Italy’, as he now styles himself - and we want to celebrate his  “achievements” by dedicating to him a sonnet written by another famous Florentine, Lorenzo de Medici, in the sincere hope the young prime minister, especially considering the six month European presidency starting in June, can really bring a new renaissance to Italy and maybe to the the rest  of Europe - “The time of youth indeed is sweet. But too soon it slips away. If you’d be happy -don’t delay! Tomorrow’s ills you’ve yet to meet”

Karoshi in Japanese means ‘death from overwork’. Last year the toll was nine thousand dead. The difficult economic situation in Japan provides easy excuses for companies to lay off people and force employees to work twice as much. A standard contract in Japan can reach up to 60 hours per week and there is no cap on overtime once the worker has agreed to do it and if you refuse, dismissal can ensue without prior notice. Recently the supreme court rejected an application by a union to publish the names of companies where this practice occurs on the basis any disclosure would damage the company’s reputation. The problem has up till now remained hidden, and it has only recently been revealed, thanks to the battle waged by victims’ families, who, together with the unions, have exposed the goings-on and even if few companies have been called to account by proving they do not indulge in these practices, much more still needs to be done.n 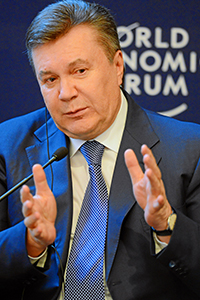 Officially he only earned €75,000 a year but the bills found in the lake on the estate of deposed Ukraine president Yanukovych tell of €30 million for buying candelabras, €2 million to rebuild a tea salon, €1,000 for the vet to treat his fish and €7,000 to create name-plates for his animals in his private zoo. A receipt for a payment in cash of €8.7 million and many more have been posted by Ukraine activists on their website www.yanukovychleaks.org, in case you need to see more. As to the political situation in the former Soviet state which is developing from hour to hour, after the referendum in Crimea, it still seems pretty clear Russia has no intention of letting go of the country that easily - no matter what can be learned from history. Let’s not forget it is the birthplace of the Bolshevik revolution.nYes, but that was against the Tsar not the Oli-tsarch. What? Different name but with a familiar ring to it? Oh now we have imposed sanctions and we know how effective they can be, right?n
They died one after another riding the image they had always portrayed of the invincible Lone Ranger, smoking a cigarette as he surveyed the desert. What a myth! And what irony that the last three Marlboro men have died of the same disease, like the countless others they had sold the dream to! nEric Lawson died last month at the age of 73 from lung cancer; before him Wayne McLaren and David Mclean truthfully lived out the same role. nPhilip Morris in 1992 spent almost US$8 billion to persuade Americans to smoke and it is not worth trying to assess the damage it caused to human health and the miseries it produced. It might take time but unfortunately there’s only so far you can go with an iconic image, especially when the men behind it end up like a coal miner wheezing from inhaling too much coal-dust.n
To what other terraces of doom and pain, dear Virgil, will you accompany me… next time...