Nonno Panda and the Dolphin

The Magic of Touch

A visit to the Tunisian Sahara may feel a bit familiar. You may not have been there in person, but it has entered the mass consciousness through the light and magic of Hollywood. Still, don’t think you know the place. The landscape is only the beginning. There is plenty there to amaze, thrill, charm, and surprise you.

When you’re being charged by seven Berber warriors brandishing rifles, there comes a moment when you think: “Maybe my holiday to the Sahara was a mistake.” When they subsequently launch into a pirouetting dance routine worthy of a Busby Berkeley musical, the sense of relief is immense. I was treated to this surreal sight during the opening ceremony of the International Festival of the Saharan Ksour, one of several cultural powwows that brighten up the Tunisian desert during the balmy winter and spring months. The festival takes place in and around Tataouine, a town immortalised by George Lucas in the original Star Wars trilogy, and the journey there has more than a touch of interplanetary travel about it.

I had woken up well before dawn for an early morning flight from Tunis to Djerba on a delightful rattling twin prop jet named Hannibal. I had quickly dozed off during the following drive to Tataouine only to wake up with the strange feeling that I was trundling over the Gale Crater on board the Curiosity rover. A flat, apricot-coloured plain strewn with dark rocks stretched as far as the eye could see before disappearing into a distant sandy haze. As we approached Tataouine, the most easterly spur of the Atlas mountain range came into view, the weathered volcanic peaks adding an otherworldly dimension to this alien landscape. All that was missing was a second sun in the sky and a couple of hitchhiking robots on the road and we could well have been driving across Luke Skywalker’s namesake home planet. 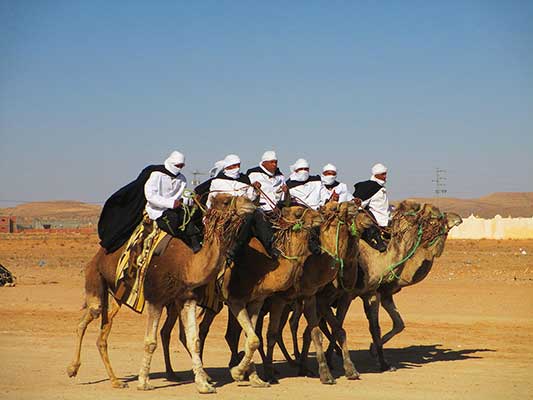 Camel Riders at the Festival 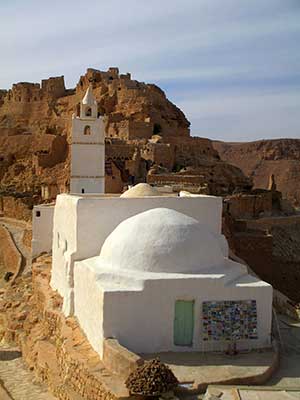 Tataouine is a dusty laid-back town where life looks pretty much the same as when George Lucas filmed here in the mid-1970s. Vintage Peugeot 404 pick-up trucks rattle along the streets while old men sit in pavement cafes sipping glasses of coffee and putting the world to right. The town has an atavistic allure for many Tunisians of Berber descent who travel here to visit the plethora of nearby historic villages perched high upon dramatic mountain outcrops. On the outskirts of town I checked into the Sangho Privilege, one of a cluster of delightful hotels set amidst beautiful desert gardens, studded with date palms. Following an al fresco poolside lunch of exquisite mezes and grilled lamb, I made my way to the opening ceremony of the festival, which took place in a dusty arena on the edge of town.

North African Desert festivals have all the chaotic excitement of American rodeos and are an excuse for musicians and sportsmen from across the Berber world to get together and show off their artistry. Following a few blasts of orchestral crescendos, worthy of a Star Wars battle scene, an elderly Berber man, swathed in white robes and carrying a biblical-looking staff, strode out to recite a poem of welcome and friendship between peoples. The pace then picked up when some Berber horsemen hurtled across the arena sending up clouds of swirling dust devils. Meanwhile, to frenzied drumbeats, a long line of gorgeously attired musicians and dancers appeared, waiting for their turns to perform in front of the crowds. Highlights included an extraordinary dance in which a tower of large amphorae was slowly built up on a dancer’s head as he undulated his hips and danced in a circle to a frenzied drumbeat. When the tower reached eight amphorae it was swaying so much audible gasps of amazement could be heard from the hushed crowd. At times the festival resembled a Berber Eurovision song contest with partisan fans hysterically cheering on their homeboys. If there were a winner, it had to be a team of teenage horsemen who performed a thrilling acrobatic display of horseback handstands and somersaults as they raced around the arena with fearless sparks of pride in their eyes. Meanwhile, as is often the case in rodeos across the Atlantic, many of the animals proved completely stage-struck. A much-anticipated camel fight disintegrated into a bout of uninterested chewing, while a desert fox hunt turned into a damp squib as the Yoda-eared fox pelted straight into the crowds, darting between their legs for protection. 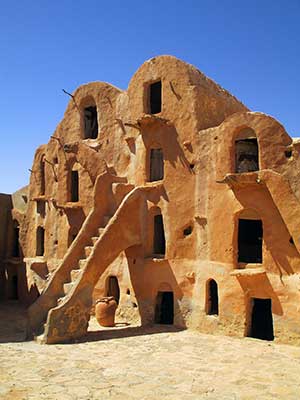 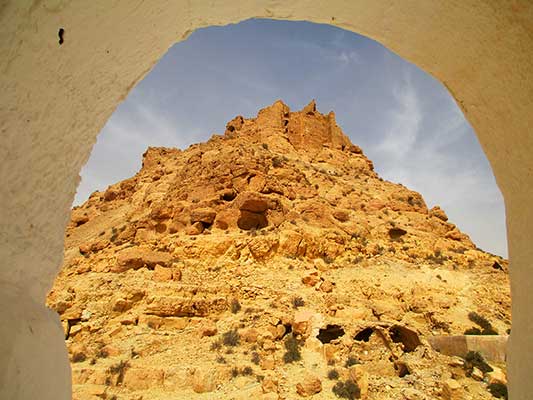 The following morning I left early for a tour of Tataouine’s nearby historic sites. Dotted around the desert are dozens of ancient ksour (Berber granaries), many of which date back to the twelfth century. As storage depots for essential supplies, the ksour were of vital importance to the nomadic Berbers’ survival in the harsh desert environment and were often built on heavily fortified mountaintops. Ksar Ouled is one of the best preserved. Curved storage rooms lie higgledy-piggledy around a peaceful courtyard strewn with terracotta pots. The undulating waves of the rooftops look strangely alien and George Lucas used them to excellent effect as stage sets for his Star Wars films. In the afternoon I made my way to the ancient Berber village of Chenini where the Ksour festival was in full swing. The atmosphere was somewhat marred by a young DJ who had set up speakers that were blasting out gangsta rap with unspeakable lyrics. A camel tethered nearby was so terrified at the deafening noise it was swaying in distress. Fortunately, the DJ toned down the music to a mellower Rai beat which matched the festival mood far better. Wandering away from the crowds, I made my way up to the ancient ruined village that lies on a steep outcrop above the new village. Here, a few souvenir stalls and cafes cluster around a magnificent whitewashed medieval mosque. I paused to look at a pile of desert roses. These extraordinary rocks of crystallised gypsum are a popular souvenir in Tunisia and the most perfect examples do indeed resemble softly sparkling rose blooms. 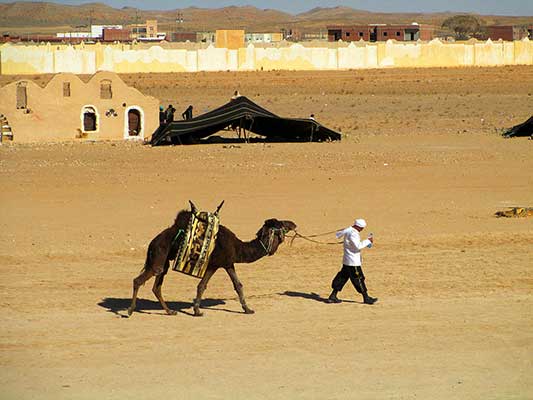 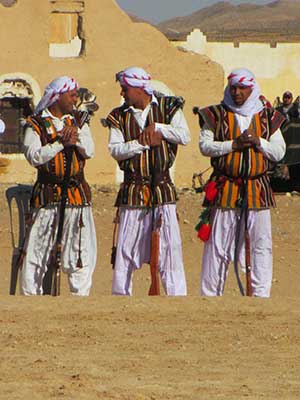 On the drive ba 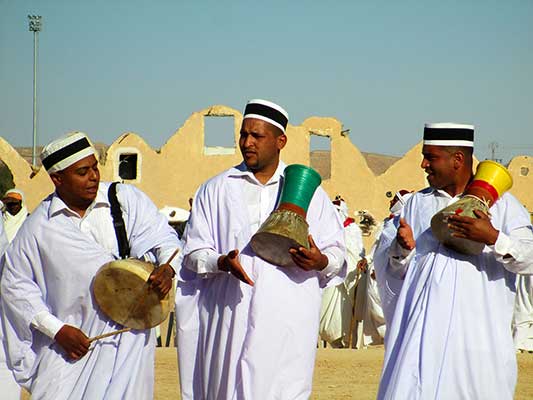 ck to the hotel, my guide jumped out of the car at a simple looking patisserie called El Chams and came out clutching a bag of Tataouine’s most famous delicacy, the temptingly named cornes de gazelles, gazelle horns in English. From the day I had arrived in Tunisia I had been blown away by the delicious food. Year round sunshine infuses fruits and vegetables with bursting flavour while the traditionally reared meats have a taste that is a long-lost memory to western consumers, accustomed to the insipid offerings found on supermarket shelves. All are served up delicately spiced to perfection, and for an afternoon treat a corne de gazelle is hard to beat. The deep fried sausages of pastry crammed with almonds, sesame seeds and hint of aniseed have visitors queueing all day long at this unassuming-looking patisserie; it is very doubtful if the crisp white boxes of pastries intended as presents ever make it home unopened. 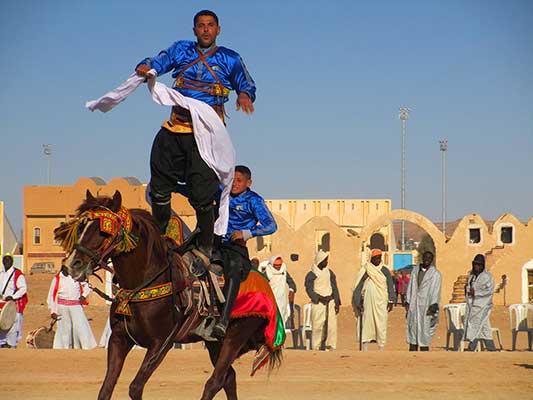 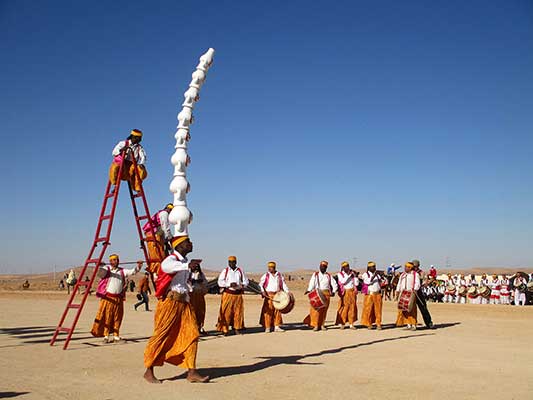 On the final day of the festival I headed to a farewell evening concert at Tataouine’s football stadium. As I arrived the last vestiges of a mini-sandstorm were still blowing and clouds of dust were dancing in the stadium’s floodlights. The headline act was Walid Tellawi, a popular Libyan Rai singer, whose belting voice and infectious melodies soon had all the lads in the stands dancing ecstatically. I was sitting with my guide, a softly spoken elderly Tunisian man, who laughingly told me that dancing was just for youngsters and women. I had been longing to join the lads but with a pang realised that I was well on the wrong side of forty and would have made a complete idiot of myself. However, as the infectiously catchy melodies continued I quickly cheered up. My dancing days in Tunisia might well be over but there was always the prospect of whiling away my days in sunny cafes and eating cornes des gazelles – not a bad way to get old in this sweet and hospitable country.