Music of Quality and Distinction

Water For All: The Nile Basin Conundrum

“This instrument can teach, it can illuminate; yes, and it can even inspire. But it can do so only to the extent that humans are determined to use it to those ends. Otherwise it is merely wires and lights in a box. There is a great and perhaps decisive battle to be fought against ignorance, intolerance and indifference. This weapon of television could be useful.”

I am not sure whether to regard screenwriter and playwright Aaron Sorkin as an intellectual hero giving voice to the embattled, free-thinking America I still believe in (or at least hope and pray will ultimately prevail), or as my fantasy pusher keeping me a junkie mainlining a fairy-tale, progressive vision of the United States that does not remotely correspond to reality.

During four of the eight unbearable years of George W. Bush’s presidency – surely the worst, most damaging and corrupt administration in American history – Sorkin gave us the palliative miracle of The West Wing, a television series which ably fleshed out the fictional, noble White House so many wished we had, instead of the unholy troika of Bush, Cheney and Rumsfeld and their neo-con minions leading us to hell from Wall Street to Iraq. 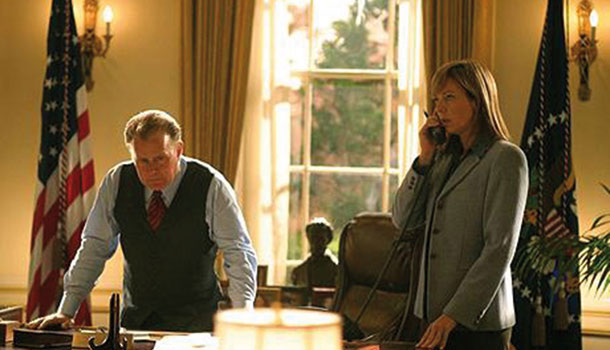 Martin Sheen’s superb faux President Jebediah Bartlett, an articulate, scholarly, upright and deeply moral composite of Clinton, Jefferson, Lincoln, JFK, John Quincy Adams, Carter, Wilson, Truman, Eisenhower and FDR all at once, was a Commander in Chief we could be proud of. But after each hour of The West Wing had elapsed on the small screen, we were stuck with that mangler of the English language, that I-get-my-orders-direct-from-God, that how-tight-is my-flight-suit, pseudo-cowboy Dubya, as colossal a non-commanding presence and non-intellect as ever diminished the US Presidency. The West Wing at least made it bearable. Sort of.

Timothy Geithner and Larry Summers in the West Wing Hall

Now we’re at a juncture in history when US broadcast news is a thin caricature of itself, dominated by “hair and teeth” anchors and reporters chosen for their perfect coiffure and pearly whites rather than their journalistic acumen; when Fox News (or is that the blonde Stepford Wife Network?) is ACTUALLY the dominant television network in America, a toxic cauldron of disinformation, racism, sexism, jingoism, xenophobia and so many other pathological phobias and outright lies that is anything but “fair and balanced”, a creation that Joseph Goebbels would applaud. At this moment, in the absence of an alternative in any news division in mainstream US broadcasting to counter the dumbing down and jack booting of US network news, Sorkin has brought us The Newsroom.

Scene from the West Wing

It is a wonderful fantasy. In a clear homage to Ed Murrow, Walter Cronkite, John Chancellor, Harry Reasoner, Eric Sevareid and all the other grey eminences of the American news airwaves from a time when US news broadcasting was something to be proud of, Jeff Daniels portrays anchorman Will McAvoy, a firebrand apostle of the truth, a free thinker unafraid to speak truth to power. Emily Mortimer plays his ace executive producer MacKenzie McHale, equally a crusader for muscular, fact-based, meticulously gathered and impeccably sourced reportage, who, like all her young acolytes and the stalwart anchorman, are driven to report news that matters, not puerile voyeurism or mindless feel-good human interest stories, regardless of how the ratings or the corporate sponsors respond. Moreover, McAvoy is unflinching in challenging neo-con half truths and making mince meat of Tea Party extremists and the hate schlock jocks so clearly modelled on the Limbaughs, O’Reillys, Hannitys and Glenn Becks, who genuinely pollute our airwaves and who do so much to pervert the national discourse.

Even more strikingly, the mythical Atlantis Cable Network (is that an obvious reference to the lost civilisation of US broadcast news by Sorkin?) has an active foreign desk and foreign correspondents and does a credible job of covering the early days of the Arab Spring in Tahrir Square. Sorkin’s fictional network actually cares about the world beyond our shores. But it is all sadly just a story. International desks have all but ceased to exist at the main US networks except for skeletal bureaus in London, which somehow are meant to cover the rest of the planet. In practice, it’s nothing but film footage from the agencies and the same wire copy from the same agency read by the correspondent in the bureau with a still shot of St Paul’s Cathedral behind him. We don’t even report the Afghan war very much. It’s much easier – and cheaper – to keep it to talking heads in the studio than to send field teams out into the world. The United States may be the world’s last superpower, but 75% of its population gathers its news from television and that makes it one of the least informed populations on earth. 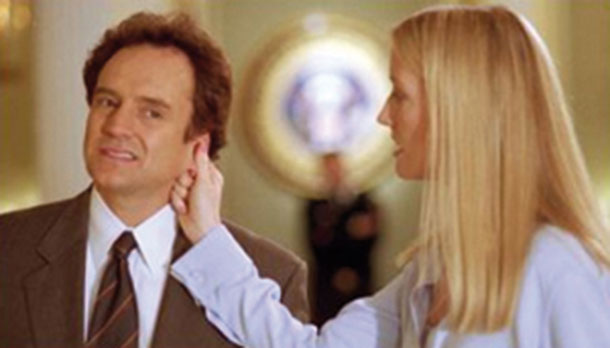 Ed Murrow and the old CBS, side by side with our cousins at the BBC, virtually invented the art and discipline of broadcast news during the early, dangerous days of the Second World War. Murrow, standing bravely on top of the BBC’s Broadcasting House, brought the Blitz, its horrors, its courage and sacrifice into America’s living rooms, beginning each broadcast – often punctuated by the sound of bombs and anti-aircraft batteries – with his immortal signature introduction, “This is London calling… .” Later, during the McCarthy anti-communist witch hunts, Murrow did more than any other single American to bring down Tail Gunner Joe’s bid to turn the United States into a police state. Murrow is nothing less than an American hero, a knight of free speech, free thinking, and the right to dissent. And no matter how skillfully Sorkin’s pen draws up the newsroom of our dreams, there is no longer any Murrow in our midst, nor a tradition like his to defend. Across the water, our British cousins did not surrender on the medium of broadcast news. The BBC and CH4/ITN still thrive and together with broadcast news in Canada, Australia, South Africa and of course Al Jazeera English – the most dynamic, contemporary news, English-speaking television on earth (which is virtually impossible to watch in the US except online, and kept deliberately so) – other corners of the Anglophone planet still uphold excellence in broadcast news.

But not in America . . . except in a broadcast newsroom that only exists as a work of fictional entertainment. Would Murrow relish the irony? One doubts it.