One day, wandering along life’s path, I got lost in a dark jungle, unable to find the right way…

“I must be getting old,” I said to myself, because I have always been able to find my way around. I kept walking, heading for a field, when I heard somebody sobbing.

I could not stand the idea of somebody being sad, so I tried to find who was making that disturbing noise. It turned out to be a beautiful little girl who was piling up kindling wood.

“Why is a beautiful girl like you sobbing?” I asked with a smile.

She turned around and gave me a look so full of hatred, I will never forget it. She dried her tears and went on with her job, totally ignoring me. Her reaction puzzled me, I must admit. But kids are like our cubs. They feel exposed and vulnerable when they are going through a bad time, so I decided to let it go and let her get used to me being there. I sat down not too far from her, pretending to play with some flowers and looking at the view. 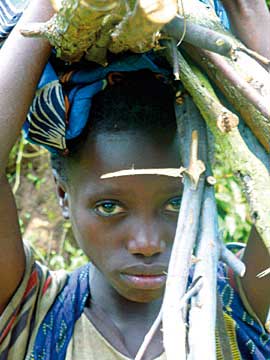 She kept on with her work as if I wasn’t there, now and again shooting a glance at me. And if looks could kill, well, a beast like me would have been long gone.

There was definitely something wrong there and I was determined to find out what it was, so I let her simmer a bit and then decided to be more proactive. I picked up a few sticks I found lying close by and took them over to her. She did not take them from me, but just gestured to me to put them on the pile she was making. Without saying anything, I left her to look for some more.

While I was trying to get one big stick out of a bush I pulled too hard and, I lost my balance, went belly-up and rolled down the hill. When I finally came to a rest, I realised the girl was laughing at me.

I guess I must have looked quite ridiculous tumbling down, but that broke the ice. She kindly came over to me and tried to help me stand up again. Of course I let her do it, making a bit of a scene about how I was (although I knew I was perfectly fine). And so I was able to make a connection and we started talking.

I thanked her and introduced myself. She did the same, her name was Mbuti.

“So, Mbuti, what does a beautiful girl like you have to cry about?”

“Ah, Nonno Panda, I’m sorry if I overreacted. But I feel so angry with all of you animals right now, you have no idea!” admitted the girl, blushing a bit.

“Well, I have lots of time and I’m a good listener, so let’s sit under that tree and you can tell me.” And so we did. Once we got comfortable, she began by telling me that many years ago, before she was even born, a white woman came to the jungle to study the life of the gorillas in the mountains in an area not far from where she lives. This woman was appalled by the fact the gorillas were poached for their skins, hands and heads. She started a campaign to rescue them, as they would soon be extinct if the poachers carried on with their slaughter. She attracted a lot of attention to their cause and rightly so, because the gorilla is a beautiful and peaceful animal.

“But for some barbaric reason, the white man took a fancy to their skin and head and paws. Apparently, having them on display made them feel special,” she said, with disgust in her voice.

Personally, I cannot think of anything more grotesque than having a gorilla head as a trophy in your house, or a gorilla paw used as an ash tray on your table. If nothing else, considering how closely related they are to humans (as they share 98% of their DNA), it is like having a head or a hand of your cousins on the table. But human beings are strange creatures – we animals always knew that.

Anyway, initially the local government dismissed the brave woman’s claims, saying the gorillas were the only source of income for the local population. So she carried on her own against the poachers but when she paid for it with her life, the mountain gorilla’s cause attracted worldwide attention and, as a result, the species was saved from extinction.

“So that was an extraordinary thing, wasn’t it?” I asked, thinking that humans are not all alike. The little girl did not deny that. “But what happened in my area,” said Mbuti, who was quite knowledgeable in this matter, “is that some businessmen saw the pilgrimages white people started making to observe the mountain gorilla as an opportunity to make money. So they created protected areas where the mountain gorillas could live. Tourists can go and see the animals in their environment up close, as close as you and I are sitting. They pay lots of money for it. But to guarantee the gorilla population – and their moneymaking, there can be no hunting in this area. This is when the trouble started for me,” she said.

“For you?” I asked, thinking she was having me on. “Why would you have any problem with a national gorilla park being created?”

“Well, Nonno Panda,” she said, patiently, “I told you it was a long story, didn’t I?” She smiled and went on to give her reasons. It was not directly related to her, personally, but to the group of people she belonged to – a hunter-gatherer group that lived in the jungle. “The white men call us pygmy because of our small size, but we feel that’s defining us in a perjorative way and we prefer to be called by our ethnic group. I’m a Batwa, for example,” she said with immense pride in her origins. That name rings a bell, I thought. Oh yes, I know who told me about it. I found it in one of those poems my friend Virgil introduced me to. The great Homer mentioned something like that, too, in his book about Greek mythology, describing a tribe of small people that lived in some part of India and around the Horn of Africa.

Anyway my recollection of the etymology of the name distracted me from what Mbuti was saying. But when I heard they were moved out of the areas that belonged to them, separated into small groups and dumped in areas close to the cities, I suddenly started.

“What do you mean they moved you out of the forest? I thought you were hunter-gatherers. How are you supposed to live on the edge of cities?”

“Well,” she said sadly, “they gave us some land and forced us to become farmers.”

“That’s ridiculous! I’ve never heard of anything so stupid! As if anybody can become a farmer overnight. It’s like forcing a lion to become a vegetarian.! Looking after the Mother Earth’s soil is an ancient tradition than can’t be taught just like that. Just take one of those people living in the city, who thinks milk comes in a carton and put them into a farm! They’ll die of starvation in no time, even if they’ve got all they need to survive all within easy reach.” What Mbuti told me made me really angry. Honestly, the stupidity of human beings sometimes is beyond comprehension! No wonder she was so sad.

These people took her community out of the jungle and put them into open air concentration camps where, admittedly, they were able to move around freely, yes, but could not get to the jungle where their daily primary source of food is. Then they were expected to wait for a crop to be harvested before they could eat. It was like sentencing them all to a slow death.

She also told me that the land they were given was not prime land, because that was already occupied by the local farmers. Her people were confined to land on hilltops, which was the cheapest going, as the farmers didn’t want it, because it had no water for irrigation nearby, and even if you consider it rains quite often, the water just rushes down hill and cannot be saved without the proper infrastructure.

Mbuti’s face lit up when she told me about her happiness in the jungle. Her people had tremendous respect for nature since it provided them with everything they needed. And I believed her. Why would they kill the source of their livelihood?

They had a symbiotic relationship with nature – free to move to different parts of the jungle depending on their need for food and so they knew every single inch of the forest. Of course the fact they were hunter-gatherers created conflict with the authorities, who were as short-sighted as only human beings can be. They saw Mbuti’s people as a threat to the gorilla – as if sharing the same habitat with a much bigger animal turned them into poachers.

These people had no knowledge of modern weaponry, and they hunted using primeval tools. But under the well-worn pretext of “educating” them, they were removed from the reserved areas and forced to go to school with other kids and suffer the humiliation of being thought of as no better than savages by the local people. But as Mbuti’s parents had no source of income, they could not afford her uniform so she had to drop out and as she was the eldest of a large family she was forced to work back at home to help out.

It was a very depressing story and I could understand now why she resented me so much, as I represented the reason for her unhappiness. But when she told me her people felt all of this misery had befallen them because their ancestors were angry at them for failing to honour their memory, I could not stand it any longer. I had to do something about it; I had to ask my friend the gorillas if they knew anything about all this. I was sure they were not aware of this form of reverse discrimination – animal versus human, created once again by humans. There is no way that an animal can live in peace, knowing that his happiness is creating misery in others.

We know on the Earth there is space and resources for everybody, if we share them and take care of them. Everything is very delicately balanced. But when some people think they are more special than others, it is a perfect recipe for disaster. Such arrogance has always been the main source for conflicts.

So I asked Mbuti to come with me and meet the gorillas to find out what they felt about it.