Which Way the Syrian Revolution? 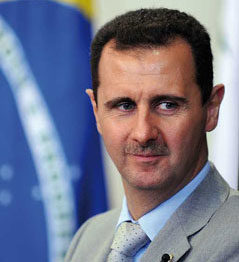 Beginning in Tunisia in late 2010 and spreading across the region in the following months, the extraordinary events of the Arab uprisings unfolded across the region in 2011 as the world watched, breathless. Dictators were either overthrown or acquiesced when their populations finally reared up and roared. While many of those countries have moved through a conflictive stage and on to the work of reorganising their societies, Syria, in particular, remains locked in a destructive and bloody fratricidal struggle with the ruling regime of Bashar al Assad. The outcome of that punishing conflict carries implications not only for the future of Syria, but is key for the entire Middle East. Chris Kline examines the haunting questions surrounding the uprising there.

When ruthless violence is the last and only trump card of a brutal dictatorship, its longevity is limited. The iron fist is soon rendered impotent, if the will to resist it is greater than the horror it imposes. Thus it is not a question of if, but rather of when Bashar al Assad’s murderous regime will fall. The Syrian Army, security forces, and loyalist militias have, to date, killed more than ten thousand of their fellow citizens, and this is a conservative estimate. But quite clearly the death toll has not remotely dampened the call for liberation. On the contrary, each new victim of government repression seems to steel the Syrian resistance even further. “The Upper God” Bashar’s days are surely numbered. Whether he or his patrons in Moscow and Teheran grasp that yet is another matter.

But so many questions abound when we regard Syria’s blood-soaked struggle for freedom. Little seems certain apart from the likelihood of al Assad’s fall, sooner or later. The one constant is the fluidity, and in many regards the opacity, of the situation. What shape will change bring? How will it come about? Who will emerge as the true standard bearers of the Syrian Revolution? What will neighbouring powers with vested interests do after the fall of al Assad’s Alawite led regime? Will the revolution radicalise? Will there be a pogrom of the Alawites by the Sunni majority? Will the conflict spill over? Who speaks for the Syrian uprising?

Many different resistance organisations and would-be governments-in-exile purporting to represent the Syrian people have emerged, making grandiose statements about unity, only to then bicker amongst themselves and inevitably splinter again into new factions. It almost borders on comic opera, were the situation on the ground not so grim.
No central unifying figure or political organisation has come forward to lead the Syrian Revolution in a cohesive way. And yet the uprising has lost none of its momentum. It is impossible to deny the impact of what could be labelled “people power”: the cumulative and ongoing effect of spontaneous, grassroots resistance of every variety to al Assad’s regime, across the spectrum of Syrian society. Rather than one dissident captain leading rebellion, Syria has many.

Increasingly, however, in the context of armed resistance the spotlight is squarely on the Free Syrian Army, mostly still composed of disaffected members of the armed forces and perhaps numbering some 30,000 – though even its numerical strength is difficult to confirm and new volunteers flock to it every day. Even its very title is misleading; the FSA implies a cohesive, unified, disciplined guerrilla army under some sort of central command, sharing a common doctrine and clear strategic mission. But the FSA is not Tito’s Partisans, General Giap’s Viet Minh or Mao’s Red Army. It is not an army in any sense at all. The FSA is an umbrella term for a host of loosely organised, poorly trained, severely under-equipped, uncoordinated guerrilla bands scattered in enclaves in a state of open insurrection across the country where the uprising has become a de facto civil war.

The FSA in Qseir or Idlib is not the same as Homs or Deraa or in the pockets of rebellion springing up in Damascus itself. A common thread is that the FSA is sorely lacking in weaponry and can only muster small arms and insufficient numbers of rocket launchers. In order to make up the shortfall (and having studied the lessons of Iraq and Afghanistan), the FSA has begun to adopt the Improvised Explosive Device or IED. This merely underscores the David-and-Goliath nature of the struggle against the might of a conventional military groaning with Russian firepower. Still, despite the reverses it has suffered, the FSA seems here to stay. That it was able to launch a suicide mission in the heart of Damascus and engage in a brisk firefight literally on the street where two of al Assad’s most senior security chiefs live is a sign of its daring, its growing capabilities and proof that the regime is not inviolate in its inner sanctum. That the FSA has also focused its efforts in attacking “clean” targets by storming headquarters and barracks of the security services, bringing war to the torturers and secret policemen of the regime brings them legitimacy, though emerging stories of summary executions carried out by the FSA detracts from this hope of ethical conduct in insurgent warfare.

As to who might be arming the FSA, speculation abounds that, covertly, the US, France, Israel, Saudi Arabia and Qatar have all had a hand. In the absence of proof, it’s difficult to point the finger. In another sense, though, it hardly matters. As with all insurgencies struggling against poor odds, arms supplies for the FSA are a question of practical necessity. Weapons are gladly accepted from friends, the black market, or the devil, and the provenance of arms during the fight seldom determines the loyalty of those who used them when the shooting stops. We need only consider Vietnam going to war with its Chinese benefactor only a few years after the fall of Saigon or the Taliban biting the US and Pakistani hands that once fed it. Indeed let’s not even forget that Al Qaida, in its most embryonic form, is in a large part a Western construct. The FSA will get its guns somehow and Syrians will do what Syrians want when the revolution is won, not what outside forces dictate or wish.

And who makes up the FSA in its sectarian character? On the whole the FSA is composed of moderate to conservative Sunni Muslims and its ranks so far do not seem to contain members of the sizable, Christian, Kurdish or Palestinian minorities. Among them are returned jihadists from the battlefields of Iraq, other homegrown adherents of the most extreme Salafi and Wahabbi Islamist camps, and a handful of foreign fighters with equally radical ideologies. But on the whole these make up a tiny minority. The bulk of the FSA are ordinary Sunnis, and outside of the armed resistance there are many Syrians championing the birth of a non-sectarian civil democracy, still calling for a peaceful resolution of the conflict, and advocating non-violent dissent.

But if the bloodshed continues on the same scale or worse, in a country where the tradition of vendetta is entrenched in the culture, there are no secure guarantees that the uprising will not radicalise, nor that the wholesale slaughter of the Alawites will not ensue.

And if that occurs, how will kindred Shia in Iran respond? Or for that matter Iraqi Shia? And not least, what will be the reaction of the co-religionist militants of Hezbollah, long under the patronage of both Damascus and Teheran? Up to now, Iran, while having provided logistical and organisational support to help al Assad better mastermind his crackdown, have stopped short of sending troops. But would that remain the case if al Assad’s overthrow seemed imminent? Even Turkey, which has strongly condemned the atrocities of the Syrian regime, is anxious over the fate of the Syrian Alawites, lest it spark unrest amongst its own considerable Alawite minority. The possibility of a larger Shia vs Sunni conflagration across the whole of the Middle East, is just one of the looming spectres of an ever more disintegrated Syria.

And there are yet more complexities. Early signs that the considerable Kurdish minority within Syria could demand greater autonomy in a post-Assad reality, will displease Turkey and Iran equally, as both nations contend with large, restive Kurdish minorities. Turkey has fought a bloody counter insurgency against Kurdish PKK guerrillas within its own borders since 1984. Moreover, the semi-autonomous Kurdish enclave in nearby Northern Iraq has long provoked Turkish ire. A greater measure of Kurdish empowerment, anything that brings the possibility of a true, independent Kurdistan to the fore, could readily trigger Turkish military intervention, even if that is a very remote possibility now. To be sure nobody in the Western alliance, after the fiasco of Iraq, the imminent retreat from Afghanistan and the uncertain result of intervention in Libya, has any stomach for military action in Syria (though of course, this reluctance is no guarantee of Syria remaining solely a Syrian problem).

On the diplomatic front, that al Assad has ostensibly accepted a UN-brokered peace proposal should not – if one can judge by history – be any cause for celebration. It should also be self-evident that a proposal in which al Assad remains in power is unfathomable to those who are uncompromisingly devoted to his downfall and are dying in the process of achieving it. One Middle East expert, speaking anonymously, who has studied the uprising since its outset, including clandestinely within Syria, stated bluntly: “You can’t negotiate with murderers and liars.”

Also speaking on condition of anonymity, another long-time Syria watcher contends: “From Colin Powell to John Kerry, through French diplomats and now to Kofi Annan, there is a legacy of Western diplomats returning from Damascus empty-handed. The Syrian regime has no history of delivering on its promises. The regime instead has a policy of using negotiations as a diversion while it continues to implement the policies it wants.”

So al Assad, playing the humane, paternal, benevolent leader of the Syrian people, visits Homs after his army has flattened it and offers hollow pledges of cosmetic political reform while the slaughter of his own people continues unabated. On the surface, it would seem that the one thing the UN has truly achieved in Syria is an ongoing series of meaningless press conferences. The Syrian debacle goes on. The human cost of Syria’s freedom will stay high with much more killing and suffering to follow. The ultimate downfall of the dictatorship is almost certain. The true face of the aftermath of revolution is uncertain and the pathway to peace is fraught with multiple dangers. Syria’s future is not yet cast in stone, but the story is still being daily written in blood.