Rio is famous world-wide for a sensuality that is brash, joyous, uninhibited, sometimes violent, nearly cliched. But that voluptuousness can also be found in the interstices between moments, in a glance, or a passing touch. The city’scarinho– it’s tenderness – is an essential element of its sensuality. And that’s something that fresh eyes can see, if they look past the obvious.

I’ve just moved to Rio de Janeiro. I’m being served a lazy afternoon lunch. Bossa Nova is playing on the breeze, the rhythms of the street, and the ocean below. Caju – the blushing, easily-bruised fruit of the cashew nut – is brought to the table on a platter of tropical fruits. I am a caju virgin. My host, in his bare feet, tells me to eat it like an apple, hand-to-mouth. The flesh is soft, resistant and – this is barely a metaphor – human. 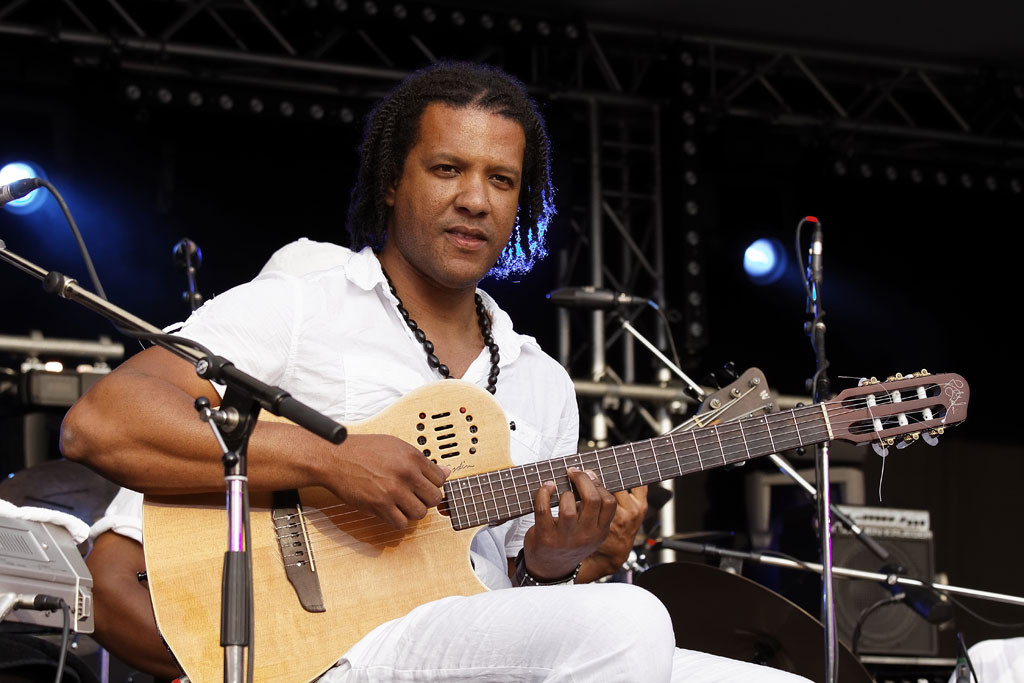 What is not sexy about Rio de Janeiro?

Down nine flights of stairs between two parked cars, a monstrously large woman has pulled off her pants and is squatting to pee. She takes her time. Her voluptuous body fills the hard-boundaried space made by the cars. She tucks her head, and her full ass rises. Her hand moves forward and below between her thighs.  She is adjusting her penis. It takes some effort.

A black sedan pulls up. She still squats in the dark, thighs clenched. One hand holds her penis in place. The other slides her beige panties up her legs. She takes a long look at the automobile that slowly puts itself in gear. After one final adjustment, she emerges, leaving a puddle and its tributary behind. 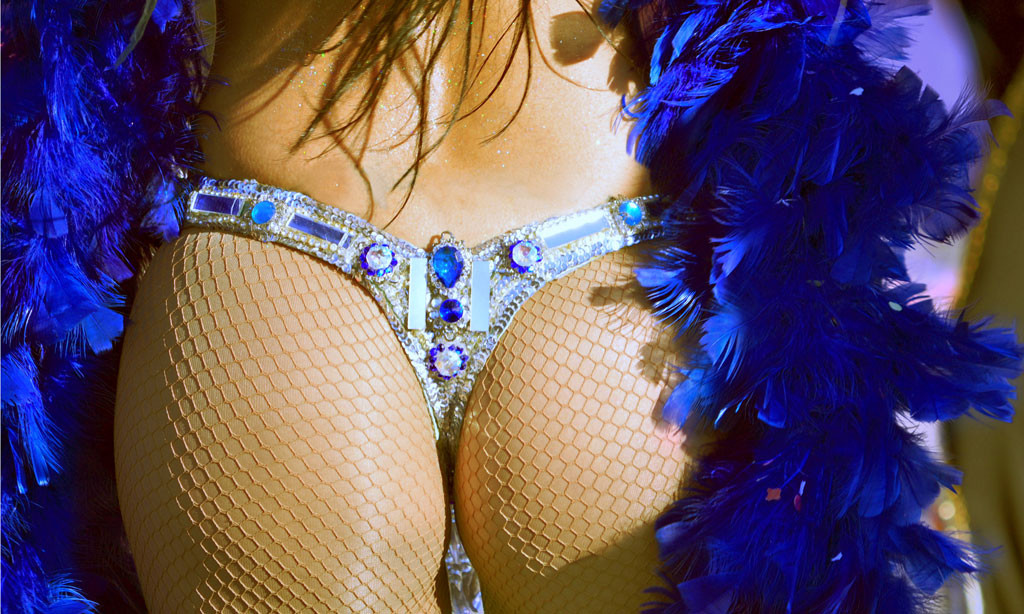 Cars drive past, the ocean roars and whispers, the high laughter of the prostitutes rises. Hers is alive. She calls out: to Yemanja, to passing cars, to potential customers, to other prostitutes, to me at my window – the perfectly-pitched catcall of a practised performer.

It’s there, between half-naked men standing Speedo to Speedo while reading the daily paper, hanging for that purpose, next to the nudie pictures. There, in the smell of tapioca pancakes with sun-dried beef, onions and cheese sold on the street. There, in the vocal resonance of vendors calling:
“Mate Leão.” “Biscoitos Globo.” 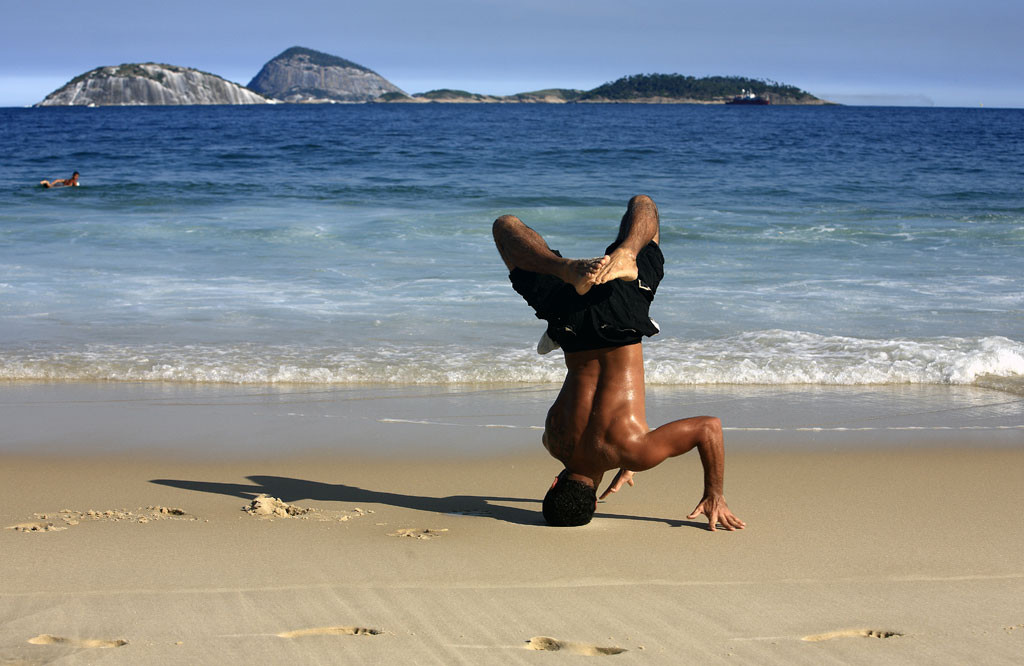 And it’s here, at the market, where the grocer explains, with a hand on my shoulder and another on the greens: “These you can’t cut. Tear them with your hands or they’ll burn your mouth. These you can cut but you must boil them or they’ll be bitter. And these you can cut and eat as they are. You’ll love them.” Or here, in the gestures of the man in a bloodied, white apron, piling plucked fowl exactingly. My mother says, “He cuts chicken like a jeweller.” Or, here, at the corner, where the used-book salesman has a makeshift cart. He loans my 85-year-old neighbour whatever she likes. She reads the books and returns them to him. She once gave him her mother’s green, leather-bound, 24-volume set of famous works of art.

“He would lie down for me to walk on him,” she says.

Anything-goes samba comes suddenly around a corner. Cavaquinho (a four-string ukulele), someone dancing, drumming in a doorway. Beneath a tree, a one-legged man taps out a percussion tune on his metal crutch. He sits on the ground, giving rhythm to the storm he knows will erupt. Six wheelchairs sit under an assembly of trees, on Burle Marx’s famed mosaic sidewalk. Daughters, nurses and maids sit with the mentally ill and the aged. There is sensuality in their care and, even, somewhat perversely, in the power play between caretaker and caregiver.

At the back of each apartment, in the privacy of the bedrooms, or in the maids’ quarters, and the public area between them all, there is a shaft. Here, the chords of a couple practising flute and sax rise together with the cries of the wheelchair confined woman in no 701, and mix with the romantic tones of the 21:30 novela (soap opera).

Walking home, I pass a male body that must be six feet four inches, 200 pounds or more, sculpted as if by an artist. Take-your-breath-away gorgeous, I see out of the corner of my eye. His almond eyes reach out, grab mine, and hold them swaddled for a beat past the smile that forces itself through my lips. I think I may have found Eros. 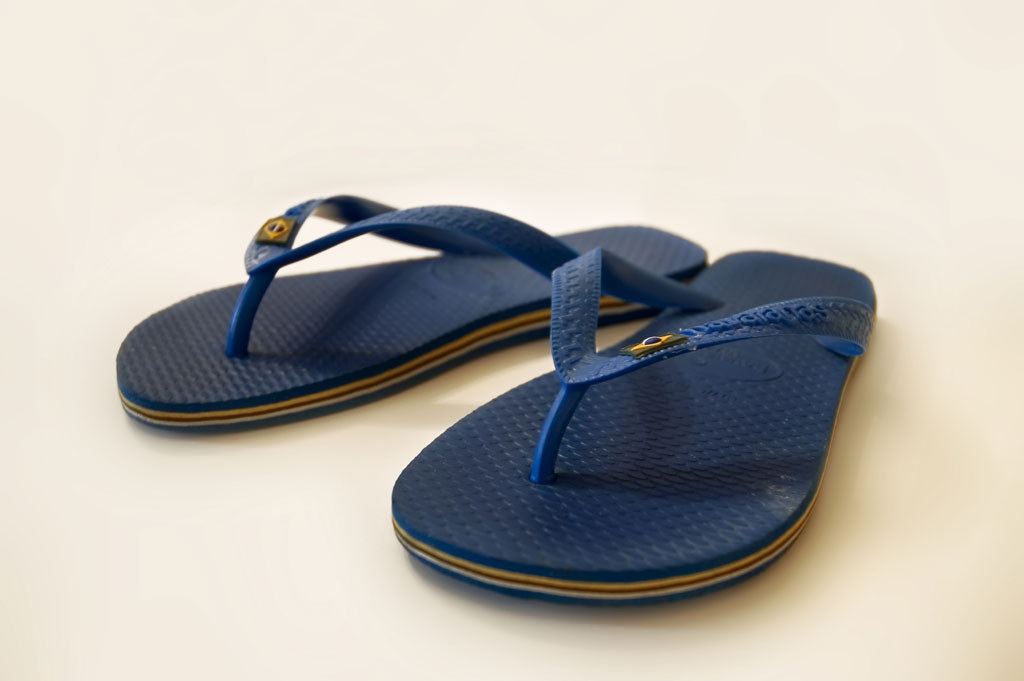 Minutes later, I stumble upon three more, most gorgeous men. This time, I stand still in the middle of the pavement, watching. They talk animatedly with exaggerated gestures. Their pants are worn just too tight. Button-down shirts teased to show washboard stomachs. A handsome bulge of muscle on each arm; sleeves rolled high. They have new haircuts: laborious patterns shaved into the scalp, their appearance carefully orchestrated. Their movements are choreographed. And I am captivated by the dance of ass, abs, and muscle lifting 65 gallons of garbage onto the garbage truck, their orange dungarees becoming sails as they drive off.

I decide to be ready in Rio, I’ll need to get a bikini wax. I lay down in a curtained area on a raised single bed dusted with talcum. A nurse-like beautician, tells me to take off my panties and to spread my legs. I’m offered a menu: Labia, Anus, Anus and Labia, Pubis, Thighs…. She applies hot sugar to my labia, my asshole, my thighs. She brushes talcum and pulls warm wax. I feel waves of pain and then her carinho (tender caresses), as if to show me she didn’t mean to hurt me.

Late afternoon lightning strikes. The city steams up. People walk in pairs, holding hands, or they stare unabashedly – but not unkindly. Everyone leans. Girls lean into their boyfriends on benches, legs entwined. Boys lean into their girlfriends on cars, hands on her hips, lips locked. Old men in toupees lean over their drinks toward the young women they’ve brought to the open-air cafés. Dogs in heat lean. Five floors up,  a woman’s voice rises. She gesticulates. She paces. He leans out the window. Their argument washes over a family of five asleep on the sidewalk. The steam rises off all this publicly-exposed skin. There is sensuality in the simplest gesture, hypocrisy, violence of the city. 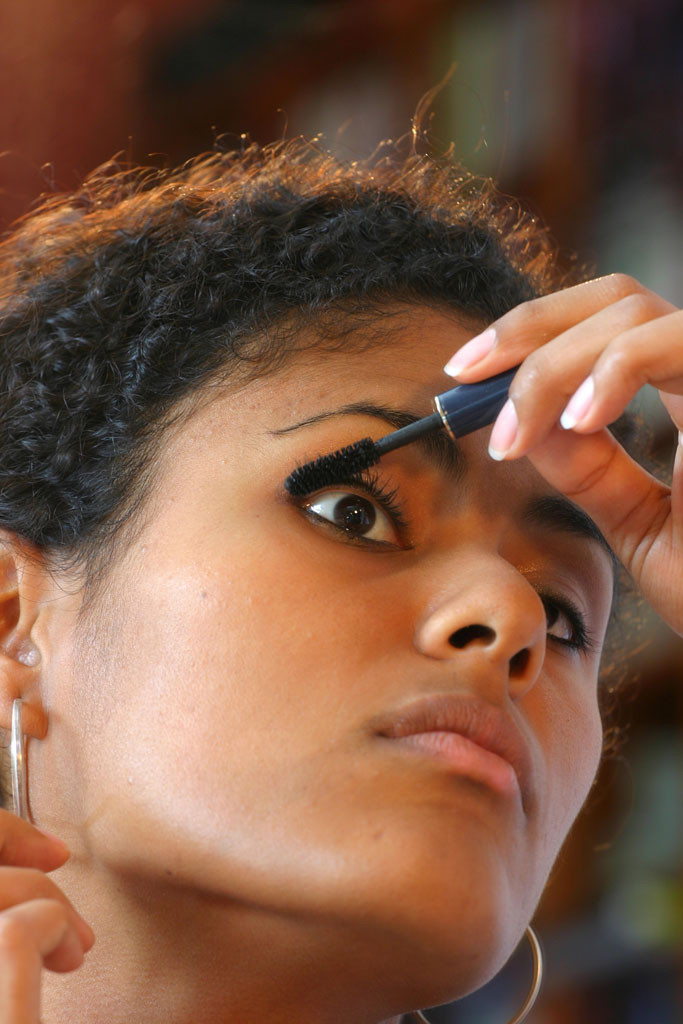 A woman in the waves with her grown retarded son splashes water on his body and laughs. She’s the Piéta pouring cups of seawater over his shoulders and gently through his hair. He stops his ecstatic cooing to plant a big, tender kiss on her cheek. Three adolescent girls, guava breasts exposed beneath barely-veiling sarongs, giggle as they pass a couple, post-retirement, who face the ocean on a concrete Burle Marx bench. He’s shirtless now and so is she, but for a lavender bikini top. They hold hands, as if to say, “Let’s go, my love. The future begins now.”

“Who can see something this beautiful and not give it carinho,” the man says, approaching a dog. This is a world in which a word likecarinhoexists in the quotidian, even between strangers on a street. Another man walks past with his buddy and, in mid-sentence, looking into my eyes, says, “This is the kind of woman I mean, beautiful and educated.” He winks and continues his gripe about his girlfriend.

A woman in high heels, tight jeans and a pink tank-top is next, her hair cascading past her shoulders, dyed a brilliant red. She wears no makeup, save for some bright pink lipstick offsetting her wildly large, green eyes. The colour draws me in and at the same subconscious moment I notice her height. She is, let’s say, too tall, her cheekbones too wide, her jaw too large, and her Adam’s apple protruding. 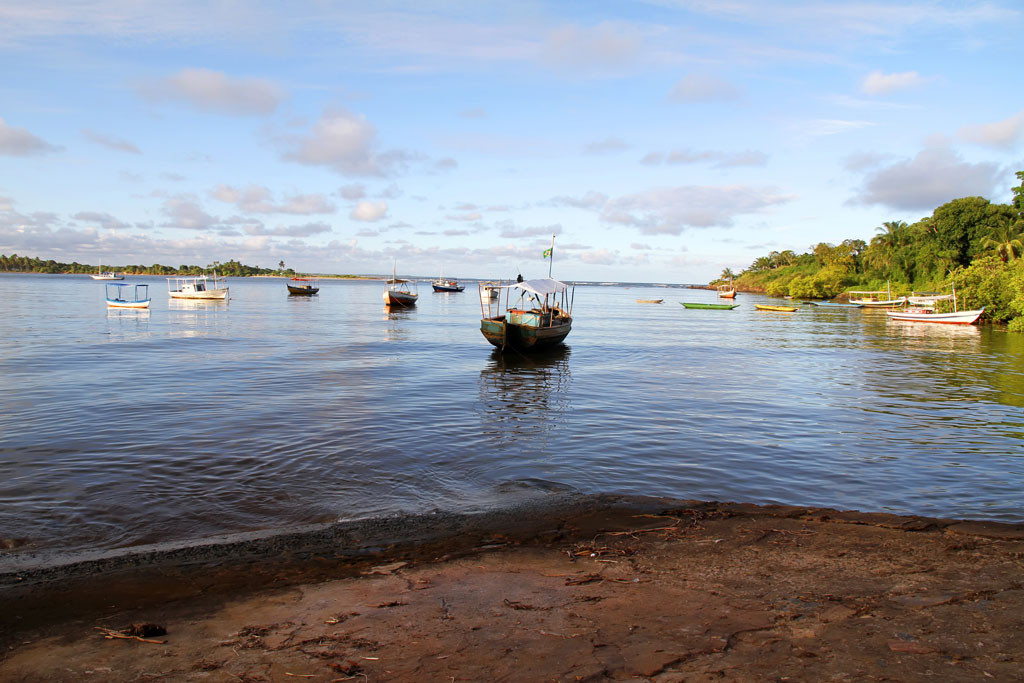 As I arrive home, the doorman says, “The sky will open up now.” And with that, it does, with a passion that I’d felt growing all day.

The ocean pulls outward with a roar, a whisper as it draws back in. Avenida Atlantica – a pearl necklace of lights – clings to Copacabana beach. This city is an odalisque. She reclines along a series of beaches. Leblon, Ipanema, Copacabana, Leme, Urca, Botafogo, Flamengo. In the distance, buxom mountains hug the bay, their island fingers extending into the water. These hillsides become black night, lavishly spread with twinkling stars, the bare bulbs free from urban sprawl. Hotel after hotel penetrates the sky and Christ, glowing, floating disembodied above it all. I can’t see Christ from here, of course. But I know he’s right behind me. 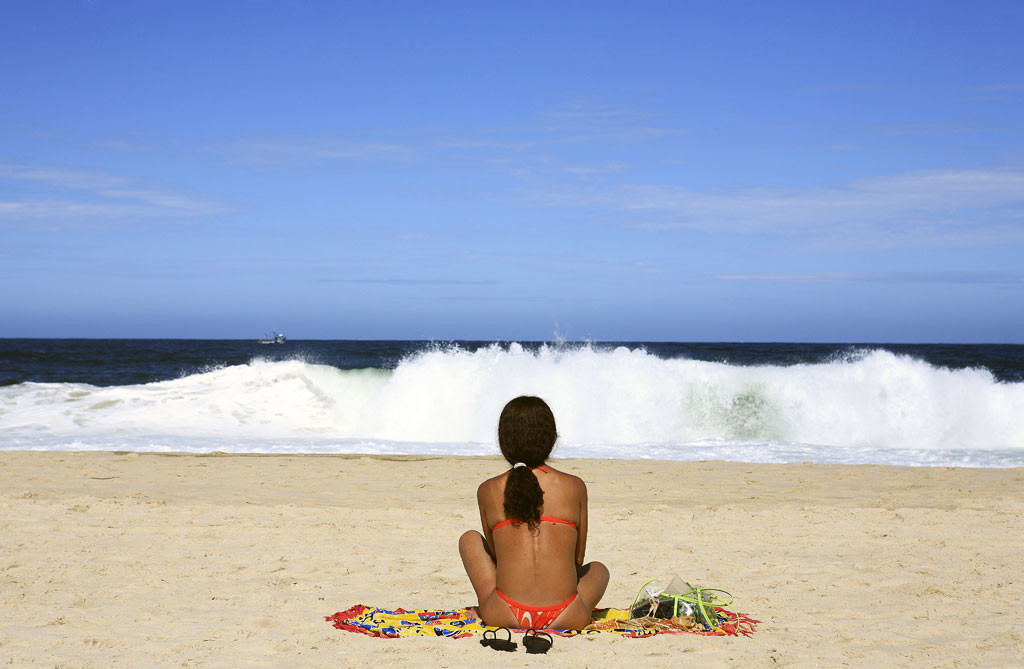