The suicide car bomber struck early in the morning. The concussion of the blast shook my building. Another day in Kabul, more wreckage and carnage on the street, routine horror, writes Patrick Janeway. 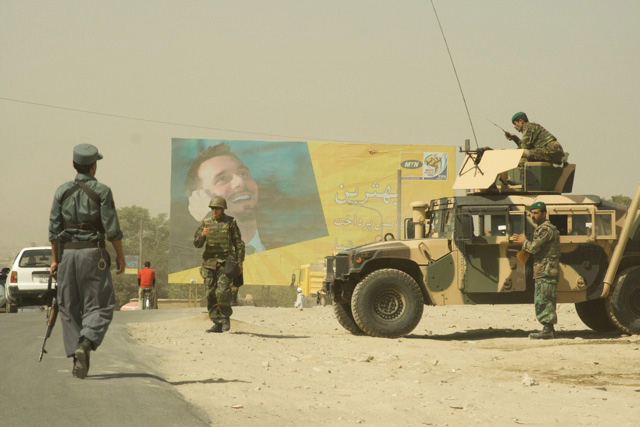 [two_third]One expects suicide bombings now, it’s part of the everyday ebb and flow of life and death in the Afghan capital. I’ve known war and destruction in other places, but you can’t get used to what high explosive and jagged metal does to the human body. Human entrails and body parts were splattered on a public wall. The crimson puddles so fresh, the blood almost glowed. There were severed limbs on the pavement and in another corner, the smoking, blackened, mangled torso of the Taliban bomber himself. How could anyone imagine this was a pathway to heaven?

[singlepic id=101 w=320 h=240 float=left]This time the victims were street sweepers, earning a hard living, a salary equivalent to little more that twenty pounds a month for doing a filthy job. Their widows and children without their breadwinner will almost certainly end up on the smog choked streets as beggars. There is no social welfare in Afghanistan and to be stuck in traffic in Kabul is to see a pageant of misery, as the amputees, the widows carrying their babies, the children and the old knock on your window, hands outstretched. As often the hands point to hungry mouths and to the sky, a pantomime meant to invoke divine mercy. Eight years on since the Taliban regime was toppled by Coalition and NATO forces, with billions spent on prosecuting the war and reconstruction, the Taliban and Hezb Islami guerrillas only grow stronger and the lot of the average Afghan is still one of crushing poverty, malnutrition, joblessness, illiteracy and fear. 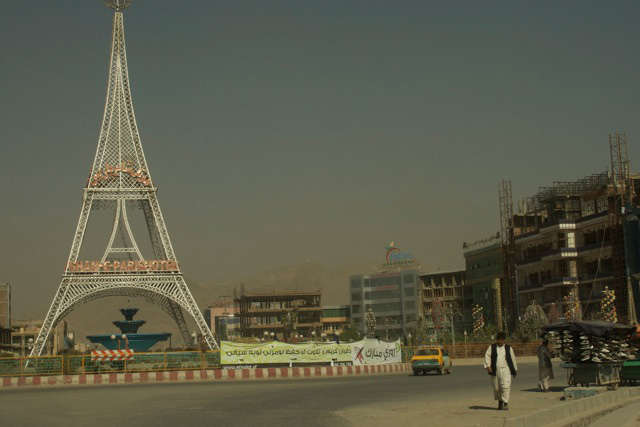 I work in an Afghan newsroom. I’m a westerner. I won’t say from where, nor will I identify the news organization I work for, nor offer my real name. I am a target just for being here and so are all of my Afghan colleagues just for doing their jobs. Death threats are phoned into the newsroom all the time and my bureau is like a small fortress. Having worked here before as a correspondent reporting on the war four years ago, I’ve returned to train Afghan reporters, to make them better story tellers and I have a key advisory role helping to run a busy Pashto-, Dari- and Urdu-speaking newsroom. It’s a job I value and there’s nothing that could compare to what I am doing that I might find in the west.  This too is the frontline and the cadre of young reporters I work with are conscious that they are trying to help build a new Afghanistan, creating a tradition of objective journalism where none existed before.

They are keen watchdogs in this putative, fragile and endemically corrupt democracy. With no insurance and for wages of less than three hundred pounds a month they risk their lives every day to tell the story of their people. My reporters stand their ground, half of them are women and as committed as the men, when they face even greater risks and so many women here in the larger society count for something less than chattel. Afghanistan fights for its very life hoping to turn back the onslaught of the black turbans and the medieval darkness they wish to re-establish, but my reporters don’t waver. My news director says quite simply, ‘Journalism is my religion and it is how I serve God.’

But the enemy is at the gates, quite literally and inside the capital itself. The Taliban operates in three quarters of Afghanistan and nobody can really identify how many militant and terror cells function inside Kabul but some of the shootings and bombings in recent months have occurred virtually on the doorstep of the presidential palace. Then there are the kidnapping gangs doing a brisk business snatching wealthy Afghans and westerners for ransom. Kidnapping now accounts for 8 percent of the GDP. According to intelligence analysts a quid pro quo exists between the criminal gangs and the militants, to let the body snatchers do as they will to sow terror and fear, destabilizing the city all the more, especially ahead of national elections, six to nine months from now. So I lead a strange cloistered life much of the time divided between long days in the newsroom and lockdown in my guesthouse, behind the barbed wire and the blast tape.

I don’t go anywhere without a retinue of heavily armed bodyguards, my SUV going at speed whenever possible. I’ve asked my driver to change the route constantly and to never pick me up at the same time. The soundtrack of my life is punctuated by the metallic click of AK-47s being cocked and the Dari chatter of my security detail on walkie talkies. If worse comes to worse, there’s a hideaway pistol I’m meant to reach for. Traveling by night is the most worrisome. Few of the streets are illuminated, save for the ash can fires of the guard posts of the Afghan National Police, a force that largely is still badly led, indifferently trained and equipped and suffering from low morale. I joke to other expats that a troop of well determined girl scouts could over-run my neighborhood. 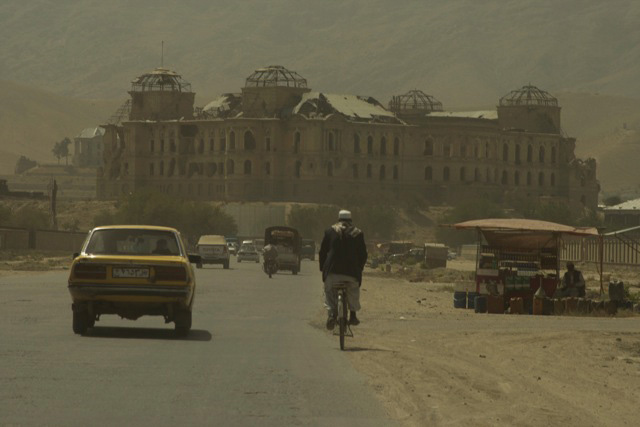 Every time you approach a stationary car in the darkness or see one rapidly approaching alongside or behind, you can’t help but think ‘is it a snatch team, a hit squad or a bomb?’ One of my senior journalists echoed the same concern to me this morning. ‘Every time I see another car, I don’t know what’s going to happen, will it explode or is it coming to kidnap me?’ We worked together four years ago and I am happy to have him in my newsroom and proud he’s reached a top position. He showed me pictures of his two young children and asked ‘what about them, what future is there now for them, I have no hope.’ And then he reminded me the proper war is not just in the provinces either, as the fighting spreads like a bloodstain not just in the south and east but also now the north and center of the country. ‘I’ve been shot at twice there, in my village, so I can’t go visit, though its only fifteen kilometers from Kabul.’

Because the handful of bars and restaurants where westerners congregate can readily be targeted, social life in Kabul takes place behind closed doors. But I haven’t been terribly interested in exploring the excess drinking and debauchery that can typify R & R for some of the ‘internationals’ here, I’ve been more curious to discover what the Afghan intelligentsia is doing.  I was lucky enough a few days ago to attend a soiree with members of the deposed royal family, many of whom are at the core of private efforts to rebuild. Most of them had spent much of their lives abroad in exile or as children of diplomats, but always returned to Afghanistan, because the pull of history, ancestry, duty and home was too strong to keep them away.

They were as urbane, learned and worldly a group of people as you’d meet in any first-class world city, but they weren’t poor, carbon copies of westerners, they were themselves and unmistakably Afghan. As they were all nobles of course they were impeccably dressed and the women were exquisite, clad in a combination of Paris, Milan and traditional finery. I noticed almost all the women, like aristocrats everywhere, looked nothing like other Afghans. They had fair Persian faces like Benazir Bhutto did and it made me think that a lot of Iranian blood flowed through the veins of the oldest families since the time of the Persian empire. Every one there was doing something to rebuild Afghanistan, running foundations, charities, educational programs, everything from demining to literacy, though all expressed despair at the state of governance.

Not a few were artists and it felt very much like a salon. There was wonderful old Ravi Shankar music playing (and all of Afghanistan has a love affair with India) but the pièce de la résistance was the live performance later: two traditional singers, sitting cross legged on the floor like everyone else, with the tabla drums and a harmonia hand organ singing ancient songs that Captain Burton would have loved to hear.

It was marvelous, a deliberate effort to ignore the reality outside the walls and conversations were full of hope and defiance that the Taliban could be held back. But there was sadness too, a clear sense that all could fall again and, already in internal exile, leading undercover lives, the court would once more have to pack its bags.

The reality of this place cannot be escaped in the end. One of my top editors this morning told me how close a call he had over the weekend on the Afghan-Pakistani border. He had meant to travel to Peshawar overland from Turkham, the main frontier crossing between the two countries. An old friend of his luckily recognized him and stopped him before he went over. He told him bluntly, ‘The Taliban control the road all the way to Peshawar, the Pakistani Army is not there, the Taliban can do anything it wants, if they stop you they will shoot you or behead you, you won’t come back.’ My editor then immediately called our news director as he too was headed overland to the border. His infant child has been gravely ill for weeks and may die from a severe infection. There isn’t a hospital in Kabul that can treat his baby, so Pakistan was the only choice. But no more. It seems many of the customs agents also work for the Taliban and passports stamped with a western visa are an instant death sentence. My editor said, ‘between my foreign visas and the government ministers in my cell phone, I wouldn’t have made it, I can’t go to Pakistan anymore.’

When I shake my head in disbelief, my editor, who escaped the border crossing, sighs heavily, tells me he is going to get a pistol and concludes ‘we have to accept that NATO has already lost the war.’ God I hope not. Another day in Kabul, another day in a city and nation under siege.
Patrick Janeway is a pseudonym for security reasons.[/two_third]