“The Great Beauty” (“La Grande Bellezza”) is a truly wonderful cinema experience. We are guided through the sights and sounds of the eternal city by the protagonist of the story, a writer called Jep Gambardella, who is seen enjoying by night a hedonistic lifestyle, sampling the modern city’s exotic clubs with his friends – and by morning observing the stunning visual palette of Rome – it’s beautiful buildings, bridges, river, and “beautiful people”. It plays as a modern “La Dolce Vita”, and it feels like the revisit is long overdue.
The theme of colourful imagination is set out at the beginning with an extract from “Journey to the End of Night”, Louis Ferdinand Céline’s misanthropic story of post-war France.
“Travel is useful, it exercises the imagination. Our journey is entirely imaginary. That is its strength. It goes from life to death…You just have to close your eyes. It’s on the other side of life”. 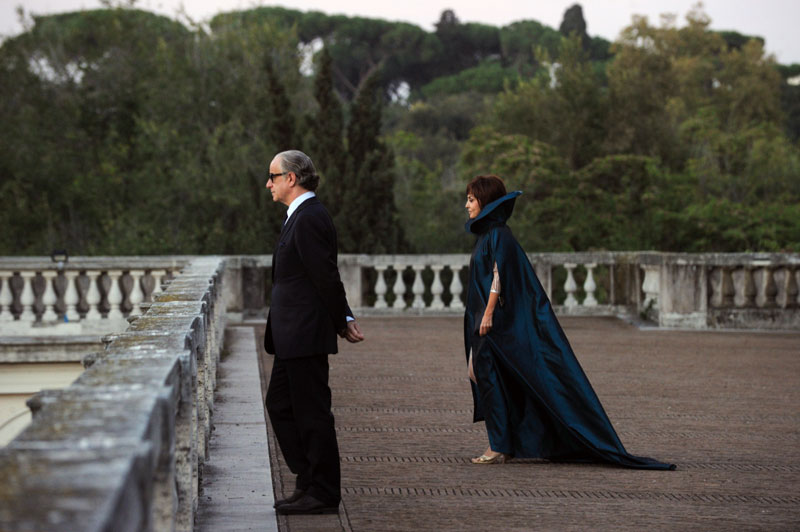 Thus we have a prelude to the many imaginative set pieces we encounter in the fi lm – of Jep’s apartment overlooking the Colosseum (placing him at the very centre of Rome society); of disappearing giraffe magic acts; of remembered idyllic blue lagoon beaches where a youthful Jep encounters romance; of bizarre moments of art performance by a cajoled child or a self-harming wench; and memorably of an exotic fl ight of birds fading into a crimson sky.
It is truly a feast for the eyes – and for the ears (Lele Marchitelli’s vibrant soundtrack has also been nominated for awards).

Jep is played by Sorrentino regular Toni Servillo, and here there is also a link to Fellini’s masterpieces -everything from the lined face to the thick-rimmed glasses is meant to evoke Marcello Mastroianni as he appeared in the Fellini movie “8 ½”. It is not all fun for Jep, however; a novelist, we learn, he is caught in a 40 year writing rut – the period of time which has elapsed since his one and only novel “The Human Apparatus”.

His magazine editor, the delightfully witty, blunt, and equally worldweary Dadina (who makes fun of her own dwarfi sm) accuses Jep of being lazy, for “never leaving Rome”. If it is true that Jep is imprisoned by the city, and by his own creative stagnation, then we, the audience, are the ones who gain. Alongside the ever present Tiber river, we are plunged headlong into a visceral visual palette.
Jep too uses his surroundings to escape and to reminisce. At fi rst it seems to be a life well-lived – and enjoyed; here is a man lucky to be alive, savouring his place amongst the bourgeois society of the city. 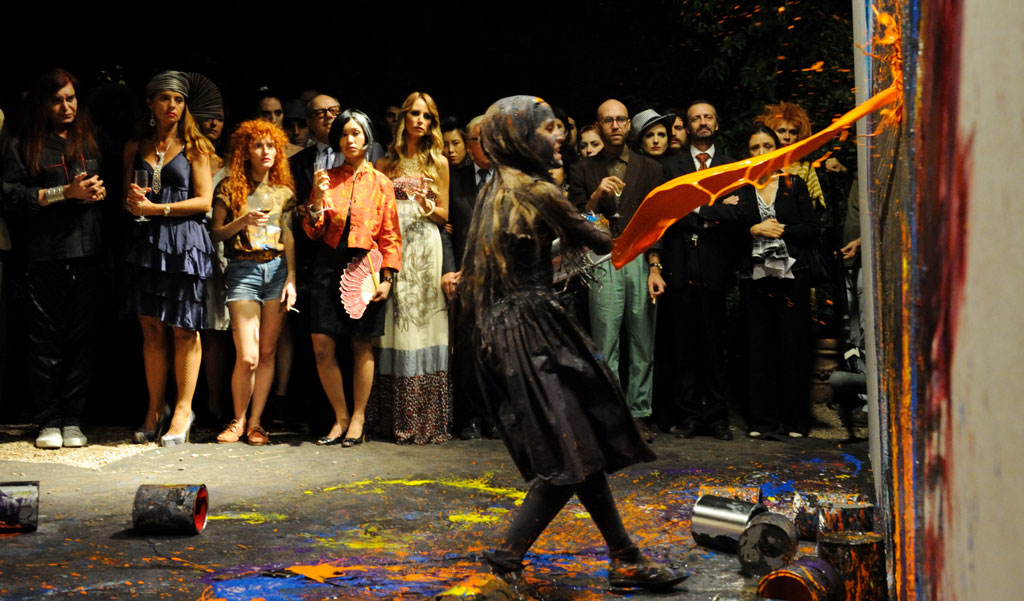 When each morning arrives, we share, through this aesthete’s eyes, his regular eventful walks back home; the sunny environs of the city, nuns picking oranges in the orchard, convent girls laughing, people walking their dogs, joggers by the river, the sound of bells pealing, and the wonderful patterns of birds in fl ight. Back at home we see his terrace overlooks the Colosseum itself. It is a sumptuous world. We see him lie in his bed and his imagining the ceiling above as a blue sea, where once in his youthful vacations he had swum and courted a young beauty, the love of his life, who, as he discovers mid-way through the story, has recently died.
If the fi lm is a study of Jep’s yearning for some replacement ‘great beauty’ in The City of Fountains, then we are also reminded of the decadence and hypocrisy of the bourgeois habitués and society in which Jep fi nds himself.
Whether it is the materialistic priests and cardinals or the vanity boudoir of the plastic surgeon, the darker modern mores are never far away.

The outcome of their relationship is another bittersweet moment in a fi lm full of such moments. It is hardly surprising though. Again we recall the opening scene extract from Céline’s “Journey to the End of Night”.

The particular extract chosen differs from much of the rest of that novel because it carries an almost hopeful message in an otherwise bleak landscape – a clarion call to the power of the imagination to overcome the vicissitudes of life. 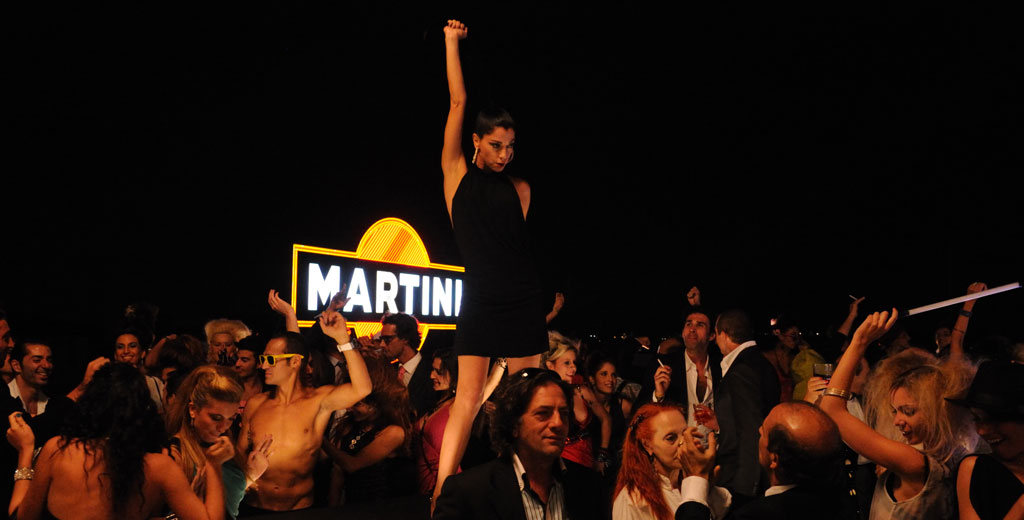 And so the realisation is that everything is juxtaposition, a sense that it is in the contrast where the great beauty of life is to be found. Nightclubbing hedonism and serene morning walks. Tired old cynic encountering autumn years romance. Religious corruption and saintly mystery. Dystopian novel (Céline’s) containing a poetic message of hope.

And so, where Jep is called to re-imagine a better life, or to understand again what constitutes ‘La grande bellezza’ (whether it comes from personal realisation or from the beckoning of the Oracle-like missionary Sister Maria), by contrast the stunning set pieces which confront us, the viewer, leave little to the imagination.

Sorrentino has brought us on an unforgettable 21st century reprise journey through the eternal city. As the credits roll, we see once again the stark beauty of Rome and its river and architecture. It is lucky for us that, in that respect at least, his achievement has been to leave the great beauty everywhere on the screen.

It is no surprise that the movie has won so many accolades. As well as beating off the competition at the Golden Globes, it was in the running for the Palmes D’Or at Cannes, on top of winning the coveted Best Film at the European Film Awards in December. And as mentioned above, its position as Italian entry on the short list for the Best Foreign Language Filmat the86th Academy Awards provides further indication of how well it is admired by audiences and critics alike.

Nevertheless, while Sorrentino will assuredly be proud of the accolades, and however deserving they are, I feel in many ways that the timeless themes explored and the wonderful evocation of that most eternal of cities make this movie indifferent to the transient prizes of the award season.

“The Great Beauty” stands on its own, unencumbered, for it is an instant classic.