Unfolding sails –  and the secrets – while crossing the waters of the inferno, purgatory and paradise, Stefano Rizzi tells Dantemag his story and concludes we must respect and let ourselves be enriched by nature

Summer is not the best time to interview a boat-racer but Stefano Rizzi, world champion in various sailing classes is in Italy for just a few days more.

He has just won the national title in the Moth class, the ‘flying sail’ dinghy, plying the waters of Lake Garda in only a thirty kilo hull, riding like a mini-catamaran 60 cm above the water. And he is shortly to leave for Hayling Island in England where he faces the challenge of the Magic Marine Moth, the world championship race of which he is the current holder. We got in touch as we wanted to dedicate this green issue of Dantemag to him. He agrees to meet at the Brenzone di Garda Sailing Club. 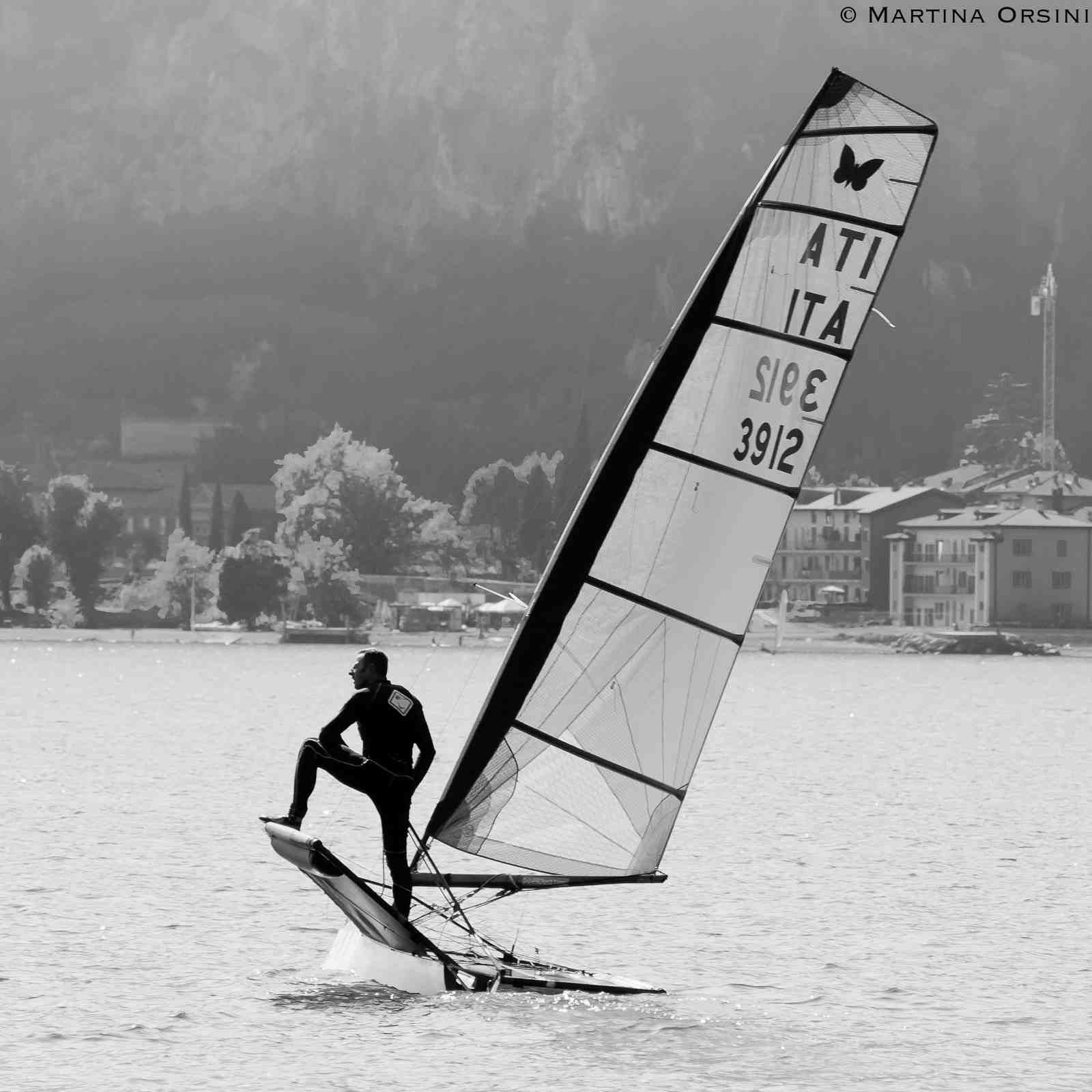 Rizzi is considered one of the best ‘trailer’ sailors, the ancient Greek ‘gubernator’ of sailing, the man who decides on the optimal sail and on-board steering in order to maximise the wind’s impact on his boat. Having grown up on the sea at San Giorgio di Nogaro, a harbour town in the Friuli region of north eastern Italy, he practically learnt to walk while on a boat. He was out on the water following orders from his father who was second-in-command or captain of large hydrofoils, so much so that when he was only four – “for fun”, he says – he had built a small Optimist dinghy out of wood with his brother – his very first boat!
“My whole childhood was sailing!” he exclaims with a big smile. “Being on water has always been an essential part of me. Ever since I was a little boy, I would dream of being a captain of a tanker or of some other huge ship” When he was older, he went first to the Trieste Nautical College and then he attended the Italian National Naval college in Livorno and so even his education followed a course ideally suited to him. Sea captain and helmsman for Italian navy boat races, he realised in the end that out of all the various types and classifications of boats there were, it was wind power that really was his thing

What does the challenge of being on water mean for you?
“It’s a sporting challenge, the competitive fighting spirit, pure and simple, pitting yourself against the other boats and teams in races, committing and investing more and more of your skill and techniques”

Let’s run through some of the landmark moments of his extraordinary career – hundreds of boat races, seven Round Italy races, three Americas Cups, three Round the Worlds, with his first being the Whitbread in 1993. He won the second Round the World race in 2001 on board the giant catamaran Club Med with which he set more records including sailing 655 miles in just 24 hours, beating the record for the fastest circumnavigation of the equator in 42 days as well as doing it sailing continuously with stops over 62 days. The next year, sailing the Amer Sport One he was placed third overall in the VOLVO Ocean Race 2001-02, which is the longest race, taking in as it does all five continents and involves being at sea for six months

What do you think it is about man against the sea that has so fascinated writers down the years?
“It’s not so much imagination, just the wealth of experience you gain”, he says weighing his words carefully before he finally answers. But it seems difficult to believe that when you take on challenges like that you succeed purely by dint of possessing a virtuoso technique. 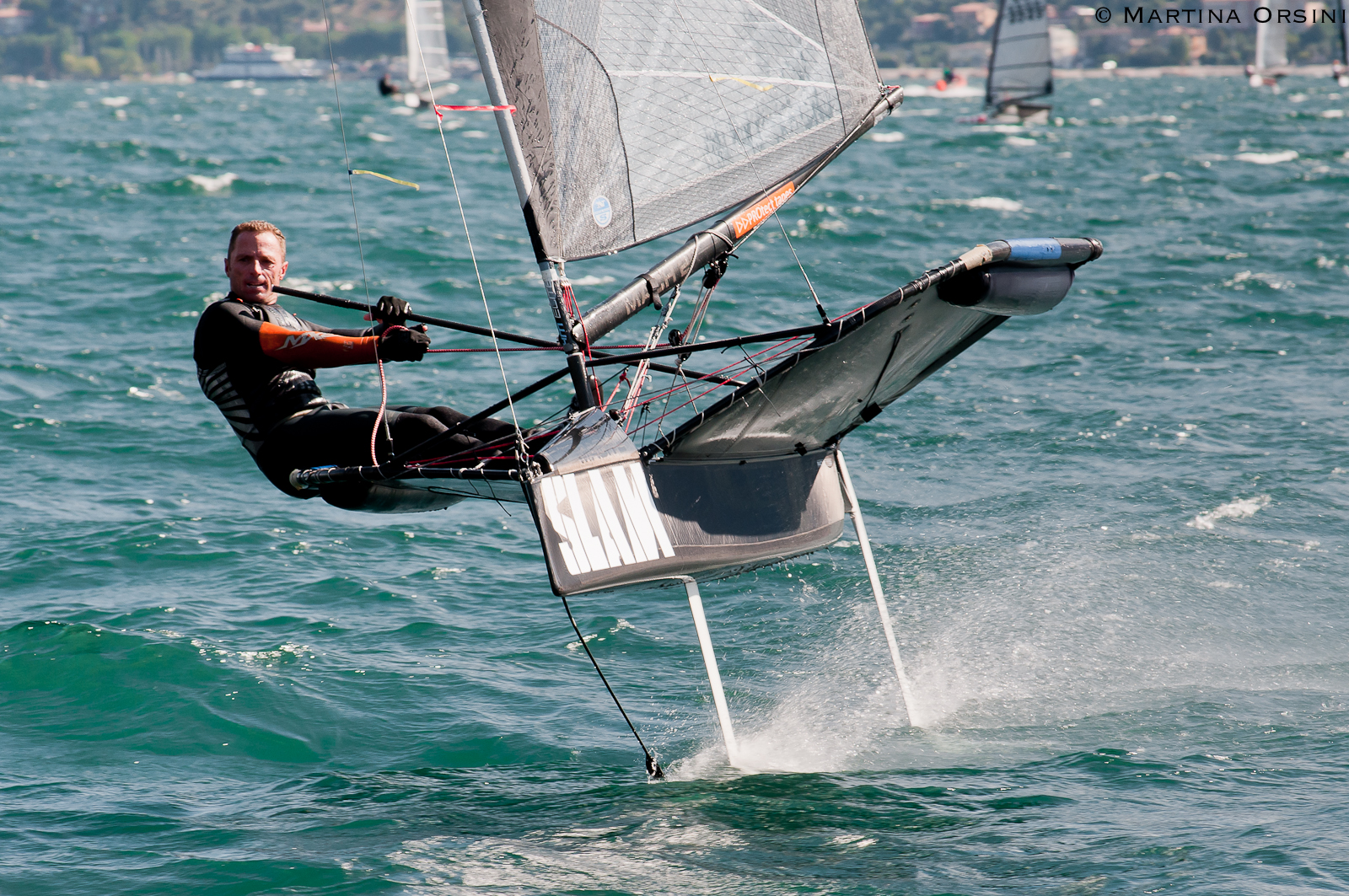 What? Even for those extreme experiences crossing oceans?  (I put this to him, hoping to be enlightened further)
“No, you’re right”, he replies with a smile that lights up his Arctic sea-blue eyes. “During those Round the World races I sailed in between ’93 and 2001, I gained such a wealth of invaluable experience. They definitely had an effect on my development as a person. In boat races, it’s different, you’re taking part in a very structured environment, the adrenalin and the concentration you need for that very specific period of time the race lasts and when the competition is over, you come down to earth; during a non-stop continuous round the world race, though, you become totally one with everything and everybody around you, your fellow crew members, the boat; your focus and concentration reach levels you never knew you were capable of. Day after day, you’re constantly doing shifts of four hours on, four hours off. It unleashes in you a state that goes beyond anything you’ve learnt professionally – it’s just you, stripped bare, and the sea”

How do you deal with the huge stress your mind and body are put through?
“The ocean-going racer has to be mentally alert to the dynamic that everything around you sets off throughout the crew and within yourself; you need to keep a clear head, constantly making little re-adjustments to every little change happening around you in real time. No two waves are ever the same and being in the thick of it 24/7 for months on end unleashes in you strengths and sensory powers that you’d never have discovered otherwise. It’s more than just a sporting challenge; for me it was an amazing experience” 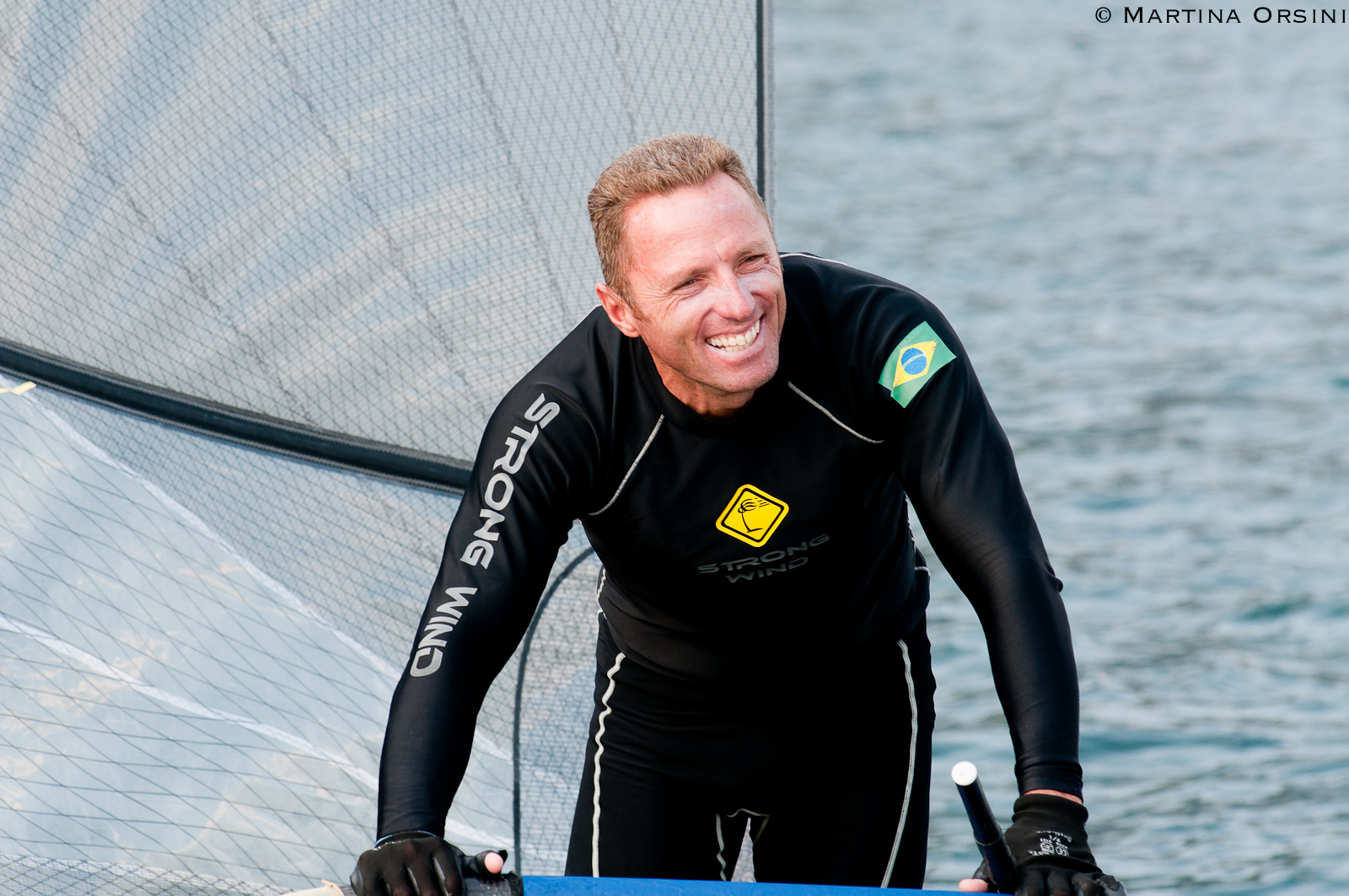 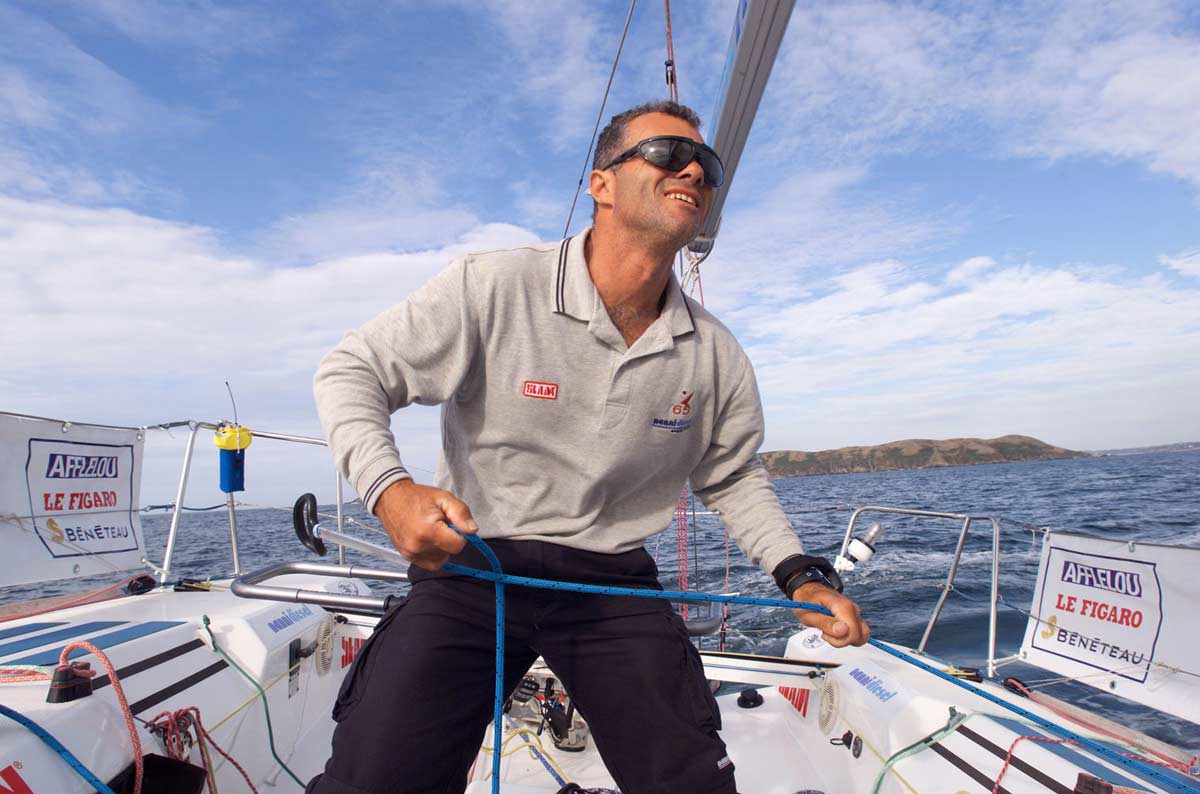 How much does your personality on the one hand or your technical prowess, on the other, impact on your survival skills?
“The more prestigious the tournament, the greater your technical mastery of handling the vessel needs to be. However, it’s true, your qualities as a person come into play as well. The water is not our natural environment, neither is the air – you’re forced to deal with an enemy environment. After THE RACE competition, I have to admit, stepping on dry land again was a shock and difficult to deal with. Sounds and smells, you have to readjust to everything, inside you. Luckily I’ve never felt a fish out of water on land, to coin a phrase, even though my natural character hates chaotic situations and big crowds. So you take home with you much more than just the trophies you’ve won”

In this battle, man versus the sea, how vast can the ocean become and how small can man get?
“Man never tests himself beyond his comfort zone. He doesn’t “take up” the whole world Maintaining progress together with holding on to his comforts means man harms nature. For him nature is a nuisance. We treat nature badly because we don’t acknowledge it, we don’t understand it properly. Those who manage to and recognise its importance do so as a result of the intelligence their sense of moderation has given them. So, yes, nature also gives you wisdom and inner enrichment. There’s nothing like the ocean – not even those that change from day to day. Your whole body and mind are required to make readjustments all the time. No-one can ever appreciate how mysterious and vast the ocean is. I just say, man has managed to land on the moon but he’s never reached the deepest depths of the sea”

Stefano Rizzi has recently left behind him his major ocean adventures in order to have fun on the water in his Moth dinghy , the small so-called flying hulls but even just “having fun” he has still become 2013 Master Moth World champion.

What is your next goal?
I’m delighted with what I’ve accomplished and what I’ve learnt from my experiences. I’ve achieved all the goals I set myself; now I’m just having fun, just sailing. Out of 280 days of boat races a year I’ll get up to being at 60 to 70 of them. When I was four I dreamt of getting out of the waters of San Giorgio; at 26 I dreamt of making it to the other side of the world. Now at 45 I just want peace and quiet, so my next goal is just to take it easy – that’ll be my biggest challenge yet!” 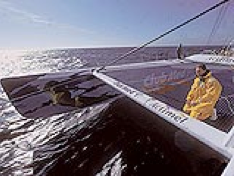 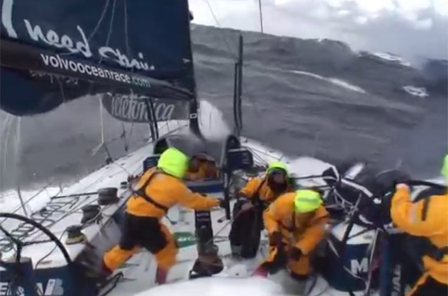 Just like Ulysses, who traversed the four corners of the world, the next target Stefano has set himself is to return to his Ithaca, his homeland. Essentially his travels have reinforced his conclusions that for man to live life to the full, he must stay connected to nature because it is only nature that can bestow strength and wisdom. One’s own personal Odyssey experiencing physical endurance, having the will to overcome, respecting those elements you can never fully conquer, both outwardly and inwardly. Our modern society has put too much emphasis on avoiding obstacles, probably leaving great areas of inner resourcefulness untapped. I believe indeed that it has reached its limits, a point of no return and we face a historic crossroads on our epic journey; we can only hope we will have the foresight to set ourselves on the right course again.