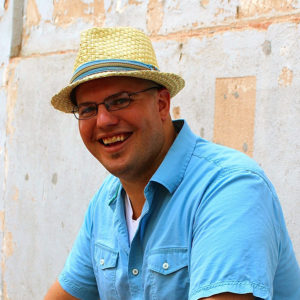 Derek Alvarez is an artist who gave up traditional paints and canvases to become a full time digital nomad, traveling the world with his wife and two toddlers.

His artistic journey began when he was young. But his career really took off after unusual circumstances.

His wife required emergency surgery and several blood transfusions after delivering their second child, Grant, who they almost lost 3 months later after he had an extreme reaction to a previously unknown food allergy. This inspired Derek to recommit to his art, and he resumed painting on his iPad. He first started creating this way out of necessity, when he and his wife were living in Saranda, Albania, in 2012 because it was difficult to get painting supplies at the time. However, Derek took to this new method of creating and it has been his preferred method ever since.

He prints his creations on metal canvases and ships them to patrons all over the globe, to avoid the hassle of carrying his art supplies from place to place. 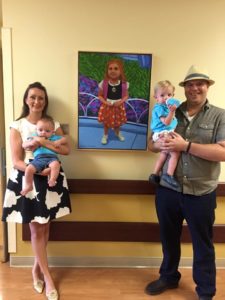 Derek’s art is based in emotional expression, informed by the experiences he has from being immersed in many cultures. He creates abstracts and landscapes inspired by these experiences.

He had shows in Scottsdale, Arizona and New York City while supplementing his income by working as a framer and waiter. He moved on to be a landscape designer and then a website designer with his wife, Monique, who he met in 2006. While the web business was highly successful, Derek realized that he had given up on his artistic dreams. The turning point was when Grant was sick in the hospital and Derek started drawing on his iPad to keep his mind off the dire circumstances. His lifestyle has also forced him out of the traditional gallery model, and he opened an online business to sell his art directly to clients. His Internet experience has allowed him to market the works properly and the results are in collections both private and public. Derek answers questions in an interview:

Why did you give up traditional paints and canvases? The story about your wife has something to do with it? 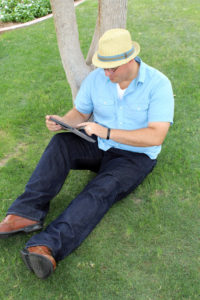 Derek creating on his iPad

I gave them up the first time my wife and I decided to travel overseas… We were living in Saranda, Albania in an apartment overlooking the Ionian Sea and I would paint out on the balcony using oil on canvas. When it came time to get some more supplies, I was having a real hard time finding them… I had to take a ferry to Corfu, Greece, which had an art supply store, but they were out of some things I needed. Not only that, but shipping my work was an issue because it could be quite expensive, so I took some inspiration from one of my favourite artists, David Hockney, and tried my hand at creating paintings on the iPad. I had experimented with digital art over the years, anyway… usually I would take a painting or drawing I had already done, take a picture of it or scan it into the computer, and further work on it with Photoshop. The process I currently use is entirely different and is actually much closer to painting in a more traditional way… I create a colour palette that I choose my colours from, then I select a brush (oil brush is my favourite because of the texture), then I create my painting by “brushing” my finger across the screen, stroke by stroke.

Where is home? Do you now feel a nomad?

I definitely feel like a nomad! I am American, and that means different things to the different people I meet, but home is wherever my family and I are laying our head at night. The biggest reason I feel like that is because my family is with me… if I was single, I’m sure I would get more lonesome and long for some familiarity. 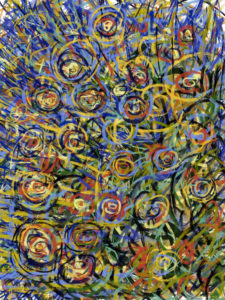 Will you settle down again in one place?

Right now, I don’t foresee it… we are enjoying all of the variety and different experiences we are having — and there are too many places we haven’t been yet!

How does it affect family life?

My wife and I are unique in that we both like to travel, but as far as our two sons… they don’t know any different. We all make friends wherever we go and we try to immerse them into the local culture by sending them to summer school or pre-school… At home, we still have playtime, watch cartoons, and read books together. The truth is that they probably see both of their parents more than your average American kid does… I know I didn’t see my parents as often as they do when I was a kid.

Hockney also paints on his iPad. Tell us how you began the process.

Like I said, Hockney was an inspiration to get started… I’ve used different painting programs than he does, but I also admire his painting style, as well, which I think results from our mutual admiration for my personal painting hero, Vincent van Gogh. 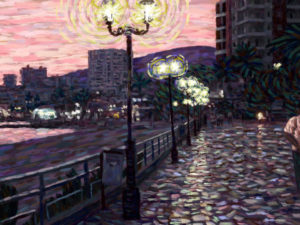 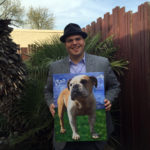 I have to print my creations to bring them into physical existence and I like how the vibrant colours and glossiness of the metal prints reflect what I see on my iPad screen. To me, printing them on anything else doesn’t reflect my original vision as I was creating… when I see my creations printed on metal, they are exactly as I saw them when I was creating them.

There’s never been a better time to be an artist, in my opinion… you can create whatever you want and sell it on your own because of the internet and social media. It’s no longer necessary to rely on a gallery for sales, so why give up 50% of your profits to do so? The other thing is when you work with a gallery, you don’t know who your collectors are… when I used to sell my oil paintings in galleries, I never knew who bought my art and that’s the way the galleries like it. Now, I can build direct relationships with my collectors and I can communicate with them whenever I have something new for them to see. 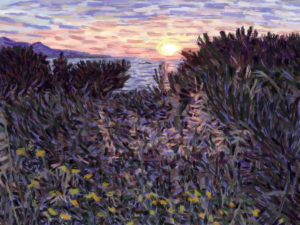 You have many different styles -abstracts, landscapes, and baseball portraits – does each attract an a different audience and how so?

I wouldn’t necessarily say I have different styles so much as I have different subjects, and this is because I have different interests — both conceptually and artistically… I’ve always had an affinity for portraiture because of the challenge of depicting the human form and the baseball portraits are an excuse to tackle that challenge while painting some subjects I’ve loved since I was a little kid. The abstracts are something I started doing more recently because I needed to free myself up artistically… for me, it’s like a painting lab where anything is possible, and my discoveries come back and show up in the rest of my work. They definitely each have a different audience, with some overlap, as well… men tend to like my baseball stuff more and women tend to like my landscapes and abstracts, so there is a challenge with marketing there, but I can only be myself and follow my interests and passions and let the chips fall where they may. Gerhard Richter is definitely an inspiration as an artist who also does this, as well as Hockney… and going back further, Picasso. 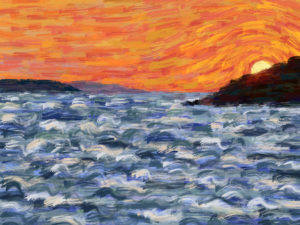 It’s only been positive… the countries we’ve been to with them (Mexico, Costa Rica, Greece, and Albania) are pretty family-friendly… their cultures tend to love families and children. So for example when we take them to a restaurant to eat, we don’t get the death-stares and eye-rolls that we received in the US… like, “I can’t believe they brought their kids here!” We’re more likely to get a warmer welcome… the waiters high-five our boys, smile at them, and pay attention to them… strange women stop to hug and kiss them… it’s a beautiful thing. 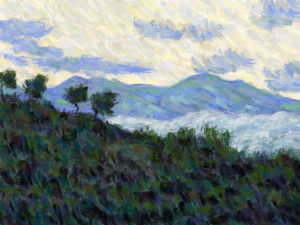 Mountains Outside of Saranda, Albania

Which special places you have to visit in places like Albania?

Our favourite places we’ve been to since taking our kids abroad have been Guanajuato, San Miguel de Allende, and Mexico City in Mexico; Jaco, Costa Rica; Corfu and Paxos in Greece; and Saranda and Tirana in Albania. Guanajuato is an amazing colonial city that reminds a lot of people of Spain… San Miguel is a very artsy city, although it is becoming very Americanized… Mexico City wowed us with their museums — especially the Aztec and Mayan artefacts, like temples and sculptures and we also saw a “Day of the Dead” parade that was really cool… it was all about nature in Costa Rica, we visited the rain forest and saw monkeys, crocodiles, and sloths… Old Town Corfu was a favourite for us for some amazing restaurants, architecture, and Greek culture… Paxos was a beautiful island with a quaint little town and we visited a turquoise water, secluded beach in Antipaxos… Saranda, specifically Ksamil has my favourite beach that I’ve been to… Tirana has been a great spot for us to relax for a minute until our next adventure because it is the capital of Albania and has a cool mix of culture, restaurants, and activities. 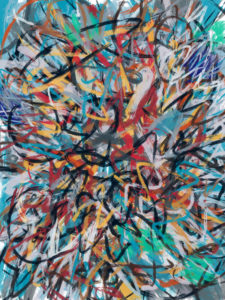 How to find great places to stay that are family friendly (without having to go to an amusement park)?

We actually haven’t been to a single amusement park! We’ve taken our boys to museums, puppet shows, playgrounds, the beach, boat tours, nature tours, and things like that.

How to enjoy romantic vacations while traveling with kids?

Wherever we go we usually stay for at least 3 months, so we network and find someone we trust to watch our kids for a few hours so we can have dates… we also find help cleaning our house and we frequently order delivery, which means we don’t have to cook all the time… and we can do these things for a fraction of what it costs us in the US. In Tirana, we’ve been using an app they have that has over 50 restaurants that deliver to your house… they have Indian, Chinese, Mexican, Spanish, Turkish, Sushi, Vegan, and of course, Albanian food… we order for the entire family and it typically costs us about $12-$15. I’ve been on a diet, so I’ve been regularly ordering from a Vegan restaurant and their menu has so much variety… it’s helped me stay on track with my weight loss and it’s been great.

You can view his work at DerekAlvarezArt.com 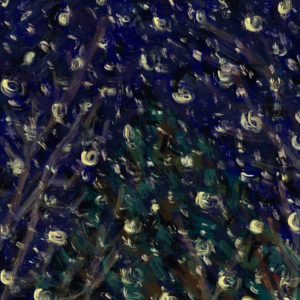 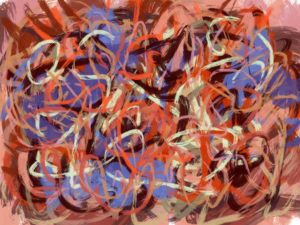 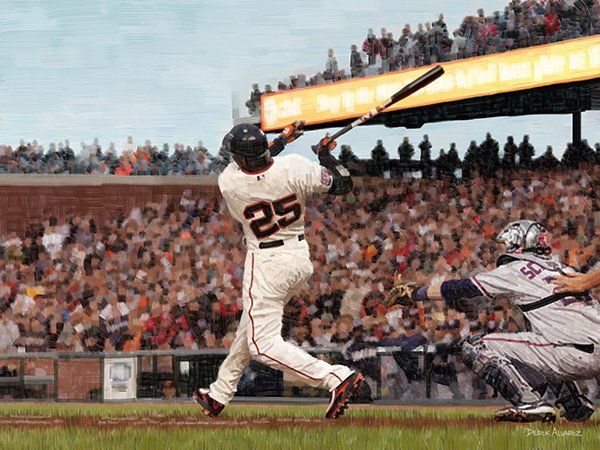 An example of Derek’s baseball paintings 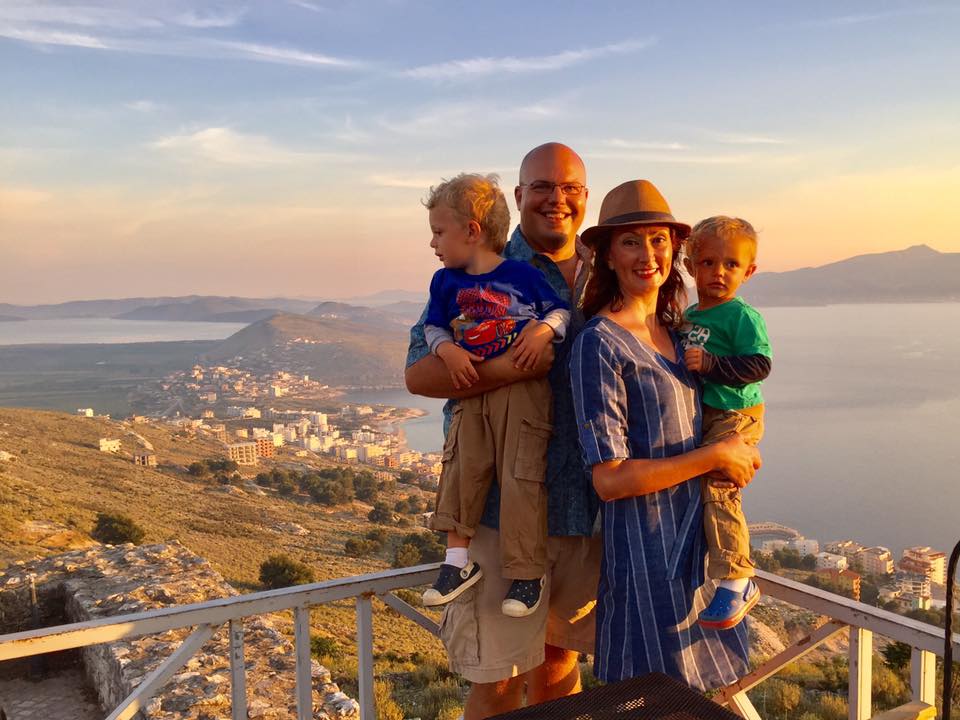