/ Art and Culture @en / There Is Nothing Like a Dame! Actor Philip Rham Surveys the History of Pantomime

There Is Nothing Like a Dame! Actor Philip Rham Surveys the History of Pantomime

Ever wondered why every Christmas children scream at a man in drag? Philip Rham delves into that peculiarly British phenomenon of the pantomime.

Ah Christmas! Yes, sometimes the traditions weigh you down but yet there are joys – not least is the magical event of the pantomime, together with all of its own traditions, of course, but an event that is a high point of the season. I freely admit some have become vulgar and commercialised but its true essence remains. 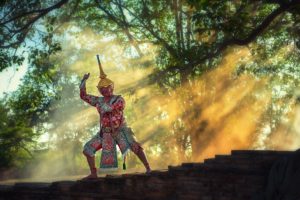 It is a phenomenon and there is no other equivalent abroad, not even in English-speaking countries around the world. For those in the dark, the pantomime is a family show put on around Christmas, based, somewhat loosely, on well-known fairy tales or stories.

The list is endless but the first were Mother Goose, and Babes in the Wood, followed by Sleeping Beauty, Cinderella, Puss in Boots, Aladdin, and many more. Then there is an indispensable list of stock characters. The hero or heroine, with a counterpart love interest, always has a father figure who is meddlesome with the essential moral equivalences of the Good Fairy and the Baddie and his side-kick. The crowning achievement is the addition of the Dame with her side-kick – I use the term ‘her’ advisedly, as the dame is always played by a man, dressed in outrageous costumes and make-up – indeed the tradition is that every entrance should involve an even more extravagant costume than the last one! Pantos have another cross-dressing role, that of the “Principal Boy”, namely a lady in tights, who plays the ‘straight man’ role.

In a lot of shows there are tumblers, acrobats playing animals (Puss in Boots), and the classic two halves of a pantomime horse or cow (Jack and the Beanstalk).

Like an immense Christmas pudding, this joyous mixture is swirled together with variations depending on the demands of the storyline, but always involving mayhem, interaction with the audience -”Oh No it doesn’t”, “Oh Yes it does!”, comments on topical issues, communal singing and classic dame routines – of that more anon!

Why does Britain have this curious event every Christmas? The history in itself is fascinating and not a little apposite, considering this is DANTE and we like an Italian twist. 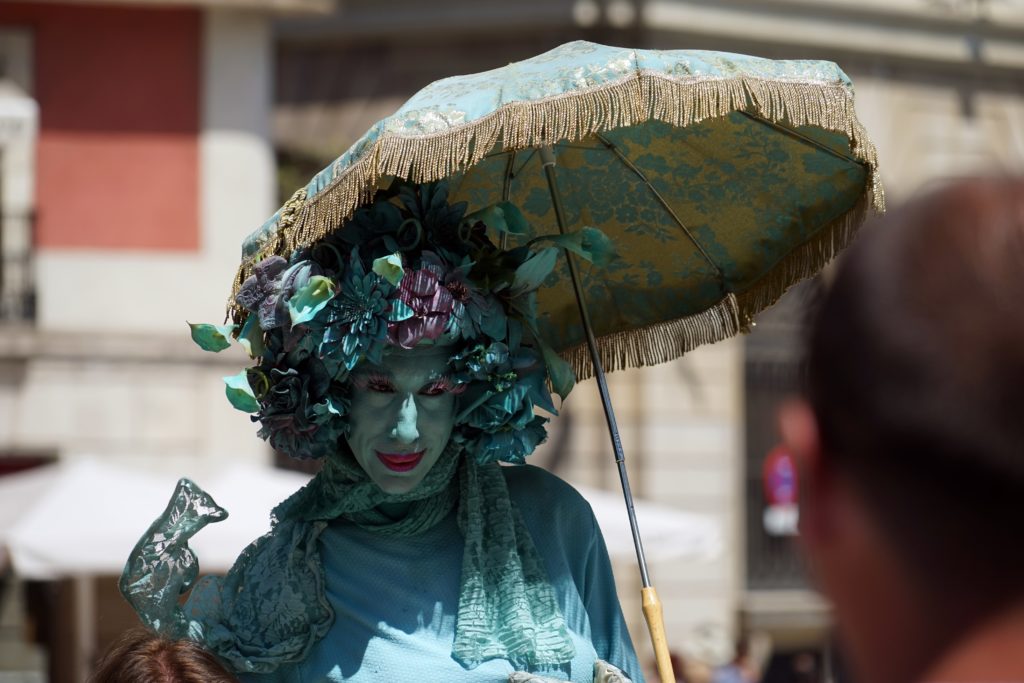 As you might have guessed already, the origins are quite obviously from Italian Commedia dell’Arte – that irreverent collection of stock characters, who delighted audiences with their buffoonery, dance, acrobatics, tumbling, music and above all topical improvisation. It, too, had quite specific routines and chase scenes involving transformations of every kind. 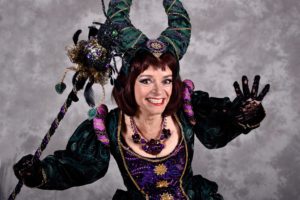 In Britain it was popular by the middle of the 17th century but it was John Rich (1692-1761), actor-manager of the Lincoln’s Inn Theatre (opened 1714), who has been called the father of pantomime because Rich made Harlequin the star of the entertainments, which as the word pantomime (“all mime”) suggests were wordless balletic shows incorporating chase and transformation scenes. It was actually at the Drury Lane Theatre, a major rival to John Rich, that the word pantomime was first used in 1717 on a playbill. However, it was Rich who danced and developed Harlequin into a trickster, with his stick which he slapped to signal another magical change of location or character (hence our word ‘slapstick’ for physical comedy) and he would continue to regale audiences every Christmas from 1717 to 1760.

Indeed the royal theatres relied on their pantomimes to keep them financially afloat for the rest of the year, which, ironically enough, is still the case these days. In fact Covent Garden Theatre Royal, no less, was built by Rich in 1732 on the back of his hugely successful shows. The resultant sequence with Harlequin became known as “harlequinades” and were still performed at the end, even after pantomimes had started using more conventional fairy-tales. David Garrick (1717-1779), actor-manager at Drury lane Theatre, in the latter half of the century astonished audiences when his Harlequin spoke for the first time and he commissioned Dick Whittington, Robin Hood and Children in the Wood and many more Charles Perrault fairy tales.

We are indebted to another Italian – well one with an Italian name who was actually born in London – Joseph Grimaldi (1778-1837), for the next stage. He edged out Harlequin as the star of the show with his clowning antics and made pantos verbal, earthy and comedy-centred. His first great success was Harlequin and Mother Goose or The Golden Egg at Covent Garden in 1806. During the 19th century, the stage effects with flying scenery, water and trap doors grew so elaborate that one show at Drury Lane, renowned for its pantos, cost £10,000 and lasted five hours! 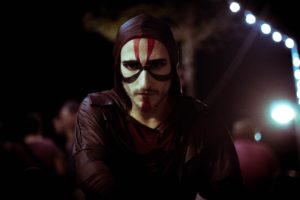 It was with the 1843 Theatre Act which allowed any theatre to use the spoken word – before you had to have a royal patent – so that the wordplay, audience participation, principal boys and dames all became part of the mix. What was exciting for Victorian audiences was that, despite strict rules about exposure of feminine flesh, there for all to see were principal boys’ thighs no less, dressed in tights, starting as far back as Lucy Vestris in 1837, then the great Vesta Tilley and nobody in authority complained.

As part of research for this article I contacted a good friend of mine, David Alder, an actor with a long career playing in pantos, with specific reference to the phenomenon of the dame and the traditions associated. It transpires that dames can be earthy (Sarah the Cook) or quite refined (Douglas Byng specialised in a very highfalutin’ governess). The dame must never be unpleasant to the Principal Boy and she must never detract from moments of high drama, which, for the moral of the story, namely good winning over evil, need to be played sincerely and truthfully. 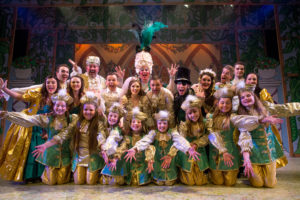 Then there are the routines, too many to go through them all here but let me mention just a few. The ‘Bath” routine involves being at sea trying to have a bath (a rocking truck) stationed near some portholes, through which water is thrown, miraculously missing the Dame (she must never  get wet or dirty as her elaborate make-up will be ruined!) hitting, instead, the hapless side-kick (Idle Jack, Simple Simon) every time. The ‘Sliding Plates’ routine has Sarah the Cook preparing for a banquet with two slides either side. Every time she says “Right-ho” a plate comes down but inevitably the word is repeated in a cumulative rush, ending up in a huge pile of broken crockery on the stage and mayhem ensues. This is where another tradition comes in handy – the front cloth comes down so the mess can be cleared up and Buttons or some such character leads the audience in a sing-along to a vast song-sheet that rolls down for all to see. 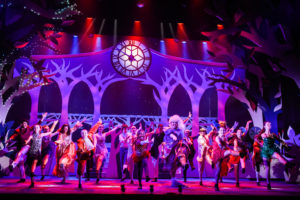 The modern panto has incorporated well-known stars from TV, variety and the pop world and they will inevitably insert their signature song or act, a tradition started way back in fact by the turn-of-the-century music-hall stars, who included can-can dancing, saxophone playing, ventriloquism acts and so on.

Despite this commercialization, this unique British institution will undoubtedly endure because the truth is children absolutely adore it – as do the adults in a secret kind of way. If these marvellous traditions which we have seen originate in that great Italian tradition of buffoonery, Commedia Dell’Arte, are kept faith with, then whatever the cynics may say about Christmas, there will always be a pantomime here in the U.K. to lift the spirits – oh no there won’t – oh yes there WILL!

Philip Rham is an actor, writer and translator

Subscribe to print via the PayPal link here www.dantemag.com

DANTE is in larger @whsmith such as those at train stations and airports; independent newsagents and online

We are also in selected airport lounges, London clubs and independent newsagents

see the links below. 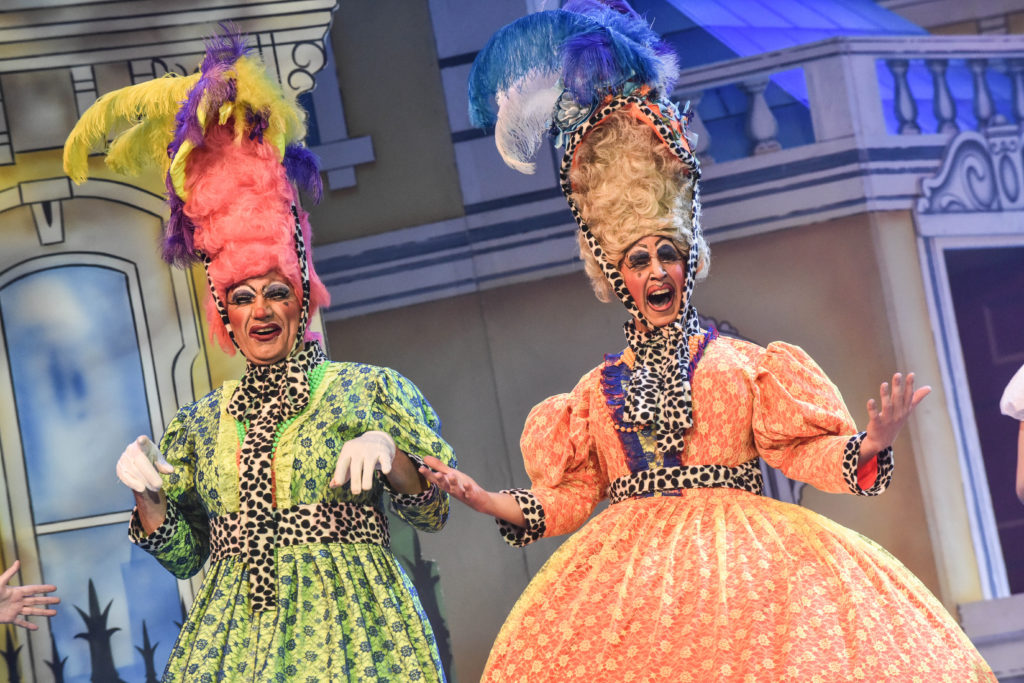