/ Art and Culture @en / A Poet in His London Corner: Robert Cole Reviewed

A Poet in His London Corner: Robert Cole Reviewed

Robert Cole is disarmingly modest in the forward to his new book: “London Poems is a slim volume written by a middle aged English fat bloke.”

Now that might be enough to put you off, but on the other hand I love its apparent frankness and that slim-fat joke. I’m sure many people would smile at just that, perhaps in the same way as they did with Kingsley Amis and his novel One Fat Englishman. 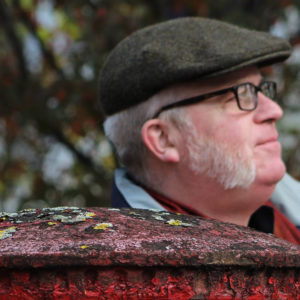 I am reliably informed by my editor that Robert is not full of girth: on first meeting what strikes you, he says, is the man’s sense of humour and encyclopaedic knowledge about nearly everything. By this I think he means that Robert is very clubbable and he clearly also has that poetic perception to be able to capture things that other people just ignore.

In Britain, a sense of humour goes a long way, but there is again a lot more to Robert than that. The forward adds: “A few more uplifting verses are chucked in to deflect accusations of rank melancholy.”

That slightly disparaging tone when describing oneself is often preferable to being too forward in self-promotion. However, one has only to take a look at the last page to realise that Robert has a distinguished career as a financial journalist, having worked on newspapers from The Independent to The London Evening Standard and The Times as well as Reuters.

The subjects of his poetic endeavours range from love and loss to self-examination and the woes of the world, in other words pretty much the things that drive a lot of modern writing. What makes this book special is that it is grounded in geography and family, a little like the poetic equivalent of a Google maps tracking location or a Facebook feed and fading family snaps that get wheeled out when people get nostalgic or maudlin on Mothering Sunday or Father’s Day.

What gives these lines more poignancy than some other collections is the simplicity of writing, shorn of excessive adjectives. Robert Cole avoids the common traps of overdoing hackneyed metaphor and alliteration. Some of his best poems are spare and economic, like he has come along with Occam’s Razor and excised everything apart from the essential.

One of my favourites is the closing On Seaford Head which I quote in full: 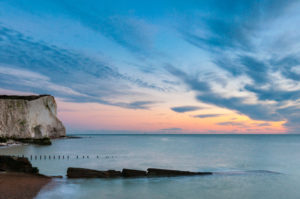 Yards from the encroaching drop,

His name, immortalised for now,

What he did, and where, and how,

Just occasionally he uses rhyme such as in Surrey Hills with lines such as this: 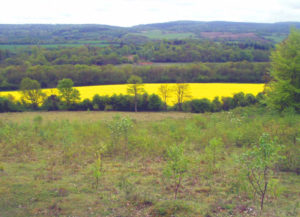 Marching on past hammer ponds and rills,

resting by bluebells, we feel our knees:

we’re sore and sunburned from the springtime thrills.

Running up Hackhurst Down, the evening chills:

the road grows slowly louder as a tease:

we are strolling tenderly through Surrey Hills:

It is only as I start digging around that I realise that the author is a man of many parts and interests. There are many trainspotters and twitcher and plane spotters and stamp collectors but there certainly can’t be many experts on post boxes. That should surely be his mastermind subject. I wait eagerly to see more poems on the subject.

I do like his recollections of family life; selling homes; feelings for his parents; a little vignette of a noon-hour rendezvous in Marylebone; and the long dry poem Inheritance with lines such as these, again unsparing in their openness:

What else do I inherit? A lengthened

torso, short legs and a paunch. Baldness and

weakness for nicotine and regular

need for beer and wine.

I am fascinated by the publisher which goes by the intriguing name of Wet Zebra. We all are familiar with a lot of publishers of poetry and others with strange names, Bloodaxe Books and so on. But this is pretty special. You have only to look at Wet Zebra’s list, with some really well-known names included, such as financial wizard Nicola Horlick, journalist Andrew Stuttaford and prolific author and rock journalist Paolo Hewitt. 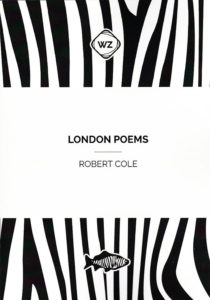 It seems the basic idea is that each prospective author is added to the Wet Zebra site and their pitched book goes ahead if it receives 1,000 likes from readers on the site.

That makes some sense, because the poetry market in particular is completely disintegrated. One might hope that the 1,000 likes may convert into sales of that number and therefore, without talking to the company, it does seem to have an element of crowdfunding or at least likely assured sale about it. There have long been all sorts of models for publishing, in some cases with authors foregoing royalties or committing to buying enough copies as to minimise risk for publishers, but this model seems particularly attractive given the quality of the works published so far.

Be that as it may, back to Robert Cole. I do like The Whitsun Wedding poem. The author went to Hull University, home of poet Philip Larkin. The well-made pieces he includes feature a flirtation with the sonnet in Breaking Point where he combines passion with financial terminology:

for reasons devil-close and worrisome.

For it conceals a rendezvous with fate…

Yes, this is a slim volume but not the archetypal sort. And in short, this is an impressive work with compressed power, arresting images and unflinching honesty.

Robert Cole will bring his poetry to the Edinburgh Fringe in the Man and Boy show with his son Maurice from 4 August to 26 except Sundays, Jurys Inn, Venue 260 at 6pm. £6.

THIS IS A VERSION OF A REVIEW PUBLISHED IN THE JUNE-JULY 2017 ISSUE OF DANTE – AVAILABLE IN LARGER W.H.SMITHS AND SELECTED RETAILERS. SUBSCRIBE VIA THE HOME PAGE OF WWW.DANTEMAG.COM