The Beatles, the Rolling Stones, the Kinks, the Who, Pink Floyd, Fairport Convention.

For those of you who are saying, “Fairport who?”, well, now is the time to find out.

Celebrations will be happening for all of this decade for veteran British bands that started in the 1960s and are now around in some form to mark 50 years of continued existence. In some cases, there has been new music; in others, re-releases of albums with extra tracks – and in the case of Fairport all of the above, along with a tour and its own dedicated annual festival to look forward to.

Fairport Convention is and was one of the finest groups of its kind. The band members first “convened” in the 1967 summer of love at a house in North London named Fairport and used by guitarist Simon Nicol’s doctor father. (The name origin is further explained in the present writer’s books The A-Z of Names in Rock and The Dictionary of Rock & Pop Names).

From there, the musicians set out on a career trajectory that initially saw them sounding a little like an English version of Jefferson Airplane.

And from there came what seems like an almost endless series of members joining and leaving the band. It has had more than 20 line-ups and dozens of stars passing through, including the acclaimed singer and songwriter Richard Thompson (who deserves to be better known too); the late great vocalist Sandy Denny; and David Swarbrick, who died last year and remains one of the finest folk fiddlers of all time. “Swarb’s” violin addition to the traditional song A Sailor’s Life started to move Fairport in the direction of folk-rock on the transitional album Unhalfbricking. Its follow-up, Liege and Lief, was arguably the first English folk-rock album. It was however unarguably both one of the best-known, and among the finest.

In last night’s concert, Nicol, the only remaining founding member, was keen to point out that only a proportion of the act’s output amounted to folk rock. Still, it is undoubtedly the genre to which Fairport is most commonly linked. 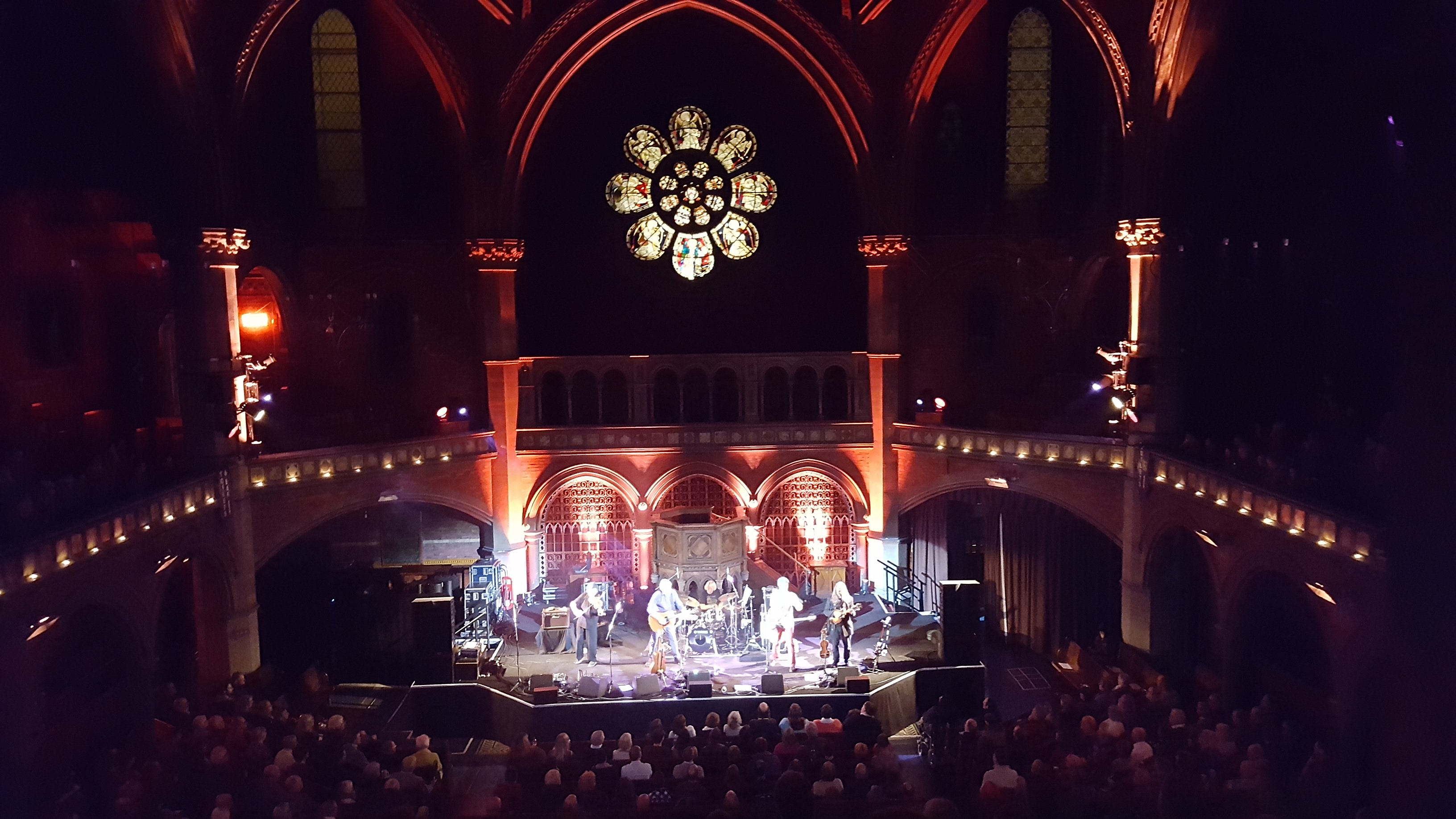 The gig last night at the Union Chapel in Islington will be followed by another at the same venue in May 27 which will mark the formal 50th anniversary of the first-ever show. The 2017 anniversary show is already sold out. Those wishing to catch up with Fairport however can investigate its remaining winter tour dates running just into March, then its spring tour in May and June. (Information: http://www.fairportconvention.com/#Fairport’s 50th Anniversary Spring Tour) 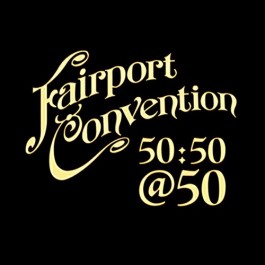 There is also the act’s 50:50 @50 album, a half live and half studio collection that marks a half-century of work and including a guest appearance by Robert Plant. With studio, live and compilation material, more than 50 albums have been recorded. (Apart from those mentioned, other recommendations include What We Did on our Holidays, Full House, House Full, Nine and – if you can get it – AT2/ The Boot.)

The concerts come with an endless stream of urbane humour in between the songs, with jokes that Fairport started with no hits… and indeed still has none. This self-depreciating comment is not quite accurate: it had a minor hit and a Top of the Pops outing with an amusing cover of Bob Dylan’s If You Gotta Go, Go Now sung in French and titled Si Tu Dois Partir. Fairport has also had a string of classic songs such as Who Knows Where the Time Goes; Now Be Thankful; Meet on the Ledge; Fotheringay and Farewell, Farewell.

The latest concerts include a smattering of new songs including the opener, Our Bus Rolls on, which is like an update of the earlier tongue-in-cheek autobiographical number Angel Delight. There is also a ditty, Summer by the Cherwell, which could well become a live favourite and an anthem to the group’s annual summer bash.

The current writer first got to listen to Fairport with the excellent compilation A History of Fairport Convention in the 1970s. I was later present as a reviewer at both the Broughton Castle festival which was the precursor to Cropredy itself and then at those shows in the 1980s: my salad days as a reporter on the local Banbury Guardian newspaper. During that time I got to meet the Fairport members and have been friends since. During those early concerts, I particularly remember outstanding versions of songs such as the epic Sloth, which could run to some 20 minutes with its extended, soaring solos in between verses. I was sitting right next to the stage and took some black-and-white Rolleiflex photographs which I mean to dig out soon. When I say that this was one of the greatest live performances I have ever seen, is perhaps worthwhile noting that I have now been to literally thousands of shows, festivals and gigs for my job as a music journalist.

The most recent Islington performance indeed had memorable moments and special kudos is in order to violinist Ric Sanders, who kept calm and carried on – returning from the shadows to deliver an impressive coda to the Ralph McTell song The Hiring Fair. This is a live favourite and on its most recent outing narrowly surpassed already impressive versions at the 2016 edition of Cropredy and the sterling performance to be found on the In Real Time album of 1987.

Nicol appears on my 1980s photos as a dark haired, clean-shaven man earnestly taking on songs such as the traditional Matty Groves. Now the silver haired, neatly bearded singer and guitarist – in Dennis the Menace stripy shirt – prefaces the song, which dates at least to the 17th century, with a coded series of comments about how leaders with no merit and trophy wives can come unstuck. The name Trump remains unspoken in the introduction to this parable of passion and power. (Someday I live in hope this song will be done as male-female duet again).

Those of us who remember the young multi-instrumentalist Chris Leslie joining the act will be delighted to see his virtuoso skills continuing ever wider and during the course of an average evening he dazzles on mandolin, banjo, flute and much else. As ever, Dave Pegg remains rock solid on the bass with Gerry Conway continuing to lock together with him on drums, such as on the instrumental Danny Jack’s Reward.

How listeners will react to the folky moments depends very much on personal preference: it could be that the traditional numbers such as Sir Patrick Spens or Toss the Feathers will be a turnoff for those in any way allergic to “hey nonny no” material.

There is however a lot of evidence that those who find this barn dancing, barnstorming style irritating is a number reducing rapidly. Instead, folk influences have found their way into so much mainstream music and charts thanks to the likes of Mumford & Sons – surely nowhere near as instrumentally accomplished as Fairport – or the growth of English country music thanks to the likes of twin sister duo Ward Thomas or The Shires. These young upstarts are seeing commercial as well as critical success, even though they may seem like pale imitations of the veterans who have just done Genesis Hall (good to see that back in the repertoire, guys.)

Fairport is known for its fondness for guests. At Islington, singer Sally Barker joined them for a likeable shuffling revival of the Sandy Denny song Rising for the Moon and finally and predictably for the anthemic Meet on the Ledge. Many in the audience have clearly been following the act for decades, with vintage T-shirts much on show. This prompted the comment from the band that they recognise both old faces and many clothes. Still there is room for a birthday greeting for a younger fan of school-age. Nicol remarks on how quickly the time has gone, with children at Cropredy soon growing up as the years whip by ever quicker. It can be safely said that many of those singing along to Meet on the Ledge on a cold damp February urban night indoors at the Union Chapel before the 10:30 p.m. curfew will find their way to an Oxfordshire field on what will hopefully be a warm dry August summer evening to do the same thing again before the midnight witching hour arrives there.

When my time is up I’m gonna see all my friends.

If you really mean it, it all comes round again.”

Guests include Petula Clark, Marillion, Feast of Fiddles, the Divine Comedy and the Trevor Horn Band. 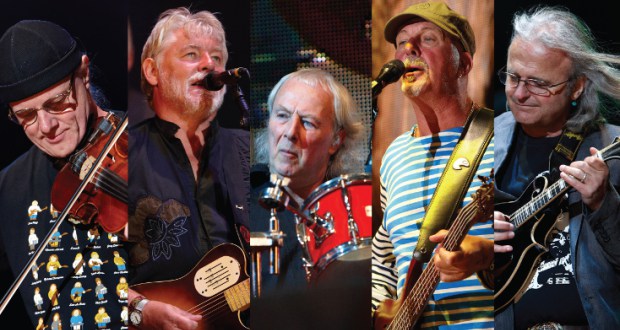 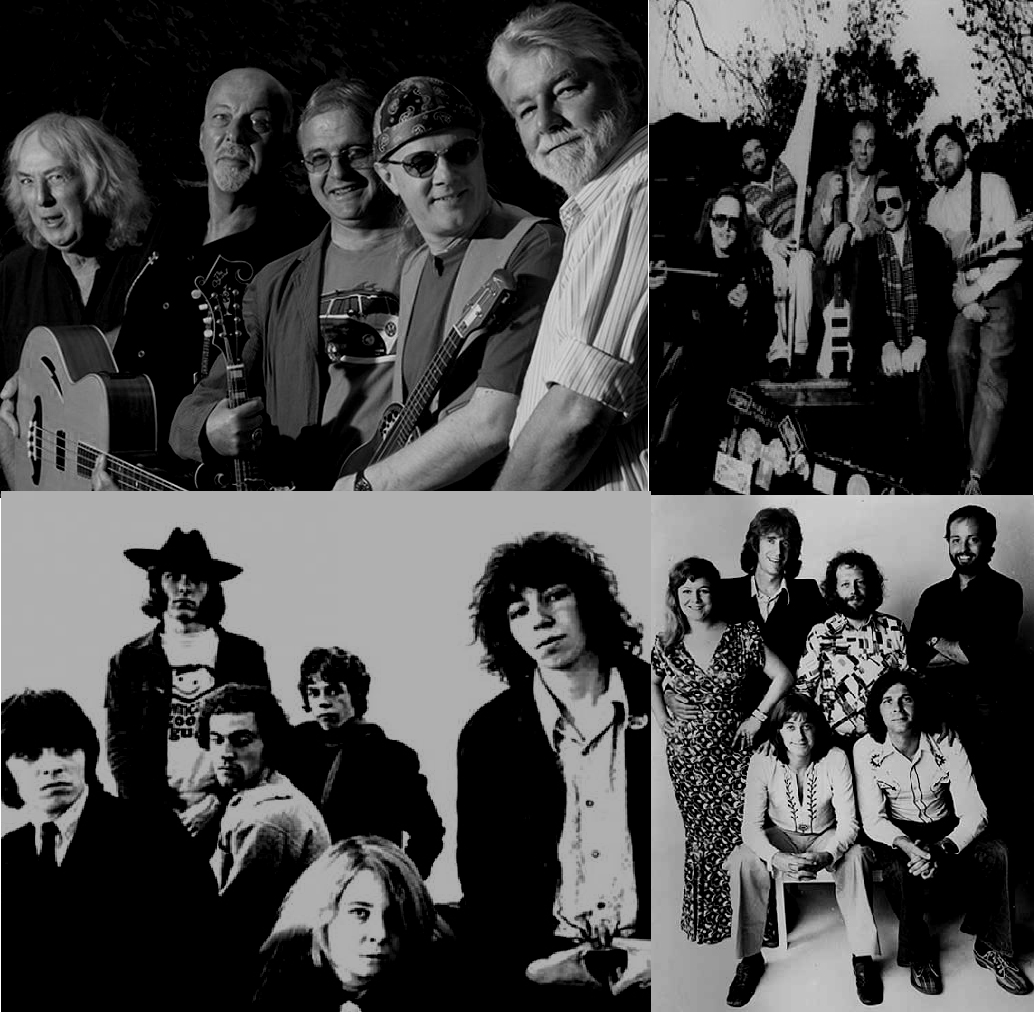 Images of Fairport including some of the classic lineups.