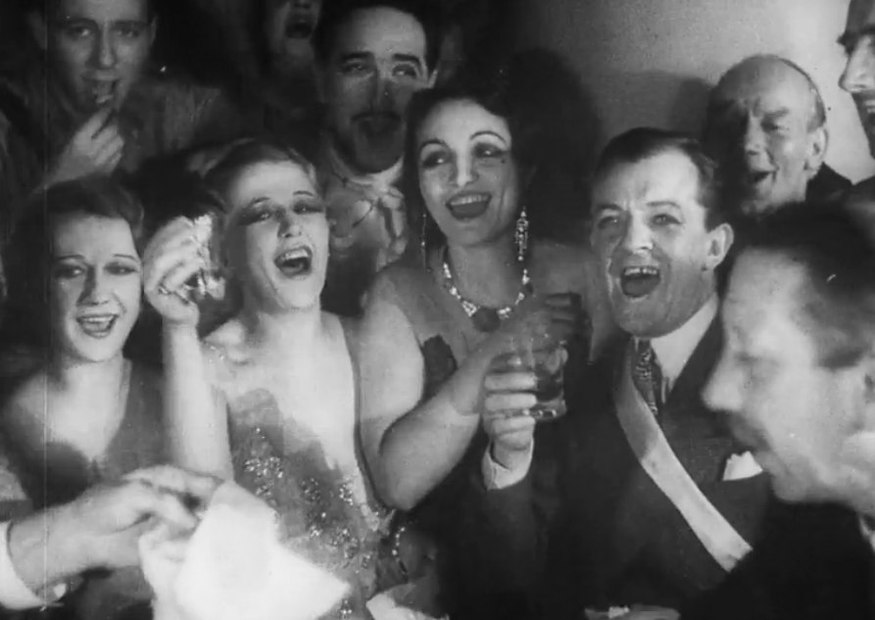 It is perhaps ironic that a man who forsook the noble art of cooking in search of fleeting fame and fortune on the stage, found both in ample quantity but today is best remembered for a cake. 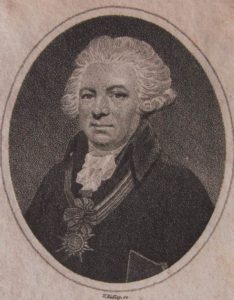 Robert Baddeley was born in 1733 and trained as a pastry cook, perhaps recreating La Varenne’s sumptuous recipes for his first employer, the sweet-toothed Samuel Foote.

Foote was an actor-manager, contemporary to David Garrick and the lessee of the Haymarket Theatre. He was a skilled mimic and playwright who attacked his rivals with satiric relish. Young Baddeley must have admired his master’s work and observed well, for, after three years travelling abroad in Europe as valet cook to a gentleman on the Grand Tour, he returned to London in 1760 and asked Foote if he would audition him as an actor. He succeeded and made his debut as Sir William Wealthy in Foote’s comedy The Minor on June 28th.

Baddeley’s culinary skills had no doubt been finely honed in the inns of France and Italy, but it was his knowledge of ‘Johnnie Foreigner’ that stood him well on stage.

By 1762 he had moved over to the Theatre Royal Drury Lane where he joined Garrick’s company. He put his experience to use for, as well as playing low parts and old men, he excelled in the roles of comic Europeans such as

Canton in Garrick’s play The Clandestine Marriage. His travels and his stage experience gave him the airs of a dandy and the reputation of a ladies’ man. “He loved as a great variety in his amours as in his clothes.” Baddeley met his match however when he eloped with young Sophia Snow, the 18-year-old daughter of Valentine Snow, Sergeant Trumpeter to King George 11. They married on January 24th 1764 at St Margaret’s, Westminster and Baddeley persuaded Garrick to make her a member of his company.
Sophia possessed no great acting talent despite playing such dramatic parts as 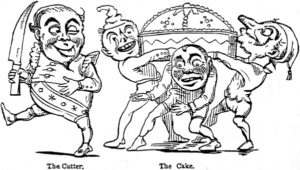 Imogene in Cymbeline, Ophelia in Hamlet and Cordelia in King Lear. Her forte was for singing and her voice secured her the part of Polly Peachum in The Beggar’s Opera and solo engagements at fashionable venues such as the pleasure gardens of Vauxhall and Ranelagh. But it was her looks that assured her success.

James Boswell, no slouch when it came to the ladies, wrote in his diary that he “looked steadfastly at that beautiful, insinuating beauty”. Baddeley, almost twice her age, was at first indifferent to her admirers and indeed seems to have encouraged the rich Jewish merchant Mr. Mendez, for “so valuable a friend was not to be slighted”. He did indeed call out George Garrick, David’s brother 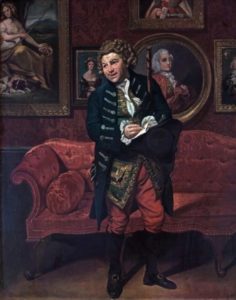 who had temporarily secured her favours, but this may also have been due to professional rivalry and the duel was a bloodless affair, one perhaps engineered to preserve both their Green Room reputations.

Baddeley was soon unable to compete or cope with the sheer number of Sophie’s noble admirers including Royalty in the shape of the Duke of York. They separated in 1770 and though they still appeared together on stage never spoke to one another, “except when the utterance was dramatic”.
Sophie continued her career as a full time courtesan and part time actress. Official mistress to Lord Melbourne and patronised by the Duke of Northumberland and many other entries in Debretts, she was showered with gifts and money. Bolstered by laudanum and addicted to the gambling tables, she pursued a career of total extravagance, a flamboyant life style that of course, as her beauty and admirers began to fade away, soon became impossible to maintain. She died penniless in 1786, her sad and premature end, as some would have it, a “salutary example of the perils of a life dedicated to vice”.

Robert achieved neither her degree of fame nor infamy in his lifetime but soldiered on, a stalwart and loyal member of Garrick’s company. In 1777, he became one of the founding directors of the Drury Lane Fund and was the last actor at the theatre, as one of the King’s Servants, to proudly wear the gold and scarlet royal livery. Held in high regard by his fellow actors he died, as it were, in harness. While making up for his role of Moses, the part he had originated in Sheridan’s The School for Scandal, “he was seized with a fit” and was carried back to his house in Great Queen’s Street. He passed away on the 20th November 1794 and was buried in the churchyard of the actors’ church St Paul’s Covent Garden. 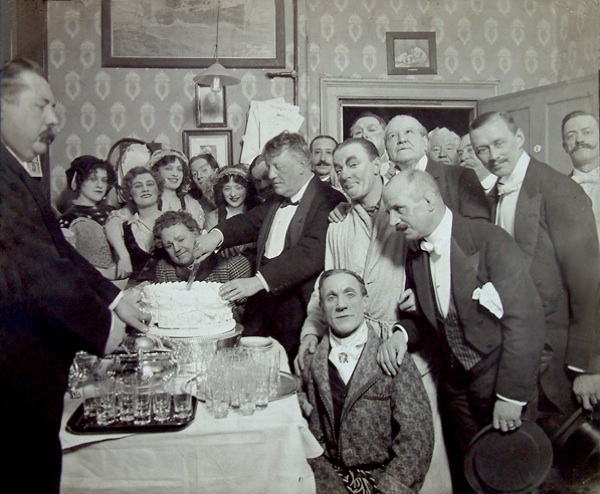 It was a bequest in his will which was to immortalise the actor. Baddeley wrote that “I hereby direct that the sum of one hundred pounds stock in three per cent Consolidated Bank Annuities may be purchased immediately after my decease… 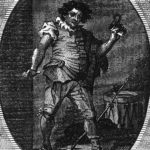 to produce as nearly as possible the Annual Sum of Three Pounds which… I direct shall be applied and expended in the purchase of a twelfth Cake or Cakes and Wine and Punch or both of them which…it is my request the Ladies and Gentlemen performers of Drury Lane Theatre…will do me the favour to accept on twelfth night in every year in the Green Room.”

Actors throughout history have seldom resisted the offer of free food and drink. The first Baddeley Cake was accordingly cut in 1795 and was an immediate success. In 1821 the executor of Baddeley’s will transferred the money to the trustees of the Drury lane Theatrical Fund “for the purchase of a Twelfth Cake and Wine for ever” and in all more than 200 fine confections have to date been offered up to the various companies in residence on Twelfth Night.

The scale of the festivities has varied vastly over the decades. In the early days, a formal toast was drunk to “The memory of Baddeley’s skull!” in the Green Room of the theatre. This referred, not to the actor’s head being used in later productions of Hamlet, but to the brain that had conceived the generous bequest. But by the middle of the 19th century, Baddeley’s contemporaries had died and he had been all but forgotten. The tradition of the ceremony limped along but the cake was a modest one, baked annually by the landlord of the old Albion Tavern, which used to be opposite the stage door. 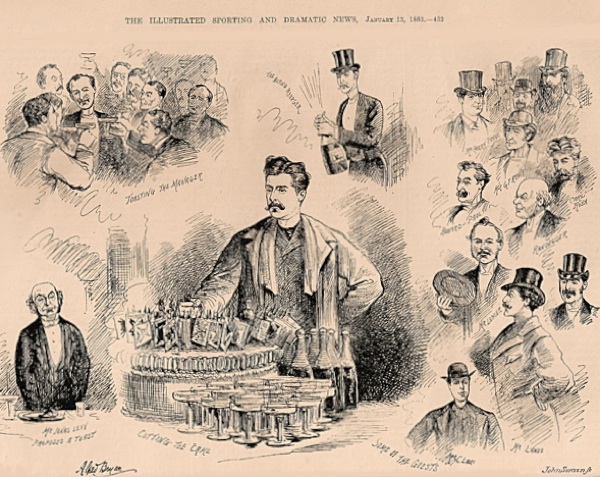 It was Augustus Harris who restored both the ceremony and the man to instant public recognition. Harris was a formidable showman and manager of the Lane from 1879. His devotion to the theatre was such that he was given the nickname of Augustus Druriolanus and his spectacular pantomimes were legendary affairs starring the likes of Dan Leno and Marie Lloyd. On one Christmas season, he conceived the idea of celebrating the Baddeley Cake with a huge party onstage using his Cinderella ballroom scenery as the background décor. Six hundred guests including the Prince of Wales were invited to his first party and the festivities and dancing lasted until six in the morning. 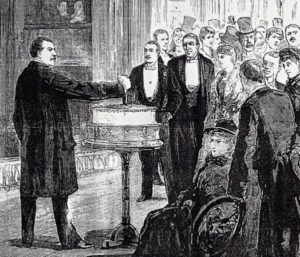 These extravaganzas lasted for several years but after his death in 1896 the Baddeley Cake Night gradually reverted to its beginnings, becoming a smaller, more intimate and exclusive celebration.

Sadly, the World Wars caused some ceremonies to be cancelled, not through fear of any enemy action but because of that dire doom of cakes, a sugar shortage.

Since the 1940s, the ceremony no longer takes place backstage but is conducted in the Grand Saloon of the theatre, a perfect setting, for this supremely elegant room dates from 1812. As Master of the Fund, I am proud to say that the cutting of Baddeley’s Twelfth Night Cake is by now the oldest theatrical ceremony in existence and to this day continues to attract great interest and generous help from all involved in our business.

Tradition decrees that each Cake shall be different every year and our skilled cake makers unfailingly produce a unique and delicious creation which takes its theme from whichever show is currently playing the Lane. And so, on January 6th 2017, the Cake will be themed and dedicated to the Charlie and the Chocolate Factory company. It will draw a full house as it sits proudly on the centre of the high table as befits a West End confectionary Star.

But after it has been sliced with a Georgian silver cake knife and before it is nibbled, munched and then devoured by all to the last scrumptious crumb, we will raise our glasses and the toast will both be familiar, comforting and grateful. We will drink to the memory of Robert Baddeley, Pastry Cook and Actor. Mr. Baddeley? We salute you, Sir! 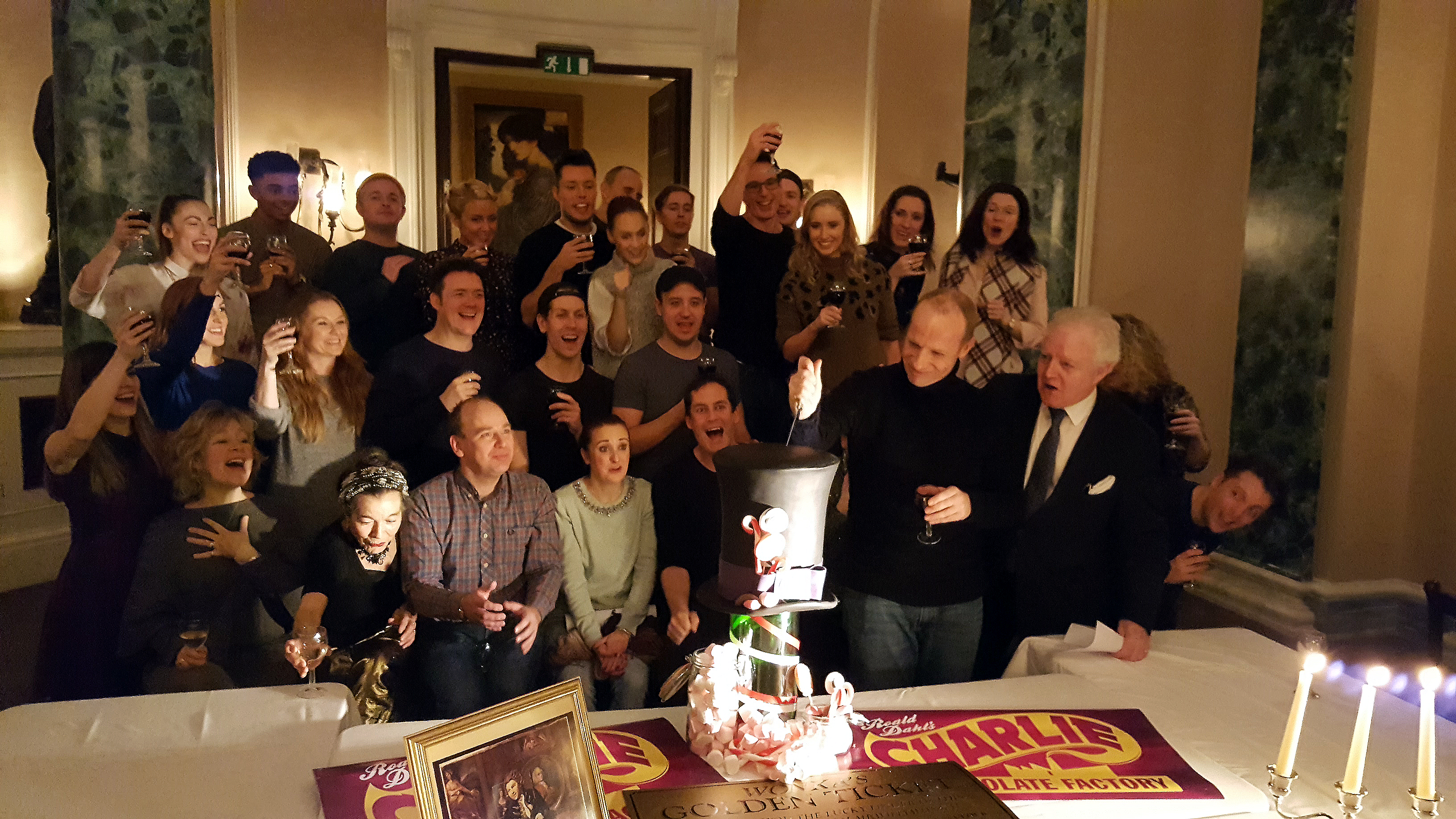 The cutting of the 2017 cake as “Charlie & The Chocolate Factory” comes to an end at the Theatre Royal, Drury Lane. The cast with Nick Bromley (right) – Photo Mark Beech 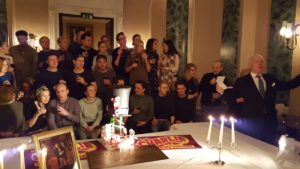 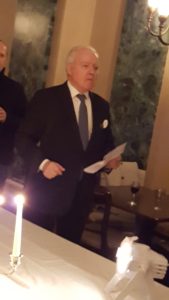 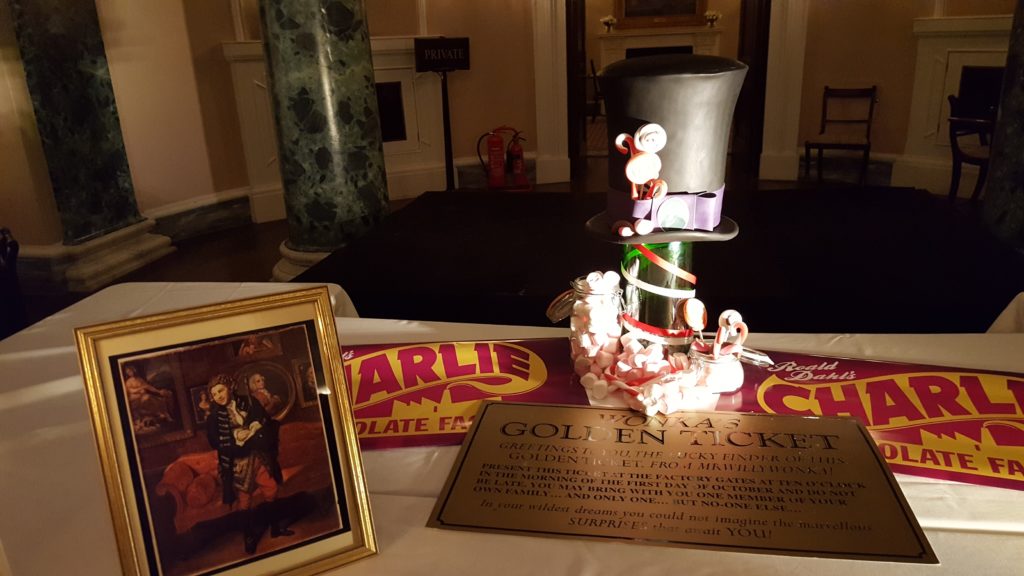