/ Art and Culture @en / Adele: The Next Stage

Adele: The Next Stage

Adele is now stadium sized. After years of resisting the larger arenas, she’s now coming to stadia near you, if she hasn’t already. She’s even throwing in an appearance at the world’s largest greenfield festival – Glastonbury.

Mark Beech, who has been reporting on Adele for months, reflects on what to expect.

As Adele started her world tour a month ago, it seemed there were more than a few fans in the audience who were a little nervous about how she would come across.

Some of the 11,000 capacity crowd at the SSE Arena in Belfast were concerned after reports that the singer suffered from stage fright and had been put off her stride by technical problems which beset her then recent performance at the Grammy awards.

As we waited for the opening notes, others seemed sure that their heroine’s natural ebullience would carry her through. It was clear that the evening’s 18-song set to follow had been carefully and spectacularly choreographed. Adele’s down-to-earth character indeed carried the day. 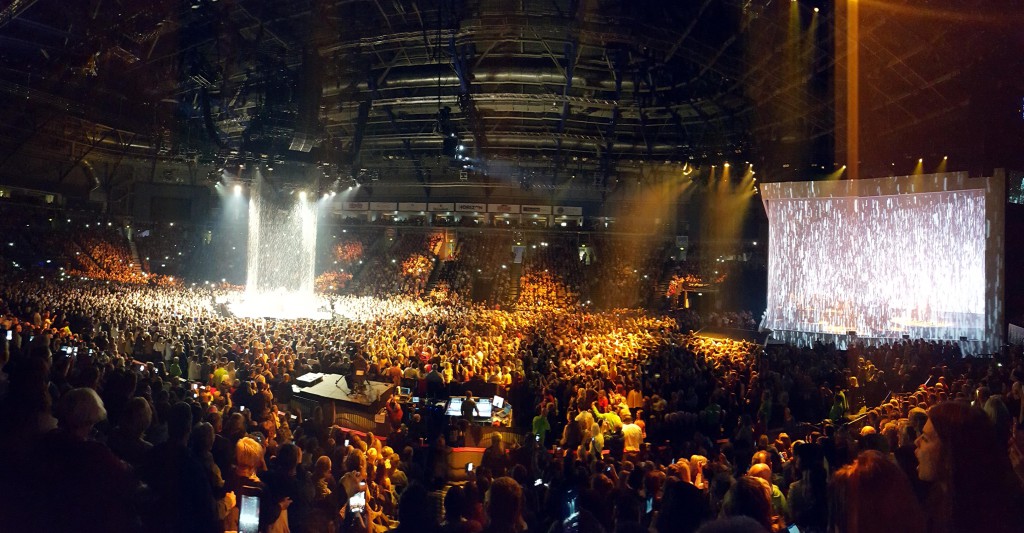 I was there to write for international news organisations: there was worldwide appetite for news on the first of some 104 shows. I’m not a fan, as it were, in the sense of one of the Adele faithful, but I’m an admirer of some of her work and have been one of the more positive critics in its support. In Belfast, I was however happily surrounded by true Adele fans and it is easy to agree that criticism looks otiose when some of these admirers came away in ecstasy, not too strong a word, especially after a rousing close with “Rolling in the Deep,” where confetti showered onto the audience with tiny fragments of her lyrics. I have one my desk here now. It says “I like it in the city when two worlds collide.” Which seems kind of apt.

What we got at the debut was a template for concerts which have already been repeated across the U.K. and Ireland – including some impressive if alarmingly literal stage effects. “Skyfall” comes with a brooding cloud background which hangs over the musicians. “Set Fire to the Rain” has Adele surrounded by a shower of droplets and “When We Were Young” has a charming montage of the singer, guess what, when she was young, taken from family snaps and video footage.

If you are thinking of going to see her, you probably have your ticket already with many of the dates sold out but if you’re wondering whether to make the effort, it is clear that there are plenty of things you WON’T get. This is an Adele concert of course. That means a star who doesn’t do elaborate Beyoncé costume changes: she is in her comfortable dark dress throughout. She shimmies a little on some songs but definitely doesn’t engage in Madonna-style somersault dancing. She doesn’t do ad-libbed freak-outs or lengthy guitar fills.

One of my rocker friends asked me to report back on his question: “what do people DO at an Adele concert?” It’s a good question actually. Most people politely sang along with every word of the primarily mid-paced songs. Adele has so far sounded very on form, with an extremely strong voice which throughout 90 minutes or so is quite enough to blow the roof off venues such as London’s O2, with some bystanders joking that she hardly needs amplification to do this. Some Irish girls in front of me, fuelled by Jamesons or some such, got quite excited about the time of Chasing Pavements and Rumour Has It I recall, but after a few minutes of enthusiastic bopping they flopped back down and usual decorum was returned.

How you will feel about Adele’s fireside chats between each number is perhaps another matter. With a mug of tea, she has been recounting amusing anecdotes from her personal and professional life – everything from stories of Leonardo DiCaprio and Jennifer Garner to the cheeky behaviour of her son Angelo. Take this as it may, she won sympathy in the first outing by setting out a series of mishaps before she took to the stage – problems with hotel air-conditioning wrecking her voice and sickness which left her almost unable to perform. She has also got away with somewhat staged audience interaction – in that first concert for example trying to get a guy to agree to marry his partner who she dragged on stage.

The ceremonies will inevitably start with a huge projection of Adele’s closed eyes in a video loop, slightly quivering before they suddenly open for the first number “Hello” amid a huge roar from the crowd. When the stadium space allows, Adele will appear mid audience on a small central podium and move to the front. 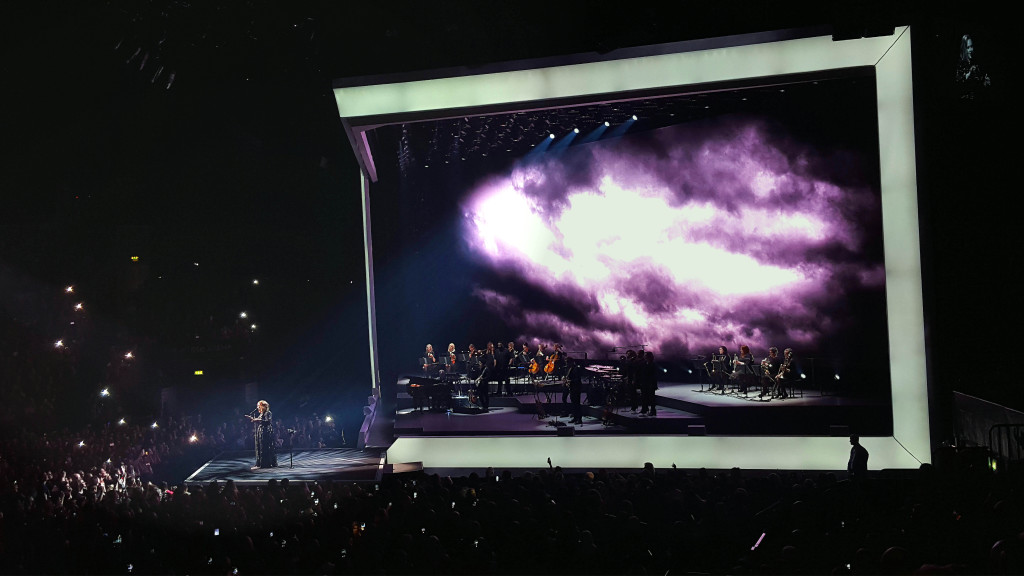 I’ve been writing about Adele quite some time. There are a number of other critics whose nature is to be reluctant to be especially praiseworthy about any music which is patently commercial. I don’t care about that: if it’s good music, it’s good music. I am actually more inclined to mark up something that will sell rather than cynically knock it down. When 21 came out, it was obviously a strong album and I gave it top rating, writing for Bloomberg News. There seems to be a conspiracy of calculated coolness among some other writers who will only give top marks to the obscure or difficult, which this and the successor album 25 clearly are not.

In the month since the Belfast concert, Adele has been continuing to rack up record sales. Music analysts told me that revenue from the events could exceed $150 million, while 25 has already sold more than 20 million copies.

Shortly after the tour started, speculation grew that Adele was set to announce that she was to headline the middle night of the Glastonbury weekend. This looked even more likely when the organisers said that the headliners would be British, and of course it was obvious that Adele did not have any other concerts at that time. Industry sources told me that Glasto slot was hers if she wanted it, and so it proved to be the case with Adele confirming it during one of her London O2 gigs. 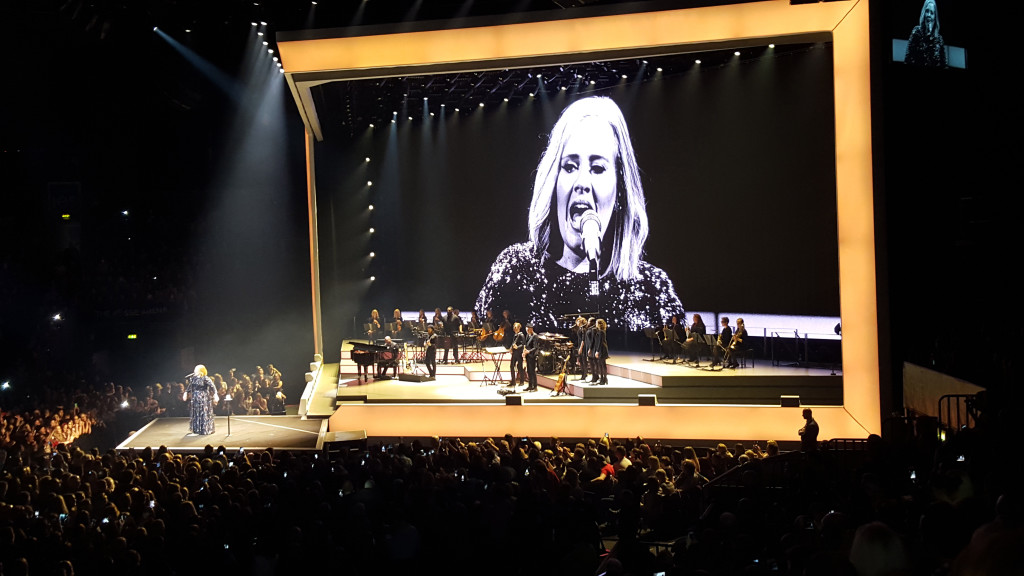 While she should win over the generally welcoming Glasto crowd, the hostile would argue that Adele makes music for people who don’t know much about music and almost certainly don’t like rock, the exact opposite of a Glasto festival goer. Anyway, I’ve got to say this nasty view is somewhat unfair. Particularly in a place like Northern Ireland, it seemed to me that music is a broad church and there is always room for a medium-to-large venue like the SSE Arena to stage everything from heavy metal to someone like Adele. Actually, let me rephrase that, because there is nobody quite like Adele. When she sings “Someone Like You,” she makes the point very well. Love her or not, it’s hard to deny that she has made some people very happy and has been a bit of a saviour for the record industry and physical CDs at a time of turmoil, illegal downloads and digital conspiracy. Go girl, we need you.