/ Art and Culture @en / Goodwill to all? DANTE recommends a play that speaks volumes about life’s evils – and how to avoid them

Goodwill to all? DANTE recommends a play that speaks volumes about life’s evils – and how to avoid them

A holiday time of “goodwill to all men and women” seems exactly the wrong moment to focus on the nasty things in life.

In fact, the timing has never been better.

Because DANTE strongly recommends a new work that says a lot about life’s evils – and how to avoid them.

This is a play called “Bull.” This title refers to bullying. It is impossible to ignore the idea of bullfights. And the bullshit of brutal relationships.

In other words, it takes on universal subjects that are often kept well hidden. “Bull” is likely to have resonance to anyone who has experienced in school-playground taunts or workplace bitterness– the unfairness of being picked on just because you aren’t one of the cool kids; the nastiness because your face doesn’t fit. I’ve seen this so many times, and it is inexcusable that big international companies tolerate it.

Even with schools and offices closed for the festive season, the play has something to say, perhaps also to those who have suffered domestic attacks and abuse. And even if you are not in London, where this drama is currently performing at the Young Vic, read on, because there is much to learn. 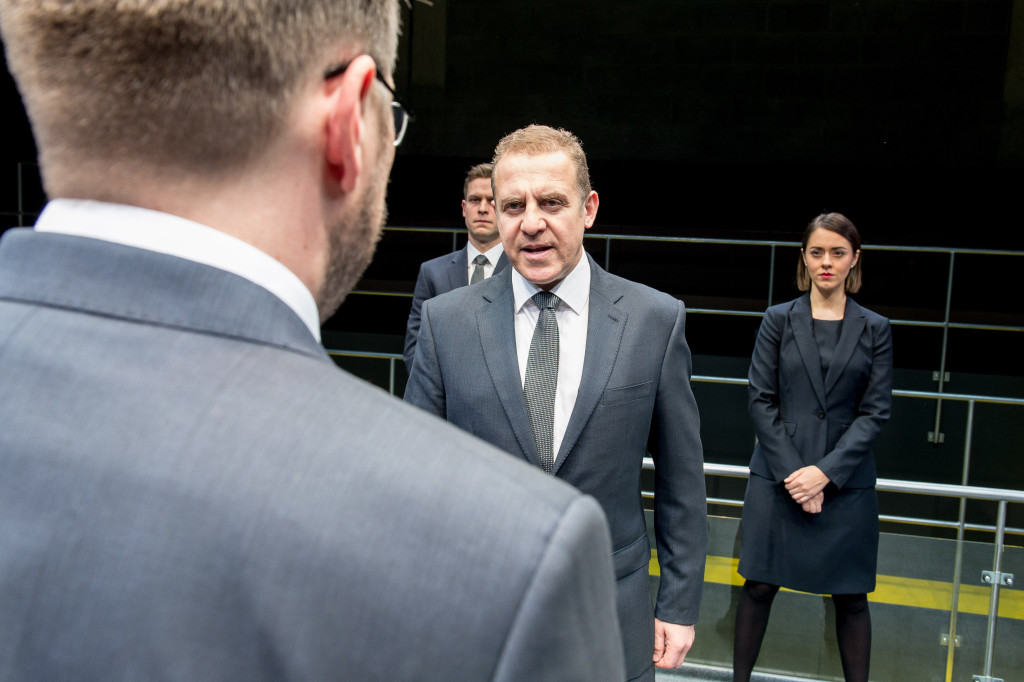 Plays can be instructive. “Bull,” by Mike Bartlett, can also perhaps unintentionally function as a one-hour instruction course in what not to do. It offers plenty of warning signs on how to spot the bully before it is too late. It is also oddly compelling, like watching a car crash coming at you but you can’t avoid it.

One of the nice details is that the company being depicted in “Bull”, an appallingly dull place full of management mumbo-jumbo, keeps its identity well hidden. Could it be banking, finance, a call centre, management consultancy, or advertising sales? It has been hit by recession anyway and all departments have been warned that they are losing staff. We are watching three workers who know one of them is facing certain redundancy in the “downsizing.”

How do they react? In this case, two of them gang up to ruthlessly torment the third. At first it is amusing, with harmless enough jests about his cheap suit. The audience smirks along at the jokes. The victim is called Thomas – a common enough, innocuous name, you might think, but even this is mocked: “Doubting Thomas.” Thomas (Marc Wootton) isn’t so fit as his colleagues and he starts looking hassled.

This offers lesson one for victims: be prepared to walk away and challenge when something is wrong. If something feels wrong, it quite probably is. Thomas sticks in there, out of misguided loyalty or hope, and gets goaded more.

Then the play turns, gets nastier, more personal. There is endless sarcasm about Thomas’s stature, his hometown (Ringwood), his father (a maths teacher), his dislike of drinking, lack of obvious ambition or a decent social life, any kind of sex life. By now the tension is real. There are gasps from the audience.

Thomas’s colleagues constantly cajole him, saying it is all light-hearted or well-meaning and their personal attacks are nothing personal. But they are. Thomas later declares “they just don’t like me; this is nothing to do with business.”

Lesson two: Don’t just take it lying down, don’t just take it on the chin. Don’t get mad, get even. The unrelenting recrimination should be the cue for him to do something. Instead, Thomas rises to the bait and then starts lashing our verbally. If the company wants someone out, it will get them out and find any excuse to do so. The slightest mistake that would be passed over if made by others in better standing will be seized upon and written up in a dossier of failure.

Lesson three: Fight back – but in the right way. By the end Thomas is like a bull in a bullring, snorting with rage and frustration at every taunt, lashing out with his fists too.

Lesson four: Keep a clear head and keep a clear record. One wishes that Thomas had recorded his colleagues’ comments, with some being as incriminating as they get. At one point, when he threatens whistle-blowing on the bullying, Thomas is told he’s unlikely to win, but if he did succeed, his professional life would be made impossible for him.

“Bull” has a lot to pack into a short time and so ratchets up the tension. It makes for a satisfying dramatic confrontation – and that is reason enough – if a little non-naturalistic. Could two people really be so vile? There isn’t much room for subtlety. The characters are very firmly delineated. If each has hints of human niceness these are only flashes. The team leader Tony (Max Bennett) is an appalling specimen: an alpha male who runs marathons just to sleep with the charity workers involved. He taunts the others into caressing his six-pack body – a brilliant storyline and exactly the sort of thing we might expect in the most juvenile of playgrounds. 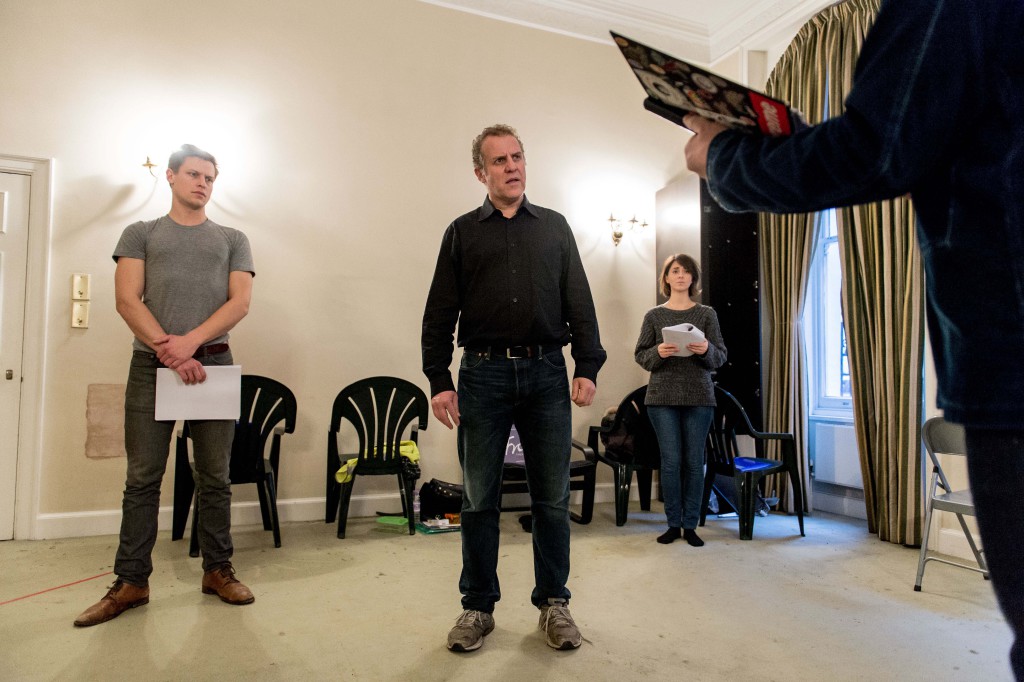 Isobel is also difficult to play sympathetically and Susannah Fielding does well. Isobel variously flirts and then has little hesitation in saying she is being sexually harassed and was abused as a child. Is she a feminist/sexist nightmare or a victim herself? It’s all a little problematic in that Thomas is disbelieving of most of his fellow-workers’ backstories – Tony’s claims of penthouse apartment, model girlfriend, Porsche given as a present and pilot’s licence look extremely farfetched when put together. Isobel also gets to be a little caricatured in her ambition and allegations of sexism. She has a love-hate relationship with Tony (she’s more than happy to put her head on his “brick shithouse” torso) and she later confesses to some underhand spying on Thomas and his former partner. While she isn’t impressed by Thomas’s comments that she is a bitch from hell, it’s hard to disagree with him. It is also difficult to feel sympathy with such a scheming manipulator, whatever awfulness she may or may not have endured in her past.

The Boss, Carter, is a hard and unflinching management machine. Nigel Lindsay plays him with a convincing hint of humanity amid the stream of corporate speak – he takes a swig from a hipflask to give himself some ‘Dutch courage’ before the firing. All of the characters are recognisable stereotypes. Play-goers may be asking themselves what elements of which reflect back in themselves.

The staging in the Young Vic’s Maria studio helps, with the audience on all sides sitting or standing close enough to touch the actors. The lights are kept on, making it impossible to miss the horrified expressions of other onlookers.

The event starts with blaring rock music – Queen’s “We Will Rock You” and arena noises. The stage, with metal bars, resembles a ring for boxing or wrestling, containing an anonymous office, with a blameless carpet and inevitable water cooler (which has a part in the show-stopping conclusion, not to give too much away).

You are likely to be moved by his play even without if you didn’t know it was won Olivier and UK Theatre awards from its earlier showings; that its assured direction is by Clare Lizzimore; and that the playwright is known for works such as “My Child,” the “Bull” companion piece “Cock,” the BBC’s “Doctor Foster” and of course “King Charles III.” 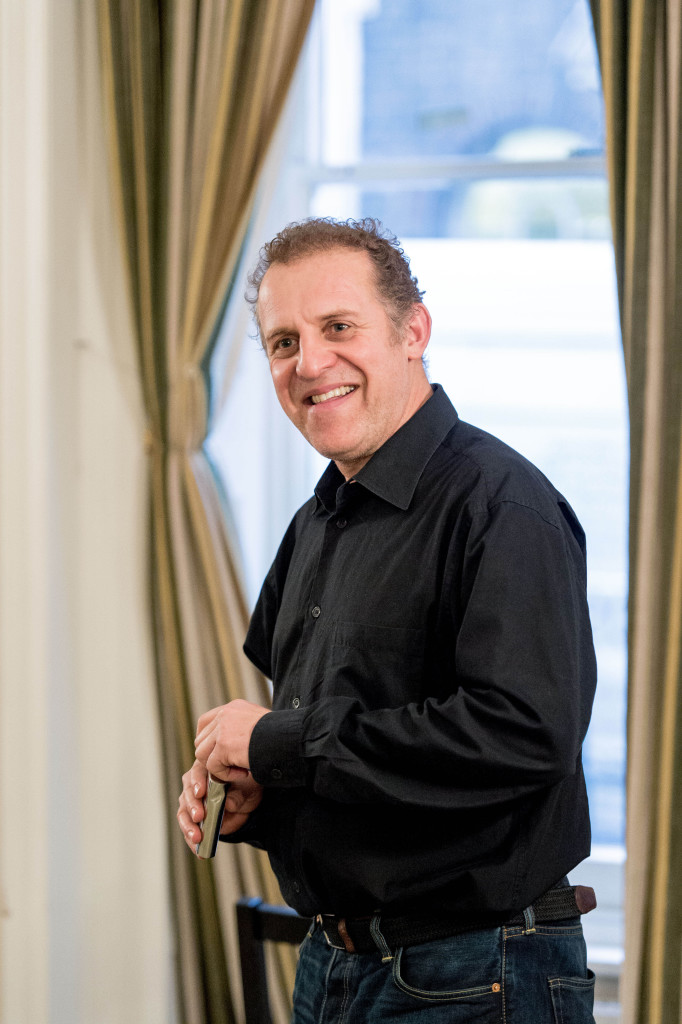 When I recently interviewed Nigel Lindsay, he agreed this play is a contrast to the many feel-good shows doing the rounds over the holiday season. (Just up the road from this event, the Old Vic is doing Dr Seuss’s “Lorax”). Lindsay urged all Grinches to see it. So would I. This isn’t an easy hour but it is gripping and you know might learn from it. What to do if faced with taunting. What not to do. Warning signs that your sarcasm is becoming cutting and hurtful.

You can learn a lot about corporate survival by watching episodes of TV’s “The Apprentice.” (Which by the way “Bull” directly references at one point.) You can probably learn a lot more, and a lot quicker, with a single visit to “Bull.” Oh, and yes – it is very funny. In a scary kind of way.