Montse Frisach  journalist and art critic for the Catalan newspaper “El Punt Avui“ in Barcelona reviews for Dantemag the work of Catalunia painter Alex de Fluvià and finds how he has used his travels around the world to imbue his work – with very exciting results.

Àlex de Fluvià has a career spanning 25 years and a distinct style where the spirit of his homeland Catalonia, and the heritage of his predecesors are everywhere felt. His paintings are reminiscent of the poetry and colour of Joan Miró, the flow of Antoni Gaudí’s Trencadis, and the matter art of Antoni Tàpies. 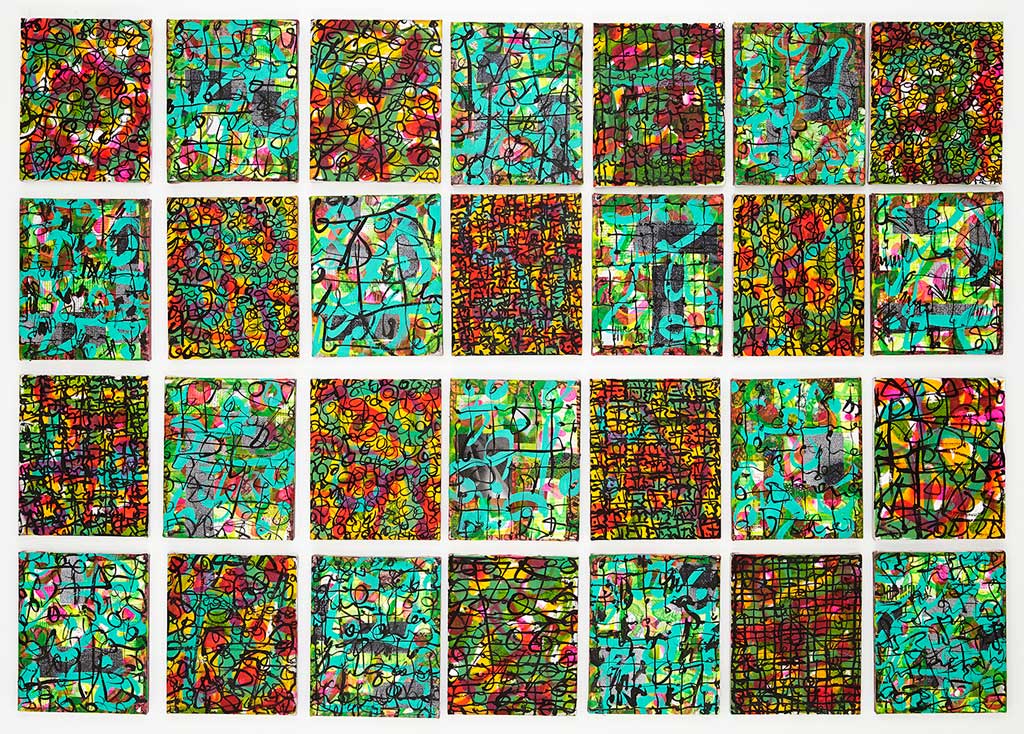 De Fluvià was inclined towards art from early on. A set of drums and a box of colour paintings were among his most prized possessions as a child. He would spend hours on end, drawing or copying images from books in his family home in Barcelona. As a teen during the 80s, he studied jazz, played the guitar and was part of several rock bands. He admired the Rolling Stones, David Bowie and  Lou Reed. During this period, he also spent time drawing graffiti in the streets of Barcelona by himself and this art form would play a significant role later in his works. 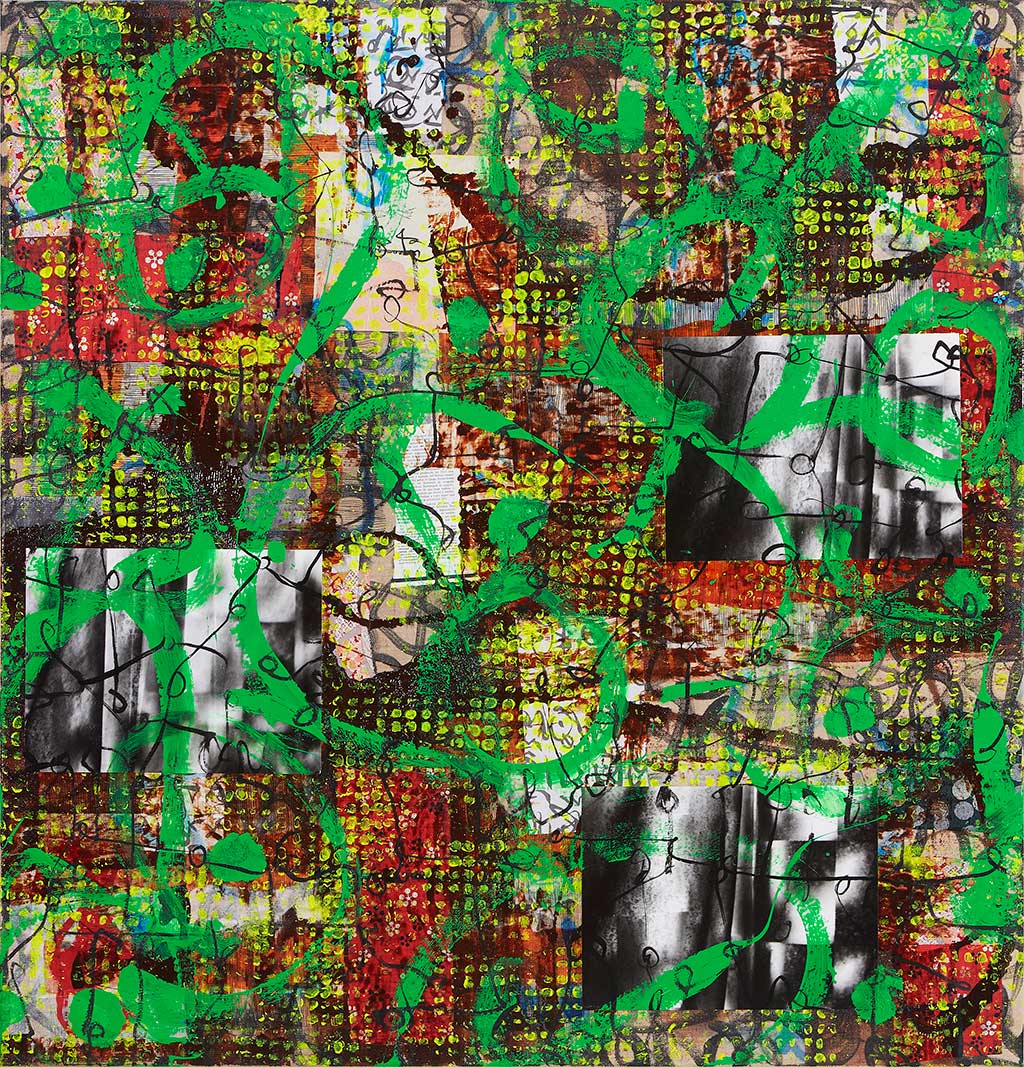 As a young man, he decided to go to Barcelona University and study History of Art. On a trip to Madrid in 1987, he saw an exhibition of Rothko’s works and was perplexed. These paintings by Rothko were showing in Spain for the first time, and the grounds of colour the American artist used had a deep impact on De Fluvià. It was to be an epiphany for him, and he decided there and then he wanted to become a painter.

A couple of years later, he had already been painting and approached the gallerist Miquel Gaspar (who belongs to a prestigious line of gallerists in Barcelona who represented Picasso and Miró during Franco`s dictatorship). The gallerist gave him his first opportunity and offered him a show. At this time, New Expressionism was in vogue and De Fluvià was exposed to the German Expressionists and Italian Transvanguard. Meanwhile in Spain, the up-and-coming painter Miquel Barceló was becoming famous for his expressionist and figurative works.

By 1996, De Fluvià decided to move to New York to further his studies and career. This period was crucial in his formative years as a painter. He went to the School of Visual Arts to study photography and began experimenting with abstraction. In his Williamsburg studio, he created large scale paintings for the first time and incorporated photography as part of his iconography. He showed his works at Jan Abrams Fine Arts Gallery. 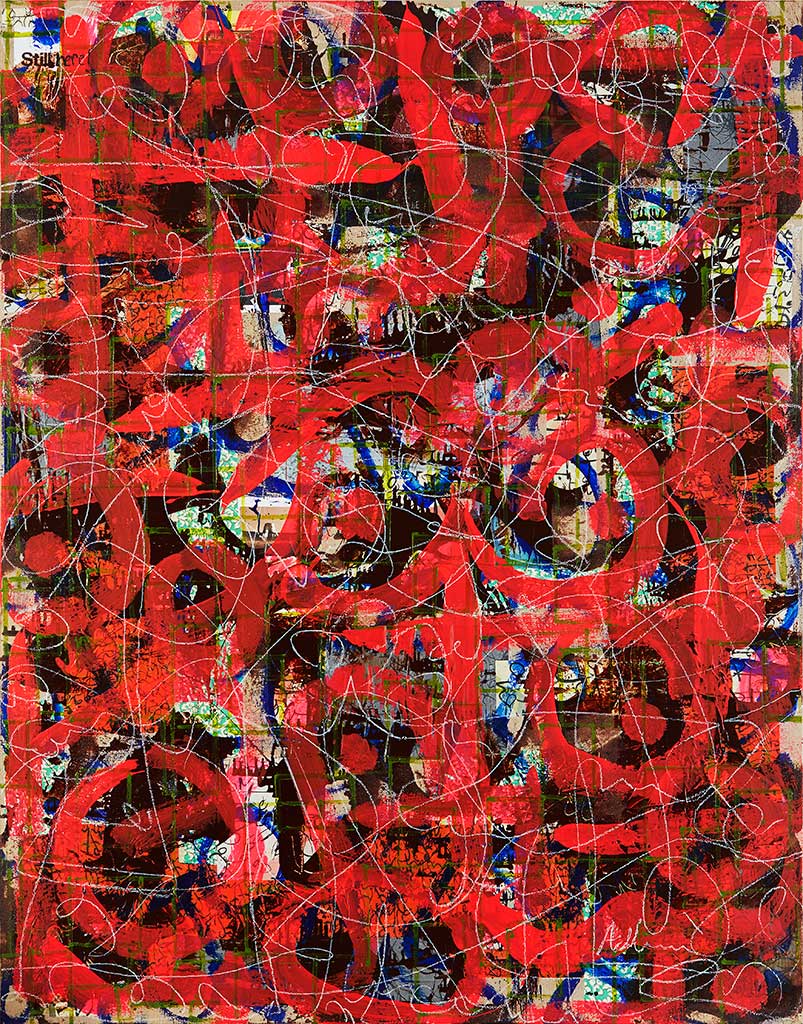 In 2001, he returned to Barcelona and showed his paintings at well-known local galleries like Trama (2002) or Metropolitana (2004). Soon after, his nomadic spirit led him on various travels to Latin  America and later on to Cairo where he settled for a year. De Fluvià was always drawn to the Mediterranean and ancient cultures and during his time there, he explored old scriptures, the Arabesque and the Mashrabias of North Africa.

After this chapter of his life in Egypt, he spent time in Japan studying calligraphy. During this period he produced drawings and paintings shown in Barcelona, under the title of ‘Translation’ at Casa Asia Foundation and Fidel Balaguer gallery in 2006.

De Fluvià has continued expanding his international career since 2008, when
he was offered representation in Dubai by Cuadro Fine Art Gallery. He moved there in 2010 as artist in residence and produced works for a solo show. His works have also been shown at the Art Abu Dhabi fair, which gained him a wide exposure and a roster of collectors within the Gulf region. 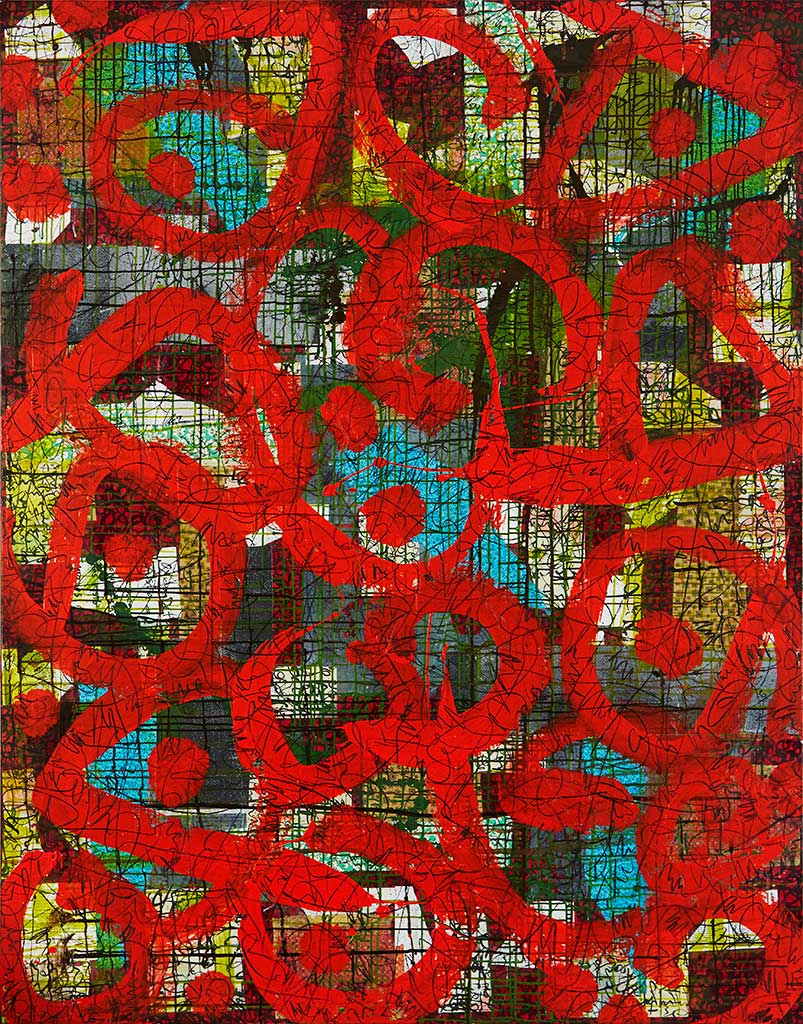 In 2013 he took part in the Pinta London art fair with Galería Balaguer and had  two solo shows in Dubai and Barcelona respectively.

The work of Alex De Fluvià  is deeply rooted in his commitment to painting as an art form. In a fast-paced era in which technology  reigns, Fluvià prefers producing his paintings in his studio allowing them to come to life naturally, as if they were cooking over a low fire.

His canvases, colourful and vital, are not what they appear to be at a first glance. In the density of their surface, graffiti-like writing and energetic brushstrokes  are intertwined upon a baroque background filled with details and fragments, giving way to a complex cosmos where there is no room left for empty space.
However, looking past this initial surface and visual impact, each painting seems to open itself up, unveiling deeper strata. Suddenly, one discovers super-imposed gestures, calligraphy, fragmented photos, scraps of paper – a rich and complex collage constructed among underlying fields of colour.
This multi-dimensional collage represents a question that De Fluvià asks of the viewer. He is challenging us to discover what lies behind. A summons to see, just as in life, how the superficial and the profound complement one another.

“Oracle”, his most recent exhibition in Barcelona, is, in his own words, “… a vindication of sorts… an attempt to assert painting as a relevant medium of expression.  In a world overflowing with information, painting can still say many things and address complex issues in our society. It is humble, and essential. It is still capable of speaking to us in the same way it has been doing so, since time immemorial.”
Tr. Jimena Flores