What is art? What is a work of art without a viewer? What is the relationship of the viewer to the work? To the artist? François Ozon’s film “Dans la Maison” (In the House) weaves some compelling and unsettling answers to these questions. A review by Ezster Gafalvi

A struggling gallery displays a series of blank canvases accompanied by recordings of the artist describing the colours and patterns that ought to be on them, while the originals, on which the descriptions are based, have been destroyed. All the viewer is left with is the recording and his imagination. The moment, barely a punctuation mark in the film In the House (Dans la Maison), ties into one of its central themes: is this art? What is a work of art without the viewer? By applying our individual codes to our perception of a piece, we invariably play a part in “creating” the work; by being a part of a transaction, we are complicit in its creation. 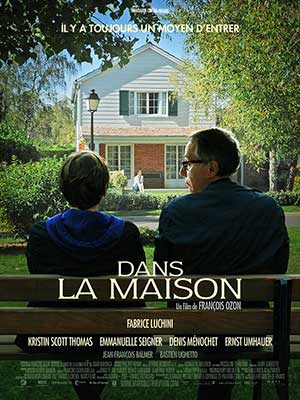 And so it is that our two main characters make their art together. Claude (Ernst Umhauer), a teenage boy, impresses his schoolteacher, Germain (Fabrice Luchini), with a piece of prose detailing his weekend spent insinuating himself into a family about which he has long been curious. His writing is mature, unexpected, and daring, piquing the teacher’s interest. They enter into a strange bildung relationship; the boy writes while the teacher corrects, guides, and reads with increasing interest, forgetting propriety, ethics, and even his wife (Kristin Scott Thomas) in the process. The gifted student effortlessly manipulates both the family and his embittered, talentless teacher. While ostensibly, the art is in the brief episodes of Claude’s prose (and the poetic cadence of the words certainly create the illusion of this), in reality it is the way in which Claude makes Germain and even Germain’s wife complicit in his voyeuristic occupation that is his creation. The lines between reality and fiction blur and distort, until neither we nor the characters can tell truth from invention. 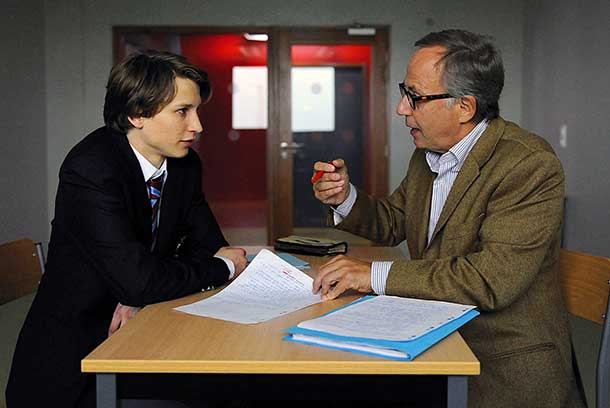 Adapted from a play by Juan Mayorga, The Boy in the Back Row, this film is layered and exquisitely subtle, with a psychological complexity rarely found in cinema (and even more rarely in Hollywood). We are given clues to Germain’s Hegelian allegiances early in the film, and to a morality which crumbles in the face of temptation. His vicarious desire to live out his own ambitions through his student elicits both contempt and pity for a man who is intelligent enough to realise his own mediocrity. Claude remains a tantalising enigma throughout. The impression he leaves is of a fully-grown sociopath of quite a different – and more frighteningly subtle – order to Kevin or the Columbine killers. Yet Umhauer injects flashes of vulnerability into Claude’s otherwise flawless poise, as the teenager becomes, almost against his will, more and more drawn to Esther (Emmanuelle Seigner), the mother of the famille normale. We are left disturbed by his detachment and calculation, but still feel sympathy with this lonely child-virtuoso. Kristin Scott Thomas slides effortlessly into the role of Germain’s curator wife, lonely and stressed by a gallery about to be axed by its two ignorant owners. 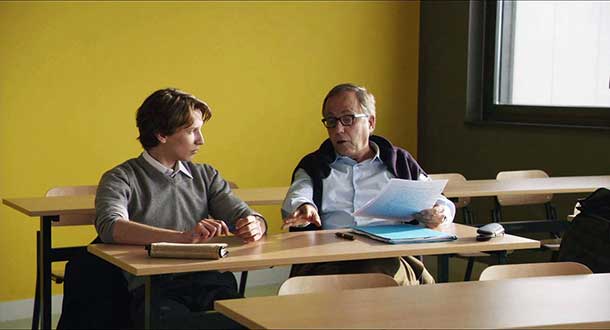 The camerawork is understated, pitched largely to highlight the performances, but with a few (sometimes a shade too obvious) gestures to emphasise the voyeurism of the characters – and indeed our own: the camera following the eye of the viewer; a shot from around a corner; a nod to the cinema audience via a shot of the projector. In general, however, the style is neutral, allowing us to get on with our fascination with the characters. As in many European films, the colours are less vibrant than the high-colour warmth of Hollywood films. We find a brief moment of brilliant technicolour only once during a Claudian fantasy of Esther. The music is not overpowering or manipulative, and is judiciously applied. The rich, string-centric themes are firmly established during the opening credits and recur as the story unfolds. The forward momentum of the music carries the plot inexorably, as if on rails, to an unknown but perfect ending. The story extends perhaps a shade too long in the latter half, and Germain makes a few appearances as a third party apparition in some of Claude’s final writing sequences in a not-quite-successful variation on the voyeur theme. But these minor stylistic gripes are more than redeemed by the intensity and beautiful symmetry of the conclusion. 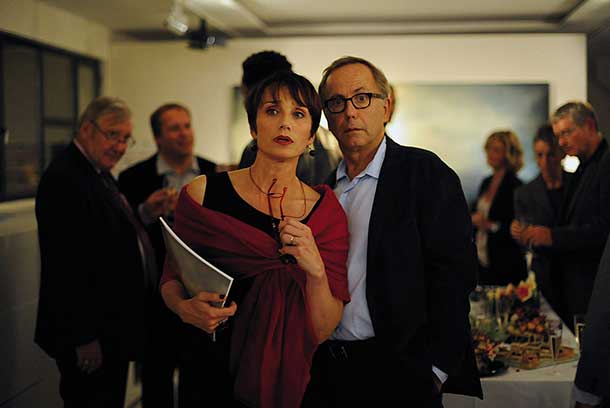 The film’s complexity does not rely on plot (indeed, on paper the plot is rather simple) but on relationships between people and their roles, the tensions between old and new. Who exploits whom? Who watches whom? Who is weak, who is strong? One cannot help but feel as though (to borrow a trick from the Hungarians) director François Ozon has followed one through a revolving door and come out first. We might view this film as a new expression of a very old story: the destruction of the old and the succession of the new. Germain’s old-fashioned moralism goes hand-in-hand with a set of modernist aesthetic values, but his time is over, while Claude, the newer model, is not tied down to pre-established laws. We may award the jaded crown of the postmodern to his hyper-aware, ironic presence. 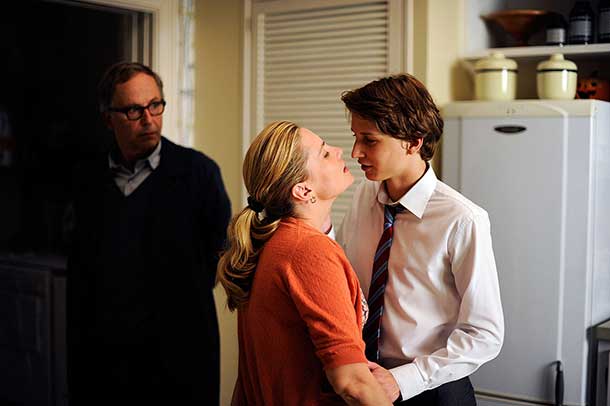 “You don’t love me, you love an image,” says Esther to Claude. Debord would approve of the commentary. Ozon makes an important point about cinema: like our two protagonists, we consume the lives of others, even if they are only fictional. The function of cinema is frequently escapism. In a sense, it is a parasitic relationship. We live through the television screen to escape the mediocrity of the real, just as Germain escapes through Claude, just as Claude seeks to escape through la famille normale. Ironically, this film prohibits the very escapism that is frequently sought by the modern audience. Ozon’s sharp-edged execution of an insightful, highly relevant story dishes out too much food for thought to allow an escape. As such, it is well worth, perhaps even requires, a second viewing.