Once used in film music and then almost forgotten, the theremin has been experiencing a revival in the last few years. It is a “Golden Age” for German-born musician and composer Carolina Eyck, 25, who is one of the foremost theremin players in the world.

Carolina Eyck looks focused, her curly hair tucked behind her ears, her black dress shimmering in the stage spotlight. She is standing in front of a wooden box with a metal antenna on each side, one bent, the other one upright. When Carolina begins to move her arms towards the antennae, an eerie sound can be heard, slightly reminiscent of a woman’s singing voice. It is a magic moment. Carolina is playing a melody without touching anything. The tones seem to come right from the air.

The odd-looking box with the two antennas is a theremin. It is one of the first electronic instruments, invented in 1919 by Russian physicist Leon Theremin. Briefly, the theremin works as follows: the metal antennae create an electromagnetic field (though called antennae, they do not actually broadcast anything). The musician forms a capacitor between his/her hands and the antennas whose capacitance varies by the distance between the player’s hands and the instrument. The closer the musician’s hand is to the upright antenna, the higher the pitch. Volume is controlled by the loop antenna. 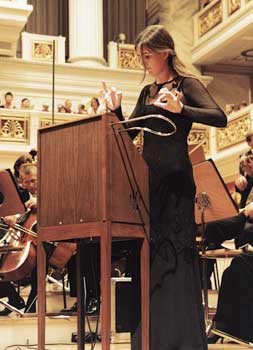 It is hardly surprising that early film music composers got to love the mysterious sound of the theremin, which was introduced commercially in the US in 1929. In Hitchcock’s “Spellbound”, for instance, composer Miklós Rózsa uses one to describe the protagonist’s fear and psychological crisis. However, the hype did not last for long. After an initial flurry of interest, Leon Theremin’s revolutionary invention was barely played and rather forgotten. It is only in the last few years that the theremin has experienced unexpected revival, mainly in modern classical music. Eyck explains the new resurgence of interest in her chosen instrument: “Composers are always searching for something new, something people don’t know yet, so the theremin is an ideal instrument for them. As it is played without being touched, it’s also something extraordinary to see, not only to listen to.” 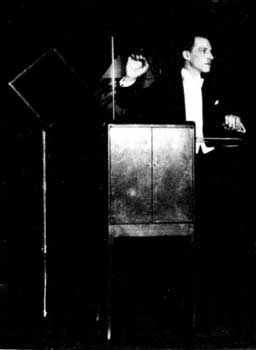 Leon Theremin
1919 inventor of the theremin

Carolina’s full schedule demonstrates the recent demand for theremin virtuosi all over the world. Only last year, she took part in several world premieres. Whether in Turkey, in Finland, in the United States or in Japan, the situation after the concert is always the same: people come up to the stage and want to try out the theremin themselves. “The good thing is that you don’t have to touch it to play, so people can’t break it”, Carolina laughs. “I’m not really sure if I like the sound when people try it out, because when you don’t know how to play, it’s just whimpering. But as long as people love it, I let them do it. That shouldn’t be a call, though!” 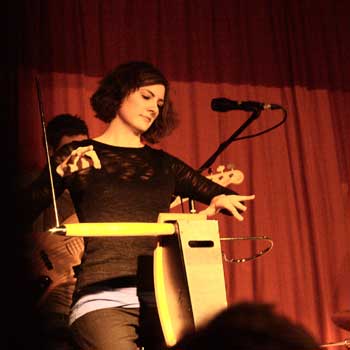 When Carolina tried the instrument for the first time herself, she was seven years old. Her father made electronic music and arranged for Carolina to study with Lydia Kavina, one of the greatest players in the world. At the age of twelve, Carolina made her debut with the Berlin Philharmonic and was soon invited to concerts and festivals worldwide. She is glad of the chance to travel and to explain how her instrument works. Nevertheless, she also sees a critical aspect about these invitations: “As a thereminist, you could sometimes get the impression that tour operators just need a random theremin player and book you because of your instrument, not because they appreciate you as a musician. But recently, I feel that I’m not only perceived as an interpreter, but also a composer. On Facebook, people post on my wall: ‘Hey, awesome concert you played!’ So, in the end, it’s also about my own way of playing and about my own musical works.” 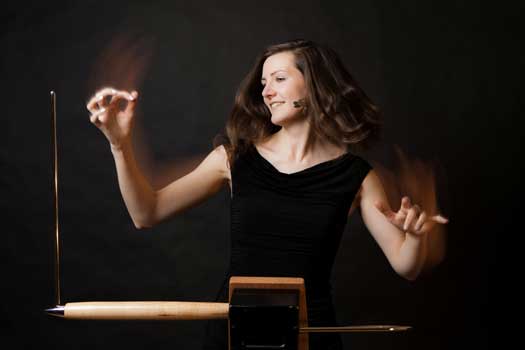 Carolina loves to improvise and try out new techniques, especially as she has grown up with a rather classical perception of the theremin sound. On her first CD she interprets mainly classical music arranged for the theremin. Since then, her style has evolved and could be described as a mix between classical music, modern music and jazz. At her home in Leipzig, Germany, she has several sound effect stations such as a loop station or a delay. “I love these effects,” she says. “You can start with a simple melody that becomes a whole orchestra!” For those who have a hard time imaging musical sound, a visual impression of Carolina’s music can be found on her walls which are covered with her own paintings. “When I make music, I think in colours, so for me, visual art and music belong together. I put my music on canvas whenever I have time between my concert tours.” 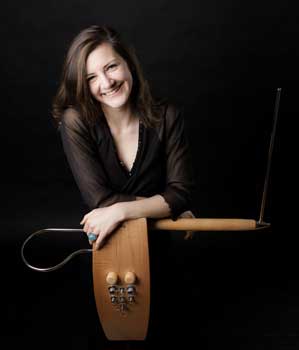 Her stays in Leipzig are also an occasion for Carolina to meet her duo partner, the jazz guitarist Vinzenz Wieg. When the two musicians play together, everything is possible. Their concert programmes primarily consist of improvisations out of the moment. “It happens that we go on stage without knowing what we will play. That’s very exciting! We also try to involve the audience, so we ask them a word and they say “sunny sky”, for example. What we do then is to imitate the feeling of a warm shining sun and the bright colours of a sky. Or I could just draw a sun in the air – and the theremin converts my movements into sound.” 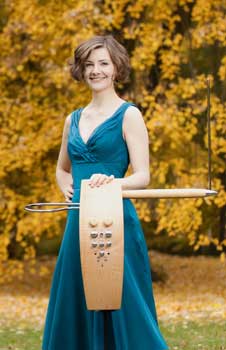 Both as a soloist and as a duo partner, it is Carolina’s aim to introduce her instrument into new styles of music. And she is not the only one. On the internet, the theremin network gets more active every day. Players exchange ideas and discuss unconventional ways of playing. Carolina is happy about the interest and responded by writing the first extensive method book, The Art of Playing the Theremin. She also gives lessons during her concert tours and founded her own theremin summer academy in Colmar, France. “The theremin is such an interesting instrument with so many possibilities we can still discover. I’m looking forward to it!”