/ Window of the soul @en / The Unlikely Abbot

Pulling back from the consumerist culture in which we’re embedded can seem like a daunting task on the best of days. But probably none of us will be called on to do such a radical unhooking as Nicholas Vreeland has done, scion of an elite family and glamorous social photographer turned Tibetan Buddhist monk – and now Abbot of a monastery in India. Perhaps our own small withdrawals from the consumer lifestyle might not be so tough to effect after all…

I first met Nicholas Vreeland in 1971 against a backdrop of glamour and extravagance in Gstaad’s Palace Hotel. At the time, if anyone had told me I would be writing an article about the man I had met that night, not for a second would I have envisaged creating the piece that you’re about to read. Perhaps, if I had been asked to venture a guess, my imagination would have taken me along a path like the one we travel when listening to “Where Do You Go To My Lovely?” It would not be difficult to imagine Nicholas Vreeland – or “Nicky,” as he’s known – the talented and charismatic social photographer, continuing his days (as the song goes) snapping photographs of the likes of such characters as the Agha Khan in such spots as St Moritz. However, as glamorous as an article of that ilk might seem, the story Nicky unravelled to me is immeasurably more fascinating and surprising. 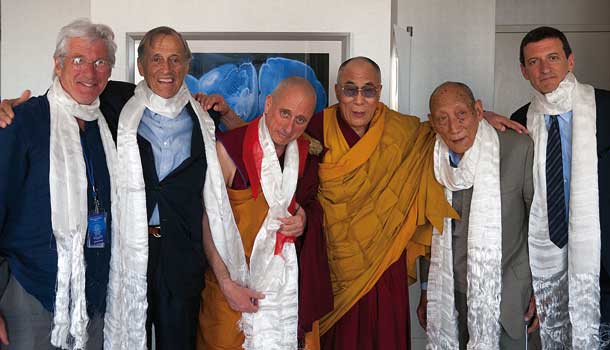 His Holiness the Dalai Lama, Khyongla Rato Rinpoche and Nicholas Vreeland after the investiture, along with his father Frederick Vreeland, his brother Alexander, and Richard Gere.

The Nicholas Vreeland who recently invited me into his home on a beautiful tree-lined street in Manhattan is now the Abbot of the Rato monastery for Tibetan Buddhist monks in India. While there are many who hold the esteemed title of Abbot, Nicky is the only Western-born Buddhist monk in the world to have been appointed to that rank. He was given the responsiblity for the Rato monastery by His Holiness, the Dalai Lama himself. 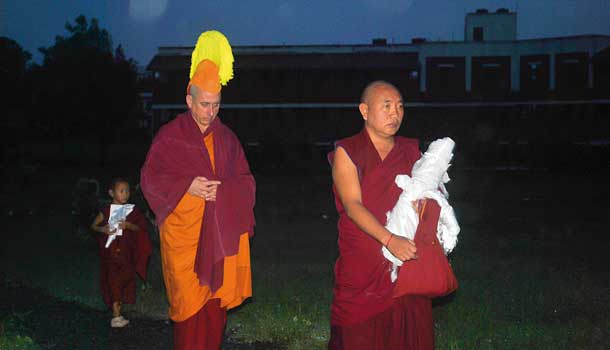 Nicky is taken to
the Abbot’s quarter

Before becoming a full-time Buddhist monk in 1985, Nicky’s life was as far from that of a simple monk as could be imagined. Son of Ambassador Frederick Vreeland and grandson of the fashion icon, Diana Vreeland, Nicky travelled the world from a young age. Born in Geneva, Switzerland, he has lived in Germany, Morocco, Italy, Paris, New York and India. He is fluent in English, Spanish, French, Italian and now Tibetan. Nicky studied at the film school at NYU and worked with Richard Avedon in his studio. His photography work took him to India where he lugged around a 5×7 Deardorff camera and recorded elegant photos of Maharajahs and Tibetan Rinpoches. As well as being the only Westerner to have been appointed to a Holy title by the Dalai Lama, he is proud to have been given the opportunity to photograph His Holiness’s portrait. Nicky studied under the tutelage of Khyongla Rato Rinpoche at the Tibet Center in New Jersey, where he still studies now. 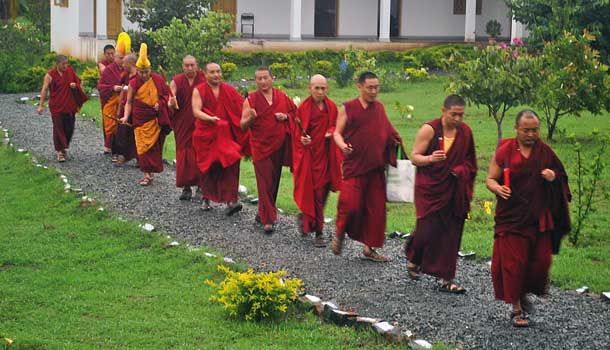 The monastery’s officials
lead Nicky to the temple

The communities of Tibetan Buddhist monks that Nicky belongs to are refugees. Their monastery is situated in a refugee settlement in India. After the Communist Chinese invasion of Tibet, a failed attempt to fight back resulted in the Dalai Lama having to flee to India. They exiled themselves with the intention of returning to Tibet. However, after it became clear that the reality of the political situation would not allow for such a return, the Indian government recognised the Tibetans had to be accommodated. Thousands of Tibetans reside throughout ten villages within four large settlements, two of them large monastic communities. Nicky splits his time between the monastery in India and his home in Manhattan. Every time he needs to travel between the two, he must raise the necessary funds to do so. As a monk, he does not hold worldly possessions. 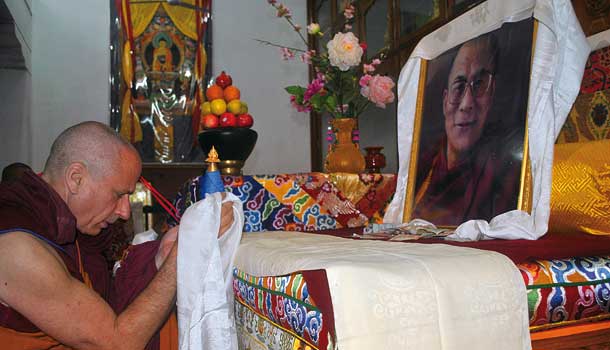 Nicky’s making offreing to
His Holiness the Dalai Lama

In 1985, when the ceremony took place, his hair was cut, he renounced his worldly possessions and goods, and he received the name Thub Ten Lhundup. From that moment, he was a full time monk. “You arrive with what you can carry so you don’t own anything,” he explains. “You get to the monastery and study. The only way they can make it in life is to study.” Although he had studied before becoming a full-time monk in India, he admitted to me that he immersed himself in the life of the monastery without knowing how to speak a word of Tibetan. He had to begin the tedious struggle of “picking up key phrases and terms and ‘fiddling’ with them in order to learn the language” with only a few weeks to do so before he had to begin debating with the other monks. 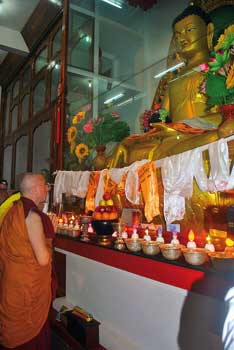 Upon having made three prostrations
before the image of the Buddha,
Nicky prays

“You change your clothes, you change your attitude, but you don’t lose your identity.” Nicky assures me. “I’m still Nicky Vreeland.” The robes Nicky wears, he wears every day. There is no day for “civilian clothes.” He tells how important the robes are to the identity of a monk. Not only do they remind other people of who a monk is, but they remind the monk as well. For Nicky, the robes reinforce his identity as a monk and remind him who he is. It is fascinating to hold these two visions of him in my mind. The two lives do not have to be separate. Nicky Vreeland has transformed into the Abbot Thub Ten Lhundup; the two identities are not separate entities. But I still had to ask him, “Can you maintain your talent as a photographer – that intrinsic calling within you – in the life you lead today? Or must it be put to one side?” 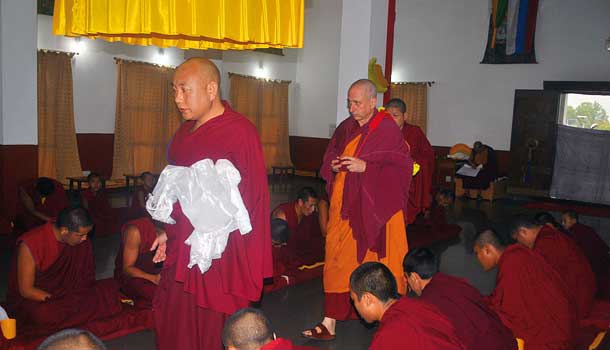 Having made prostrations at the door
of the temple, Nicky walks down a
central row of monks

Nicky responded:
“In our western culture the artist wishes to express himself or herself. To express oneself one has to go beyond a sense of self. As long as you are self-conscious in the process of creating, you aren’t going to give yourself to the process of creating. The ego will still be predominant. You have to immerse yourself in the process and go beyond that ego feeling. The spiritual process is one of going beyond the ego. As long as you have a sense of self, you are able to relate to others in respect to yourself. You are the centre of the universe. What you are working at is relinquishing that position and having others be the centre of the universe. Working towards that is probably in conflict with working to express yourself as a photographer” 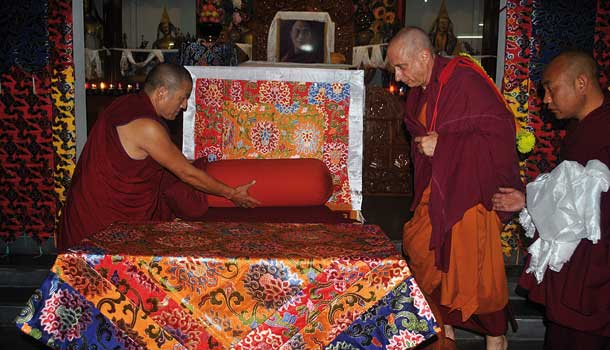 Nicky about to sit
on abbot’s throne

Although he has renounced that aspect of his life and vocation, it has still managed to become a part of the life Nicky holds in India. Of course, he doesn’t wander around the monastery snapping photos here and there. He tells me that would be somewhat inappropriate. Still the two – his life as a photographer and his life as a monk – have merged in a more organic way, leading to a rather extraordinary accomplishment.

In 2008 it was deemed necessary to build a new monastic campus for the monks. The decision was set, the contracts were signed, and the monastery was to be constructed. But, alas, it seems even the Buddhist monks were not given a clean break of luck in the credit crunch of 2008. The backers for the planned monastery all withdrew as soon as trouble in the banking world arose. Nicky and his community were left stranded until it was suggested that Nicky might hold an exhibition of his photographs to raise the money. Nicky was told to bring fifty or sixty of his pieces to Paris where twenty of them were chosen to be shown. Nicky held exhibitions in Milan, Paris, Chicago, Bombay and New Delhi where they were a great success and received a great deal of attention – enough, in fact, to fund the construction of the monastery. Nicky is now “responsible for the place.”

When I suggest that perhaps Nicky should do more exhibitions, he calms me down and reminds me that this is not his purpose any more. He reminds me that everything he does is not for him but for others, for a virtuous purpose.

“You can say that whatever you are doing is motivated by a virtuous desire,” he explains, “but you have to maintain a virtuous attitude while you are doing the thing. You have to wake up in the morning and moment by moment say that I am going to devote my day, and all that I do today, to the service of others. You have to cultivate the attitude and maintain it.” So, unless any more monasteries are in need of funding, we won’t be seeing Nicky’s work on exhibition any time soon. 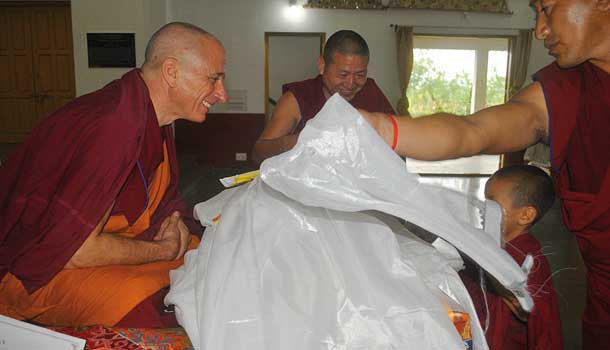 Back at the monastery, Nicky is now, as he says, “responsible for the place” and that includes the momentous task of bridging the gap between East and West. Nicky relates the words of His Holiness, The Dalai Lama, when he made Nicky the abbot:

“The monastery can run itself. You can watch over it and run it but you have to concentrate on bringing the East and West together. You were born in the West and trained in our monastic system and I think it’s important that we bring Western ideas into the monastic system. Speak up when you have something to say”. 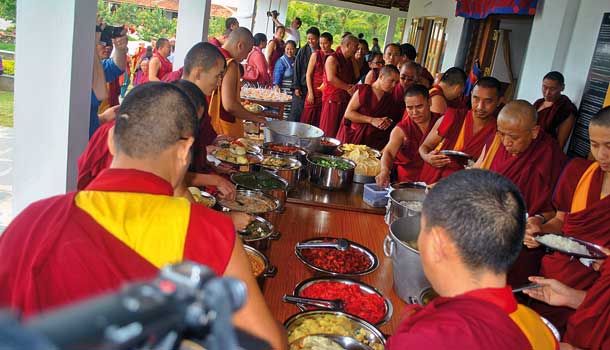 Lunch is served at the monastery

So after having spent three hours in Nicky’s company – three hours in which it felt like I had ingested a lifetime of knowledge, inspiration and wisdom – it is time I took my leave. As I stand up to go, he offers me one last string of words, glistening with wisdom. They have been wrapped around my mind since I left his home, and I leave you with them now.

“Most people we never see again. There is a reason we have bumped into each other again. All of these things happen for a reason. They are created by us and our past actions.”