/ Design @en / RE-USE ME – The Creative Spirit Of Recycling Design

RE-USE ME – The Creative Spirit Of Recycling Design

Recycling is, at its core a fundamentally creative act. It is not merely leaving used plastic in a bin by the kerb for pick-up, or shredding used paper to be dropped off and never thought of again. Creation always involves the reconception and resynthesis of the old, giving it new life. In art, fashion, and design, this spirit is beginning to take hold.

The act of reclaiming objects, with all their many different backstories, has at its root a desire to create unique objects that are original and irreplaceable guardians of past memories. It might be just a natural reaction to the on-going world economic crisis, or just simply a wish, far removed from any broader rationale, to reinvent the environment we live in with a touch of inimitable individuality, using material resources we already have but that on the surface seem to be no longer of any use to us. 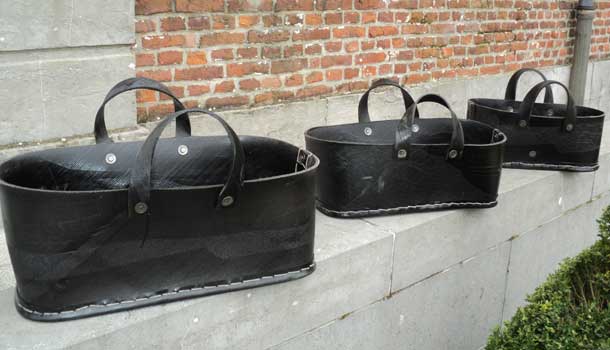 In fact, the idea of designing furniture from various kinds of waste material and of giving new life to unused objects has been slowly forming irrespective of the current crisis and has a raison-d’etre just as varied as the backstories and formative journeys of the artist-auteurs who design it. Indeed, this new trend has had a strong influence on fashion, design and art. 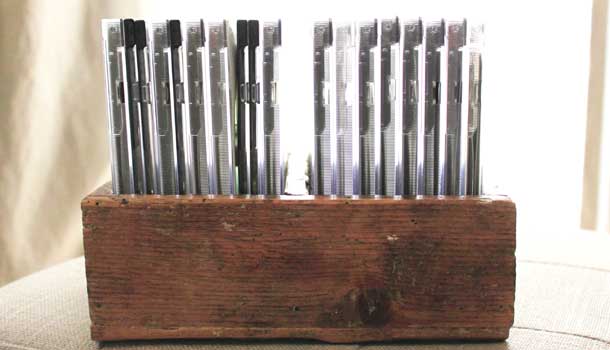 It is a search for existing materials and forms in order to give new life to objects that are no longer useful, changing their shape and the way they are used. Industrial waste, refuse, litter, dumped items, architraves, building frames, old discarded flooring, ship planks – the art of recycling can be applied to any sort of item you may happen to come across.

Doors made out of reclaimed wood

In terms of trends at the moment there are two distinct paths you can take in this process of transformation.
[arrowlist]

The trick is having the skill to see beyond the object itself in order to invent another one. That’s what the design team of Sestini and Corti, a small family business in Val di Chiana, Tuscany do (www.sestiniecorti.it) in their workshop. Forgotten objects and discarded materials are transformed into pieces of light and airy furniture, somewhere between classic and contemporary. They are unique pieces that have a backstory but still are adaptable to any kind of setting. Thus pine beams from a demolished ceiling create small pieces of bathroom furniture. Cornices and window-frames are turned into mirror and picture frames of every size. Or take your humble wooden shipping pallets. With a slight reworking, they are reborn as original items for the home or the office. Painted white, or in whatever colour you want, just attach some casters and – hey presto! – they are small coffee-tables for indoors or outdoors. Or they could, with equal ease, be made into seating with big colourful cushions on top. Then again they could turn into tables with that rustic look, resting on trestle supports that are recycled too. And why not go further and make an actual bed, using all the slats from the pallet to come up with a brilliant couch? Alternatively, you could fix it vertically to a wall to produce some original flowerpot holders. The scope for creativity in this area is limitless. 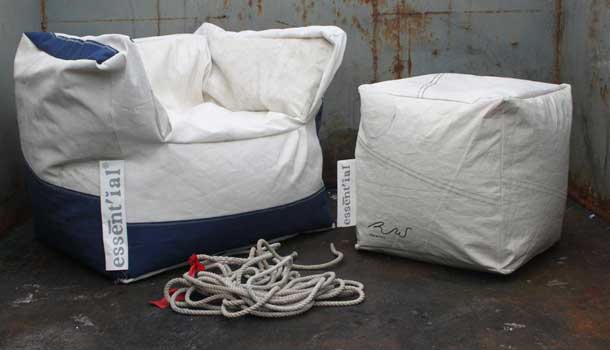 For example, Essent’ial, also of Italy, ingeniously reuses old sails to create original armchairs and padded bean-bags suitable for indoors or outdoors (www.essent-ial.com). SUSHI on the other hand is a reversible pouffe and is the brilliant idea of Eva Gorgacova, a young Slovak designer working for Recyclaid. The pouffe is original and very comfortable. It’s made from recycled jeans twisted into a shape which recalls, appropriately enough, a sushi roll. Depending on the different designs, it takes between twenty or forty pairs of jeans to create a pouffe. Recyclaid is a label launched in 2005 as a result of the textile recycling business’s desire to take an ethical stand tied in with sustainable development. (www.recyclaid.org) 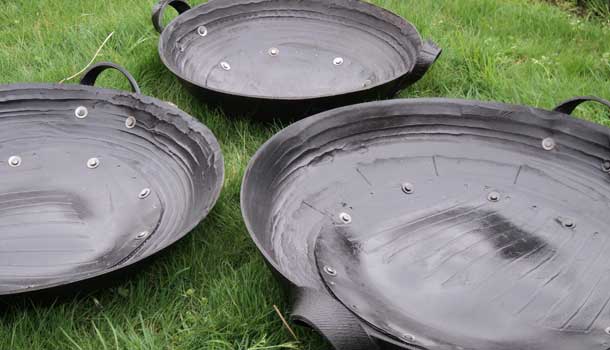 Or what to say of Belgian company Qerat that uses recycled tyres to create amazing objects. “I like this material,” said Nicholas Beck the creative owner of the company, “because it looks like black leather, and we did not have to kill an animal… The advantage of using old tyres is that they don’t break and can be used for many purposes depending on one’s own creative impulses.” The distressed tyres used in Qerat design come from Turkey and are put into storage near Aleppo in Syria. The workshop is in Damascus. It is this East-meets-West form of dialogue that inspired the unique aesthetics of the Qerat’s design objects. It is Fair Trade, and gives value to the handiwork of many men in Syria, so badly affected by current events. (http://www.qeratdesign.com) 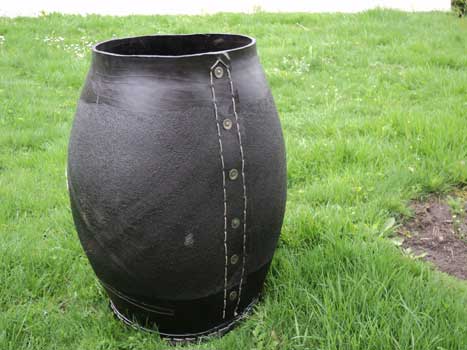 Giving a second life to any material has very strong romantic connotations, as well as being ethical. It imbues furniture and accessories with an important history. 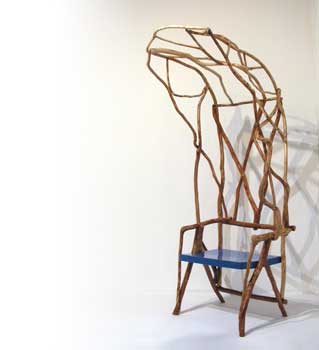 Mexican-born, London-based designer Valentina González Wohlers has entered into a beautiful collaboration with Oaxacan artisan Gabriel López creating intriguing one-off handcrafted furniture pieces that bring together the soul of Oaxacan artisans and the universe of San Jose del Pacifico in the most southern part of Mexico. The objects carry a powerful emotional value through their inherent narrative. They re-stage something forgotten, overlooked – dead wood, yet not dead at all. The pieces rescue that natural and nearly decaying product of the forest and convey it back to our consciousness through an act of reconstruction, manifested in the artisan-designer synergy. Valentina’s amazing talent lies in the fact that the pieces become, with her creativity, a multifaceted object of sculptural art as well as fully functional furniture that can be used both indoors and out. ( www.valentinagw.com)

Barrel turned into a rocking

Reclaiming an object, whether big or small, creates its own special story and I want to tell you mine. Some time ago, I went back to the old carpentry workshop of my dear old grandpa (who, alas, is no longer with us). The artefacts, the objects and tools of his trade had not been disturbed from their places for ages, but they began to “call out” and “talk” to me. So, containers worn down by time and use, the wooden boxes he used to keep his nails in, became CD or jewellery holders. The battered drawer where he kept his screwdrivers and hammers is now my magazine rack. A gnarled rung ladder has acquired a new function as a bathroom towel holder, replacing those ghastly chrome monstrosities that always come loose. Materials worn smooth and weather-beaten from continual use can take on unexpected new forms and identities.

What interests designers is the type of material and the patina obtained from age. Fixing agents are used to preserve rust, discoloration, flaking and oxidisation. The object must be able to tell its story. The material, once it is re-modelled, acquires a versatility it originally did not possess. Used furniture – vintage pieces, ancient and modern – are thus reborn. You just need to look at them with fresh eyes, setting in motion an artistic make-over, which gives added value to tables, chairs, bookcases, mirror frames, lamps and armchairs. 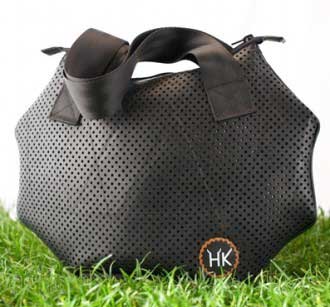 The fashion world is not immune to the new recycling trend. “If a caterpillar can turn into a butterfly, some grit can become a pearl, carbon can become a diamond or if the rotten luck of getting a puncture can produce an idea, then an inner tube can all of a sudden turn into a handbag, even a whole collection of handbags” Using this insight as a starting point, the fashion designer Marco Lai has transformed inner tubes, safety belts, old jeans into handbags and accessories (www.hellskitchen.it) Handbags, helmets and items for two-wheeled vehicles, diaries and notepads are created. His mission is the twinning of responsible consumption with environmental sustainability, without, however, compromising creativity and quality.

Reusing materials from the past while not forsaking style fundamentally constitutes the link to our urban space, reconceived and made concrete by commonly used objects that are created with discarded material most difficult to dispose of. The poorest urban materials gain new life. Every piece is unique because it carries with it the history of the thousands of kilometres it has travelled as well as the imagination of the designer who has woven together the art of the craftsman with “urbanware”. 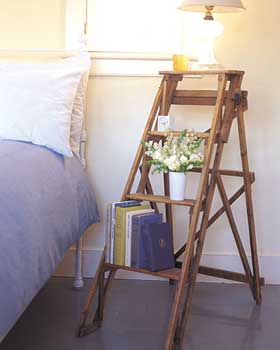 The verb “to recycle” connects the first principles of the concept of optimal use of resources and waste reduction, and has a strong ethical dynamic which encourages people to save – something which in these times of crisis can only be welcomed. Refashioning abandoned objects and looking at refuse in a new light, romantically as well as ecologically, with artistic sensitivity is a vision that can help encourage recycling and reuse, either by modifying them in an original fashion or reconfiguring them with a small perceptive touch, which transforms them into useful and original objects once again.