Renzo Piano, winner of the Pritzker Prize in 1998 puts his signature on London’s roof.

The Shard is a new jewel of twenty-first century architecture. Rumour has it that it was designed by Renzo Piano on the back of a napkin in a Berlin cafe.  It is not finished yet, but already shines and plays with the London skyline. 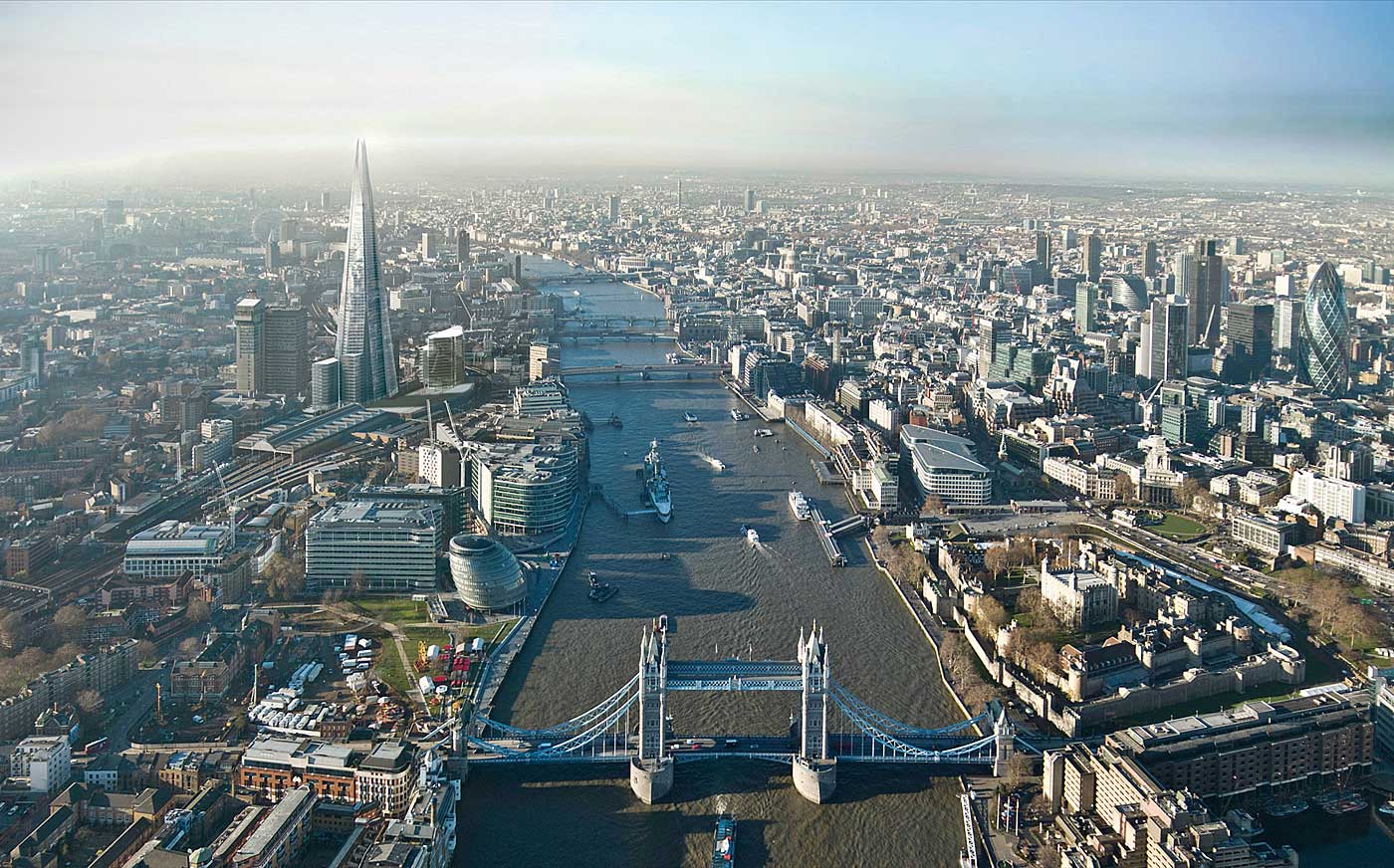 A natural antagonist of Sir Norman Foster’s masterpiece, the Swiss Re Tower, the Shard is rising in the Southwark area, around London Bridge Station. This elegant pyramid is clad in eight sheets of glass, rotating at different angles that make the building dynamic, creating a dancing transparent effect wrapped around a heart of concrete.

Inspired by the peaks of the House of Parliament, and the masts of boats moored until recently at the nearby docks on the river Thames, the Shard replaces the 1970s-era Southwark Tower.  The tower will have 72 habitable floors and will be host to the first Shangri-la Hotel in the UK with a spa, offices, restaurants and cafes, luxury apartments and public terraces. 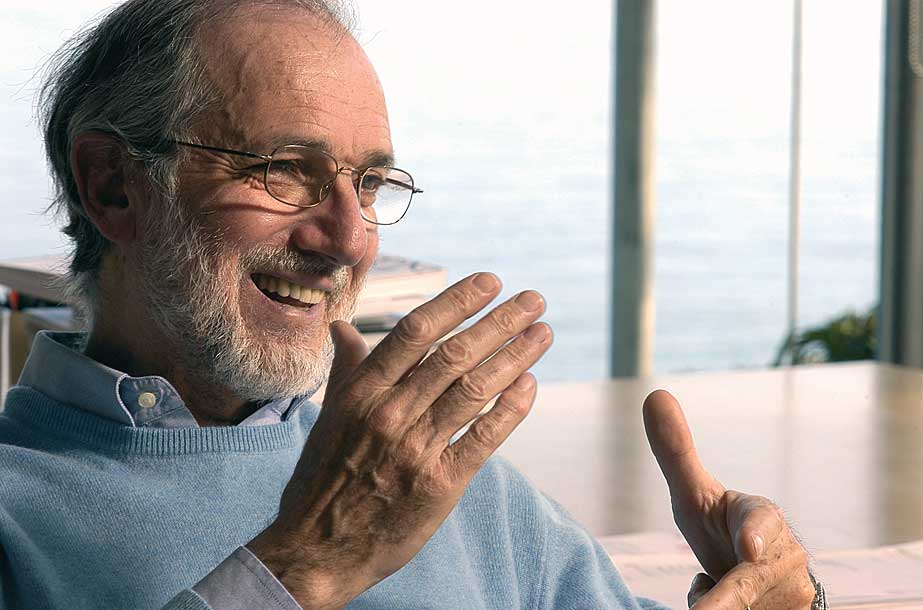 If you get there from Borough High Street, the vision you get is of an enormous yet light building that absorbs and reflects the light to the point of almost fading into the sky. This is the precise effect that Piano wanted to achieve, covering the building with high-tech glass panels to ensure clarity.  As he explains: “so it won’t look green like an empty wine bottle, or dark like a pair of sun glasses, but will reflect the weather and the colour of the sky”.

Furthermore, the skyscraper has an eco-soul and will be the pillar of an environmentally friendly and more sustainable city. “Humanism should be the central theme of the twenty-first century’s architecture,” says Piano, “the awareness that we are constructing buildings in a fragile world. Today’s buildings have to pulse with the breath of the earth. Therefore we must pay attention to where we place them, understand where the material comes from, predict what will happen in ten years’ time, when it would be recycled, consider the energy consumption. To combine all these aspects should not be seen as a painful process, but a source of inspiration to create a new language.”

The Shard will use the sun for heating and the wind for cooling. The top 15 floors are designed to be a radiator that will capture wind energy to cool the tower without using energy-consuming airconditioning equipment.  This will save up to 35% of the energy that would otherwise be required.

In addition, only 48 parking spaces are provided because the building sits adjacent to a railway station, two London tube stations and about 20 bus lines—ergo, we must give up the car for the sake of the air we breathe in the city where we live!

The project also includes renovation of the atrium of the railway station and the redevelopment of the area around the bus stop and taxi stands. The currently existing station roof will be replaced with a glass roof and small shops will be located along the connections between the platforms for taxis, the train station and buses.

The opening is scheduled for the summer of 2012. With its 310 metres divided into 87 levels, the Shard will be the tallest building not only in London, but in all of western Europe. 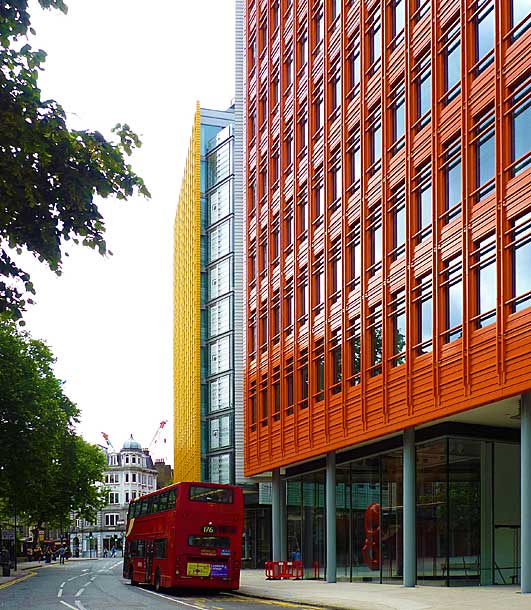 But London is not new to the beauty of Renzo Piano’s work.  In 2008, in St. Giles, in the hinterland behind Centrepoint, near Tottenham Court Road tube station, Piano brought vivid colours and dynamic shapes to revitalise a disharmonious and unkempt neighbourhood.

The new structure of Central St. Giles replaced a staid brick building, former headquarters of British intelligence. This was a very large project with over 39,000 square metres of offices, commercial units, eleven restaurants, and 109 apartments, 53 of which are subsidised housing.

The colour is the first thing that strikes you: cheerful facades painted buttery yellow, orange and green that glitter, sparkle, and twinkle. It makes you think of the sound boxes of the guitars that you can see from the windows of the nearby shops on Denmark Street.  The colours recall perfectly the Centre Pompidou in Paris, the building that 30 years ago marked an important turning point in the history of modern architecture and launched the career of the young architect Renzo Piano with Richard Rogers, his partner in that adventure.

As in Paris, here in London an original idea was needed to revitalise an entire neighborhood.  Just as in Paris, Renzo Piano, with his Italian craftsmanship, has been able to  reinvent an existing space, giving it a fluid relationship with the city.

“The colour adds surprise,” says Piano. ”It helps the fragmentation. I do not believe cities should be boring. Cities are a kind of miracle because they are full of surprises. The colour is the humour and the magic of it.” 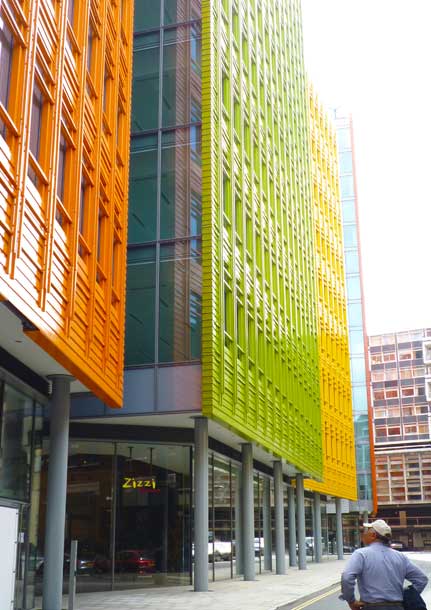 The context in which it stands has had a major impact on the design of the project. Central St. Giles is an impressive architectural sculpture, a combination of changing sides. The appearance of each facet is unique: different height, orientation, colour and relationship with natural light. Glass, steel and ceramics are the protagonists of this masterpiece. In each facade the ceramics assume different shades, designed with the utmost care to blend in with the surrounding buildings so as to fully integrate with all the existing urban texture.

It stands on a base of six-metre high transparent glass,  that stimulates the curiosity of passers-by, inviting you to enter.  The large and welcoming courtyard is 2,000 square metres with cafes and restaurants. It is a modern square designed for socialising, thus reinforcing the urban identity of the site.

“The building rises above the site on which it stands, leaning on transparent glass. I like the idea that the building does not take possession of the land in a selfish way, but talks with the streets,” says Piano.

Renzo Piano’s buildings not only bring great artistic value but they also represent a hopeful renaissance of London after the one of the worst financial world crises in history.  Mayor Boris Johnson calls the Shard a clear and illuminating example of confidence in the economy of London.

The world is changing, presenting new crises, but also opening new opportunities for development. The Shard, this designer piece of glass, will not be the last building to change the face of London. There will be others, perhaps more beautiful or not so beautiful.  But it’s just a matter of time until London, this old lady founded by the Romans, dramatically changes her face again.