Hungary’s capital is the only place to appreciate the true worship of coffee – the dark elixir has warmed the city’s heart for centuries, writes Elisabeth Molnar. 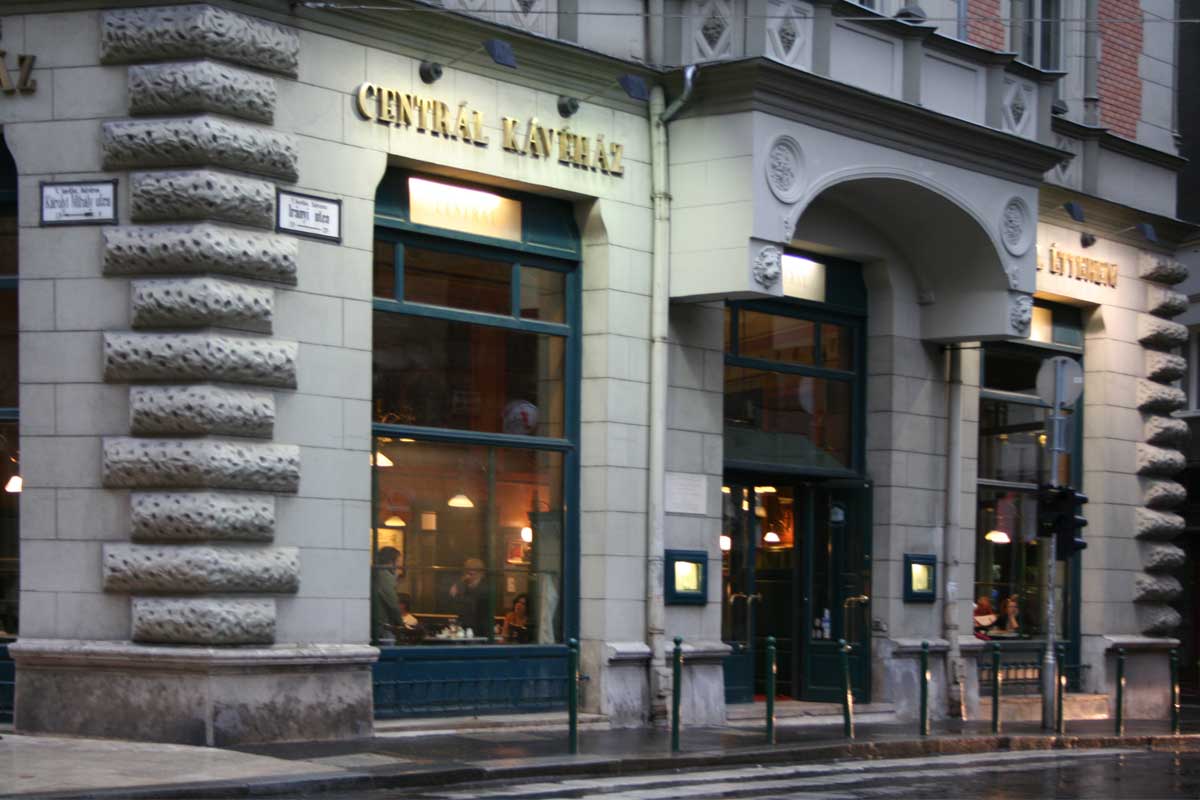 [three_fourth]Ask a Hungarian about his country’s extraordinary coffee culture, and all you will get is a puzzled look. So pervasive is the cult of this dark, digestion-defying drink, that its local devotees are blithely unselfconscious. And yet Budapest is renowned as a temple of coffee consumption.

Presumably it dates back to the 1500’s when the land was part of the Ottoman dominions, but it wasn’t until the nineteenth century that the coffee house tradition began to gather momentum.  Sándor Csukás made it the subject of a documentary Otthonod a Kávéház (The Coffee House Is Your Home). In it, Noémi Saly, explains that a large part of the attraction of the cafés was that they were well-lit and well-heated, while people’s homes were less so.  Smaller coffee shops would often offer a ‘poet’s breakfast’ for poverty-stricken writers: a cheap cup of the drink with a slice of bread. Such places became branded onto the national consciousness through the medium of verse: it was in a café, The Pilvax, that poet Sandor Petofi recited the Nemzeti Dal (the National Song) on March 15th, 1848. That date is still marked to celebrate the great uprising against the rule of the Habsburg empire.

Budapest’s coffee culture hit its peak in the early part of the twentieth century.  Hadik, Gerbeaud, New York, Bécsi – they were all well-known and well-frequented cafés.  Palatial triumphs of neo-Baroque architecture, with their towering ceilings and marble columns, many of the interiors of the surviving buildings are much the same today as they were then – albeit perhaps in need of a little restoration.  On a smaller scale but equally artistic and grandiose, were the exquisite cakes and pastries conjured from the kitchens. 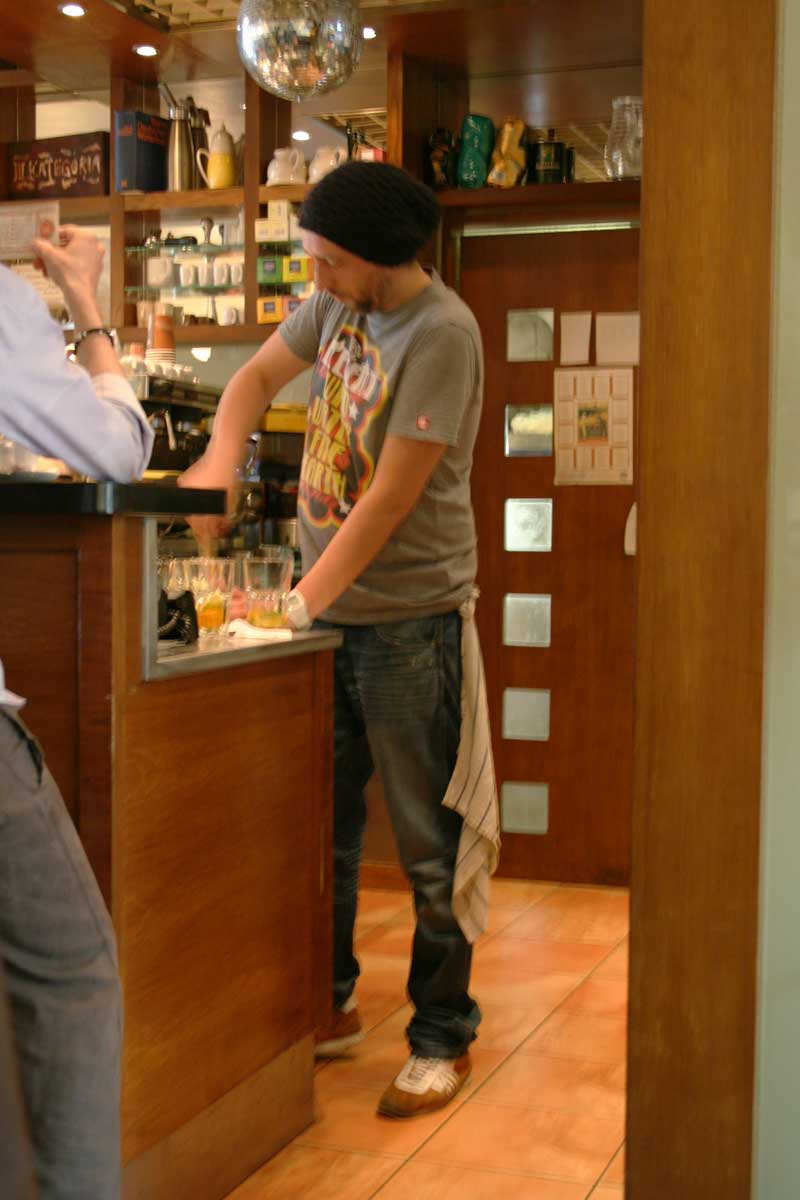 Coffee houses were at the focal points of political and literary communion. Illustrious writers would sit in them and socialise, or watch the world go by. The celebrated author Frigyes Karinthy had a favoured spot near the window in the Centrál café. One wonders, though which side of the fish-bowl he inhabited, since passers-by would observe him with similar intensity. In 1929, he penned Chain-links. The short story set out his thinking on network theory, including the idea that everyone is connected to everyone else by only a few ‘chain links.’ It’s a natural enough conclusion for anyone of his day observing how many connections there were between the people in the Budapest coffee places. There is a well-worn (possibly apocryphal) anecdote that he started a rumour in a coffee joint in Buda, and witnessed its re-telling an hour and a half later across town in Pest.

The Second World War interrupted the coffee party to a large degree. Many of the great cafés were destroyed.  The subsequent Communist regime suppressed much of the social gathering by shutting many of the remaining coffee houses. Even the ones that survived such repression weren’t especially safe to sit in. There’s an old Hungarian joke: three men are sitting in a Budapest café in the 1950s; one sighs,  “Oh…”  the second one sighs, “Ah…”  the third pipes up in a fierce whisper, “Gentlemen! We must stop talking politics or someone will hear us!”
Even Communism’s distaste for the bitter beverage couldn’t suppress the Hungarian love of coffee.  The social event simply moved to people’s houses. “When you invite someone over to your house, you offer them coffee,” say Ági Mógor, a Budapest film maker. “Under communism, there was so little of everything that coffee was the one thing that everyone had.  It was a way of life; a mandatory part of daily life.”  Even poorer households would have a small Moka stovetop coffee-maker. I remember my grandmother turning out her little machine daily in her Pest apartment.

After democracy was established in the early 1990s, Budapest coffee culture began to return, but never appeared in quite the same form. A few of the grand coffee palaces remained, but smaller, more down-to-earth cafés appeared in greater numbers. Art and music flourished once more in cellar cafés. New eccentric places were born, in which one can still play cards and gossip.  In 2002, Mógor made a short film to immortalise her coffee experience: she filmed a group of her friends sitting in a Budapest coffee shop.  The whole endeavour cost about 4,000 forint (£13), the only expense being the cost of the coffee.  The atmosphere captured in the film is typical of the current coffee scene: sociable, very casual, with free and intimate dialogue.  And yet, despite being so ingrained, there’s no formality as, say, in Italy. Mógor talks of a trip to Bologna: “My three friends and I ordered four coffees and a bottle of wine in a café.  The waiter looked at us and said, “But where are the others?”, imagining that there would be more people on the way to drink the wine.  Upon discovering that we four barbarians intended to drink the coffee and the wine on the same occasion, the poor waiter actually got down on his knees and begged us not to drink them in such a way.”

In Budapest you can buy a good cup of the stimulant anywhere, not just in cafés and restaurants, but in patisseries, museums, theatres, even cinemas.  So thick does it run through Hungary’s veins that suggesting a coffee in the vernacular can mean any form of meeting up, even ones devoid of hot liquid refreshment.  Yet coffee-vending venues remain the epicentre of Hungarian creativity.  They serve as bastions of free thought and free speech, luxuries that are not taken for granted in a post-Communist state. Great moments of history have passed under the view of the high ceilings, as well as small moments, meaningless to the world but filled with the little dramas and passions of our day-to-day existence.  The walls of the cafés in Budapest don’t need to speak; the people speak for themselves.  And if you want to know what they say, well… I’ll tell you over a coffee.[/three_fourth]